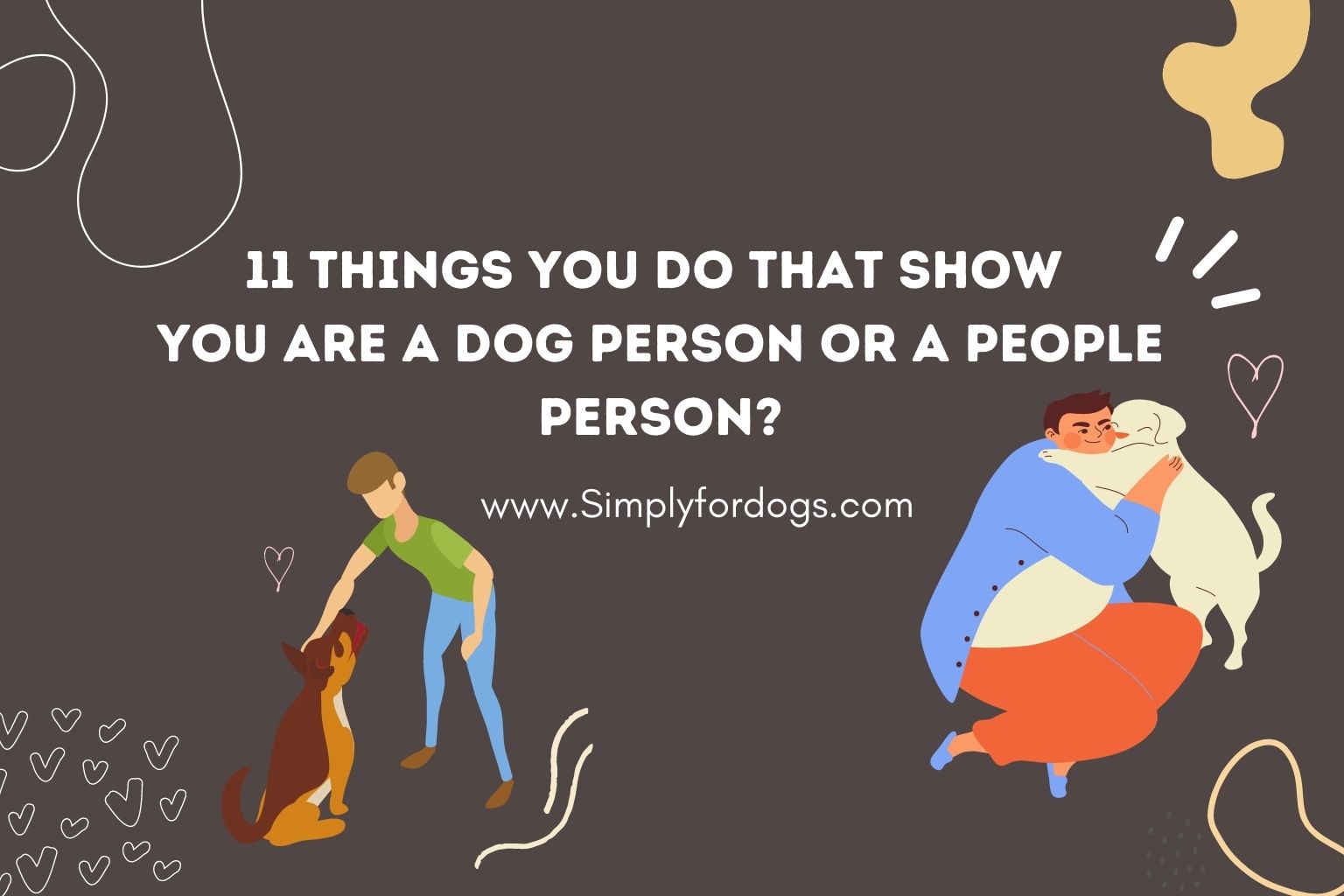 It’s a well-known fact that there are two types of people in the world: dog people and cat people. Dog people are considered to be more extroverted, friendly, and agreeable than their feline counterparts, who are typically seen as more independent, creative and intelligent. So which one are you?

Today, we’ll be exploring the differences between these two types of people and see if we can figure out which category you fall into.

What Are the Characteristics of a Dog Person?

People who classify themselves as dog people generally enjoy the company of others and are always up for a good time. They’re typically friendly, outgoing, and agreeable, and they love spending time with their furry friends.

Dogs tend to be known for being loyal and protective of their family, which is something that many dog people admire. In addition, these types of people tend to be highly social and enjoy spending time with their friends and family.

They’re typically optimistic, extroverted, and energetic, making them a lot of fun. Plus, they’re often seen as the “life of the party,” making them a great choice for anyone looking to add some extra excitement to their social gatherings.

Do Dogs Pick a Favorite Person?

Some dog people believe that dogs are capable of picking a favorite person, and science is starting to back this up. For example, studies have shown that dogs tend to be more affectionate and attentive towards people they perceive to be the “alpha” of their group, whether that be a family or a group of friends.

So, if you’re the type of person who likes to be in charge and take charge of situations, there’s a good chance that your dog sees you as their favorite.

If you think you’re a dog person, you probably have a lot of positive qualities that make you who you are. But what about cat people?

What Are the Characteristics of a Cat Person?

People who classify themselves as cat people generally enjoy the company of others and are always up for a good time. They’re typically independent, creative, and intelligent, and they love spending time with their furry friends.

Cat people are known for being independent and self-sufficient, which is something that many cat people admire.

These types of people tend to be highly independent and enjoy spending time alone or with just a few close friends. In addition, they’re typically introverted, creative, and intelligent, which makes them a great choice for anyone looking to add some extra depth to their social gatherings.

If you think you’re a cat person, you probably have a lot of positive qualities that make you who you are. But which one are you?

There are a few key differences between dog owners and cat owners that we should mention. First, as we just mentioned, a dog person is typically more extroverted, friendly, and agreeable than cat people. They’re also more likely to be loyal and protective of their family, which is something that many people admire.

On the other hand, a cat person tends to be more independent and creative than their canine counterparts. In addition, they’re often seen as more intelligent and introverted, which makes them a great choice for anyone looking to add some extra depth to their social gatherings.

Additionally, they’re known for being self-sufficient and able to take care of themselves, which many people admire about cats.

So, which one are you? A dog person or a cat person? There’s no right or wrong answer, of course. It’s simply a matter of preference – to prefer dogs or cats

How Can You Tell if You’re a Dog or Cat Person?

It might sound like a simple question, but there really is no easy answer. For example, some people simply prefer the company of one type of animal over another, while their personality traits may more define others.

Generally speaking, dog people are considered to be more extroverted, friendly, and agreeable than their feline counterparts. On other hand, cat people tended to be often viewed as more independent, creative, and intelligent.

So which one are you? Do you love cats or dogs? What are your pet preferences, And what factors might contribute to your preference for one type of animal over another?

Below is a quiz to help you find out which category you fall into. Simply answer each question as honestly as possible to get to know – you’re a cat person or a dog person.

1. How Do You Prefer to Spend Your Free Time?

2. Do You Consider Yourself to Be More Extroverted or Introverted?

3. Are You Typically an Organized and Disciplined Person or a Bit More Laid-back and Spontaneous?

4. How Would Your Friends and Family Describe You?

5. Which Type of Animal Do You Find Most Appealing?

If you answered mostly A’s, you’re probably a dog person. A dog person is typically seen as friendly, outgoing, and social. He enjoys spending time with others and often prefers activities that involve being active and outdoors. In addition, he tends to be loyal and reliable friends and makes great companions.

If you answered mostly B’s, you’re more likely a cat person. A cat, a person, is often independent and introspective. He can be creative and intelligent and sometimes prefer to spend time alone or in smaller groups. Cats have long been revered in many cultures for their grace and beauty.

No matter whether you prefer to be a cat person or a dog person, one thing is certain: both dogs and cats make great pets. Whether you want your furry friend to be a dog or a cat, the important thing is to choose an animal that suits your personality and lifestyle.

Which One Is Better- the Dog Person or the Cat Person?

That’s a tough question to answer, as there are pros and cons to both types of animal companions. Some people simply prefer one type over the other, while others may be more defined by their personality traits.

At the end of the day, both dog and cat people make great companions, and whether you’re a dog or cat person doesn’t really matter. Most importantly, you choose an animal that best suits your personality and lifestyle.

To summarize, both dogs and cats people have their own unique pet set of personalities that make them great companions. So, if you’re wondering whether you’re a dog person or a cat person, ask yourself how you prefer to spend your free time?

Do You Have to Be One or the Other, or Can You Like Both Animals?

Many people believe that you have to be one or the other- a dog owner or a cat owner. But that’s not entirely true. You can like both animals, and there’s no reason why you can’t have both dog ownership and cat ownership as pets.

An online survey shows that 60% of respondents were dog people, while only 11% identified as cat people. The remaining 29% of pet owners said they liked both animals equally or didn’t have a preference.

Dog People and Cat People – They Really Are Different!
Are You More of a Dog Person Than a People Person? Statistics Say You Probably Are!
What Kind of Person Doesn’t Want a Dog?

Dogs have been known as “man’s best friend” for centuries, and it seems that this saying may ring true, at least when it comes to personality. Dog people are typically seen as more extroverted and agreeable than cat people, who are often perceived as being more independent and intelligent. So, which one are you? Are you a dog person or a cat person?