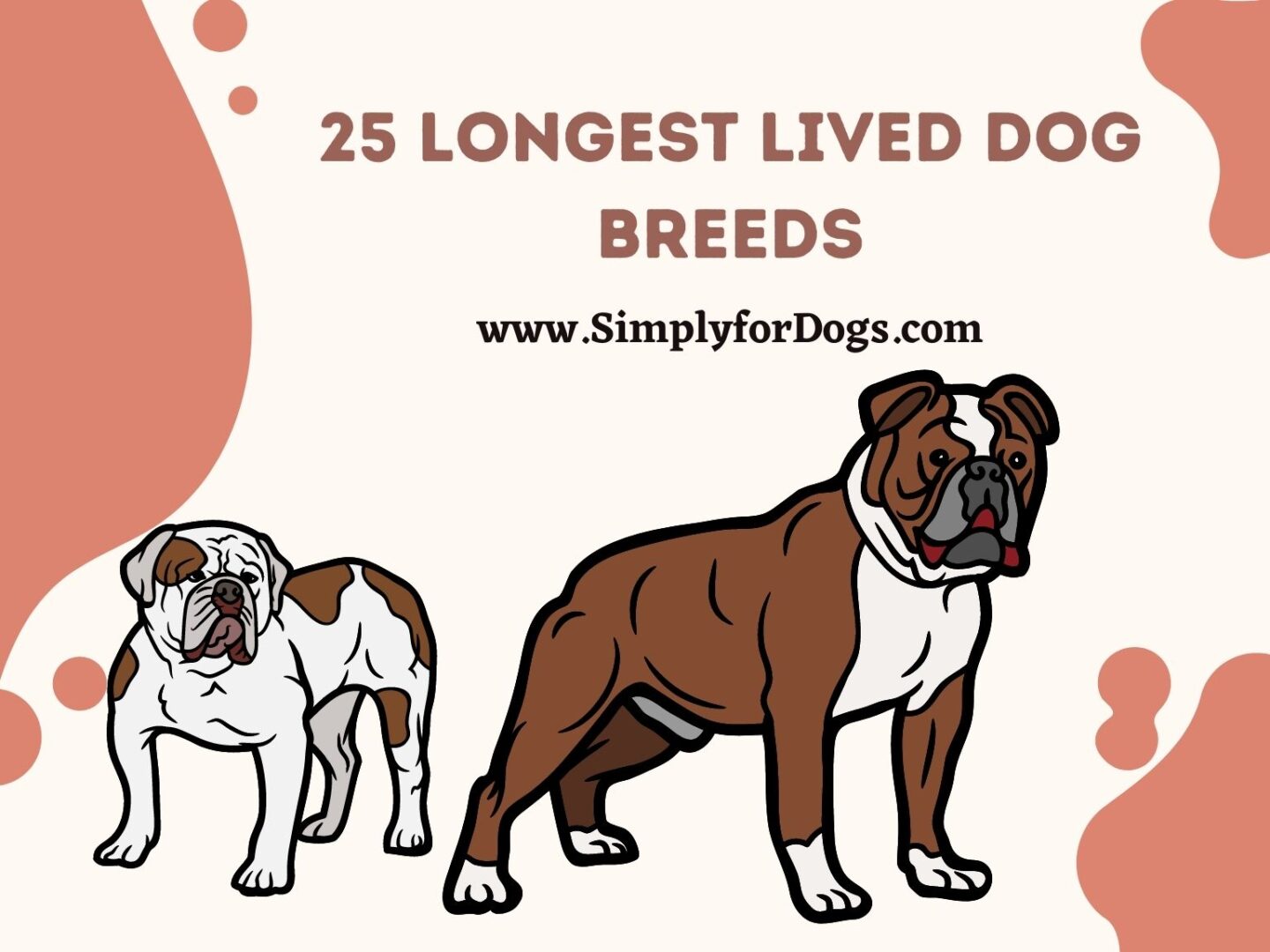 Dogs are amazing creatures. They are loyal, and loving, and provide us with so much joy. But one of the best things about dogs is that they have a long lifespan. In fact, there are many dog breeds that can live for up to 25 years or more! In this blog post, we will list 25 of the longest-lived dog breeds in the world.

Toy poodles typically live between 12 and 15 years. That’s a pretty good run for such a smallest dog breed, and they are known for being generally healthy compared to other dogs breed their size. These dogs were originally bred in Germany as companions for nobility, and they still make great lapdogs today. If you’re looking for tiny dogs without health issues that will be a devoted friend for many years, the toy poodle is a good choice with good average life span..

The Jack Russell Terrier is a small, compact and fearless terrier. They were originally bred in England to hunt foxes, and they still have that hunting instinct today. Jack Russells are intelligent, energetic and playful dogs that need a lot of exercise. While most Jack Russells have average life expectancy between 13 and 16 years, some have been known to reach 20 years or more.

Shih tzu is a small, lively dog that was originally bred in China. They are one of the oldest breeds of dogs, and have been around for over two thousand years. Shih tzu are known for their long life spans, and often live to be well over fifteen years old. The average life expectancy of this breed is eighteen years.

Cocker spaniel is a breed of gun dog and one of the oldest breeds in existence. The breed is native to England, where it was used as a hunting dog. Cocker spaniels are small dogs with long ears and silky coats. They are friendly and outgoing, making them excellent companion dogs. The average life expectancy of Cocker spaniels is 12-15 years, though some have been known to live 20+ years.

The Toy Manchester Terrier is a small species of dog. They are the smallest of the three types of Manchester Terriers. The other two types are the Standard and the Miniature. Toy Manchester Terriers weigh between four and six pounds and stand about twelve inches tall at the shoulder. The life expectancy of this generally a healthy breed is fifteen to seventeen years, which makes them one of the longest-lived dog breeds.

New Guinea singing dog is a breed of dog native to the island of New Guinea. The breed is one of the oldest and rarest in the world, and is thought to be descended from the first dogs brought to New Guinea by Austronesian peoples about 32,000 years ago.

The life expectancy of New Guinea singing dog is 12-15 years. However, there are reports of individual dogs living to 20 years or more.

Lhasa apso is one of the longest-lived dog breeds, with a life expectancy of 20 years. This Lhasa apso breed is known for its shaggy coat, which needs to be brushed regularly to prevent mats and tangles. Lhasa apsos are loyal and affectionate dogs that make great companions.

Yorkshire terriers, or Yorkies, are one of the longest-lived dog breeds. The life expectancy is between 12 and 20 years old. Yorkies are also relatively small dogs, weighing in at only around seven pounds. Despite their small size, they are known for being very active and playful.

The bichon frise is a small, white dog breed with life expectancy of around 12 to 15 years. The breed is known for its friendly and playful personality, and makes a great companion dog. Bichon frises are also relatively easy to train and are good with children. If you’re looking for a small dog breed that will bring you years of companionship, the bichon frise may be the perfect choice for you!

The Beagle is a small to medium-sized dog breed. They are known for their great sense of smell and tracking ability, making them popular hunting dogs. Beagles have also been bred for other roles, such as drug detection dogs and as therapy dogs. The average lifespan of a Beagle is 12-15 years.

Maltese live an average of 12 to 15 years. They are a small breed, weighing only four to seven pounds as adults. Maltese are gentle, playful dogs that make great companions for people of all ages.

Maltese do not require a lot of exercises, but they do need plenty of mental stimulation and daily human interaction because these are curious dogs. Females of this dog breed tend to live one year more on average lifespan. Maltese are also known for being quite vocal, so be prepared for lots of barking if you adopt one!

Maltipoo is one of the longest-lived dog breeds. The life expectancyof a Maltipoo is 12 to 15 years. Maltipoos are a cross between a Maltese and a Poodle. They are known for their hypoallergenic coat, which does not shed. Maltipoos are intelligent and easily trained dogs. They are good with children and a maltipoo makes great family pet. The dog remains healthy if cared properly and avoids carrying excess weight.

Dachshunds are one of the longest-lived dog breeds, with life expectancy of 12 to 16 years. They are a small breed,generally healthy, weighing between 11 and 32 pounds, and are known for their long bodies and short legs. Dachshunds were originally bred in Germany in the 1600s to hunt badgers.

The fox terrier is a breed of dog that has been around for centuries. They are known for their loyalty and affectionate nature, and they make great companions. These generally healthy tiny dogs tend to have a life expectancy 12-15 years, but some have been known to live even longer. These do not have shorten average life spans.

Golden Retriever is one of the longest-lived dog breeds.

According to a study done by the University of Guelph in Ontario, Golden Retrievers have an average life expectancy of 11 years. But some individual dogs have been known to live much longer – with average life span up to 16 years or more. So if you’re looking for a canine companion that will be with you for many years to come, a Golden Retriever may be the perfect choice!

Cardigan Welsh corgi typically lives 12-15 years. The breed is known for being active and playful, but also affectionate and loyal. They make great family pets and are relatively easy to train. If you’re looking for a dog that will be a part of your family for many years, a Cardigan Welsh corgi may be the perfect breed for you!

Shiba Inu is a dog breed that originated in Japan. The name “Shiba Inu” means “brushwood dog”, and refers to the Japanese brushwood trees that the breed was originally used to hunt in. Shiba Inus are considered to be one of the oldest breeds of dogs than other pets, and they were first brought to America in 1954. The average life span of a Shiba Inu is 12-15 years.

Afghan hounds have an average life expectancy of 12 to 16 years. The oldest documented Afghan hound was 27 years old. Afghan hounds are known for their independent nature and can be aloof with strangers. They require a lot of exercises and need to be brushed several times a week to prevent matting. Afghan hounds are not recommended for first-time dog owners.

The Pomeranian is a small Spitz breed of dog. The name “Pomerania” refers to a region in Central Europe. The breed has been referred to as the Zwergspitz, Dwarfschäferhund, or Pom and is sometimes called the toy German spitz. Pomeranians have an average lifespan between 12 to 16 years. Some have been known to live as long as 20 years. The oldest recorded Pomeranian was a dog named “Trouble” who lived to be 21 years old.

The Australian terrier is a small, sturdy breed of dog that was originally bred in Australia for hunting. These dogs are known for their loyalty and affectionate nature, and they make great companion animals. Australian terriers have average longest life spans between 12 and 15 years old, making them one of the longest-lived dog breeds.