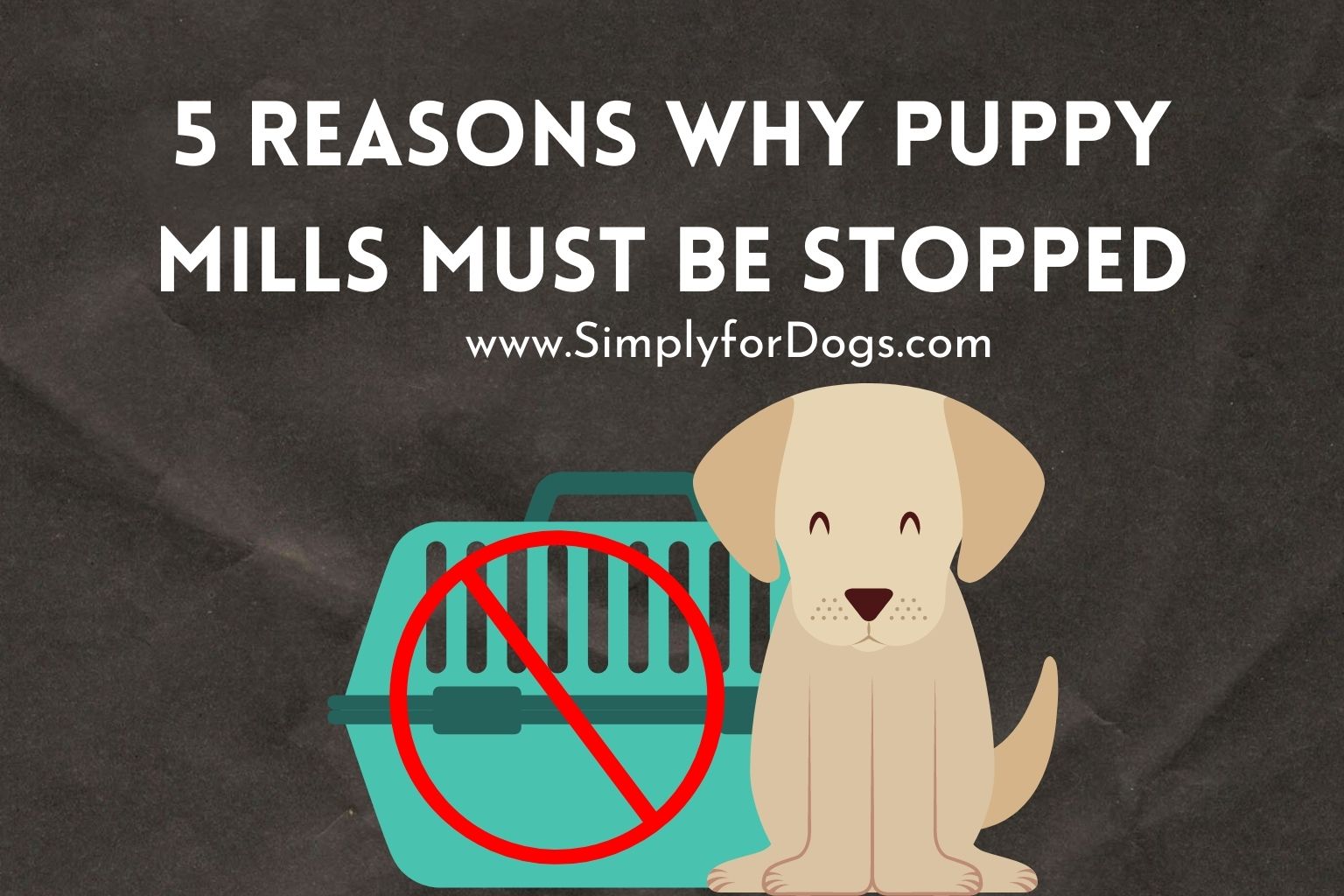 I’ve pointed out the perils of buying a puppy from pet stores and online advertisers previously, and talked about puppy mills a bit in How to Get the Right Dog from the Right Breeder. The US Humane Society estimates that there are at least 10,000 puppy mills operating in the United States selling directly to the public, or through flea markets, pet stores and other avenues. These operations have no concept of how to raise animals carefully and treat them respectfully, and that in and of itself is reason to want to see puppy mills shut down and harsh penalties imposed on those who are operating them.

Let’s get one thing straight from the outset: most breeders love their dogs and want only what’s best for them. This includes, much of the time, those who are tarred with the pejorative term “backyard breeder.” AKC members in particular seem to like to use this term to refer to any breeder who is not breeding registered stock, the implication being that such breeders are doing something wrong and ought not to be permitted to breed their animals.

The fact is, though, that there are many “backyard breeders” from whom you can obtain purebred (but not registered) dogs that are often just as beautiful and healthy as AKC show dogs. Also, many of those breeders are every bit as knowledgeable as AKC members – some are even more so. The error lies in assuming that breeders of non-registered animals are unscrupulous or ignorant, and that anyone breeding registered dogs is, by definition, honest and knowledgeable.

I want to take back the term “backyard breeder” and use it as simple shorthand for “breeder of purebred but unregistered dogs.” In this context, a backyard breeder is far, far removed from puppy mill operators, who are simply operating a ranch for puppy production, often in conditions that would break the heart of even the most jaded person.

Now, with that lengthy introduction out of the way, let’s take a look at the 5 reasons why puppy mills must be stopped.

1. Puppy Mills Cause Physical Harm to Adult Dogs and Their Offspring

A puppy mill is basically a poorly run ranch that is in operation solely to produce as many puppies as possible, in as little time as possible, at as little expense as possible. The ranchers operate with little or no concern for the health of the breeding stock and even less for that of the puppies. Much of the time, puppies die shortly after birth, and that’s a bit upsetting to the puppy mill operator, but there will be other litters. The best case scenario for these callous people is that the puppy lives long enough to get to the pet store to be sold, or to be sold directly to a customer. If the puppy dies a few weeks after it’s purchased, or ends up having health problems throughout its life, that’s of no consequence to the operator. The heartbreak experienced by the family that bought the puppy isn’t the puppy rancher’s issue. And if the puppy does live but ends up draining the family finances with constant vet bills, that’s not their issue either.

There have also been instances of puppies being sold with diseases or parasites that could be transferred to people. Children, the elderly, and anyone else with a suppressed immune system can actually become ill if they are in contact with such a puppy.

As to the breeding stock, it’s very rare that they get any veterinary care. This is because it’s so much cheaper to just replace your breeding stock if it becomes ill.  After all, you want to keep your cost of doing business as low as possible. Ill dogs can end up being killed, not euthanized by a vet, because that would cost money, but hey, there are other ways to do away with a dog. Or, you could just let it starve to death.

Even when puppy mill operators are discovered and called to account, there is still no happy ending. The dogs that are rescued from these operations are often so physically damaged that they need major veterinary intervention to alleviate their suffering. Often, they end up being euthanized.

2. Puppy Mills Cause Mental Harm to Adult Dogs and Their Offspring

Puppy mill animals have no human socialization or contact with other dogs (except when it’s time for breeding). Puppies are taken from their mothers too quickly (often at as soon as four weeks). After all, the breeder doesn’t want to have to spend money on solid food for the litter. This is appallingly detrimental to a puppy’s socialization; puppies need at least eight weeks to learn how to “be dogs,” and they learn this from both their mother and their littermates.

The puppies also get no human contact or handling, both of which are so crucial to creating a human/dog bond. Puppies who are kept in such conditions and taken away too soon can develop serious socialization problems like destructiveness, anxiety and even aggression. These behaviors can be very difficult to overcome, even with a great deal of training. Many puppy mill animals are never able to really bond to humans.

3. The Conditions in Puppy Mills Are Horrific

Breeding bitches at these ranches are used just for breeding, and are usually kept in out-buildings (or worse, outdoor pens with no protection from the elements). Many of them never see daylight, or know the feeling of having their feet touch grass. They become so physically ill and mentally depressed that they are not able to provide their puppies with the socialization skills they need. They end up raising puppies who are emotionally stunted, and have no idea how to relate to humans or other dogs.

Breeding males are no better off. The conditions are essentially the same, and the males develop serious mental health issues because of lack of stimulation and human contact.

Breeding animals of both sexes are kept alive only as long as they are producing litters. When they are no longer useful as breeding stock, they end up being gassed, shot, electrocuted, drowned, or simply starved. Those that live and are rescued frequently die from medical conditions that, under normal circumstances, would have been treatable.

I think it’s probably safe to say that most people would not buy a puppy that came from a puppy mill if they actually knew its origin. Although I am put in mind of someone I knew (I wouldn’t exactly call him a friend) who was shopping for a dog, and happened upon a Craigslist ad. He actually visited the breeder (which is rare when it comes to puppy mills, since they don’t usually want you to see what they’re doing), and once he found out that he couldn’t see the puppy’s parents, and looked at the dozens of puppies in substandard conditions, he was pretty sure that he was looking at a puppy mill. He still bought a puppy, his reasoning being that at least he was able to save one.

I probably don’t have to tell you that this is flawed reasoning. Maybe he saved that one, but in doing so, he helped to keep the puppy mill operating. When puppies are bought, more puppies must be born.

So, people don’t usually buy directly from puppy mills. But when they buy from flea markets, yard sales, pet stores, or by responding to newspaper or online ads, the chances are very good that they’re buying for a puppy mill.

I have had two litters from Janice and Leroy, and it would never even have entered my mind to place any of the puppies in a pet store. I don’t believe that any responsible breeder ever would, because when you do that, you have no control at all over who buys the puppies. Don’t let the “upscale” pet stores fool you, either – they’re still buying their puppies from puppy mills, or from the brokers who work for the puppy mills.

Anyone who buys a puppy without being able to see the breeding facility, and without being able to view the parents (or at least the mother) is simply setting themselves up for potential problems. No matter what pet store staff tell you, chances are that they don’t know much about the breeding, or if there are any issues that might affect the puppy’s health. And yet people continue to buy puppies from pet stores, because they don’t know any better.

Another way that people unwittingly support puppy mills is by buying from con artists who are actually working for puppy mills. These men and women are hired by puppy mills to act as “middle men.” They often pose as shelter operators or rescue workers, and might even take the mother and the litter to their home for a few hours so that the prospective buyer can see his or her puppy in a pleasant, homey environment. This is a con that can be pretty hard to detect, since buyers have no reason to think that they’re not looking at the actual place where the puppies were born and raised. One tip-off, though, can be checking the bitch’s feet. If they’re unusually soft, she’s had no outdoor exercise, and that’s a fairly reliable sign that she’s a puppy mill animal.

The US Humane Society estimates that of the 4-5 million dogs that are euthanized every year in the United States, only about 5% are put to sleep because of medical issues. So why are so many dogs dying? It’s simple; it’s because we have too many dogs and not enough people to take care of them. We don’t need puppy mills breeding thousands and thousands of dogs each year to add to the problem. The more puppies they breed, the more end up in shelters due to behavioral issues caused by poor socialization.

It has been estimated by the Humane Society of the United States that an average of four to five-million dogs are put down every year and only 5% of those for medical reasons. That’s beyond euthanasia; it’s carnage, plain and simple. And why does it happen? It happens because there are too many dogs and not enough homes to care for them. It should be obvious that something we definitely don’t need in our country is puppy mills that breed more than enough puppies in any given year to further exacerbate what is already an overwhelming overpopulation problem. The more puppies they breed, and the more puppies the unsuspecting public buys, the more dogs will end up in shelters.

Puppy mills cause unspeakable harm. They hurt adult dogs, they hurt puppies, and they hurt the people who end up buying those poorly socialized, unhealthy puppies. In fact, they can end up hurting anyone who comes in contact with a dog that becomes mentally unstable or aggressive because of its early life.

So, what can we do? I’ve written to my congressman to ask him to work toward tougher laws and harsher penalties when it comes to puppy mill operators. We need effective legislation, and we also need public education to combat this evil. I also take out little ads in free classifieds – things like “Don’t buy a puppy if you can’t see the parents and the kennel. Visit http://www.humanesociety.org/news/publications/whitepapers/puppy-mill-research.html to learn the truth about puppy mills.” I talk to people in pet stores, at flea markets and yard sales, and anywhere else that puppies are being sold.

Maybe my efforts are just a drop in the bucket, but if we all do something – anything at all – maybe someday we will actually be able to live in a country where puppy mills are dragged into the open and not allowed to flourish. And that would be a very good thing for everyone concerned.