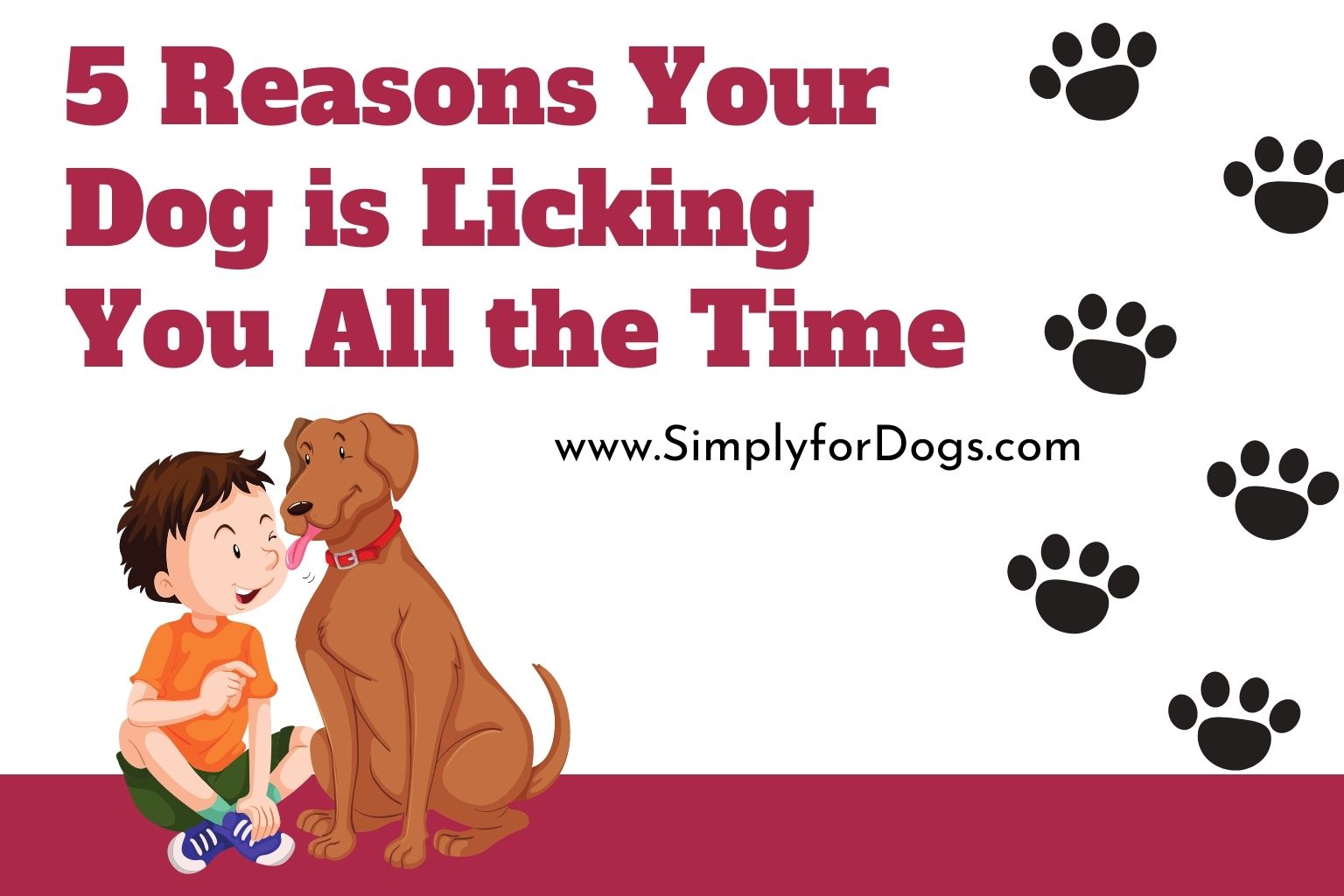 As my regular readers might recall (from an article about adult dogs chewing on human feet), my Leroy is a mouthy guy. He licks and chews, and I even had to break him of the habit of nipping and gnawing my feet. For him, it was puppy playfulness that spilled over into an adult habit. It took a bit of time to train him to knock it off, but today my feet are Leroy-free zones.

Yet, I get asked by a lot of people about licking, i.e. “Ash, why the heck does my dog lick my arms all of the time?” or “Hey, Ash, is it weird that my dog always licks me when he’s done something naughty?” In the past, I’ve tried to answer those types of questions by writing about dogs and their oral fixation issues. However, there are huge differences between oral fixations and most instances of licking.

Is it a Fixation or a Form of Communication?

Oral fixations are mysterious patterns that emerge in many dogs, and usually for any number of reasons. The fixations can include licking, but they might also involve chewing on the tail, feet or even sucking on hair (similar to nursing). The causes for the behaviors can also be unique, and one of the first things I suggest whenever someone asks me about excessive or constant licking and other oral fixations is this: Did you get the dog checked at the vet?

Why that particular question? Whenever a dog’s behavior is repetitive, you will always want to have medical issues ruled out of the equation. For instance, the dog that seems to suddenly become orally fixated on their feet may have actually injured those feet. If left to their own devices, dogs can “worry” injury to the point of infection or further harm.

Once any and all medical issues are ruled out, you then have to consider the other issues that might be leading to an oral fixation, i.e. anxiety, boredom, loneliness, and so on.

Though I am never sure about the so-called “dog experts” and “whisperers” since they so often create universal rules about all dogs’ behaviors, I did watch one episode of Cesar Milan’s TV show that perfectly illustrated oral fixation and its non-medical cause. In that episode, a dog was left in the family’s enormous garage during the day. With some toys, water and food, as well as bedding, it would seem that the dog should be content. However, the dog began to chase and catch its own tail, biting down so intensely as to spray blood everywhere.

Milan immediately diagnosed the issue – boredom that led to oral fixation. His solution was to give the dog a backpack. I know, it seems crazy, but here’s the thing, it worked. The dog’s backpack wearing sessions led it to believe it had a job and mission. Once the work was done, the dog could rest easily. Within days, the oral fixation was gone.

So, if your dog seems to have developed compulsive behaviors for no reason, look again. They might not lick, chew or bite themselves, and instead destroy things with their mouths and paws, but the issue is cued by the same triggers. That means you need to desensitize and counter condition – i.e. reward your dog for desired behaviors, distract them, and provide a new focus.

This can be as simple as giving a dog more exercise, playing games, giving them a job and helping to change their reaction to whatever it is causing that oral fixation, i.e. making them wear a pack for an hour or two each day and then taking it off to tell them “job done! you can chill out!”

But, that brings us back to the “why is my dog licking me so much?” concerns. And for many dogs it is not an oral fixation but any number of other factors at work.Interestingly enough, most of those triggers for licking should not be seen as bad, negative or in need of retraining. In fact, there are five common reasons your dog may lick you and be entirely without oral fixations as they do.

Lick Granuloma in Dogs (Video)
7 Reasons Why Your Dog Licks His Paws (Video)
Help, My Dog Is Chewing My Feet!

For the most part, that licking is meant to communicate something. Since dogs do not have spoken language, they use gestures, body language and some sound (barking, whining, etc.) to transmit information. Those tactics vary when the communication is canine to canine and canine to human, but it is helpful to understand it all. It lets you know that you should just accept the licking as part of your dog’s speech patterns, so to speak, and never scold or try to recondition the dog to stop licking. Shut off that stream of communication, and you might see your dog develop an oral fixation or truly unwelcome behavior!

The Five Common Reasons Your Dog Licks You…and Perhaps Everyone Else, Too!

Okay, I am going to relent a bit here on the “don’t yell at a dog for licking” concept. The reasons they lick are important, and the fact that it is typically communication is important, too. However, it can be very tiresome for a dog to lick your bare feet for an hour a day, and a recent story about a dog’s licking causing a man to develop a blood infection that led to the loss of all four limbs may make you hesitate to allow free-range licking.

If you do want to have your dog tone it down a bit, I’ll give you some pointers for reinforcing alternative behaviors at the end of the list. Now, if you are ready to figure out why your dog licks YOU so much, just read on…

If your puppy spent its first months of life under the watchful and loving eye of a canine mother, that puppy was given a lot of physical care, and much of it revolved around licking. Bathing, soothing, and affection came in the form of licking, and that dog is now passing on these same signs of affection through licking. It is classic association and begins with many dogs’ first breaths. A newborn pup is often cued to begin breathing by receiving licks from its mother, and so your dog has only the best memories associated with licking. If this is the reason, it is only a good thing!

This is the type of licking that does not last for long stretches of time. As an example of this, my beautiful Janice often hops up alongside me on the sofa, puts her irresistible face close to mine, and then licks my cheek or bends down and gives my arm a few gentle laps. She then does “the spin” and settles into a cozy position on the cushion next to mine. That is the sort of lick inspired by her mother’s loving licks, and she’s just paying it forward.

As the experts at Animal Planet note, “In the wild…the more subordinate members of a pack will lick the more dominant members and that’s important in maintaining pack harmony.” By licking you, your dog is letting you know that you are indeed the alpha, the leader of the pack. You can gauge whether or not this is what your dog is hoping to communicate by also watching their body language.

As another expert indicated, “The dog doing the licking usually lowers its body to make itself smaller, and looks up, adding to the effect of subordinate behavior.”

They don’t do this constantly, though, and it is often used by dogs when the message is crucial. For example, one of my friends asked me about their dog licking them when the dog’s been naughty. This is the submission licking, as if the dog is saying, “Oh, I know what I did was bad! I know you are the head of the household! I’m so, SO sorry!”

Yet, you can also see this when two dogs live in the same home and only one makes a habit of licking the other’s ears or face. That is showing you that the recipient of the licks is viewed as your #2 or right-hand pup. This dog sits high and never returns the favor, indicating a superior social status.

I know it is an ugly truth, but that is dog psychology. If your dog licks you for a few minutes each day, it is simply saying that you are the boss, and that they are fine with it!

Keep in mind that you may unconsciously encourage these shows of submission by encouragement or positive reinforcement. The dog submits by licking you as you sit together every evening. You translate this as a sign of love (rather than your own dominant position) and give the dog physical affection in return, such as some scratches and rubs or even a hug. The dog sees this as cementing his or her position, and this feels good to them emotionally. It’s all positive and you probably don’t want to scold or discourage these daily affirmations your dog is able to receive.

No, your dog is not licking you in order to tenderize you (though, the saltiness of human skin is often appealing to many dogs’ palettes!), but is probably repeating a pattern from their earliest memories. As puppies, many dogs lick at their mother’s snouts when they are hungry. (Warning: If you are made queasy by vomit stories you may want to skip the next sentence or two!) In the wild and in some domestic settings, puppies cue their mothers to regurgitate by learning to lick their snouts and mouths. Experts believe this evolved out of early dogs being able to more easily “transport” food by eating and regurgitating rather than hauling dead carcasses back to their dens.

Interestingly enough, that ancient instinct is not so easily erased from modern, domesticated psyches, and many dogs go for the face of their “mother” or alpha to express a bit of an appetite. If you have inadvertently reinforced this by giving them treats after face licks, you can be fairly sure that many facial licks are simple requests for a quick snack or even a meal.

Naturally, the hunger licking is a means of getting your full attention, and that too can become a reason for licking – particularly if you give it positive reinforcement with treats or with some loving playtime.

In an honest-to-God gesture of ultimate goodwill, your dog may lick you for a longer stretch of time because they detect something unsavory on your person, or even something they like. As an example, dogs enjoy licking us when we are sweaty and salty (ick!) because it tastes good, but Janice likes the taste of my all-natural lotion (I make it myself). I have to avoid her for a bit of time after I slather it on my limbs or she begins trying to lap it off! Yet, let me have something funky on me, and both dogs try to groom me and get me clean.

And if you don’t want so much of the licking? You just need to create a somewhat different response to the cues that cause the licking. Simple dog training logic says you should ignore licking if you want it to stop. The ignored behavior is often the behavior that ends quickly. Yet, don’t suppress it entirely. So, if you like a few welcome home kisses, encourage them only when you first arrive, or acknowledge them only once you have set down your things and squatted down to receive a welcome. Create a set of circumstances that frames and controls the licking, but if it is not due to medical issues, never force your dog to cease this friendly, expressive behavior.

Lick Granuloma in Dogs (Video)
7 Reasons Why Your Dog Licks His Paws (Video)
Help, My Dog Is Chewing My Feet!