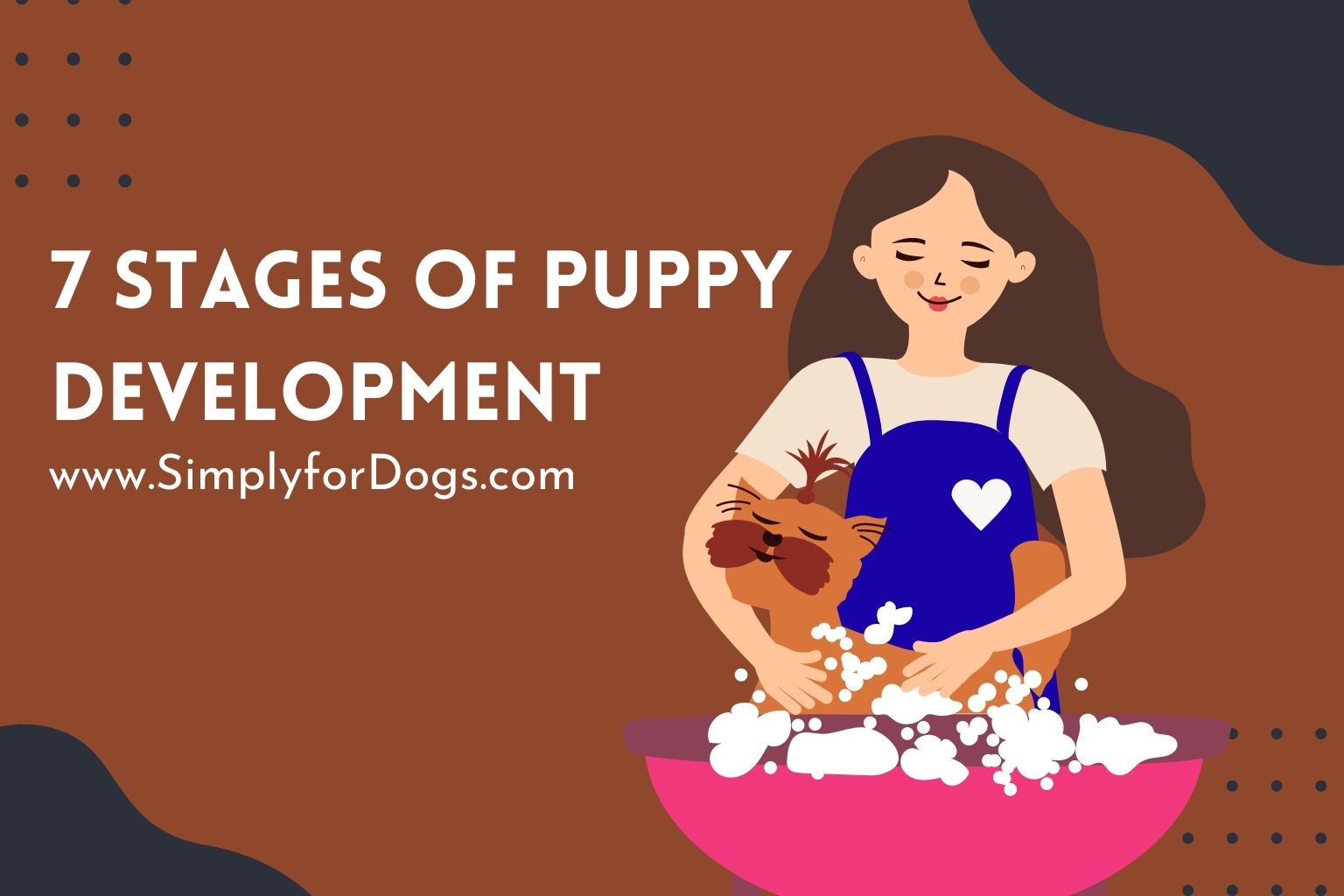 You know, I don’t think there have ever been happier times in my life than when I’ve brought home a puppy. I love the way everything is new to them – they see snow, and it’s like “Whooooo!!!!” Their little eyes open in wonder, and I just want to cuddle them to pieces!

I’ve loved having litters out of Janice and Leroy, but you know, I’ve never really, really thought about how puppies grow and develop. I guess I’ve just sort of watched in wonder.

When I look at the puppies, though, I feel such a sense of wonder. And part of that is wondering how they see the world that they’re bordering into. So, I started researching, and this is what I’ve learned about how puppies see the world. They pretty much go through 7 stages

The puppy has just been born, and for the first three weeks he’s going to spend most of his time sleeping. From the time he’s born until he reaches 2 weeks of age, he will double in size. His eyes will be closed, and he won’t hear anything, but he will be able to find his mother who will provide him with nourishment.

During this stage, the puppy is very vulnerable. If his mother doesn’t keep him warm, he could freeze to death.

During this phase, the puppy’s brain is also developing.  It’s building up mass, and studies have shown that if the puppy becomes stressed during this phase, he could be harmed. This is why humans are told not to handle the puppy too much.

At this stage, to, the puppy will develop early socialization skills, becoming more confident.

This stage occur between 3 and 5 weeks. The puppy’s eyes and ears will begin to open. In the early stages he won’t see or hear all that well, but as his brain develops, the other senses will fall in line.

At the age of 3 weeks, the puppies will still be nursing off the mother but will also begin to be interested in other food. This is where the weaning process begins, and that will be pretty much up to the mother. Some bitches leave their puppies on the milk for a long time while others wean early.

At this point, too, the puppies will likely want to begin to play with one another.

Stage 3 occurs when the puppies are between 5 and 6 week old. At this point, the puppies are beginning to develop personalities – they might be aggressive or submissive. This is usually the time when the breeder wants to think about finding a “forever home for the puppy. It’s worth noting, though, that some breeders will not place a puppy at this age. Some dog breeds seem to take a little longer to socialize. My friend Niela, for example, will not deliver a Rottweiler puppy if it is under 10 weeks – she says that they need longer to socialize. That seems often to be true of the larger breeds.

Should a Puppy 6 Weeks Old Ever Be Taken from Its Mother?
How Big Will My Puppy Be When He’s Full Grown?
Dwarf Puppies and Dogs – Are They Abnormal?

This stage occurs between 9 and 12 weeks, when the puppies are extremely active. This is when they have those sharp little teeth and they can totally wear you out. Just the same, it’s a very nice period in your dog’s development. This is when you get to take them to doggie kindergarten, and when they’re just so curious and inquisitive. Sure, you’re going to have to set limits, but this is the time where you teach your dog. You don’t punish. You appreciate this wonderful, new innocent life, and you proceed accordingly.

At this point, your dog is really ready to learn. He’ll probably willingly follow you wherever you go, and look to you to guide him. At this point, you need to treat your dog carefully. Don’t expose him to loud noises, don’t yell at him, and if there are situations that scare him, don’t make them worse. This is where you’re going to be really forging a relationship with your dog. Your job is going to be to approach as a sensible, calm leader. If you get it right, your dog won’t question your auth0rity later on. It’s also the point where you back off from indulging your dog. I f you do indulge him, then you’re going to make a brat out of him – so please, don’t do that.

At this point, you don’t have that cuddly little baby any longer. The little sweetheart that wanted nothing more than to get in your lap and have cuddles now has a mind of his own.

He’s not your little snuggle bug any longer. He has a high energy level and a min of his own The behaviors that used to be cute (getting into your lap without permission, pulling on the lead, begging and mouthing) are now becoming obnoxious. So what are you going to do?

Well, you can’t stop behavior overnight, especially if you’ve been encouraging it. So, sad to say, if you haven’t been doing basic obedience training from day one, you’re going to have to go back and start over. You don’t want to end up in a battle with your dog, so you’re going to have to re-direct all those unwanted behaviors.

When you allow your dog to do things like get in your lap or jump on you without permission, pull on the lead or shove you out of the way, you’re just building ore problems. Simply state, a puppy or a young dog is not going to just outgrow bad behavior. It’s just going to get worse. So when you allow bad behavior, and you don’t correct it, you’re just allowing it to continue.

This is the point where your hard work actually pays off. At this stage, most dogs will have calmed down a bit, and will be more likely to be responsive to your requests. Keep in mind, though, that your dog is still an adolescent, and that means that some days he’ll act like a responsible adult, but on other days he might revert right back to puppy hood He might be totally compliant, or he might decide that this would be a good day to tear up the house. It could go either way.

This is where you have to be the leader, and not let your dog push his authority. Watch for signs of dominance and nip them in the bud. And if you can’t control your dog on your own, consult an animal behaviorist

A Note on Breeds of Various Sizes

Most people think that when a puppy is 8 weeks old, it’ ready to go to its “forever home.” That’s not always true. Some breeds are more sensitive than others, and need more time with the mother and the litter. My friend Neila, who breeds Rottweilers, never allows a puppy to leave the litter earlier than week ten. She insists that they just don’t know how to be good Rotts earlier than that. I’m with her on this. I really think that most of the time the breeder knows best, so if a breeder is telling you to wait, do it.

So, those are your puppy stages. All 7 of them. I think they make sense. And I think that if a breeder is telling you that it’s the way it should be, then you should listen to the breeder. Breeders do not usually want to make bad decisions. They want to find good homes for good puppies and usually nothing more than that.

In fact, I know a number of breeders who make exactly zilch when they sell their puppies. Once they pay for the shot and the certification and so on, all they get out of the whole thing is the satisfaction of knowing that they’ve placed good puppies in good homes.

Should a Puppy 6 Weeks Old Ever Be Taken from Its Mother?
How Big Will My Puppy Be When He’s Full Grown?
Dwarf Puppies and Dogs – Are They Abnormal?

The Final Word I

I love watching puppies grow up! I really don’t think there’s anything better. It’s important, though, to make sure that they grow up in a loving environment with people who genuinely care about them.

Watching puppies grow up through the various stages of their lives is amazing and uplifting. I hope that you’ll get to enjoy this wonderful experience!