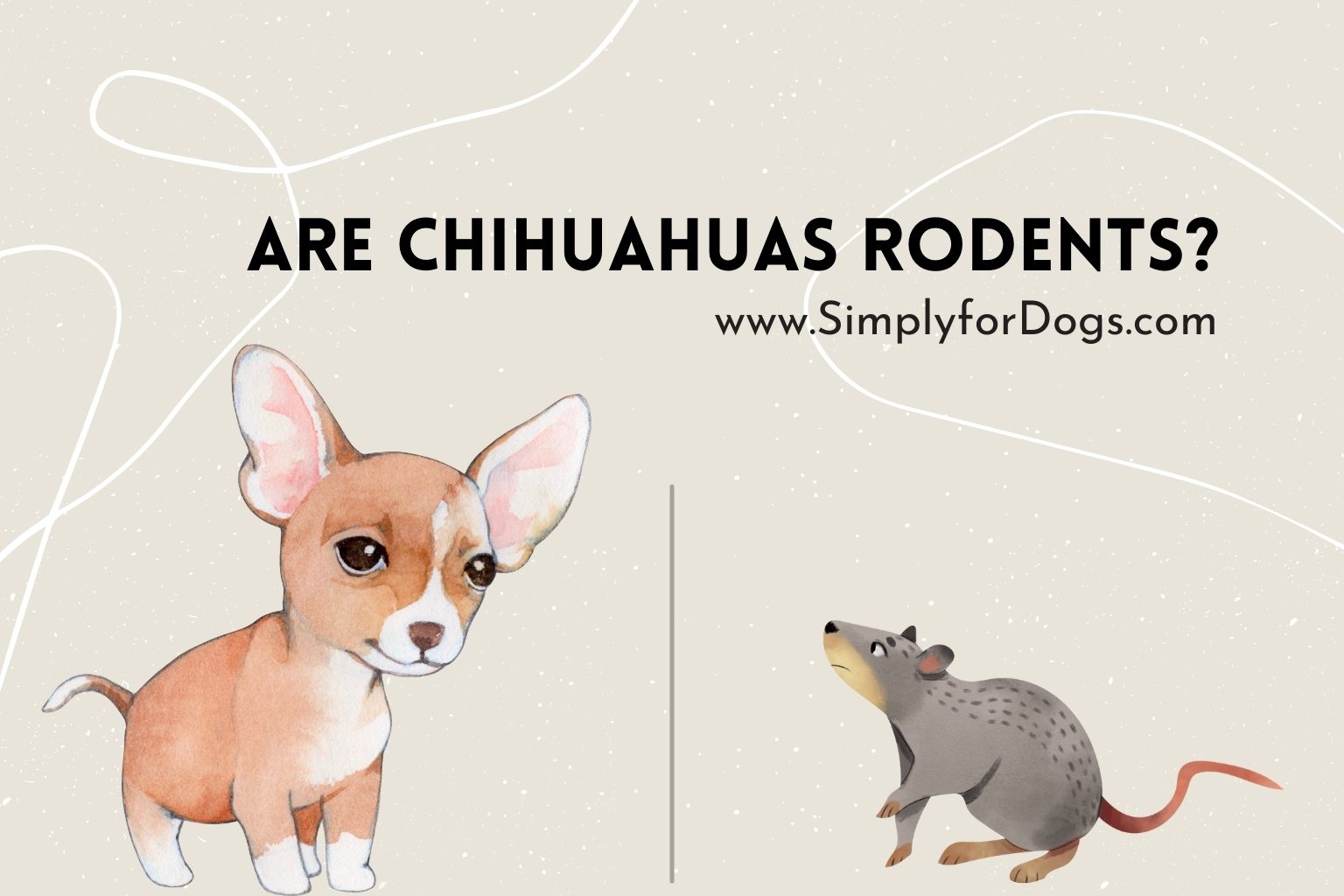 Chihuahuas are the smallest breed of dog in the world. Some Chihuahua dogs are so tiny that they could be mistaken for a large rodents. Don’t let the size fool you. Chihuahuas are 100 percent real dogs. There are no traces of rodent DNA in a Chihuahua’s genetic makeup.

Now, you may have heard that Chihuahuas have rodent DNA in them. On this page, we’re going to discuss what Chihuahuas dogs actually are. We will also get to the bottom of why people believe these small dogs are actually rodents.

Keep reading to learn more about the Chihuahua dog breed.

When you hear the term “purse dog,” the first dog to come to mind is likely a Chihuahua. A tiny dog that loves to be around their owner so much that they are content to travel around in their purse. Since these dogs have such charming and graceful personalities, it’s easy to take them anywhere.

Celebrities and public figures boosted the popularity of this small breed. In the early 2000’s celebs like Madonna, Demi Moore, and Britney Spears were often photographed with their pup by their side. The story even made headlines when Paris Hilton’s beloved Chihuahua Tinkerbell was kidnapped in 2004.

According to American Kennel Club, this small dog breed is the national symbol of Mexico. These dogs typically grow to be 5 to 8 inches in height and usually don’t exceed 6 lbs. Since they are so small in size, these dogs are better suited for mature households. While this breed isn’t aggressive, they aren’t ideal for children because they can only play gently and require special care.

Chihuahuas can easily become beloved companions. If you’re ever in the presence of one of these dogs, it will win you over with its playful and lively personality. Not to mention, they are pretty adorable too.

Why Do People Think Chihuahuas Are Rodents?

Everyone enjoys a good joke. However, some jokes come across as believable, which is how we got to this point. There is a well-known satirical publication site with no journalistic merit called Watley Review. In 2005, this site posted a satirical news article claiming that a DNA study finds Chihuahuas aren’t dogs.

This humorous article goes on to say that Chihuahuas were actually large rodents. They were only bred to resemble canines. The article’s completely false with the intention of giving dog owners a chuckle, especially since the Chihuahua was one of the most sought-after dog breeds at the time the article was published.

Don’t Believe Everything You Read

There is no factual basis to support the article, as it was only meant for humor. At one point in the article, they claim that they were able to identify genes of canines in Chihuahua dogs, but the analysis determined there was no more than 10 percent. They also claimed that it was easier for the giant rats to mimic canine behavior than other animals.

Other Strange Claims in This Fictitious Article

It’s important to remember that Watley Reviews is an independently created site with no factual basis. A licensed veterinarian will be able to shut down many of the claims written in this spoof article. After all, a satirical article shouldn’t constitute pet medical advice.

Some of the findings the analysis determined in the article from Watley Reviews were very obviously meant to make people laugh, such as the suggestion that the Yorkshire Terrier has pigeon DNA. Other findings in their study showed that Lhasa Apso originates from the Tibetan Snow Rabbit, and Shih Tzu has Stoat DNA. While they made claims about several diminutive breeds, none of them proved to be true.

What Makes People Believe Chihuahuas Are a Type of Large Rodent?

There are some pretty ridiculous ideas that can seem believable. The idea that a Chihuahua is actually a large rodent selectively bred to resemble a canine isn’t that far-fetched. While they look nothing like a Chinese water rat (a large rat), they have noted similarities to rodents. To be fair, this breed does look more like rodent species than other breeds of dogs.

Let’s take a look at some of the features that make Chihuahuas appear more like rodents than dogs.

One trait that’s very notable about Chihuahuas is they have a big bulb-like head. Well, big compared to their bodies. There are quite a few features on their heads that make them appear like a type of large rodent. However, the size and shape of their bulbous heads appear more similar to one of a large rat than a Golden Retriever or other canine.

Chihuahua dogs have ears that are large and pointy. They are one of the most noticeable features of a Chihuahua. Rats and mice also have big ears. This had the Chihuahua world up in a stir when rumors started to fly based on the well traveled urban legend.

A Chihuahua’s large eyes are a big part of their saucy expression that people have come to love. Their eyes are big and full of expression. Rodents have a similar look with their eyes, except they protrude out their head more.

The Chihuahua isn’t the only small dog with large eyes. Pugs, Boston Terriers, and Shih Tzu dogs all have very large eyes.

If you were to look at a Chihuahua’s tail, it would appear more like a rodent’s tail than a canine’s. Many dogs have fluffy tails, but not this breed. The Chihuahua has a long thin tail similar to a rat. They are also known to curl their tails based on their emotions. This is different than the tail wag of most dog breeds.

Chihuahuas have some features on their bodies that are more similar to rodents than other dogs. The most noted similarities are the short legs, short fur, and the tiny torso.

Where Do Chihuahuas Descend From?

Since the American Kennel Club recognizes Chihuahuas as a real dog breed, that should be enough of a sign that these dogs are not actually rodents or a cross of other animals. Dog fanciers have been breeding purebred Chihuahuas for many decades. Any use of rodents during breeding is generally fictitious as dog fanciers are pretty passionate about breeding authentic purebred dogs.

Chihuahuas have been picked on the most for looking like other animals with all of the different breeds. So let’s break down where the Chihuahua descends from. If you were to go back to a Chihuahua’s origins, you would find that they descend from wolves. This puts to rest any long-believed dated myth about them being other critters that resemble a canine.

Chihuahuas were discovered in a Mexican state in the 19th century. According to Super Premium Bil & Jac, they are believed to be a descendent from the Techichi. The Techichi is a now extinct small desert canine. Its history can be dated back to the Mayan times, but it is believed that the Chihuahua is a direct descendent because they are similar in size and structure. Studies have also shown that approximately 70 percent of a Chihuahua’s DNA can be linked to the South American Techichi.

Why Do People Love Chihuahuas?

Chihuahua dogs have been selectively bred for centuries to be the smallest dogs in the world. These dogs have become incredibly popular over the years because they are easy to love. There is a great diversity among Chihuahua dog breeds and mixes.

While it’s easy to fall in love with how adorable these dogs are, their size isn’t the only reason people love them. These dogs are very low maintenance and easy to take care of. This makes them more affordable than other dogs, especially when it comes to buying their food.

Chihuahuas also have spicy personalities that are fun to be around. But, don’t let their saucy expressions fool you, as these dogs are known for being very loyal to people. So, when you bring one of these dogs into your life, you’ll have a new best friend before you know it.

Do Chihuahuas Adapt Well to People?

Chihuahuas a definitely people dogs. They love to be around their owners and families, and they are generally good when it comes to meeting new people. While many Chihuahuas may seem shy or nervous about new faces at first, they are known for being quite adaptable to many new situations. This is why it’s easy for people to bring their Chihuahuas anywhere they go.

However, one thing that every owner needs to be attentive to is training. The size of a Chihuahua’s body doesn’t match its personality. These dogs have personalities that are bigger than life. If their owners don’t make a point of training them properly and showing them who is boss, there will be a tiny new king or queen running the house.

Chihuahuas do form very close bonds with their owners. Some of these little dogs are known to get jealous when their owner is paying too much attention to another person or animal. Their bond with their favorite person is so intense that they aren’t afraid to chase off other dogs, animals, or people that are getting too close.

Do Chihuahuas Have Similar Personalities To Rodents?

Chihuahuas and rodents do not have similar personalities. Rodents are timid creatures who are often afraid of people. While rodents aren’t social animals, they are very intelligent. According to Peta, rats are capable of figuring things out that dogs aren’t. This is why rats and other rodents have better survival skills than dogs.

According to Chipets, Chihuahuas are not the most intelligent dogs. They rank low on the scale of intelligence compared to working dogs. There were 138 breeds of dogs tested, and Chihuahuas only ranked 125 on the list. This doesn’t mean Chihuahuas are dumb; it just means they aren’t motivated to be obedient and follow directions.

A rodent is fully capable of taking care of themselves without the help of humans or other animals. They can easily find the resources they need, such as food and shelter. When things aren’t working out for them, they know when and where to move. However, Chihuahuas don’t have that level of intelligence.

Chihuahuas are much more dependent than rodents. But, unfortunately, some people have come to believe that Chihuahuas aren’t dumb rather, they have fooled the entire human race into taking care of their needs.

Have you heard a tall tale that your Chihuahua is actually a large rodent selectively bred for centuries to resemble a canine? This is based on a faux article from Watley Reviews that has no factual basis. Satire articles completely misstate facts just for the sake of being humorous. The facts and quotes stated by this publication are all false.

Chihuahuas are fully canine, and just like most dogs, their genetic evolution can be linked all the way back to wolves. While it’s frequently mentioned that Chihuahuas are a large rat descendent, they actually come from an extinct desert dog, the Techichi.

There are no traces of rodent DNA in the Chihuahua dog breed. These small dogs have been recognized as a real dog breed and may be registered as so. This just goes to show how far a silly rumor can travel. It is also a good lesson to check with the professionals before believing what a satire publication posts.