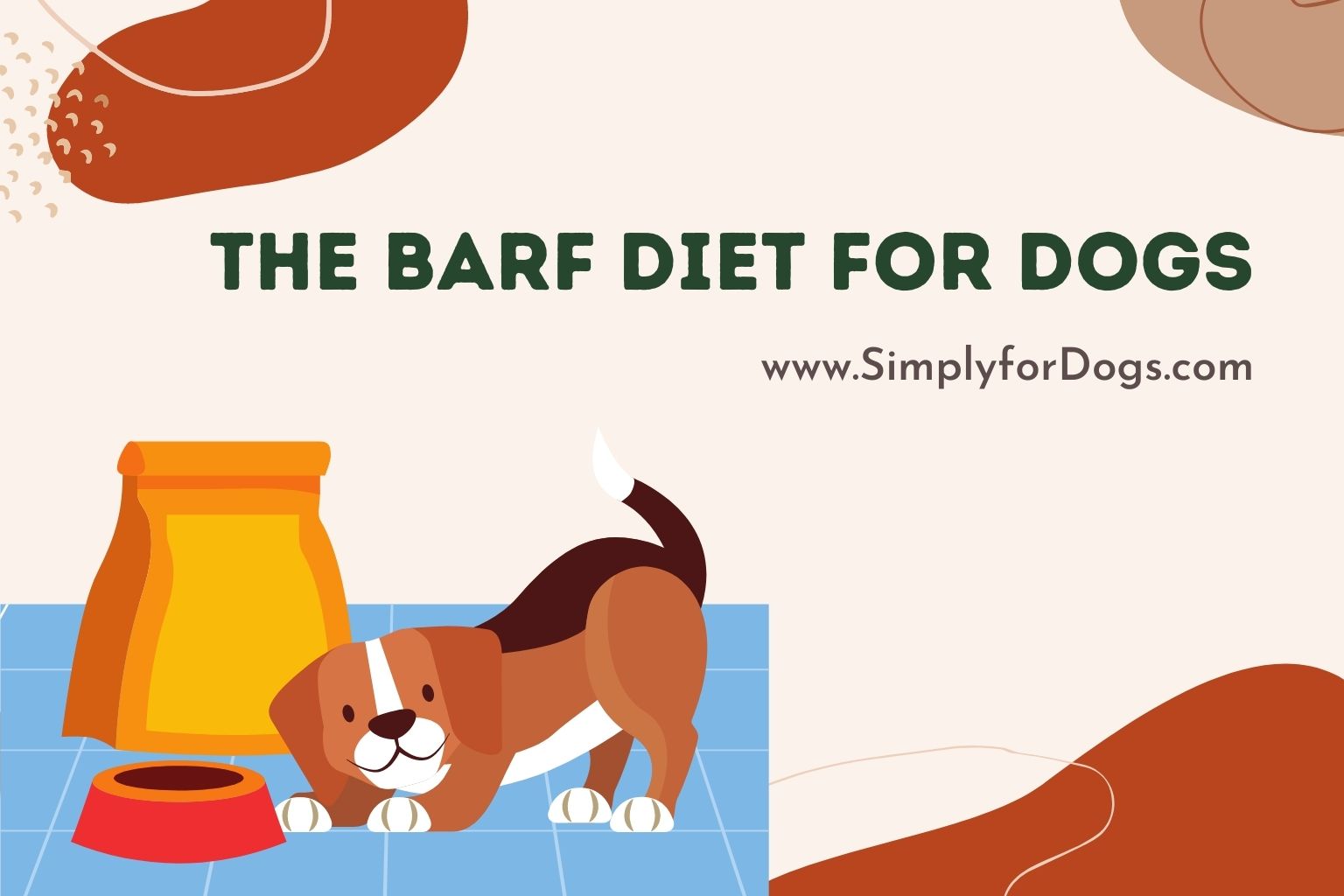 I was at the dog park yesterday, and mentioned to my friend Debbie that she was looking really good, and so was Chuck!

I’ve talked a fair bit about Debbie and Chuck in my posts, and introduced them to you in Step Away From the Dish, Doggie, You Are Way Too Fat! Debbie and Chuck, her Beagle, have both been battling the bulge, and the results are definitely beginning to pay off. They’ve both been eating sensibly and getting a lot of exercise. Debbie has dropped a couple of sizes, and Chuck now looks a lot more like the sleek hunting dog he was meant to be.

Anyway, Debbie thanked me for the compliments, and then totally horrified me by saying, “Hey, Ash, I’ve heard a lot about this dog barf diet; do you know anything about it?”

Raw and Natural Nutrition for Dogs: The Definitive Guide to Homemade Meals
$23.50
-
-
Amazon

I was just beside myself. “Oh my God, Debbie,” I said, “I’ve tried some crazy diets in my time, but you’re doing so well with just eating right, why in the name of all that’s holy would you ever consider eating dog barf?”

Stupid me; she wasn’t talking about eating dog barf. She meant the BARF Diet for dogs; it’s a sort of loosely constructed acronym for “Biologically Appropriate Raw Food or Bones.”

Well, I hadn’t heard of it. But as is always the case with dog-related matters, I made it my business to learn, and I have to tell you that what I learned horrified me even more than the idea that Debbie might be considering eating dog barf.

What Is the BARF Diet for Dogs?

The BARF diet for dogs is, as you can tell from the expansion of the term, a diet that is based in raw food and yes, bones. Those things that I’ve been telling you not to feed to your dogs.

I’m going to tell you right at the outset that I think the BARF diet for dogs is beyond crazy. And yet there are people who advocate the BARF diet.

Okay, let me say at the outset that I’m not a pet nutritionist. I’m not a veterinarian. I’m just a person who loves dogs to distraction and who only wants what’s best for them. And I’m pretty convinced, as I think you will be as you continue reading, that the BARF diet for dogs, at least in its pure form, is about as wrongheaded as it gets.

7 Tips for Choosing a Quality Dog Food
Your Dog is Not a Human, So Don’t Feed Him Like One!
5 Reasons You May Want to Consider a Limited Ingredient or a Homemade Diet for Your Dogs

The Theory Behind the BARF Diet for Dogs

Proponents of the BARF diet for dogs will tell you that, for millennia, dogs have been eating raw food and bones, but commercial dog food has only been in existence for about 60 years. They use this as the foundation for their argument that somehow it’s better for your dog to eat bones (even poultry bones!), hide, offal, etc. than it is to consume well-formulated dry food. They point out that dogs don’t know how to cook, and offer this as a reason why raw food is better.

Oh, well, I guess we didn’t have polio vaccines for humans a century ago, so that means we shouldn’t be using them now, right?

Look, our ancestors didn’t know how to cook either, in the early stages of human development, but you can probably bet that once fire was discovered, fewer people died from food poisoning due to tainted meat. So I ask proponents of the BARF diet for dogs, “Your point would be?”

What Troubles Me Most

What really horrifies me about the BARF diet for dogs is the emphasis on raw bones. And again, I’m not a veterinarian, but T.J. Dunn Jr. is, and what Dr. T.J. has to offer on the subject is sobering to say the least. In a PetMD article, Dr. Dunn references cases reported by a veterinarian, Dr. Ray Goodraod. Dr. Goodroad treated two dogs that had eaten raw bones. One was found eating a deer carcass, and the result was that he became weak and dehydrated, and had difficulty passing fecal matter. The other dog ingested bones found in a neighbor’s garbage can. In both cases, the dogs required lengthy hospitalization, enemas, intravenous fluids and antibiotics. The treatments were very expensive, and if they hadn’t been successful, the next step would have been life-saving surgery. Or very painful deaths for the dogs.

So, do you really want to feed your dog bones? If you think it’s a good idea, just keep reading, because bones are the main ingredient in the BARF diet for dogs.

I love the way that proponents of the BARF diet for dogs tell you that you can change easily from offering your usual dry dog food to the BARF diet without needing to panic. They’re probably right; you don’t need to panic when you’re switching over. You need to panic when your dog ends up with splintered bones in his stomach and is going to die without surgical intervention.

Oh, but the bones aren’t cooked, so they won’t splinter, they tell you.

Still Want to Go With the BARF Diet for Dogs?

Okay, don’t let me stop you. Here’s what you’ll be feeding:

Does that sound balanced to you?

It doesn’t sound that way to me, but proponents of the BARF diet for dogs will tell you that it’s all good, and it will level out eventually. A dog’s diet apparently somehow just balances itself.

By the way, on the BARF diet for dogs, one thing that you can feed that I do consider to be very good is eggs. I’m good with that; I often give eggs to Janice and Leroy because they help with their coats.

Where the BARF people lose me completely, though, is when they come up with their list of what they consider to be “suitable” bones. Get this:

Oh, and remember, it’s fine if they’re not cooked because they won’t splinter! Like they didn’t splinter in Dr. Goodroad’s two cases!

I am deeply, deeply troubled by people who advocate raw bones as a good component of their dog’s diet. Some of the reasons that they offer for suggesting that this is a good idea are just so beyond stupid I can’t even believe it; they’ll tell you that wolves eat raw carcasses every day and end up just fine.

Well, how do they know this?

Think about it: when was the last time you saw a healthy wolf in the wild, never mind an unhealthy one? I suspect that healthy wolves that do ingest bones that splinter and puncture their stomachs or intestines don’t exactly show up with any great regularity. I also suspect that wolves that can no longer keep up with the pack due to, oh, I dunno, maybe eating bones and having their internal organs punctured are swiftly disposed of by other pack members. They don’t exactly live to come out of the woods and say, “Hey, human friends, look at me, I’ve been eating raw bones for years and I’ve lived to tell the tale!”

You bet I’m angry. Why in the name of God would any normal, sensible person feed his or her dog raw bones? Especially since there are so many companies that make raw foods, containing ground-up bones as well as tendons, cartilage, offal and all that other lovely stuff that advocates of the BARF diet for dogs seem to think is so beneficial? Why would you risk serious harm to your dog, not to mention astronomical vet bills, when you can get the same thing in a ground-up formula that is going to cause no harm at all? The nutrition is the same. The potential for harm is nonexistent. So why are there still people who are jumping on the “raw, unground bone” bandwagon?

Because there are no limits to human stupidity, that’s why.

All Right, I Feel Better Now

I know that was a bit of a rant. And, honestly, I don’t know everything about the BARF diet. I just know that no one with a grain of common sense is ever going to give their dogs poultry bones in any form. Beef and pork bones might have less potential for harm, but there’s still a possibility that your dog could end up very ill from ingesting them and having them splinter in the gut. It’s not as likely as it is with poultry bones, but it’s still possible.

If you really want to consider a BARF diet for your dogs, then I urge you not to go into it uninformed. There are books available that will help you to learn more, but even so, please take them with a grain of salt. I’ve found a few at Amazon:

Raw and Natural Nutrition for Dogs: The Definitive Guide to Homemade Meals
$23.50
-
-
Amazon

7 Tips for Choosing a Quality Dog Food
Your Dog is Not a Human, So Don’t Feed Him Like One!
5 Reasons You May Want to Consider a Limited Ingredient or a Homemade Diet for Your Dogs

Am I recommending the BARF diet for dogs in any way? No.

From where I’m sitting, the BARF diet for dogs isn’t all that much different from the Paleo diet for humans. In both cases, I call bullshit, and I call it loud and long! The Paleo diet is nonsense because it takes as its premise that we should be eating the way our caveman ancestors did, while completely ignoring the fact that back in the “Flintstones” era, a 40-year-old caveman would have been very, very old and likely to die very, very soon. In the same way, to suggest that modern dogs should eat the way their ancestors did is utter, unmitigated crap.

Are any of you out there ready to say, “I think I’d like to have my dog live so much less time than he might be able to enjoy because, hey, that’s what happened with his ancestors”?

Hey, as I’ve often said, I don’t have all the answers. I’m not an expert, and I don’t pretend to be. But from where I’m sitting, playing “I’m a greenie health food nut” games with your dog is just wrong. If you want to eat Paleo and maybe die young, that’s fine. That’s your choice. Don’t inflict it on your dog. From my perspective, the BARF diet for dogs is not much more useful than dog barf. Period. Give it a pass.