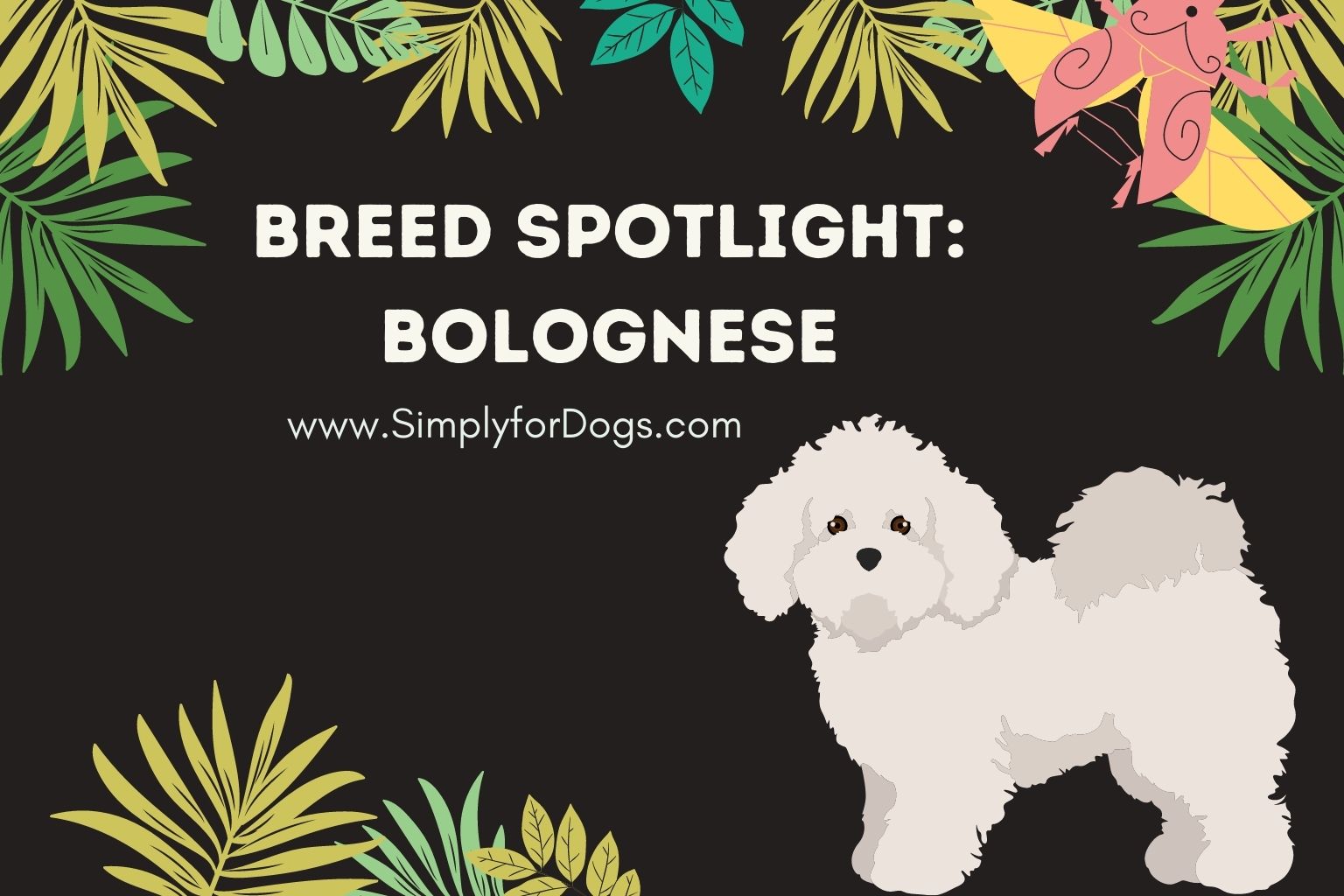 I won’t lie…I thought Bolognese was a word used specifically to describe a pasta sauce. Then, in researching some of the best small breed dogs I ran across the Bolognese dog. A member of the AKC, it is known as the Bolo or the Bichon Bolognese and is utterly adorable. It is also well-known for its easy-going manner. It isn’t all that common to read about toy breeds with a laid-back attitude, and so I decided to really dig in and learn more about these sweet-faced puppos.

And almost as soon as I decided to find out more about the breed, I ran across photo after photo of a white, fluffy dog with a far less groomed and formal appearance than many other small breeds. I was instantly smitten with their windblown hair style, warm eyes, and reputations as humorous, playful clowns.

History of the Bolognese

The breed takes its name from the area of Italy in which it originated – Bologna (much like the pasta sauce!). According to the AKC, the breed was “valued in Italy as early as the Eleventh and Twelfth centuries. Because of its beauty, grace and charm, it became a favorite of the nobility during the Renaissance.” It is said that King Umberto gave a Bolognese to a princess in Belgium as a birthday present and that one of the de Medici clan also sent several of the dogs as gifts to wealthy families in Belgium.

This lengthy and far-reaching history is not just lore, either, as the breed is depicted in tapestries dating to the 1600s and paintings as far back as the 1400s.

Sadly, the decline of the nobility throughout Europe also signaled a decline in the number of Bolognese dogs throughout the world. But, as is often the case with older breeds, one person was dedicated to the Bolognese (a man named Gian Franco Giannelli) and it is he who is credited with the restoration of it to today’s levels.

Bologneses arrived in England only in the 1990s and was shown that same year. It was officially recognized by the UKC in 1995. By 2002 it was in all major dog shows. It was recorded in the Foundation Stock Service around 1999 and was given the clearance to compete in AKC Companion Events in 2008. It is part of the Toy Group and is noted for its love of human companionship, making it an ideal companion pet.

Described by some as “comical and curious,” the Bolognese are also incredibly intelligent and devoted – something you can easily read in their eyes. They are “people persons” and though not exceedingly energetic, will put it all out for their humans – including kids. With their white and fluffy coats, small, stocky and compact bodies and their smaller size, they are often immediately described as cute. Weighing in at around eight to 14 pounds, they stand around nine inches to one foot at the shoulder.

Their heads are egg shaped and feature a protruding snout (often capped with a pink and black nose). They have high set ears that are left long and hanging, but their size can often make their heads seem much larger than they are.

Their white coats are particularly eye catching and the dogs are covered in long, silky fur from head to toe. They have shorter hair on the muzzle with longer hair on the head, top line of the feet and the flocks. It is slightly frizzy or curly and often a pure white to slightly ivory hue. The tail of the Bolognese is curved and carried over the back, helping to support the image of the dog as a curly little ball of fur.

There are mostly warm and affectionate words used to describe the personalities of Bolognese dogs. Terms like entertaining, intelligent, playful, inquisitive, dedicated, and even patient are some of the most commonly used adjectives. However, it is important to note that they are extremely people oriented, and this means that they are best suited to owners who can give them an ongoing amount of attention or company.

They are definitely lap dogs and adore being at the center of it all, which is why they are some of the most readily trainable dogs. They are pretty resilient and focused, and they are “great friends to kids”. Because of their small size, however, (and their desire to please) they may not be well suited to homes with toddlers who are able to easily injure the delicate Bolognese.

They are prone to separation anxiety if left alone, and this can make them apt to such unwelcome behaviors as indoor soiling, barking and howling, chewing and other destructive habits. Though they are described as lower energy dogs without the need for a great deal of exercise, they do love to play and romp with their people and other pets.

They should be socialized as early as possible since they can become timid with strangers. Pups as young as eight weeks can enter early training and obedience, and this breed is quite apt to pick up new tricks quickly and rather easily. As one expert explains, the Bolognese is “especially active, but he will tailor his activity level to yours. His whole goal in life is to spend time with you and make you happy.” 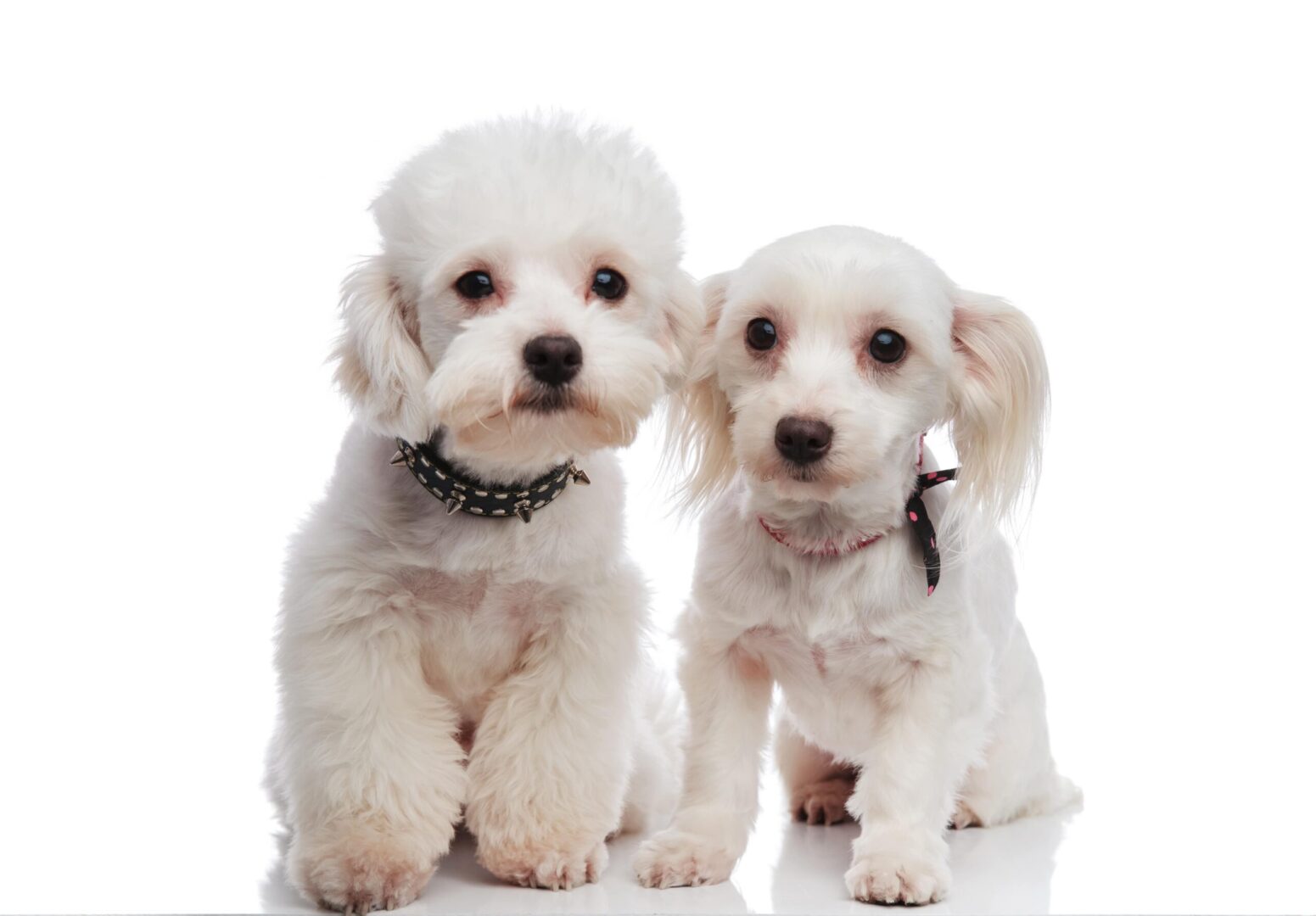 Yet, you should never hesitate to get them into training. If you wait for them to reach six months or more, they can become a bit stubborn. Experts say that some Bolognese can be difficult if left untrained for too long a period in their lives, so go ahead and get them into a training regimen or a puppy class as soon as you bring them home.

Because the breed is noted for its lovely temperament, you can count on the pups inheriting the same sort of personality and temperament as the parents. Work with a reputable breeder and discuss the level of activity and energy you are seeking. They can help you to determine if their pups are a good fit and if the parents have the personalities and traits you seek.

One major issue to keep in mind is that those who want to adopt a Bolognese will also have to be very dedicated to their need for constant grooming. As one enthusiast stated plainly, “When it comes to grooming, the Bolognese is a high-maintenance breed.” Their coats demand a near-constant level of attention to grooming and bathing. With their snowy white coats and curly locks, you will find it best to brush them at least once each day. This prevents tangles and staining or discoloration from any debris. You will have to bathe this breed whenever the coat is soiled or dirty and will require a whitening shampoo from time to time. If you want to know more about this, I covered it in great detail in an article from 2017.

You may find it best to keep their coats shorter to make it easier to dare for them, and that can mean regular visits to a professional groomer. One of the worst issues in terms of upkeep and grooming is the tear stains that this breed is prone to develop. A rusty discoloration is commonly found around the eye area, and if you dislike the appearance of this, you will need to train the pup to allow you to wipe the eyes free of the discharge each day, and sometimes several times a day.

As to their other grooming requirements, the Bolognese need only the more traditional amount of attention to their toenails, with a twice monthly trim typical. As I always recommend, any owner should introduce their dogs to dental care early in life, with daily or every other day teeth cleaning the norm. Any breed can suffer a long list of problems if they have dental decay or disease, and it is easy enough to take a few moments of each day to clean your puppo’s teeth.

You will want to check their ears on a weekly basis, ensuring they are both odor free and clear of debris, and you may need to acclimate the pup to frequent ear cleanings with professional ear cleansers. This breed is prone to overgrowth of hair in the ear canal, so twice annual (or more frequent) checks with the vet may become important.

Interestingly enough, the hair around the eyes can lead to eye problems if it is not kept free of buildup and debris. Though this is not a common health issue with most Bolognese, though it is something to remain aware of if you decide to adopt one.

The Bolognese is not known for a long list of common health conditions or genetic issues. Typically, there are just two issues to consider:

Because of this, you will want to work with a good breeder who makes it a point to screen parents for any inheritable conditions including luxating patellas or eye issues. They should (on recommendation from the American Bolognese Club) have CERF (Canine Eye Registration Foundation) examinations and Patellar Evaluation.

Some say that the Bolognese breed can also suffer from hip dysplasia, as well as Legg-Calve-Perhes disease that causes the thigh bone to shrink due to lack of circulation. This first manifests in a puppy of roughly five to eight months old as limping, and will require a surgical repair. And as is the case with almost all smaller dogs, the Bolognese can be prone to periodontal disease simply because of the smaller size of the mouth, but as I already noted, daily or regular dental care can really save the day.

As with personality, you can tell a lot from parents, and a good breeder will fill you in on any issues that your pup’s parents might have. Always obtain a health guarantee from your breeder and request those screenings above to be as sure as possible that common issues are not present. It is not always possible to detect potential issues, but both you and the breeder can work together to uncover potential issues.

Bolognese are small dogs and, as you may already know, that means they are apt to have longer lives. The average life span of the breed is 13 to 15 years, and with good health, your friendly little Bolo may live even longer.

Part of the Bichon family, and with a long history of associating with nobility, the Bolognese is a charming creature to welcome into your home. They are highly adaptable dogs and though their fur makes them a somewhat higher maintenance breed, everything else about them is incredibly easy to manage. Though you may hear that they are a “one person” breed, the truth is that they love being a part of a family. They may not do so well with homes full of very active kids and teens, as they are so little that they can end up under foot. However, if brought into a home early and raised around other dogs and cats, they adjust well. They are fine in an urban, apartment setting or a country home. They hardly shed and they train very easily, as long as you start early. Skip the training when a Bolognese is a pup, and you may find yourself with a stubborn housemate. It is rare among smaller breeds for its non-yappy bark and even though it can be a “big” barker, it is not really prone to barking much at all.

Enthusiasts, or those eager to learn more about breeders in their area can check with some of the clubs and associations dedicated to the breed:

If your goal is to find a family-friendly companion or a lap dog that is eager, clever and sweet-natured, the Bolognese will be an ideal choice. Just be ready to take care of that beautiful coat and do a bit of gentle play each day, and your puppo will be a very happy Bolo!