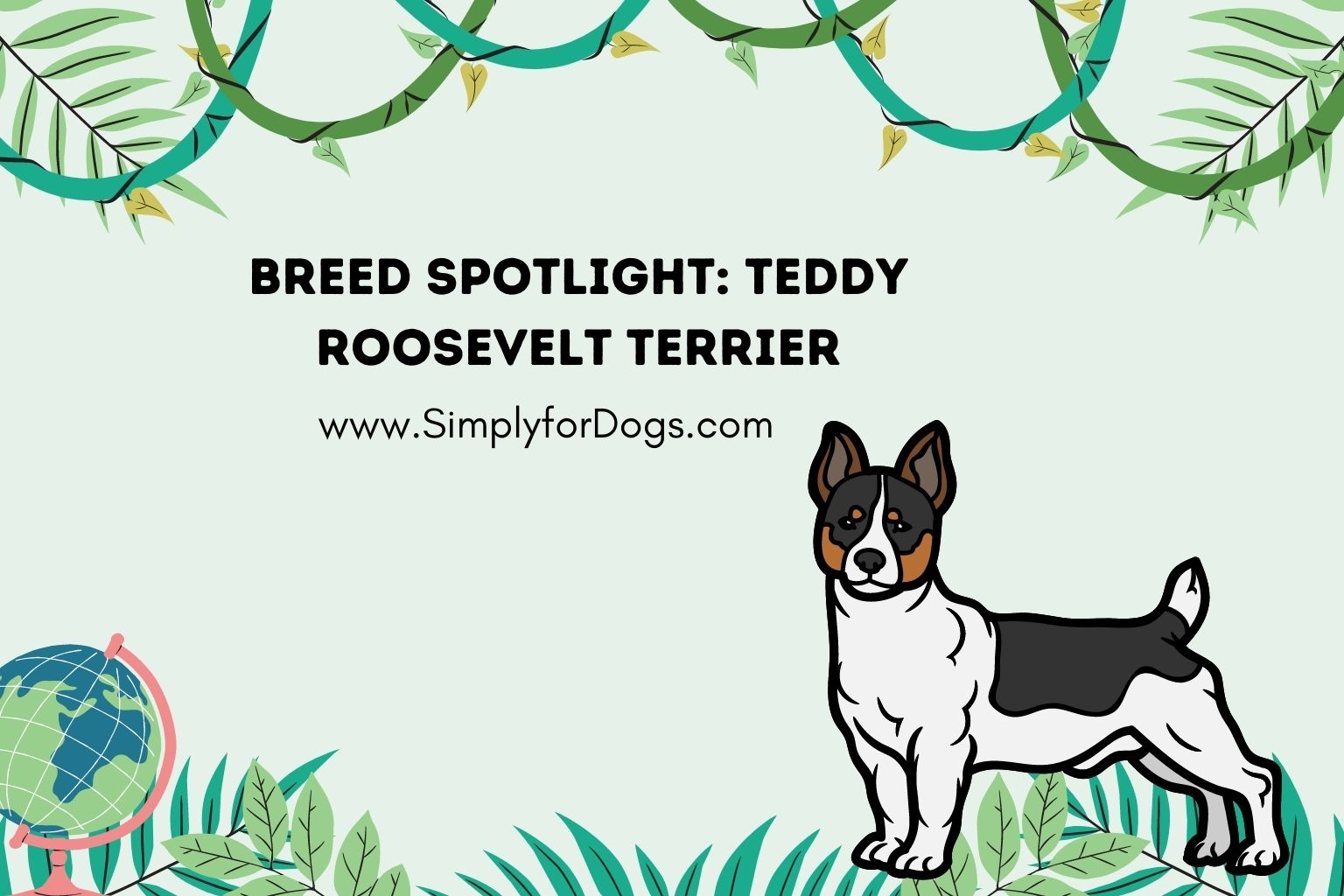 Instead, they are short and sturdy dogs that are the result of the cross breeding of other medium and small dogs that “accompanied early American immigrants”. And as small as they are, they are often described as a “big dog in a little package,” with the sort of bravado and energy of their namesake. In fact, Teddy Roosevelt himself owned several of the breed and counted on them to purge the White House of any rodent infestations.

History of the Teddy Roosevelt Terrier

Named after America’s 26th president, the dogs are often described as being a variety of Rat Terrier, which had two categories based on the lengths of their legs. It is the Type B or short legged group that is now known as the “Teddies” or Teddy Roosevelt Terriers.

Small and sturdy hunters, they were brought by immigrants to the United States in the late 1800s and then headed westward with farm steading families. Their main job was to clear a home and keep the farm free of any vermin. They are adept at this task and, as noted, were able to clear the Roosevelt-era White House of any infestations.

Also as noted, they are descendants of Rat Terriers, but experts also indicate that there are elements of the Manchester, Bull, and Smooth Fox terriers as well as the Beagle, Whipped, Italian Greyhound and (extinct) White English Terriers, too. This is why you might look at one and see something distinct from the average rat terrier. In fact, though they have breed standards according to the AKC and UKC, they are also quite varied in appearance.

The breed was recorded in the Foundation Stock Service of the AKC in August of 2016 and is part of the Terrier Group designation. They are also approved for Earthdog events and as of October of 2918, they were approved to compete in the Miscellaneous Class. The American Teddy Roosevelt Terrier Club was then designated as the AKC Parent Club of the breed.The United Kennel Club recognized the Teddy Roosevelt Terrier as a separate breed from the Rat Terrier in 1999.

Small and remarkably sturdy, some Teddy Roosevelt Terriers are even bulky and muscular. There is no real difference in size between males and females, with average weights ranging from ten to 25 pounds and heights from eight to 15 inches at the shoulder. However, many note that they have a lengthier body than most would expect of a dog at this height, and their bodies are often quite boxy in shape.

Described by the AKC as “low-set rectangular” in shape, they are agile and well balanced. They are noted as being very slow to maturity, taking two to three years of age to reach full maturation. Their heads are to be in proportion with the rest of the body and always seems to wear a very lively, alert and yet gently kind expression. They have light to dark brown eyes and erectly carried ears that stand out against the full muzzle that tapers only a bit at the nose. The natural tails are acceptable under AKC standards, though some owners prefer to dock them.

The coat of the Teddy Roosevelt Terrier is usually quite short and dense with a nice sheen and a coarser texture. They are usually bi-color, but tri-color is also common. White is often the dominant color, though this is not always the case. They can be found in black, white, brown, red, blue and pied and noses can vary from black and brown to blue.

Though small, the Teddy Roosevelt Terrier is a remarkably active dog with a huge personality. Yet, they are not prone to the “Napoleon syndrome” that many other kinds of smaller dogs manifest. As one expert noted, they are “a very active, playful terrier with a heart of gold.” The AKC continues that description explaining that they are great with children, cats and other dogs, but only when raised and trained with them.

If you are looking for a tenacious hunter with lots of courage and boundless energy, the Teddy Roosevelt Terrier is your top dog. They are described as the ideal companion pets, and while they learn extremely fast and are ready to engage in anything their people are doing, they can be one-person types. This means that training has to be done repeatedly and reinforced constantly if there are other animals in the home. This breed also does best with a lot of daily activity, and though long walks and games of catch are good, you will find that there are few breeds that will go with such enthusiasm into obedience and agility training.

And though they socialize well with other dogs (if trained and prompted), they are authentic “people persons” who enjoy little more than sharing the company of their humans.

Their compact sizes make them ideal for city living or rural life, but the key to their happiness and well-being lies in ensuring they get enough activity, exercise and stimulation. If you are rarely home and have no other pets in the household, this is definitely not the breed for your. 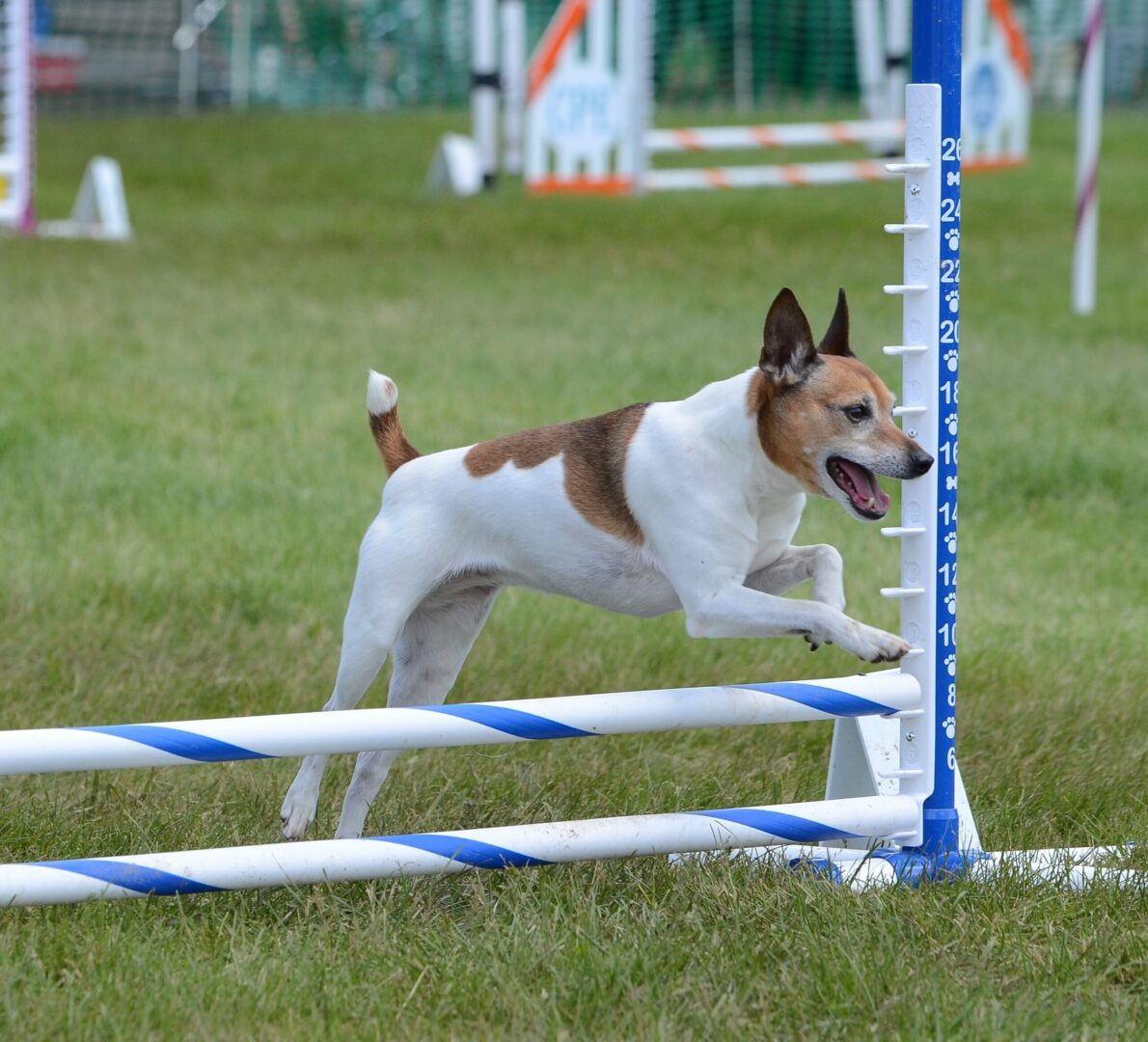 Again, as the AKC explains, they are quick to learn and prepared to do exactly as they were bred to do – eliminate vermin. Yet, they can actually be trained around their prey drive and will easily give up the compulsion to pursue if you live with cats and smaller pets. They are the ultimate adapters and really adore children. In fact, early immigrants counted on the breed to be both guardian and playmate to kids!

And while a fully enclosed and secure yard is ideal as a play area for the Teddy Roosevelt Terrier, they won’t be happy exercising on their own. They like active games of fetch, long and active walks or runs, and they particularly appreciate activities as rigorous as hiking, swimming and catching games such as frisbee tosses. They are always ready to go and will need training if you wish to teach them not to alert or bark, communicating boredom with vocalizations. Another expert says that the average amount of walking this breed requires per week is roughly 12 miles! They should be active and exercised for around an hour per day – so, if you cannot see yourself covering 12 miles of walking each week or giving up an hour a day to exercise and activity, this is not the right breed.

If you cannot supply that mental stimulation and physical activity, the Teddy Roosevelt Terrier is apt to become a very problematic pet. They will bark, dig, chew and generally destroy everything within reach. This is one key reason that they are trained to be guard dogs since their active listening and patrolling of a property can keep them busy while their family is away.

So, as I always recommend, you will want to get this puppo into training as young as eight weeks or as soon as you bring them home from a shelter or adoption facility. Start with simple obedience classes to see how quickly your Teddy Roosevelt Terrier picks up information and then move on to more progressive stuff as time passes. Most dogs of this breed are fast learners and able to take advanced training fairly quickly.

If you are purchasing from a breeder, one of the best ways to determine the general personality of your future furry family member is to gauge the way that the parents behave. Any unwelcome behaviors to people, younger kids and other animals on the part of the parents should not be ignored or explained away by the breeder.

As you might guess, with their short coat and good builds, they are easily groomed and maintained. They don’t really shed but do well if you use a soft slicker brush to remove dead hair and any debris. This breed does have a seasonal shedding period, but with brushing and bathing, you should have no trouble with too much hair around the house. A bath every four to six weeks is just fine, but as is almost always the case, go for a mild shampoo that does not strip away natural oil or irritate the skin.

Always dry the dog thoroughly and use the bath as a chance to check out their ears and even trim their nails. The AKC does warn that their nails have a tendency to overgrow and crack or split, so pay attention to this issue, especially if you cannot get your dog out and about to naturally wear down the nails.

You will want to make a habit of brushing this breed’s teeth every other day or so, since most small dogs have a higher incidence of dental disease.

Although the most responsible breeders pay close attention to the health and genetics of parents, you are not always guaranteed that your dog is going to remain free of inherited, genetic and unpredictable health issues. This breed is noted for:

Always ask your breeder if they have screened their breeding pairs for eye disease and other issues. As with personality, you can tell a lot from parents, and honest breeders will fill you in on any issues that your pup’s parents might have. Always obtain a health guarantee from your breeder and request screenings to be as sure as possible that specific genetic issues are not present. It is not always possible to detect potential issues, but both you and the breeder can work together to uncover potential issues.

As small dogs the Teddy Roosevelt Terriers have longer lives. The average life span of the breed is 13 to 15 years, and with good health, your Teddy can live even longer.

Growing up, I loved to read about the pioneers heading west and catch any mentions of dogs, cats and other animals that went with them on the journey. The Teddy Roosevelt Terrier appeared after the frontiers were closed. Yet its forebears did make that journey across the seas and into the New World, and contributed to this modern breed noted for its reliability and appealing nature.

It is easy to see why early Americans chose them – brave and vigorous, joyful and playful, obedient and whip smart, they are a really desirable type of dog. Do keep in mind that they require that attention and activity to be happy, and if you adopt two or more of the same breed, you will have to watch for alpha dog behaviors as they will compete for the attention of their primary human caregiver. However, you will find few owners with even a mild complaint about the Teddy Roosevelt Terrier. They are just too fun, clever, curious and dedicated to generate anything but affection and dedication from their human families.

Today, they are used a lot less for vermin removal than they are for unique kinds of tracking. They are locating black truffles in the Pacific Northwest, trained to scent almost anything – including lost kids – and are noted for great dedication and courage at all times. Roosevelt described himself in one simple story about his Rat Terrier mix (an early variety of Teddy Roosevelt Terrier), named Skip. Roosevelt found him while hunting in the Grand Canyon and said, Skip “could stand his ground against anything–something I felt I often had to do myself when facing Congress!”.

So, if you are eager to find your kids a great guardian, a real cuddle bug who enjoys spending time with you and an eager friend to head out on hikes, walks, swims or adventures, then you’ll probably adore the Teddy Roosevelt Terriers.