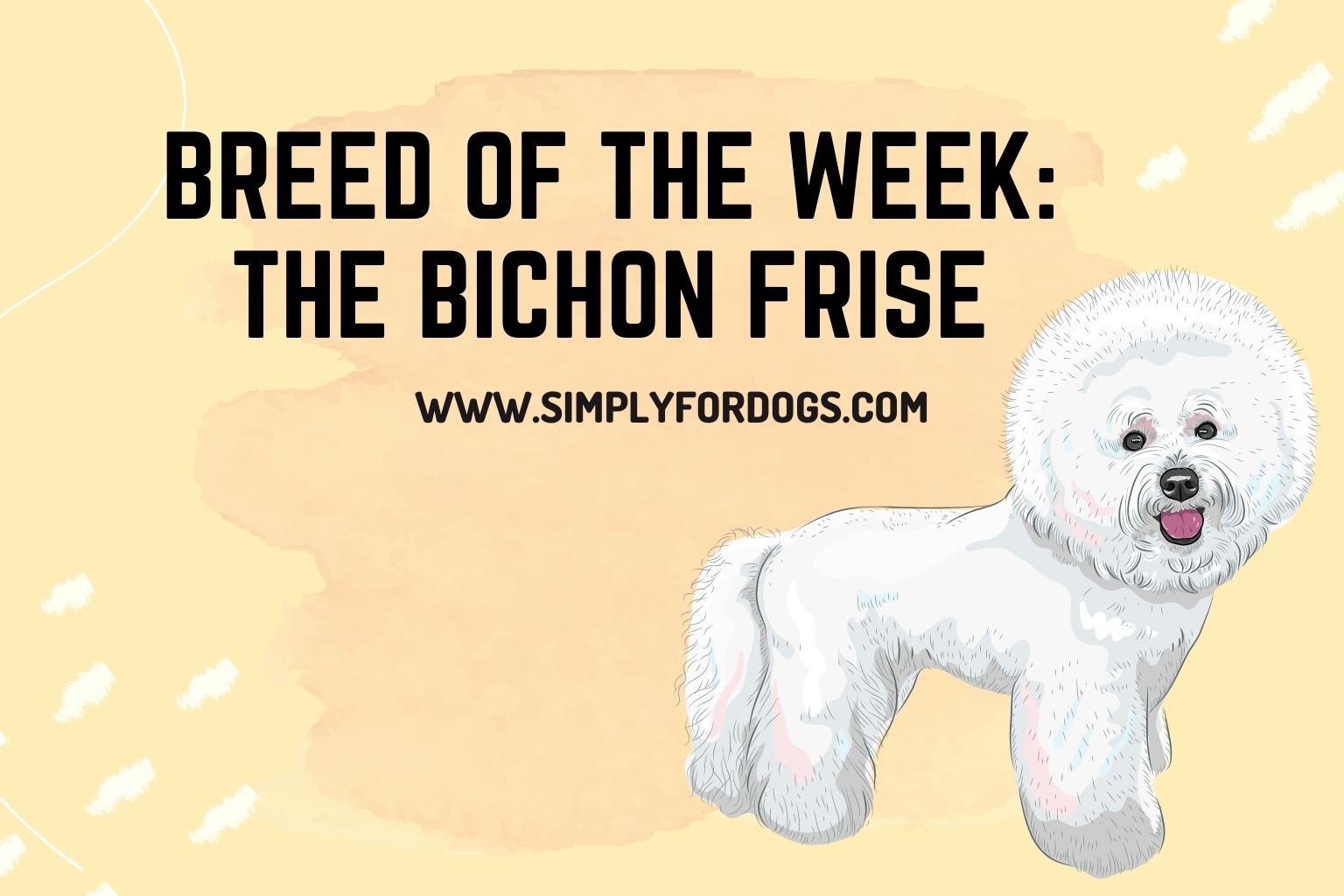 Okay, with this breed of the week, let’s put one thing to rest immediately p the pronunciation. It’s not “Bitch ‘n’ Freeze,” and it’s not “Beach on Frizz,” and it’s not “Bish On Fries.” It’s “Bee Shawn Free Say.” Got it? Good! Now let’s move on.

The Bichon Frise is a small dog with a cheerful disposition and a wonderfully fluffy white coat that makes it look quite a bit like an over sized marshmallow. His happy, cooperative nature makes him a great companion.

There’s not too much of a downside with a Bichon. His good qualities include:

These characteristics make the Bichon a great companion dog.

Bichons are small, usually about 7-12 pounds, and typically stand about 10 inches at the shoulder. The Bichon is almost always white, although you may find color variations extending to pale yellow or cream. An arched neck is a characteristic of the breed, and they have wonderfully feathery, plumed tails that arch proudly over their backs.

Bichons are extremely intelligent, and will happily learn just about anything you want to teach them. It’s important to be gentle during training, though. A Bichon is very sensitive, and if you use harsh corrections, or scold a lot, you will break your dog’s spirit. These gentle little souls do not respond well to scolding.

It can be difficult to housebreak a Bichon, so the use of a crate is highly recommended. When introducing a Bichon pup into your home, remember that they are very small, and should be handled carefully by children. By the same token, don’t overprotect. If you do, the dog may become fearful.  You want him to be confident and able to cope with other animals and people.

People who are looking for small dogs often fall prey to puppy mills. Think about this – a baby Rottweiler looks like an adult Rottweiler. A baby Doberman looks pretty much like an adult Doberman. A baby Bichon could look like – well, just about anything. It can be very hard to properly identify a young animal of a small breed. So unless you’re dealing with a proper, registered breeder, there’s no guarantee that the Bichon you think you’re getting is actually a Bichon. It could be any combination of small breed that looks like a Bichon, but really isn’t. I’ve talked more about these issues in How to Get the Right Dog From the Right Breeder.

No one really knows where the Bichon Frise originated. It is thought that it may have descended from a water dog, the Barbet, and that the term “Bichon” is a diminutive form of the word “Barbet.” Probably, the breed dates back to the 14th century, and was brought through Phoenician trade routes by way of Italy. Other theories, though, suggest that the breed was brought over to Spain by Italian sailors. Still other theories put forth the idea that when Italy was invaded by France in the 1500s, the French brought these dogs back to their home country as the spoils of war.

Regardless of the manner in which the Bichon Frise made its way across Europe, it is known that it soon became popular with the nobility. Both King Francis I of France and Henry III of England had Bichons, and the breed became popular throughout the rule of Napoleon III.

Ultimately, though, the Bichon lost popularity, only to regain it in the late 19th century. Post-World War I, breeders became interested in the Bichon once more. They remained popular in Europe, and then in the mid-1950s, were brought to the United States.

Today, the Bichon Frise is known for a cheerful attitude, a great personality, and joy in being the center of attention. The Bichon is playful and independent, and can stand a bit of time alone, but if left alone for too long can become destructive.

It’s very important to teach your Bichon proper manners, so if this is your dog of choice, you should start obedience training early. Bichons learn quickly, so you will probably find obedience classes quite satisfying.

The temperament of the Bichon is affected by training, socialization and heredity. If you have a puppy that has a nice temperament to begin with, then you will likely find that he will be more than happy to approach other people and be handled by them.  Before choosing a puppy, take a look at the parents to see what their temperament is like – the apple does not often fall far from the tree.

Puppies of virtually every breed need to be socialized early. You want to expose them to all kinds of sounds, sights and experiences. So take your Bichon to puppy kindergarten, make sure he sees other people, and take him anywhere you can think of that will help him to work on his social skills.

Almost every breed can be susceptible to health issues, but Bichons are generally healthy. Very rarely, you may see a Bichon with hip dysplasia, elbow dysplasia, or von Willebrand’s disorder (a condition similar to hemophelia). Bichons are also very sensitive to flea bites. Kidney stones are also sometime an issue.

Bichons make great family dogs. They’re good with kids, and love to play or just cuddle. They’re also very tolerant of the noises that can occur in a household with kids.

As to other animals, Bichons are typically good with other dogs, and cats.

If you love your Bichon Frise, why not tell the world? Vbnotyetpe makes a dog bone sticker window decal that you can put on your computer, in your car window, on your bike, or anywhere else that you want to display your passion for Bichon Frises. It’s a steal at just $3.87, and the shipping is free when you buy it from Amazon.