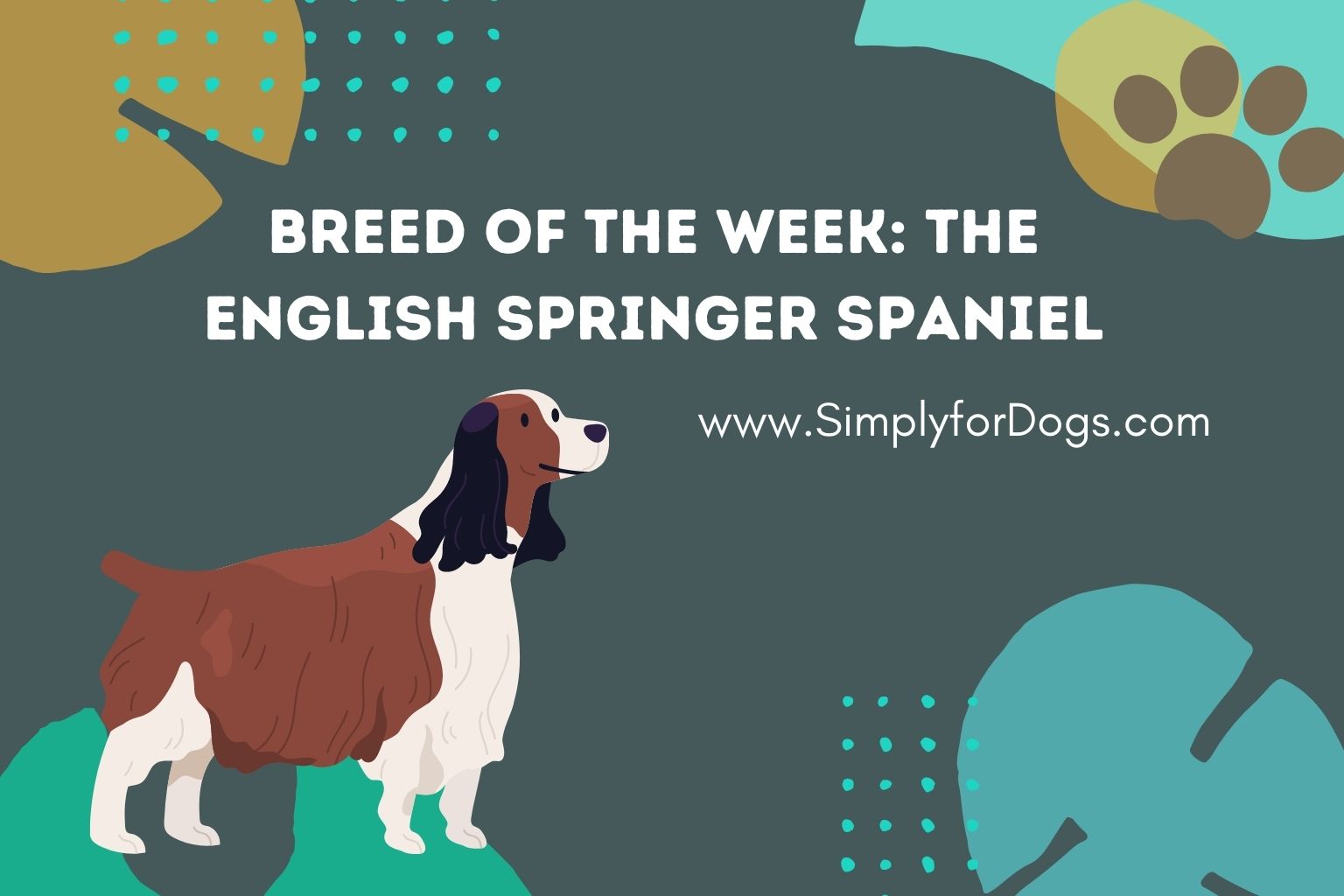 I’ve mentioned before (in Introduction to Hunting with Dogs) that although I hunt, I’ve never done so with a dog. If I were disposed to do so, though, and if I weren’t so stuck on Boxers, I believe I would be very happy with an English Springer Spaniel as a hunting dog and companion. I mostly hunt small game, and that’s the main purpose of the English Springer Spaniel – to “spring” at small game, flushing it out so the hunter can get a shot at it.

Although he was developed as a gun dog, the English Springer Spaniel is also known to be good at tracking, obedience and agility trials and more. He also generally loves being outdoors, so he’s a great companion if you enjoy camping or hiking. Then, when the outdoor adventure is over, he’ll be quite content to snuggle up with you for a bit of quality cuddle time.

Spaniels in general are considered to be among the older breeds. They are believed to have their origin in Spain (hence the name, “spaniel”), and most likely found their way to other parts of the world on trading ships. In fact, spaniels were recorded in Welsh history as far back as 300 AD.

Spaniels that look very much like the English Springer Spaniel we know today are depicted in the artwork of the 1500s and 1600s. In the 1800s and 1900s, spaniels came to be classified by their purpose as opposed to their breed, and because of that, you could even have different “types” of spaniels in the same litter. The smaller dogs would be used for hunting woodcock, hence the name “Cocker Spaniel.” The larger dogs were used for flushing, and therefore known as “Springer Spaniels.”

This changed, though, over the next 20 or so years, as “show people” began breeding for characteristics that they felt were most in line with breed standards. “Field trial people” also began breeding for their most desirable characteristics – speed, working ability, sense of smell and endurance. Today, there is no interbreeding between the two types – at least no planned interbreeding, and it is rare for an English Springer Spaniel to participate in both show events and field activities. In fact, the last time a dog achieved championship in both types of events was in 1938.

There is little difference in size between male and female English Springer Spaniels. The typical dog will stand 18-22 inches at the shoulder, and will weigh 45-55 pounds. Springers that are bred for field trials will usually be somewhat lighter than show dogs.

The English Springer Spaniel is typically sociable, intelligent, and eager to please. Temperament will have to do with a variety of factors, including training, socialization and breeding. There have been reports in recent years to the effect that Springers are becoming more prone to timidity or aggression – keep in mind that these traits are not desirable in any dog, and could be an indication of poor breeding, so make sure you choose your breeder carefully.

When choosing a Springer puppy, you want one that is playful and curious, and neither shrinking back in a corner or bullying his littermates. You should also expect, when you visit the litter, to be able to view the mother. It would, of course, be ideal if you could see the father as well, but this may not be possible. Springer Spaniel breeders will sometimes take their bitches to studs in another town, or even another state, to be serviced. Ask to see pictures if possible, but don’t assume that the absence of photos is necessarily a red flag. If, for any reason, you cannot see the bitch, find another breeder – something is very wrong with this scenario.

Springers are no different from any other dog when it comes to the need for early training and socialization. The first part of the socialization process happens with the mother and the littermates. Once you take your Springer pup home, the rest is up to you, so make sure that you introduce him to as many people as possible. He should also be exposed to different neighborhoods, sounds, smells and experiences if he is to grow up to be a well-adjusted dog.

You are never going to find a breed of dog that has absolutely no health issues, but Springers are generally healthy. The following are some of the conditions that Springers could develop, but keep in mind that the key word here is “could.” Not every Springer will have health problems, and it is not all that likely that your Springer will develop any of these problems.

This condition is inherited, and almost every medium-to-large breed of dog runs at least some risk of developing it. Hip dysplasia occurs when the hip joint and thigh bone don’t connect properly. Signs can include lameness, although sometimes hip dysplasia has no visible signs. The condition can worsen, though, as the dog ages. Your breeder should be able to provide you with the screening results for your puppy’s parents, proving that the parents were free of hip dysplasia. No responsible breeder will ever breed animals that test positive.

Even if your dog does have hip dysplasia, though, it may not be a huge cause for concern. Many dogs can have the disorder and never show symptoms. Others may have mild symptoms that can be eased using pain medication. Rarely, surgery may be needed.

This is a problem with the retina. Dogs with this condition are born with malformed retinas, but the condition is usually mild and will not result in any significant loss of vision. An English Springer Spaniel with retinal dysplasia can lead a full, happy life and be a wonderful companion, but should not be bred.

This is a more serious eye disorder in which the retinal layers begin to degenerate. The condition usually appears in Springers between the ages of 2 and 6. It is progressive, and eventually the dog will go blind. This is a rare condition, and cannot be treated, but it is not painful. You have undoubtedly heard of dogs who manage quite nicely by using their other senses to compensate for blindness, so PRA does not have to be a death sentence, either.

This is a minor eye condition in which the lower eyelid folds inward, irritating the eye. Surgery can correct entropion.

PFK is an enzyme that enables the body to convert sugar into energy. Some English Springer Spaniels do not have enough of this enzyme. There may be no symptoms, or your dog could hyperventilate, develop a fever, and lose muscle mass. Your vet can take a blood sample in order to determine if your dog has PFK deficiency, and the condition can be treated with rest and IV therapy.

Springers are somewhat prone to skin problems, which could include itching, hair loss, greasiness and pyoderma (infection). Also, because of their long ears, Springers are also prone to ear infections, so it’s important to keep the ears dry and clean. Your vet can prescribe medication for most skin and ear issues.

English Springer Spaniels are typically energetic dogs, with Field Springers requiring more exercise than Show Springers. If you have a fenced in yard, your Springer will be quite capable of looking after some of his own exercise needs. Give him a ball to play with, or a chew toy and he’ll happy pass the time while you go about your business. He will also appreciate a daily walk of a mile or two as well, though.

If you are feeding on a schedule, most adult English Springer Spaniels should be given a cup and a half to two cups of good dry food daily, spread over two meals. Of course, this will vary according to your dog’s size, metabolism, age and activity level. Puppies may require up to four cups of food per day.

English Springer Spaniels are double-coated dogs, with a soft undercoat and a medium-length topcoat. This goes a long way to waterproofing the Springer. The top coat will be heavily feathered on the legs, belly, chest and ears.

Springers come in several colors, but you’re probably most familiar with the black and white variety. Some may also be white with liver markings, and others might be liver roan (a mix of colored and white hairs) or blue (a dilution of black). Tricolor varieties are usually black and white or liver and white with tan under the tail, inside the ears, and on the cheeks and eyebrows.

A Springer requires regular brushing (3 times a week at least), and can be expected to shed a fair bit. Springers can benefit from regular trimming in the feathered areas, and many owners schedule a visit with a groomer every few months in order for their Springer to maintain a neat appearance.

Care of the ears is very important, and you should clean them weekly in order to prevent infections. Just wipe the ear gently with a cotton ball dampened with a vet-recommended ear cleaning solution. Only clean the part you can see, and never insert anything into the ear canal. While you’re cleaning your dog’s ears, also check for inflammation and/or odors that could indicate infection.

All dogs should have their teeth brushed regularly in order to prevent bad breath, tooth decay and gum disease. If you can brush every day, that’s best, but if you can’t, you should at least try for two or three times a week. Most dogs don’t mind having their teeth brushed provided you start doing it when they’re young, and there are all kinds of toothpastes on the market in flavors dogs love.

If your dog doesn’t do a lot of walking on hard surfaces, which would work to naturally wear his nails down, they will need to be trimmed. Again, this is something that is best started early, so when your Springer is a puppy, get him used to having his toes handled. If you’re not sure how to clip his nails, you might want to visit your vet or groomer for the first trim, so that you can see how it’s done before you attempt it yourself.

English Springer Spaniels are usually good with kids if they are introduced to them at a young age. An older Springer may prefer older children, though. And, as I’ve said many times before, you need to train your kids as well as your dog – there should be no biting or pulling by either the kids or the dog! And of course, don’t leave young children unsupervised with any dog, no matter the breed and no matter how gentle you believe the dog to be.

As to other animals, Springers are usually good with other animals, even small ones. The only issue might be if you have pet birds – a Springer is hard-wired to view birds as prey.

English Springer Spaniels are energetic dogs that are used as gun dogs for hunting, and they are also very popular among the dog show set for their handsome appearance. Springers also make loving companions, and are generally friendly and easy to socialize. Even a novice dog owner will do very well with the gentle, cooperative Springer.