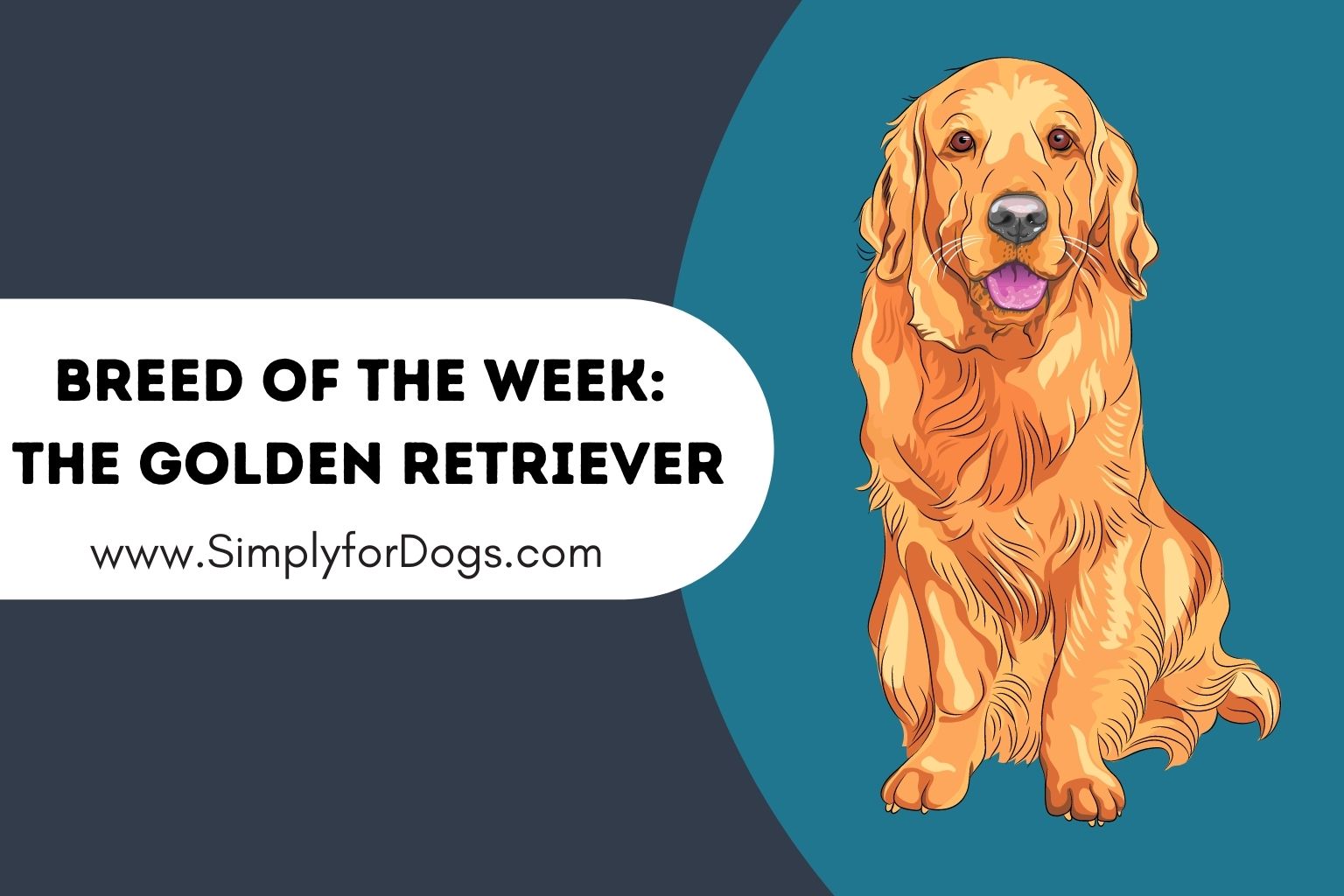 So, given that the Golden Retriever is a very popular breed (and that Goldens are not, by any stretch of the imagination, any more prone to bite than any other dog), I’m giving this week’s “Breed of the Week” post to the beautiful Golden Retriever.

The Golden Retriever is one of the most popular breeds, given that it is extremely intelligent and tolerant. This makes the Golden an outstanding family pet, and a great working dog as well. The retriever is agile, intelligent, loyal and very friendly. Naysayers will tell you that the Golden matures slowly, and tends to hang onto puppyhood a lot longer than other breeds, but people who love Goldens will tell you that they’re more than willing to wait for them to grow up and act their age!

Originally, Goldens were bred to retrieve; they love water and have no trouble wading in to fetch a bird felled by a hunter. They thrive on exercise, both mental and physical, so if you’re not using your Golden for hunting, you should be prepared to wear him out in other ways. Many Golden owners will tell you, “If he’s worn out, he’s happy.”

Golden Retrievers are also very much family dogs, so in addition to exercising him, you’ll have to make sure that he has plenty of time with his “pack.” In other words, he’s going to want to be with you 24/7, and is probably going to want to be underfoot.

If you’re considering a Golden, you’re also going to have to understand that he’s not going to be much of a watch dog. Because of his very friendly nature, the Golden will probably allow anyone into your house. There are no burglars, just friends he hasn’t met yet!

The other thing you need to know about the Golden Retriever is that he is a profuse shedder, particularly in the spring and fall. You’ll have to brush him every day, but even that won’t alleviate the problem of having to sweep up after him constantly. Most Golden Retriever owners will tell you that every day, they’ll sweep up enough hair to build another dog.

Goldens are also very active, and will need about an hour of very vigorous exercise every day. So if you’re kind of a “lay back and let the dog do his thing” person, a Golden is not the right dog for you.

If you have kids, a Golden can be a great dog. They’re gentle and kind, but they can be boisterous, so be sure to supervise them around small children.

Golden Retrievers were believed, for a long time, to have been descended from Russian Sheepdogs. This is actually not true. The breed originated in Scotland around the mid-1800s, and is believed to be a cross of the Tweed Water Spaniel (which is now extinct) and other dogs. They became known for their hunting sills, and in 1911, the English Kennel Club recognized the breed. In 1932, the American Kennel Club also recognized the breed, and today, the Golden is the second most popular dog breed in America.

Male Goldens are typically about 24 inches tall, and weigh up to 75 pounds. Females are usually a bit shorter and weigh in at 65 pounds, tops.

Goldens are typically calm and sweet-natured, and eager to please. As is the case with all dogs, though, early socialization is important.

Goldens are far less prone than other purebred dogs to inherited diseases. However, they can be prone to Von Willebrand’s disease, elbow dysplasia, cataracts and hypothyroidism.

The Golden Retriever is a dog that loves exercise, so if your passion is jogging, rollerblading or hiking, then the Golden is the dog for you. Whatever exercise you enjoy, the Golden will be happy to accompany you. They also love to play fetch.

Usually, a Golden will need a lot of vigorous exercise in any given day, and if you slack off, he could become irritable. Goldens are also “mouthy” and they’re the most happy when you give them something to carry, whether it’s a newspaper, a ball, or other object.

Goldens grow fast, especially between the ages of four to seven months. Don’t let him play on hard surfaces until his joints are fully grown, usually at the age of about two years. Otherwise, he could develop bone disorders.

Anyone who ever reads my posts knows that I free-feed my dogs; I let them decide how much they want to eat and how often they want to eat. It works for me; my dogs almost always live to a very old age and never have weight problems. However, if you want to regulate feeding your Golden, you should offer about three cups of good dog food each day, delivered in two meals. Keep in mind, though, that how much your dog is going to eat will depend on his age, his size, his build, his activity level and his metabolism. Dogs are like people in that they don’t all have the same dietary requirements.

So, if you’re going to “ration” your Golden, make sure that you don’t leave the food out all the time. Give him what’s required for his age, size and weight. And if you think he might be underweight, up the feed. To know if you’re getting it right, look at your dog. Can you see his waist? If you press your hands on his back, can you see his ribs? If you can, he’s not getting enough food. If you can’t, you should cut back on the food and make sure that he gets more exercise.

Golden Retrievers have water-repellent coats with an undercoat, and feathering on the back and front legs. As previously mentioned, they will shed at certain times of the year. You should brush your Golden every day, and give him a bath once a month. This will keep him looking good and smelling clean. Keep in mind, too, that since the ears of your Golden “fold over,” that’s a breeding ground for fungus and bacteria, and could cause ear infections. Any time his ears get wet, you should check them out and treat them with an ear cleaner. That doesn’t mean that you should put anything in the ear canals, just that you should clean out his outer ear.

As to brushing, Goldens love being brushed! And they’ll be more prone to enjoy the other things that go along with being brushed if you start them when they’re puppies. In other words, when you’re grooming, touch his feet frequently, and open his mouth to check his teeth. If he connects these “less desirable” activities with the pleasure that comes with grooming, he’ll be more receptive to them later on.

Also, while you’re grooming, check for any rashes, sores or other signs of infection. Health problems that are caught early on are more easily treated.

Most of the time, a Golden Retriever is going to get along just fine with kids, but keep in mind that this is a sizeable dog. In other words, he could knock over a kid without really meaning to. I’ve pointed out before in previous posts that you should never leave any dog, of any breed, alone with a kid, and this even goes for the gentle Golden Retriever. He’s big. He’s strong. Enough said.

Teach the kids, too, that it’s not a good idea to tease the dog, pull on his tail or ears, or otherwise do things that kids wouldn’t like to have done to them. Also, tell your kids not to try to take the dog’s food away; it doesn’t matter how friendly the dog is, he might not react well to that. And again, never, ever leave a kid alone with a dog no matter how gentle the dog might be.

As to other pets, Goldens are usually pretty good that way. They usually enjoy the company of other dogs, and even cats.

Why not? It’s hard sometimes to understand why anyone would let a Golden Retriever go, and, yet, there are Goldens who end up in rescue facilities, and who need to be fostered or adopted. A simple Google search using the terms “Golden Retriever rescue” will yield a number of sites that are devoted to rescuing Golden Retrievers. You can use the same criteria to find other dogs of other breeds that need to be rescued.

Whether Golden Retrievers are your passion, or you love another breed, there are opportunities to rescue; and they are legion. So if you have room in your heart for a rescue dog, consider a Golden Retriever from a rescue site. Or another breed that tugs at your heartstrings and needs you. You’ll get a friend who will love you and be grateful forever.