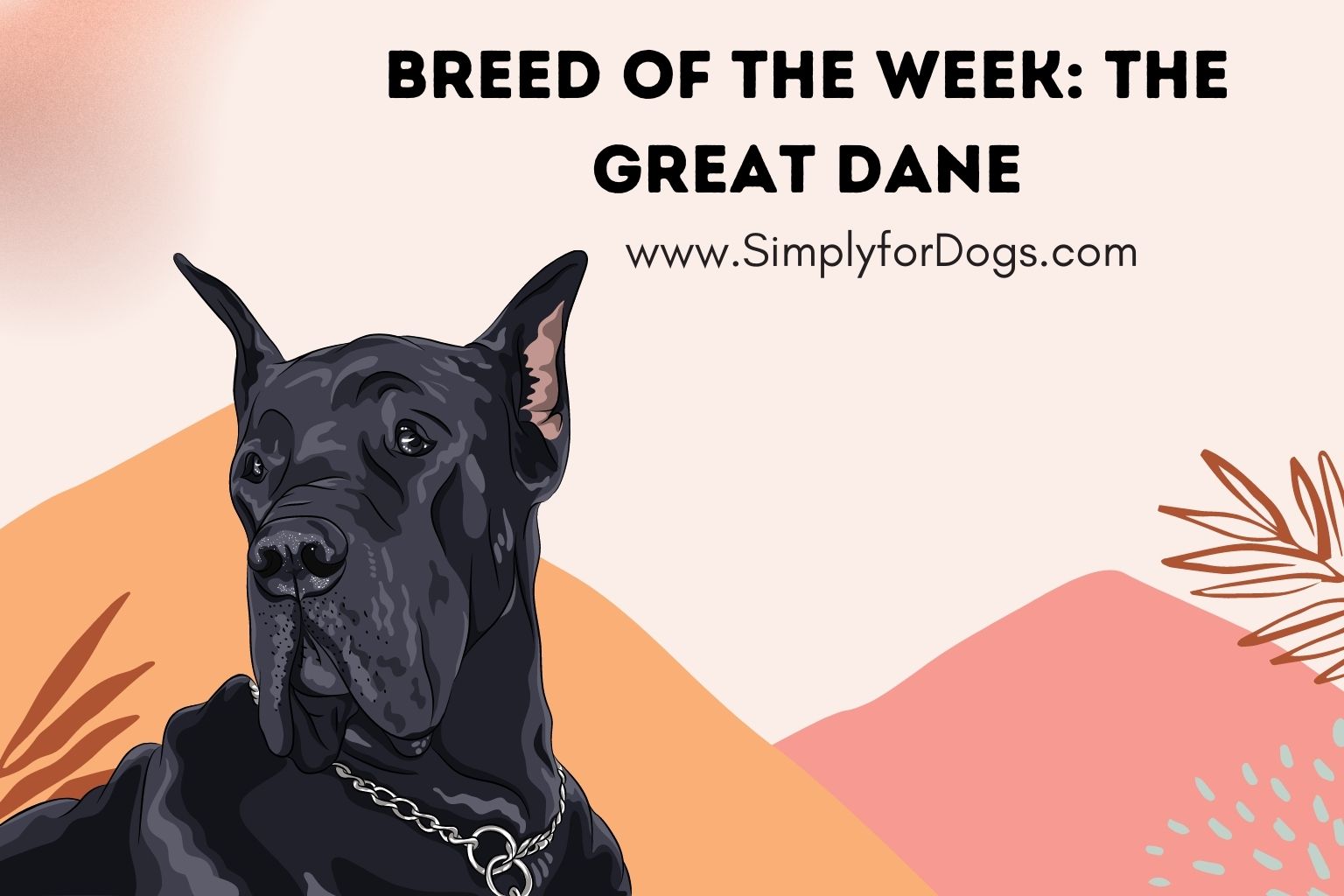 This week, I’m devoting my “breed of the week” post to the Great Dane, the gentle giant. Big, noble, and magnificent, this breed of dog looks very imposing, but he’s loving, affectionate, and great with kids.

Great Danes were originally bred as hunting dogs, specifically for wild boar. Realistically though, he probably wouldn’t make much of a boar hunter today, since the aggressiveness that was needed back then has been mostly bred out of the Great Dane. The Great Dane as we know him today is so gentle and sweet, he’d probably be more likely to try to make friends with the boar than to hunt it down and kill it.

That said, this is still a dog of size and power, so if you want a good dog for protection… well, let’s just say that it would be a pretty stupid assailant who tried to get the best of your dog.

The Great Dane originally came from Mastiff-type breeds but is considerably sleeker. He has a long body and a huge head, as well as a graceful, long neck.

You’ll probably never have a problem regarding temperament with a Great Dane, but you do have to keep in mind that this is a dog that will weigh probably at least as much as you do. He can knock you over, and he can knock your stuff over. That means that he’s not well-suited to small spaces. This is, fortunately, offset by the fact that the Great Dane isn’t overly energetic or rambunctious.

Sweet as he is, though, the Great Dane will not hesitate to protect you. So, you don’t want him to misinterpret things – he needs to know which people are friends. Socialize early, in other words.

If you have decided to love a Great Dane, one thing that you need to know is that you will not have him for long. This is not a long-lived breed. The Great Dane, unfortunately, has a lifespan of only about eight years.

The Great Dane is an old breed. Illustrations of dogs resembling Great Danes have been found on artwork as far back as 3000 BC. It’s believed that the Assyrians brought dogs of this type to Greece and Rome, where they were bred with other dogs, probably including the ancestors of the English Mastiff and Irish Wolfhound.

In the latter part of the 15th century. German Nobles began to keep Dane-like dogs in their homes. They refined the breed to the point where it became the dot that is so popular today. Breed refinement continued throughout the 1800s, and in 1889, the AKC recognized the breed. 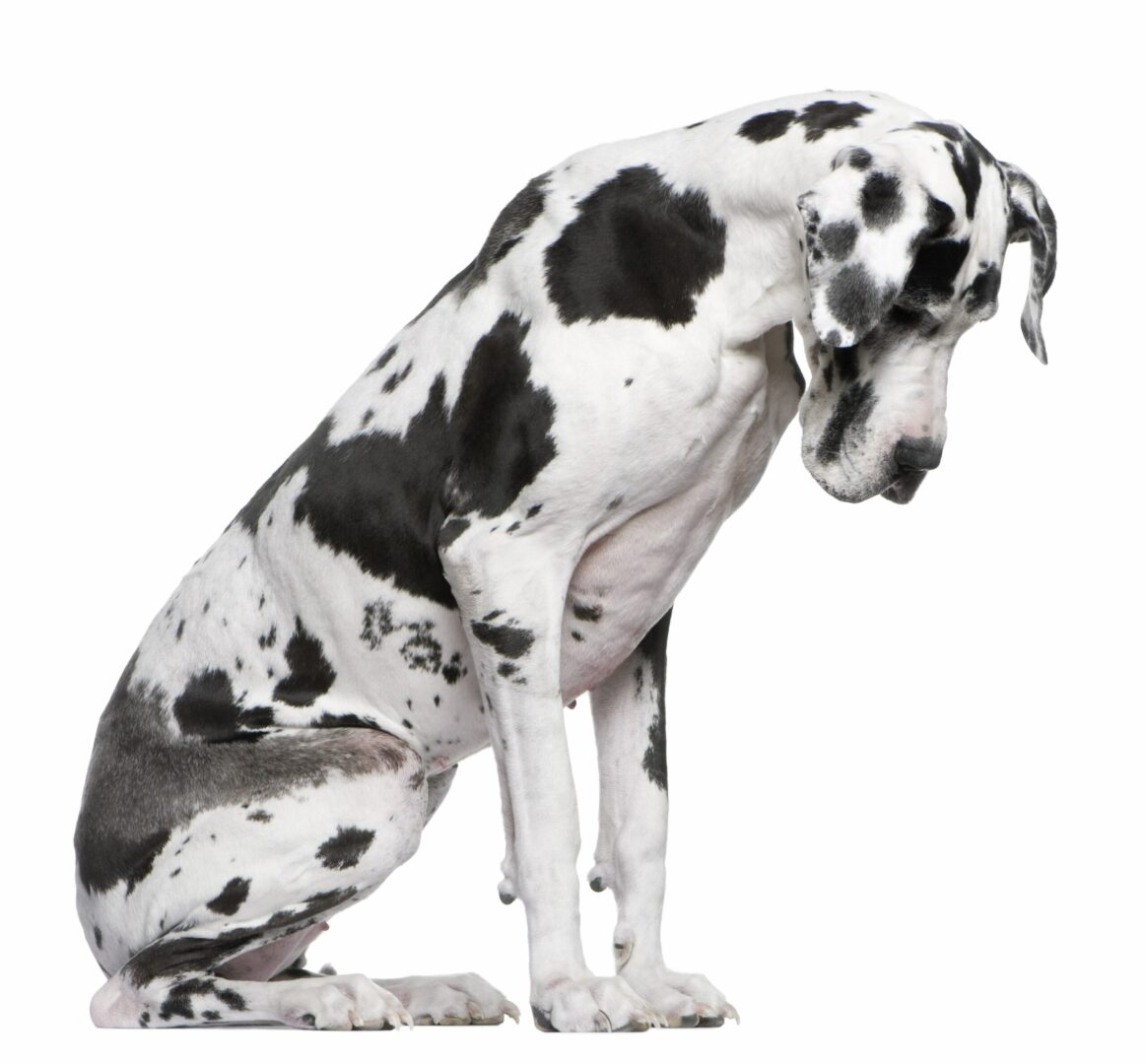 Some dogs are a bit aloof with strangers, but that’s not the Great Dane. To a Dane, there are no strangers – just friends he hasn’t met yet. He’llgreet visitors enthusiastically. That doesn’t mean he’s a weenie, though – if he thinks that someone intends you harm, all bets are off, and he’ll defend you with every fiber of his being.

I’m always telling you that dogs are not meant to be left out in the yard, and this is particularly the case of the Great Dane – he wants to be where you are. So don’t leave him tied out unless you want to break his heart.

Another thing about Great Danes is that they want to be lap dogs – lap dogs that can top 200 pounds easily. If you can’t handle that, then train your Great Dane puppy very early on to learn that your lap is not a place to be.

As is the case with all dogs, Great Danes need early socialization. It’s a good idea to enroll your Dane in puppy kindergarten so he can learn how to get along with other dogs. Also, take him all kinds of places where he can meet people – the park, the convenience store, the neighborhood – in short, anywhere that he can meet people. The last thing you want is a really, really big dog that’s people-shy.

Great Danes are usually healthy, but like all large dogs, they can be prone to hip dysplasia. This is a condition where the hip and thigh joints don’t connect properly. It’s not something that can be identified right off in a Great Dane puppy since it usually doesn’t manifest until the dog is approaching maturity. The best way of ruling out the possibility of hip dysplasia is to ask your breeder for clearances on the parents – if the parents are free of hip dysplasia, chances are that it won’t be a problem in your puppy.

Another issue that can happen with big breeds is gastric torsion, also known as bloat. This occurs when the stomach twists and the dog can’t vomit or burp to get rid of the excess gas in the digestive tract. It can be fatal. This isn’t something that’s genetic – it’s just the province of large dogs. So if your dog seems to have a distended abdomen, is lethargic, retching without vomiting, or has a rapid heart rate, suspect gastric torsion, and get him to the vet right away.

Bone cancer is also relatively common in large dogs, usually as they reach their middle years or beyond. The first indication of bone cancer is lameness, and it’s often overlooked in very athletic dogs. The owner thinks, “Well, he jumped over all kinds of obstacles, so it’s probably a sprain.

Maybe not, so don’t take the chance. Any sign of lameness in a large dog is cause for a trip to the vet.

Now, all that said, there’s no guarantee that your Great Dane will ever develop any of these issues. They’re just things to keep in mind.

Great Danes need to be exercised – usually about half an hour to an hour of walking will do the job. Puppies and adolescents should be exercised for an hour and a half daily.

Great Danes are easy to potty train, especially if you use a crate, but you shouldn’t crate your dog for long periods of time. If you do, then it’s not training – it’s punishment, and your dog won’t understand why you’re doing that to him. Never crate your Great Dane for more than an hour at a time.

As to feeding, it’s imperative to make sure that a large-breed puppy has enough to eat. Usually, any type of puppy chow is good for a growing dog, but with a Great Dane, it’s best to use food that is specially made for large breeds.

If you like, you can free-feed your Dane. They’re not known to be gluttonous, and will usually only eat as much as they need and no more.

If you do feed on a schedule, though, don’t feed the full daily amount all at once. This is because of the danger of gastric torsion.

Great Danes come in fawn, brindle, blue, black and harlequin. Danes will shed a fair bit, but it’s not hard to keep the shedding under control – just brush regularly, and that’s pretty much all you’ll need to do. You won’t need to bathe your Dane unless he gets into something really nasty.

All dogs should have their teeth brushed regularly – daily is best, but if your dog hates having his teeth brushed, just try for two or three times a week.

You should also trim your Great Dane’s nails if he’s not accustomed to walking on hard surfaces that will wear them down. If you’re not sure how close to cut the nails, a visit to a groomer for the first trimming would be a good idea – the groomer can show you how far to cut.

Also, check your Great Dane’s ears once a week to see if there’s any odor or redness that might suggest an infection. Clean them, too, using a cotton ball dampened with a vet-approved ear cleaner. Don’t use alcohol or Q-tips.

When grooming, you should also look out for any rashes or sores, inflammation, or discharge in the eyes, nose or ears. If you do this weekly, you can prevent serious problems later on.

You really shouldn’t have any issues here. Great Danes typically love kids and are very gentle with them. That said, though, I’m always telling you never to leave a child alone with a dog, no matter how gentle that dog might be, and it still applies when it comes to Great Danes.

Danes are generally good with other pets, but it’s worth keeping in mind that every dog is an individual – you could end up with a Dane that wants to be “the only one,” so when you’re introducing your Great Dane to other animals, do it gently and slowly. It’s usually best to introduce a young animal to an older one, gradually, rather than bringing an older animal into the household.

Great Danes are typically gentle, great with kids and other animals, and good with strangers as well. Early socialization is important, though. These gentle giants make wonderful family pets, but treat them as you would any other dog, and make sure they’re well socialized.