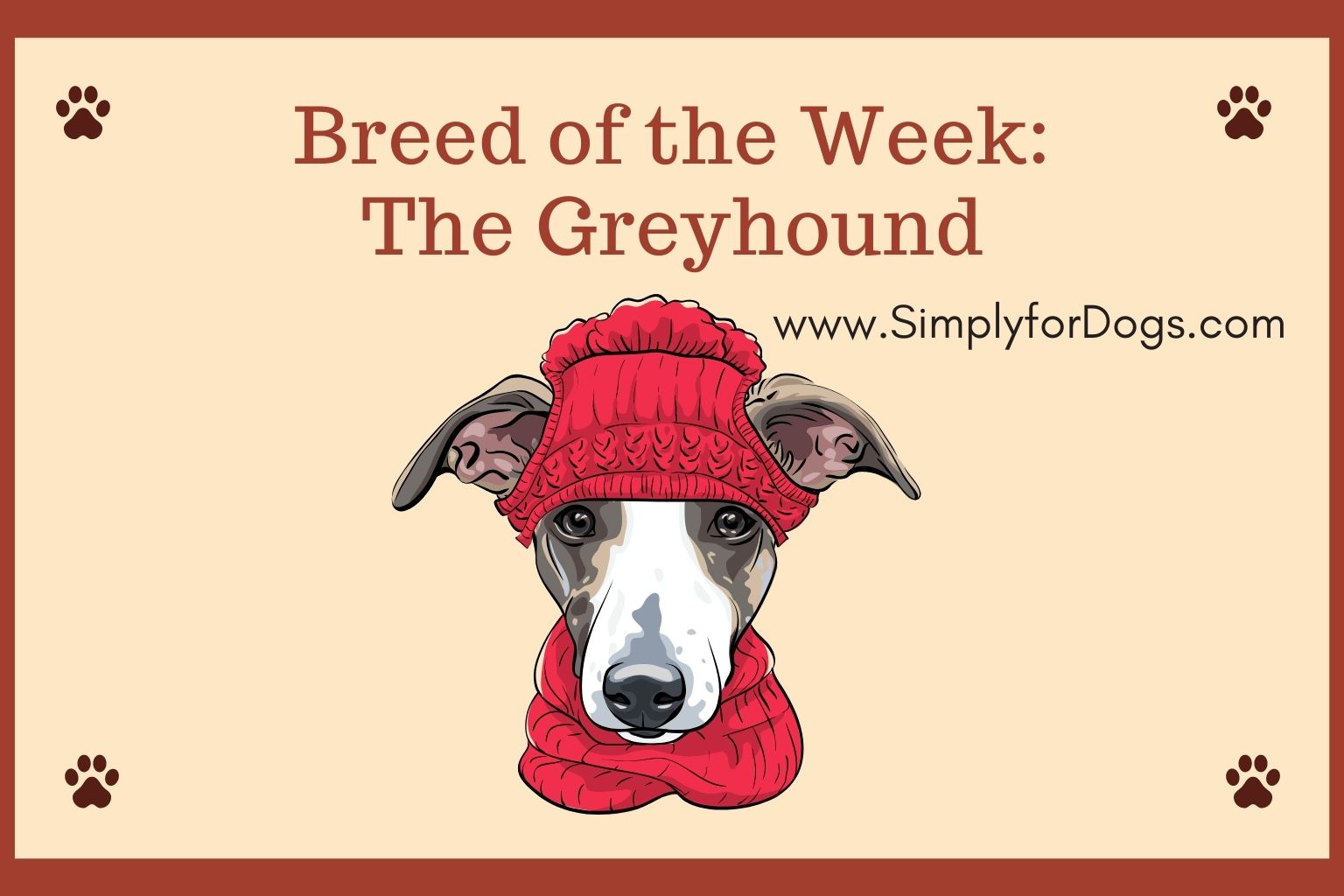 Most of us know the Greyhound as a racing breed, and typically think of it as chasing mechanical rabbits around a track. However, the mechanical rabbit is a modern construct, having little to do with the original purpose of the breed, which was to chase small game like rabbits, as well as larger animals like deer and foxes. Today, the Greyhound is still athletic, being used for coursing, agility, and other activities. Most people, though, just love the Greyhound for his sweet nature.

The Greyhound originated in North Africa and the Middle East. It also enjoys the distinction of being the only breed to be specifically mentioned in the Bible (Proverbs 16:14).

During the Dark Ages, Greyhounds came to Europe. Their hunting ability was so renowned that they were reserved for kings, and no one who lived within 10 miles of a king’s forest could own a Greyhound.

As the popularity of the Greyhound continued to grow in Britain, the Spanish also discovered the breed. British colonists brought them to America, and in fact, the Greyhound was among the first dog breeds to show in the United States, with the breed being AKC-recognized in 1886.

Greyhounds are very athletic, sleek dogs. There are two different kinds of greyhounds, though, and they vary a bit in size. A racing Greyhound will usually stand 25-29 inches at the shoulder. A show Greyhound, on the other hand, will be close to 30 inches. In either case, males will weigh 65-85 pounds, and females 50-65 pounds. The racing dogs will weigh in toward the lower end.

Greyhounds are known for their good temperament. They’re typically non-aggressive and friendly, although sometimes they can be a bit wary of strangers. They’re easily bribed, though, so if you offer one a treat, he’ll most likely quickly become your friend.

Greyhounds are very smart, and also independent, but they can also be sensitive. They have their feelings hurt easily, and don’t respond well to authoritarian treatment.

When choosing a Greyhound puppy, the standards are pretty much the same as they are for any other dog; look for one that’s friendly and curious, not one that’s “hanging back” or seems overly shy.

Keep in mind, too, that there are a lot of factors that affect temperament. Practically any dog will benefit from early socialization – being exposed to all kinds of people and situations in the early months.

Greyhounds are among the healthiest dogs that you will ever find but as is the case with any breed, there are somethings that you will need to watch out for. As the Greyhound is a fairly big dog, hip dysplasia will be a concern. Having said that, many dogs with hip dysplasia have perfectly happy, long lives. You shouldn’t breed a Greyhound (or any other dog) that has hip dysplasia, but it’s not a death sentence; most of the time, a dog with this disorder will display no symptoms at all. Other times, there might be mild pain similar to what you would expect with arthritis, and it can be controlled with medication. Very rarely, surgery might be needed.

The other thing with Greyhounds is that they can be sensitive to anesthesia. Because of the breed’s lack of body fat, too much anesthesia during surgery can be dangerous. A competent veterinarian, though, will know this and will adjust the level of anesthesia your dog receives to a safe level.

Greyhounds can also be prone to hypothyroidism, which is a condition in which the thyroid gland is underactive. This condition can be corrected with medication.

The worst thing you’ll have to worry about is something that is, sadly, common to many large breeds: bone cancer. Now, I’m not telling you that your Greyhound is doomed to get this disease, just that it’s a possibility with almost any big dog. If your Greyhound appears to be lame, take him to the vet immediately to get a proper diagnosis.

Bloat is another problem that is fairly common in large dogs. It happens when gas or air builds up in the stomach, and the stomach twists. Surgery is usually needed.

Greyhounds, despite their history of racing, are actually low-energy dogs. They like to go for walks, but you don’t have to be constantly active with them.

One problem with Greyhounds is that they have a very high prey drive, so you’ll need to keep your Greyhound confined if you don’t want him to take off in search of other animals. Construct a sturdy fence, and don’t waste your time with electric wire; your Greyhound will happily take a shock if it means he can get out and chase down another animal. 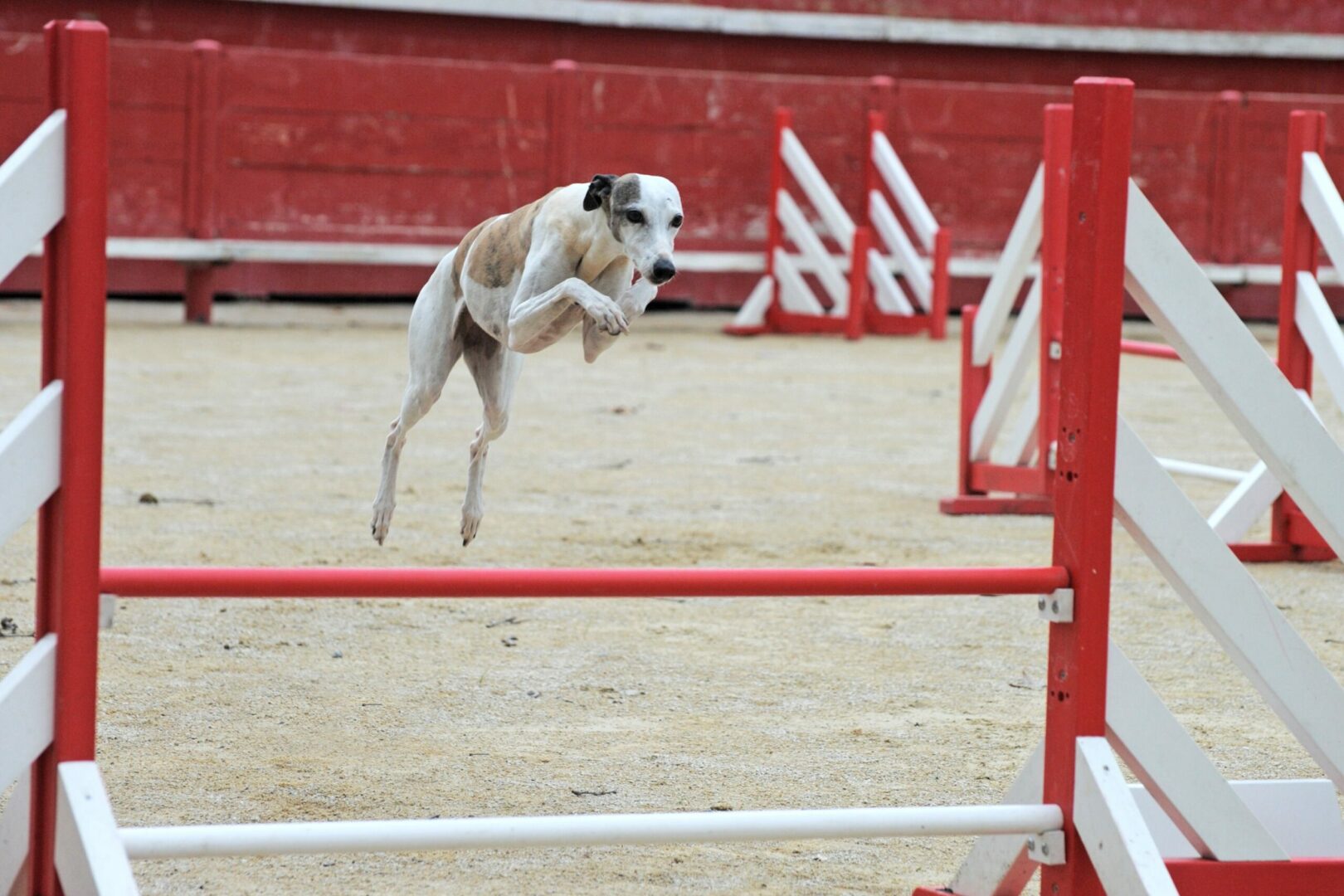 You should also keep your Greyhound on a leash when you’re walking him, again because of the prey drive. If he spots something that he wants to chase down, all the commands in the world aren’t going to stop him.

Ideally, you should start training your Greyhound the minute you bring him home. The breed has a tendency toward stubbornness, and needs a confident, strong owner. This doesn’t mean that you should be harsh with your Greyhound, though. Positive reinforcement is always the best way.

Greyhounds aren’t known to be gluttons, so if you’re like me and prefer to free feed, you can do it. If you want to feed on a schedule, though, a good rule of thumb is 3-4 cups of quality food per day for males, offered over two meals, or a cup and a half to three cups for females.

Of course, much will depend on the individual dog. If your Greyhound is very active, you’ll want to go on the high end of the scale. If he’s more of a “cuddle up with Mom or Dad and snuggle” sort of dog, scale it back a bit.

Greyhounds are really easy to groom, since they have short coats. As to color, they pretty much run the gamut, with coats in gray, black, fawn, blue, red or white. Even though you don’t need to groom much, your Greyhound will still appreciate the occasional brushing; it feels good, and it’s a great way to bond with your dog.

As to your Greyhound’s ears, clean them out once in a while, but only use cotton balls. Q-tips can damage the ear canal.

It’s also a good idea to brush your Greyhound’s teeth from time to time. Dogs are no different from humans in that bad dental care can lead to tooth decay and gum disease.

Also, trim your Greyhound’s nails periodically, unless he often walks on hard surfaces that wear them down naturally.

I know that I’m always telling you not to leave a dog and a kid unattended, and I’m not going to change my mind here. Greyhounds are very patient dogs, and generally good even with small children, but any dog is going to have his limits. Most of the time, a Greyhound will just walk away from an annoying kid, but there’s still a chance that he might snap, and I’d really hate to see a dog put to sleep or re-homed through no real fault of his own.

Teach your kids to be respectful of the dog – not to approach him when he’s sleeping, try to take his food, pull his ears or tail, or anything else that could cause an otherwise good dog to react badly.

As for other pets, Greyhounds are usually pretty good with other dogs of the same size. However, they might see smaller dogs (or cats or rabbits) as prey. So if you have other, smaller pets, supervise them with your Greyhound the same way you would your kids. And keep in mind too, that even if your Greyhound absolutely adores your cat, he might see the neighbor’s as prey.

Greyhounds are sweet-natured dogs, and very good family pets, generally speaking. However, they’re not always good with other animals. So, if you’re planning on adding a greyhound to your family, understand that this is a breed with a high prey drive, and proceed accordingly.