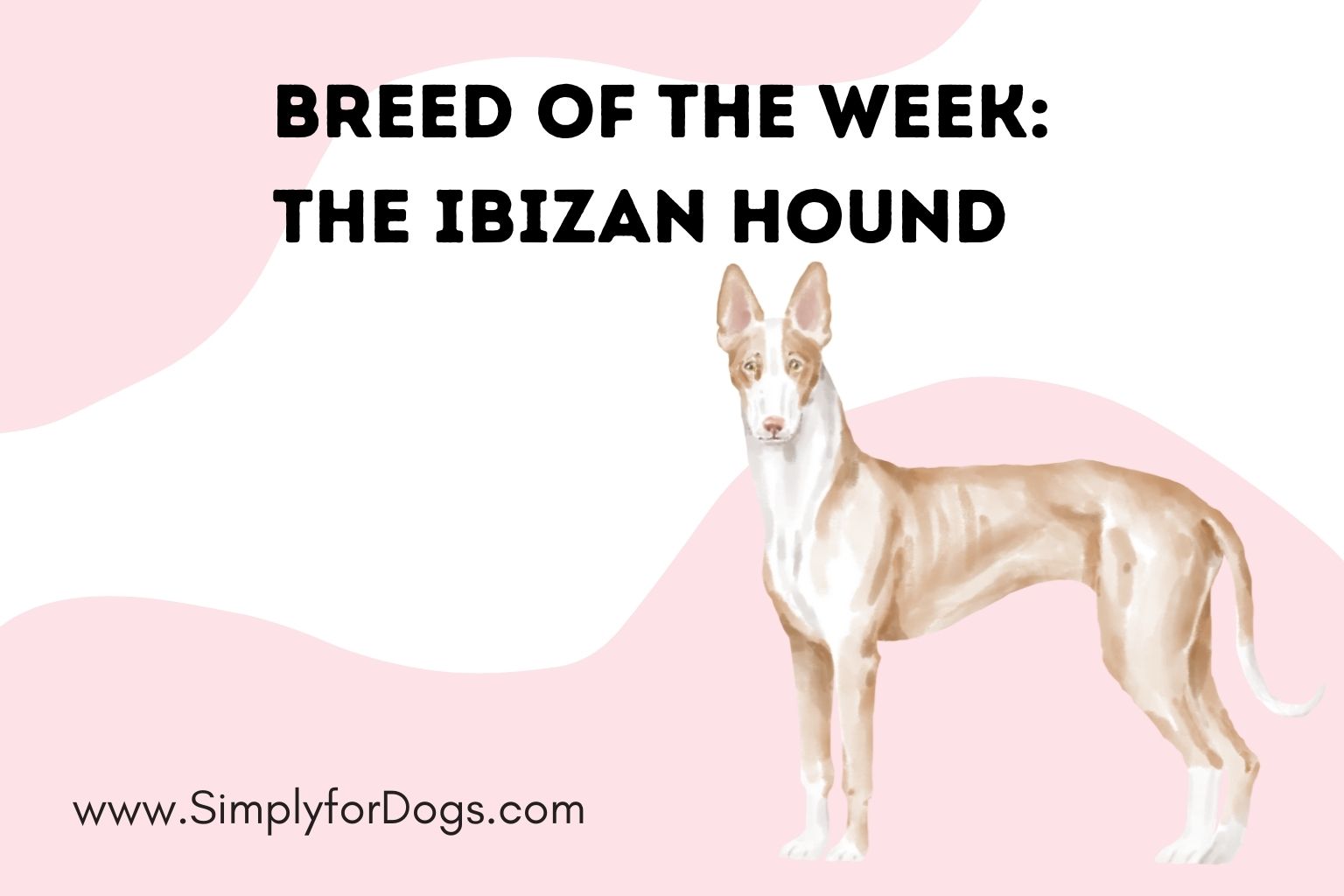 The Ibizan Hound (often affectionately referred to as the Beezer) is an unusual looking dog that originated on the Spanish island of Ibiza. He was originally used for hunting, and still is, although now you’re more likely to find the Ibizan Hound used for obedience, lure coursing, conformation, tracking and agility. He also makes a great family pet.

The Ibizan Hound is an old breed with lovely red and white markings and huge, erect ears. To say the least, he’s a unique looking dog, and he also has a wonderful personality. His most pleasing characteristic is his wonderful personality – he’s not shy, but he’s not aggressive either. The Ibizan is built for speed and determination, which is what makes him so skilled in agility events. He’s also a jumper, so if you have an Ibizan, you’d be well advised to have a tall fence.

The breed has a strong prey drive, and might not be suited to families that have smaller pets, although an Ibizan will usually get along well with other dogs.

The Ibizan Hound is a very old breed, and closely related to the Pharaoh Hound. Representations of Ibizan-like dogs were even found in King Tut’s tomb.

So how did the Ibizan end up in Spain? It’s believed that the Phoenicians may have transported Ibizan-like dogs to Spain in the 8th and 9th centuries. They probably had a pretty hard life on the Spanish island, being used mainly for hunting. Centuries passed, and in 1956, the breed was brought to America by Colonel Seoane and his wife. They imported a pair which produced a litter. The offspring later bred with other imports, and formed the foundation of the Ibizan breed in the US.

In 1979, the Ibizan Hound was recognized by the AKC. It is still a very rare breed, ranking 138th in popularity among the 155 AKC-recognized breeds. 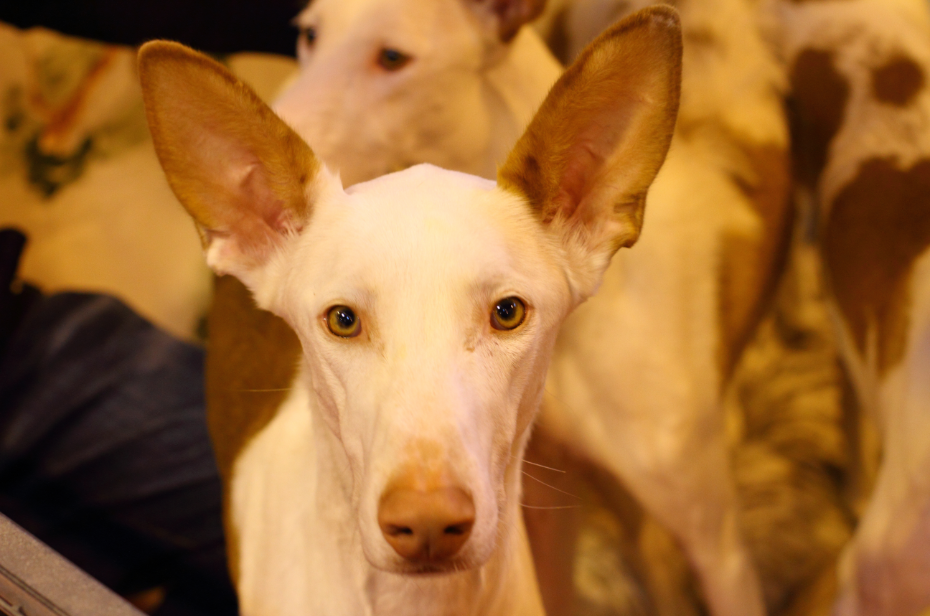 Male Ibizan Hounds typically stand 23 ½ to 27 ½ inches at the shoulder, and weigh in at about 50 pounds. Females stand anywhere from 22 ½ inches to 26 inches, and weigh around 45 pounds.

Ibizan Hounds are very lively, and have a strong prey drive. If it’s smaller than the dog, and looks like it might be good to chase, the Ibizan will go after it. He has a wonderful sense of hearing (perhaps thanks to his huge, pointed ears) and because of this, he makes a great watchdog.

The breed is generally non-aggressive, but might be a bit aloof with strangers to start with. Once he gets to know someone, though, the stranger becomes a friend.

The Ibizan is typically sweet-natured, but it’s worth mentioning that a number of things can affect temperament. As is the case with choosing any dog, if you’re looking at Ibizan puppies, you should view the mother, and if possible, the father. Also try to visit the litter, to see how your puppy interacts with his littermates.

Given that the Ibizan is a rare breed, this might not always be possible. You might have to travel some distance to get an Ibizan. If this is the case, ask the breeder to send you videos of the puppies. If you perceive a reluctance on the part of the breeder, it might be best to look elsewhere. Unfortunately, there are scam artists out there, and many of them make a very good living “selling” puppies that don’t even exist.So, don’t let your heart lead you in the wrong direction.

Once you have your puppy, make sure to socialize him properly. Expose him to as many people, places and experiences as you can. Invite the neighbors over, take him to the park, bring him to stores that welcome dogs, and so on. Anything you can do to help your dog build his social skills is time well invested.

32 Dog Breeds Without Many (or Any) Health Issues
Group Spotlight: The Hound Group and 5 Unique Breeds Found Within It
15 Most Posh Dog Breeds

Generally speaking, Ibizan Hounds are healthy. There’s no such thing as a perfectly healthy breed, so here are some things to watch out for.

Sometimes, people think that only big dogs develop hip dysplasia. It’s not true – even a Chihuahua can have the disorder. Unfortunately, there’s no way of identifying the condition in puppies, since it typically won’t show up until the dog is at least two years old. The condition is hereditary, so the best way of ruling it out in your puppy is to ask for proof that the parents are free from the disorder. Keep in mind, though, that even this is no guarantee.

Seizures can also be hereditary. They can also be caused by metabolic problems, tumors, exposure to toxins, and head injuries. They can also have no apparent cause at all. Ibizan Hounds are a bit more predisposed to seizures than other breeds, but it’s not generally something that you’ll have to worry about.

Many dogs are prone to allergies. They could react badly to certain foods, chemicals, shampoos, flea powders, mildew, dust and various other substances. Allergies are generally treatable without too much difficulty.

Cataracts are growths on the lens of the eye that can impair vision, and even lead to total blindness. They can usually be surgically removed. Even if your Ibizan Hound does go completely blind, though, keep in mind that his other senses will work to compensate his loss of vision. You don’t have to consider blindness to be a death sentence – just avoid moving the furniture around.

Ibizan Hounds can be a bit more prone to deafness than other breeds. You can have your puppy tested when he’s young to find out if his hearing is impaired. As is the case with blindness, it’s not a reason to consider putting your dog down. Just watch him in traffic and other situations where his hearing might not work to protect him.

This is another eye disorder, and it’s usually present from birth. It can generally be identified at 7-12 weeks, and it can range from mild to severe. It will affect your dog’s vision, but not interfere overly much with his quality of life. If your dog does have this condition, though, don’t breed him.

If you’ve read my other “Breed of the Week” posts, you know that what I’ve offered up here isn’t all that bad. Some breeds have a list as long as your arm when it comes to conditions that you need to watch out for. Others, of course, are incredibly healthy. The Ibizan Hound falls somewhere in the middle.

Keep in mind, too, that these are just things that could happen. They’re not guaranteed. Your Beezer might very well live his whole life in perfect health.

Despite their hunting background, Ibizan Hounds don’t really need all that much exercise. They do appreciate a couple of walks a day, but if you have a large, fenced in yard for your Ibizan to play in, you might not even need to do that.

When you walk your Ibizan, keep him on a lead. This is not a breed that can be trusted off-leash, ever. If your dog sees something that he thinks would be fun to chase, he’ll be off, and no recall in the world is ever going to work.

Ibizans can be quite energetic, but it’s not a good idea to over-exercise a puppy. Ibizan puppies need time for their bones to grow and strengthen before they embrace vigorous exercise, so shoot for no more than 25 minutes of exercise per day.

As is the case with virtually every breed of dog, positive reinforcement is the best way to train. Don’t shout at your dog. Instead, catch him doing something right, and then reward him with a treat. Also keep in mind that Ibizans are easily bored – repetitive exercises aren’t the way to go, so switch it up a bit from time to time.

As to feeding, this is one dog that you can free feed if you like. Ibizan Hounds aren’t gluttonous, so if you want to put food out in a basin and just let him have at it when he feels so inclined, that’s okay. If you do prefer to feed on a schedule (which I don’t do with my dogs, but which many veterinarians recommend), give your Beezer two to three cups of good quality dog food each day, and spread it out over two meals.

Keep in mind that every dog is different – if your Ibizan is very active, go on the high side when it comes to food. If he’s a little more sedentary (and most Ibizans aren’t) then you can go with a bit less food and a bit more exercise.

Ibizan Hounds can be either short-haired or wire-haired. With the wire-haired variety, the coat will be longer on the back, thighs and tail, and he might even have a bit of a moustache. Either way, these dogs are very easy to groom – usually a weekly brushing is enough to reduce shedding, and baths are hardly ever needed unless your Beezer gets into something really nasty.

Of course, as is the case with any breed of dog, if his nails get too long, you’ll need to clip them. Once or twice a month usually gets the job done.

Regular tooth brushing is also a good idea. It’s for the same reason that you brush your own teeth – to prevent gum disease and tooth decay. If you can brush daily, that’s awesome, but if you can’t, at least try for a couple of times a week. If your Beezer simply won’t stand for having his teeth brushed, spread some doggie toothpaste on a rawhide chew and give it to him – it’s better than doing nothing at all.

Ibizan Hounds are very playful, and almost invariably good with kids. They’re usually pretty gentle, but because they do have a prey drive, they might not be all that great with noisy kids that run around a lot.

Every household is different – you might have very young children who immediately get the concept that they have to be gentle with the dog, and that they shouldn’t be acting up. If that’s the case, then I wouldn’t hesitate to introduce an Ibizan into your household. If you’re not sure how your toddlers are going to behave, though, it might be best to wait until they’re a bit older.

I’m always telling you to make sure your kids know how to approach dogs – make sure they don’t disturb the dog when he’s eating, don’t try to take away his food and don’t sneak up on him. I’m also constantly telling you never to leave a dog of any size, age or breed unattended with a child, and it’s no different with a Beezer. If you don’t want something to go wrong, train your dog AND your kids.

As to other animals, Ibizans are usually good with other dogs. They can get along very nicely with cats, too, but it’s usually best to introduce an Ibizan puppy to an adult cat rather than bringing a kitten into a home with an adult Ibizan. If your Beezer knows the animals in your household, everything should go smoothly. Animals that wander into your yard, though, might be considered to be prey, so keep a close eye out.

32 Dog Breeds Without Many (or Any) Health Issues
Group Spotlight: The Hound Group and 5 Unique Breeds Found Within It
15 Most Posh Dog Breeds

Ibizan Hounds are startlingly pretty dogs, with their attractive markings and distinctive ears. They’re also fun, playful, and loving when it comes to their family. They may need a bit of time to get used to strangers, but usually it doesn’t take long. The Ibizan is a rare breed, though, and you might find it hard to get a puppy. If you do, though, you’ll have a wonderful companion.