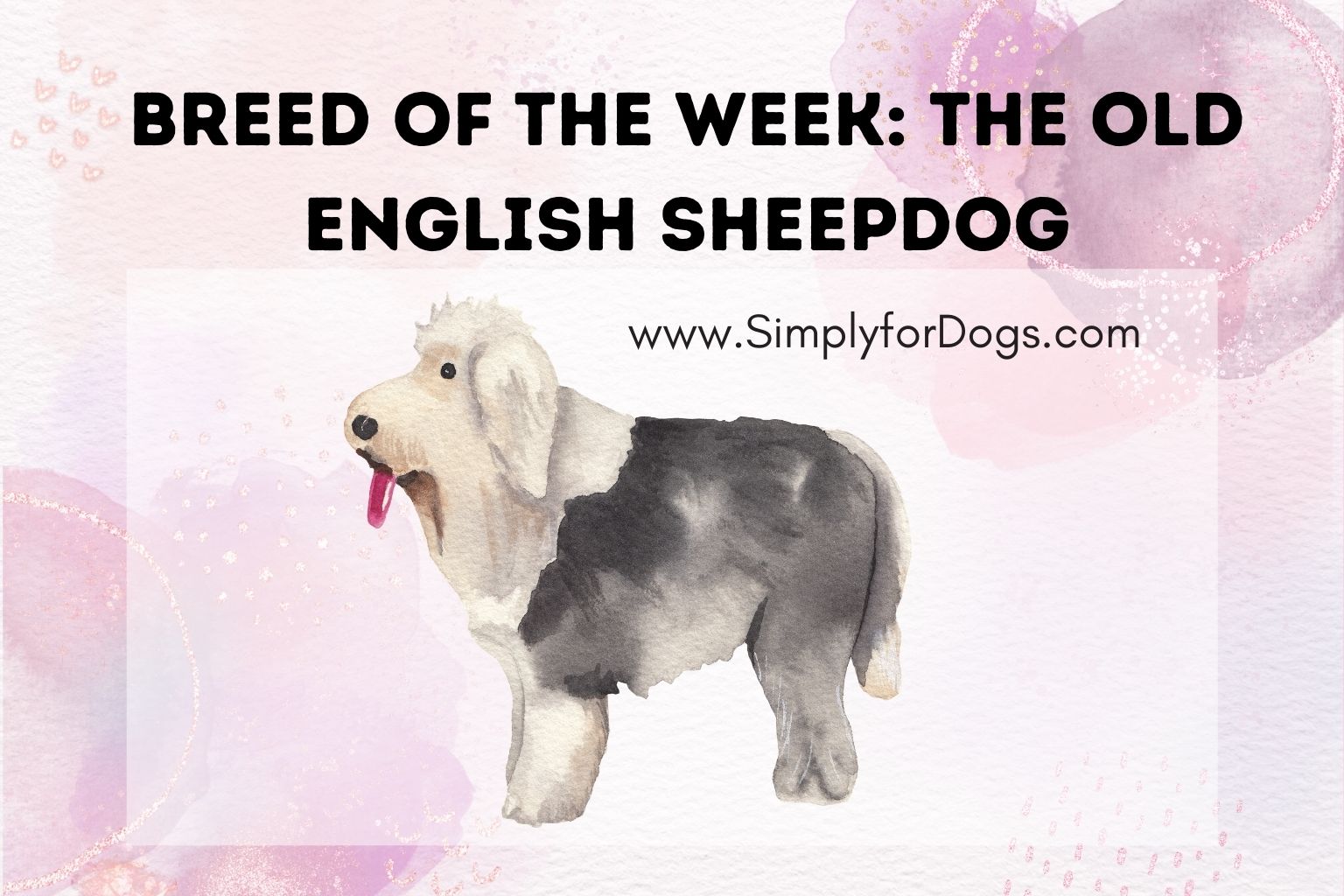 The Old English Sheepdog is a shaggy creature that is usually friendly and a bit clownish. He’s intelligent and fun-loving, and a pretty big dog, weighing in at anywhere from 60 to 100 pounds. His fluffy coat makes him look even bigger.

Usually referred to simply as the OES, this breed of dog is highly protective.

If you choose to own an OES, you’ll have to accept that you’ll be in for a lot of grooming – his shaggy coat requires lots of care. The OES is very trainable and responds well to kind, consistent treatment.

The origins of the Old English Sheepdog are a bit uncertain. It’s believed that he might have originated in southern England, although he might also trace his lineage to the Russian Owtchar or the Scottish Bearded Collie.

The breed came into its own in the latter part of the 19th century, when he came to the United States. An industrialist by the name of W. Wade began to breed the dogs, and by 1904, the Westminster Dog Show recognized the breed.

By 1950, the OES was quite popular, but considered to be a “rich man’s dog.” It wasn’t until the 1960s that the breed became a typical family pet. This was probably due to the long coat of the breed, which required a fair bit of maintenance. 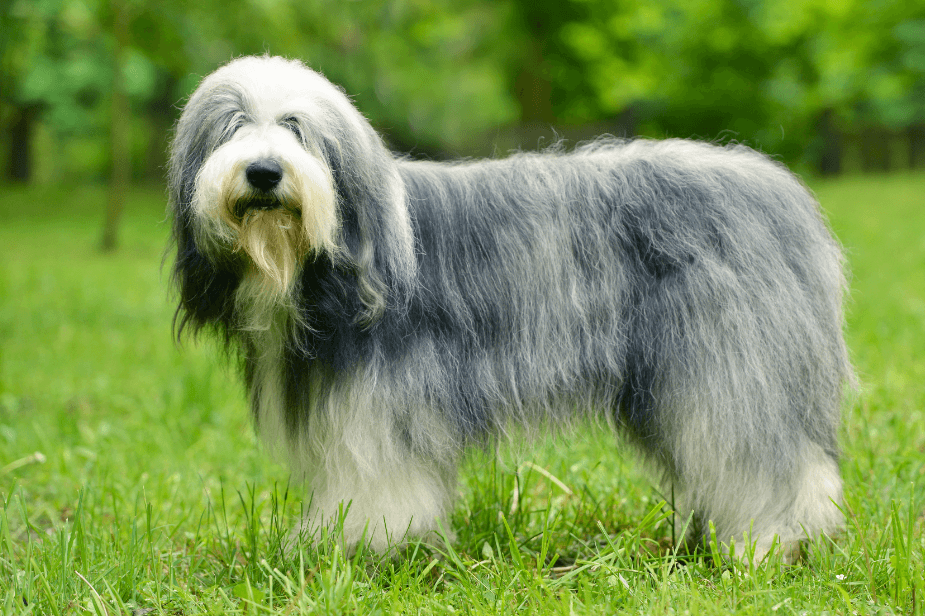 Old English Sheepdogs are playful and affectionate. In fact, they often remain “puppies in their own mind” until they reach the age of 3, and they’ll often continue to be “puppyish” well into old age.

The OES is very smartand learns quickly. He’s well suited to agility, obedience, herding, and even search and rescue.

An OES is usually kind and gentle but can be protective and wary of strangers.

Generally speaking, Old English Sheepdogs are healthy, but they can be prone to some conditions.

One condition that is the province of all large dogs, not just the OES, is hip dysplasia. This condition occurs when the thigh bone and the hip joint don’t fit properly. Some dogs can have hip dysplasia without ever displaying any symptoms, but others might become lame in the hind legs. The condition isn’t identifiable in puppies – usually it doesn’t show up until a dog is a couple of years old. If you’re considering an OES puppy, the best way of ruling out the likelihood of this condition is to ask the breeder to show you proof that the parents don’t have hip dysplasia. If you do discover, later on, that your dog has hip dysplasia, don’t breed.

Old English Sheepdogs can also be prone to cataracts, but usually not until they’re quite old. Surgery can correct the condition.

Another eye disorder is PRA (progressive retinal atrophy). This is a deterioration of the retina, and if your OSE has it, there’s an excellent chance that he will eventually go blind. This doesn’t have to be a death sentence, though – dogs are a lot like humans in that their other senses will work harder to compensate for the loss of vision.

Old English Sheepdogs are also prone to hypothyroidism, which is a condition that occurs when the thyroid gland is underactive. Symptoms can include irregular heats in bitches, mental dullness, obesity and lethargy. The condition is treatable, though. A dog with hypothyroidism can live a long, happy life with daily medication.

One condition that is very common to Old English Sheepdogs is deafness, and that can result in a lot of challenges. You’re going to have to monitor a deaf dog all the time to make sure that he doesn’t wander out into traffic or encounter other situations that could put him in danger. If your OSE has aminor hearing loss, that might not be a big deal. If he’s completely deaf, though, then you’re going to have to ask yourself if you’re up to the challenge. Do you have the patience, and the time, to care for him, or would it be better to re-home him or even euthanize him?

As for exercise, you need to know that your Old English Sheepdog is going to grow very rapidly. In fact, in the first year, he could go from just one pound to more than 60 pounds. This rapid growth can cause problems. You want to feed a quality diet that prevents too-rapid growth. Also, make sure that your OES doesn’t run on hard surfaces in the first few months of his growth. Also, avoid jumping and anything else that can cause animpact on your dog’s growing bones.

Old English Sheepdogs are not typically gluttons, so if you want to free feed, that’s okay. If you prefer to feed on a schedule, though, the recommended amount is two and a half to four and a half cups of good, dry dog food each day, spread out over two meals.

Keep in mind, of course, that the amount of food that your dog will eat will depend on his age, his size, and his individual metabolism. In other words, a dog that just wants to lie on the couch all day isn’t going to need as much food as a dog that’s active.

If you think your dog is getting a bit chunky, stand behind him and hold your hands close to his spine. Then reach down. If you feel ribs, he’s too thin. If you can’t feel ribs without pressing down, then scale back on the food.

The other thing to keep in mind with your OES is that because his coat is so thick, you might not be able to quickly determine whether he’s porking up a bit too much. Be careful not to overfeed.

Old English Sheepdogs are very shaggy dogs and need a lot of grooming. They have a double coat, with an undercoat and an overcoat. Markings can be fawn, brown, grizzle or blue, usually with white markings mixed in.

The OES can be a challenge to groom, so if you’re not prepared to devote at least 3 hours a week to grooming, you might be better off choosing another breed. You’re going to have to brush and comb vigorously to keep shedding to a minimum and to keep your dog comfortable.

The other thing with Old English Sheepdogs is that they tend to drool a lot. That means that you’ll have to wash your dog’s face regularly.

It’s important to note too that some dogs are resistant to grooming, so you’ll have to start the grooming process early with your OES. It’s a lot easier to get a puppy accustomed to grooming than it is to try to wrestle around a fully growndog.

One thing you have to watch out for with your OES is matting – it’s not just unsightly; it can lead to skin problems. When those occur, often the only solution is to shave the dog. Because the OES is so hairy, and because dirt can accumulate so easily in the hair, it’s a good idea to bathe your OES every six weeks or so. You should also check out his ears to make sure that there are no signs of infection, and brush his teeth regularly to ward off tooth decay and gum disease.

Some dogs are highly receptive to having their teeth brushed, but others not so much. If your OES doesn’t respond favorably to teeth cleaning, you should still try to do it. You might not be able to manage it every day, but even a couple of times a week is better than nothing. If you can’t brush at all, then give him rawhide chews on which you can spread doggie toothpaste.

Old English Sheepdogs are typically excellent with children, but there can be exceptions, usually due to bad breeding. It’s crucial, if you’re considering bringing an OES into your household, to deal with a reputable breeder. And of course, as I’m always telling you in my “Breed of the Week” post, it’s not a good idea to leave any dog unattended with children, no matter how kind and gentle the dog.

Old English Sheepdogs are also good with other animals, provided that they’re introduced early on. It’s always best, for example, to introduce a puppy to an adult cat than it is to introduce an adult dog to a kitten.

Old English Sheepdogs make wonderful, loyal, loving pets. If you’re not willing to put up with a lot of grooming, though, consider another breed. It saddens me to know that a number of OSDs end up in shelters simply because people take them and then decide that they’re “too much bother.”

Make sure, if you want an OSD, that you’re in it for the duration, and that you don’t mind having to do quite a bit of grooming.