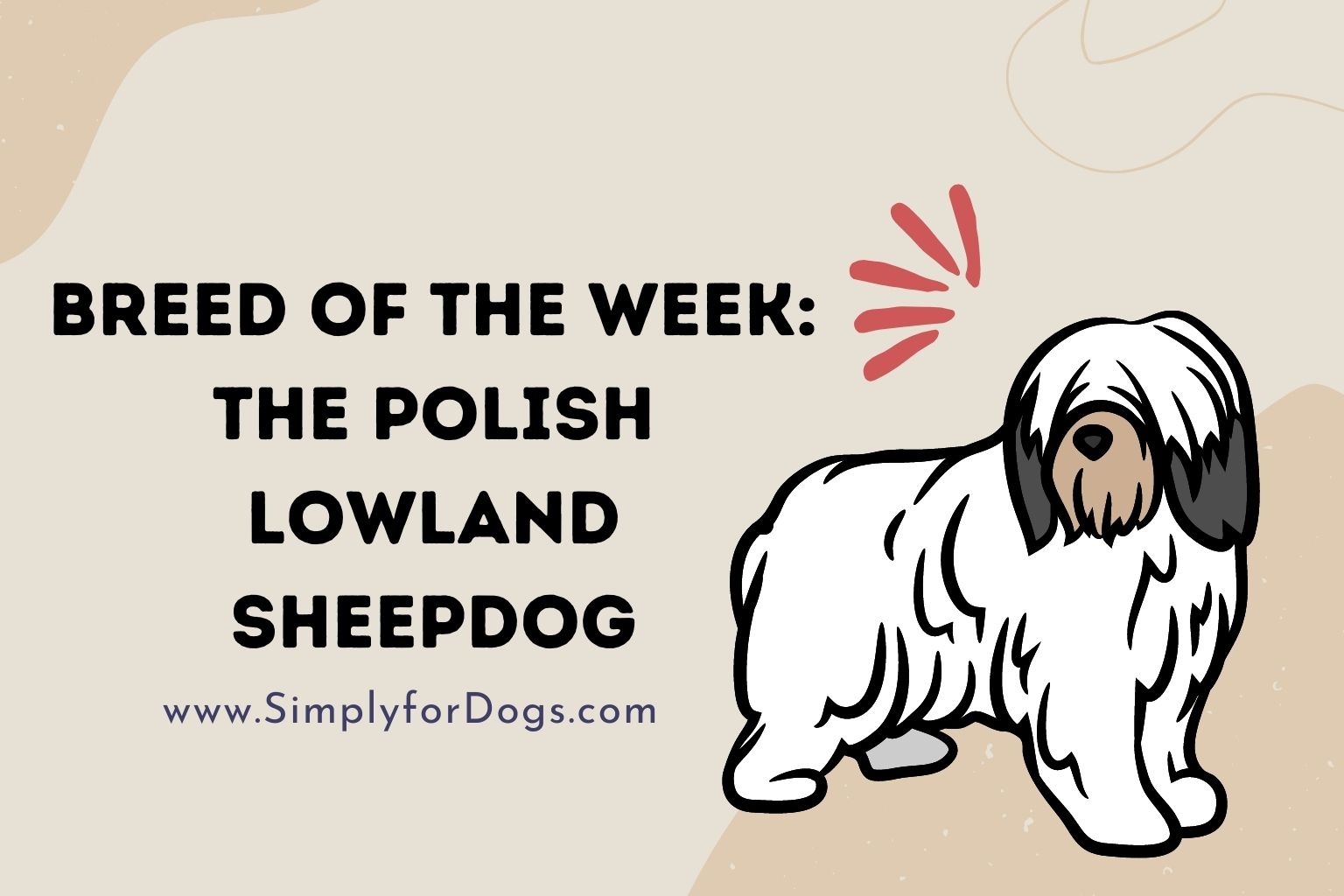 The Polish Lowland Sheepdog was originally bred for guarding and herding, and is still considered to be one of the best working dog breeds. It’s in the dog’s nature to want to protect his flock, which can also include people and other animals. These dogs are very smart, and in addition to their working history, they’re also prized as companion dogs.

The Polish Lowland Sheepdog, as you might expect from the name, originated in Poland. The name is actually a translation from the original Polish name, which is PolskiOwczarekNizinny (pronounced pole-skee-ove-chair-ick-knee-shinny). Usually, it’s abbreviated as PON, so that’s what I’m going to go with for the rest of this post.

The PON belongs to the AKC’s herding dog group, and is a very confident dog that is good with his family, but not all that receptive to strangers until he gets to know them. One thing that makes the breed stand out is a phenomenal memory – this means that this breed is very easy to train, but it also means that if you offend him, he’ll never forget it. For that reason, you should never use aversive training on a PON.

Although PONS need a fair bit of exercise, they’re not what you would call nervous or hyperactive. Dogs of this breed simply have a really good work ethic, and like having a job. If you can’t use your PON for herding or guarding, they you should consider enrolling him in agility training, or at the very least obedience classes, so that he can get the physical and mental stimulation he needs.

PONs also tend to be “one person dogs,” although they will also be happy in a family environment.

If you have kids, your PON will probably try to herd them – again, this is something that’s just in the nature of the dog. If you have small children who don’t understand this behavior, it might be best not to introduce a PON into your household until the kids are older.

The Polish Lowland Sheepdog is one of the older dog breeds, and is probably descended from a Hungarian herding breed, the Puli. There may also be Lhasa Apso, Tibetan Terrier, Tibetan Spaniel and Tibetan Mastiff in the mix. I’m not sure that this is true, but it’s a nice story – it’s believed that the Huns may have spread the breed throughout several different countries as they invaded.

The PON made its way to Scotland in 1514, when Kazimierz Grabski, a Polish merchant, sailed to Scotland hoping to exchange grain for sheep. According to the story, a shepherd in Scotland traded a ram for a pair of PONS, and then, when the deal wasn’t sweet enough, demanded another male. It’s believed that the PONS cross-bred with other dogs in Scotland to produce what we now know as the Bearded Collie.

During the 1800s, there was less sheepherding done in Poland, and with the Nazi invasion, the breed became almost non-existent. Ultimately, though Danuta Hryniewics, a Polish veterinarian, undertook a breeding program, and the PONs that we have today are largely a result of her efforts.

Then, in 1979, Moira Morrison, an American breeder, learned about the background of PONS in her breed of choice, the Bearded Collie. She was intrigued, and brought two PONs in from Poland. Then, she worked to get the breed recognized by the AKC. In 1999, the AKC finally welcomed the PON into the miscellaneous class, and added the breed to their list of recognized dog breeds in 2001.

The PON is still rare in the United States, but in Poland it’s the national dog.

There is little difference between the size of a male and female PON. Dogs of either gender will stand 17-20 inches at the shoulder, and weigh anywhere from 35-55 pounds.

PONS are very intelligent and have an amazing work ethic. These dogs also have incredible memories, which can be a double-edged sword. Not only will the PON remember everything you’ve taught him, he’ll also remember every time you let him get away with a bad habit. This breed needs a leader that is strong, but kind. If you let him get away with much, he’ll soon decide that he should be the boss of the household.

A PON needs a job. This is a working breed, and PONs want to be active both physically and mentally. In other words, your PON needs a challenge. If you don’t provide him with one, he’ll probably become “barky” and destructive.

Don’t expect your PON to make friends with just anyone – these dogs are usually aloof with strangers. Once a PON discovers that you’re okay with someone in your group, though, he’ll typically come around.

As is the case with any breed, it’s important to socialize your PON puppy early on. Make sure that he gets to meet many different people and experience lots of different things.

PONs are typically very healthy dogs, and not prone to all that many diseases and conditions. One thing you do have to watch out for, though, is hip dysplasia. This isn’t something that’s unique to the PON – any dog, of any age or breed, can develop hip dysplasia. It’s a condition that occurs when the hip and thigh bones don’t fit properly.

Sometimes, you can have a dog with hip dysplasia that will display no symptoms whatsoever. In other cases, the dog could become lame, usually in the hind legs.

You’ll never be able to identify hip dysplasia in a PON puppy, or for that matter in any other breed, simply because it doesn’t usually show up until the dog is around two years old. The condition is hereditary, though, so the best way of ruling out the possibility of hip dysplasia in your PON puppy is to ask your breeder to show clearances proving that the adult dogs in the kennel are free of the condition. Keep in mind, too, that the condition might not manifest until the dog is a good deal older – sometimes, hip dysplasia can occur as a complication of arthritis that is due to the natural aging process.

Another condition that can occur in the Polish Lowland Sheepdog is PRA, or progressive retinal atrophy. Essentially, it’s an eye disease that begins with the dog losing its night vision. As it progresses, the dog may have trouble seeing in the daytime as well.

PRA can sometimes lead to blindness, but it doesn’t have to be a death sentence – think of all the elderly people you know whose eyesight has deteriorated over the years. You don’t put them to sleep, do you? Usually, a dog’s other senses will work to offset the effects of PRA, so if your dog does develop this condition, just keep on loving him and don’t move the furniture around!

Generally, a PON will prefer a cool climate, but the breed is adaptable, so if your heart is telling you “I want a PON, but it’s pretty warm where I live,” don’t worry. Just make sure that if he’s out in the yard he has access to shade and cool water.

Of course, it should go without saying that you shouldn’t leave any dog outdoors all the time. Dogs are happiest when they’re with other members of their family.

As to feeding, if you want to, there’s no reason why you can’t free feed your PON. I’ve always free fed my dogs, sometimes in direct opposition to what my veterinarian wanted me to do. I’ve found, though, that free feeding leads to less conflict over food, and also to a lower likelihood of obesity.

If you do want to feed on a schedule, though, give your PON anywhere from a cup and a half to two and a half cups of good dog food each day, spread out over two meals. Keep in mind, too, that a very active PON will need considerably more food than one that just prefers to lie around the house all day. And vice versa.

I should point out, though, that some PONs can be gluttons – so if you think that this is the case with your dog, it might be better to feed on a schedule. Each PON is different – some might see food as the best thing in the whole world, while others might just take what they need.

If you think your PON is getting too much food, or too little, do a “touch test.” Stand behind your PON, and run your hands down his spine and ribs. Do you feel bone? If you do, increase the food that you’re offering. If you have to press down hard to feel bone, probably your dog is “chunking up” more than he should, and you should cut back on the food and offer more exercise.

A PON is a shaggy dog, with a thick, long topcoat and an undercoat. As to color, the most common combinations are black with gray and white, or gray with chocolate and white. Sometimes, though, a PON might be all one color – white or black. Black and tan is another common combination.

As to grooming, don’t pimp the PON! Even though this dog has a long coat, he really doesn’t need a whole lot of grooming. A good combing and brushing a couple of times a week is a good idea, but you also won’t want to bathe all that much – just when he’s really dirty.

If your PON isn’t all that active (i.e. not walking on hard surfaces) it would be a good idea to clip his nails a couple of times a month. Also, check out his ears to see if there’s any redness, odor or dirt and wipe them out using a vet-approved ear cleaner.

You won’t have to groom your PON all that much, but if you can’t be bothered grooming at all, then it would probably be best to consider another breed.

The other thing that you should do regularly is brush your PON’s teeth. This is true of any breed of dog, for that matter. You brush your dog’s teeth for the same reason you brush your own – to prevent cavities and gum disease. It’s usually best if you can brush once a day, but realistically, some dogs aren’t all that happy about having their teeth brushed, so if it looks like it’s an issue, try for two or three times a week. If you can’t brush at all, then give your dog a rawhide chew on which you’ve spread a dog-friendly toothpaste. It’s not a perfect solution, but it’s definitely better than doing nothing at all.

PONs are known for being faithful and devoted, and this makes a PON an outstanding family dog. His family is, quite simply, his flock, and he’ll look after his flock. The same will usually go for other animals in the household, but it’s usually best to introduce a puppy to an adult animal regardless of breed or species.

You’ll usually be okay with other animals as well – PONs aren’t typically aggressive, although I would, of course, recommend supervising any dog with other animals, at least until they’re used to one another. And as I’m always saying, you shouldn’t leave a dog of any age, breed or species alone with a young child.

The Polish Lowland Sheepdog is a highly intelligent dog, very loyal, and good with kids and other animals. He might need a bit of time to get used to strangers, though. Once he sees people as “friends,”they’ll be friends for life.