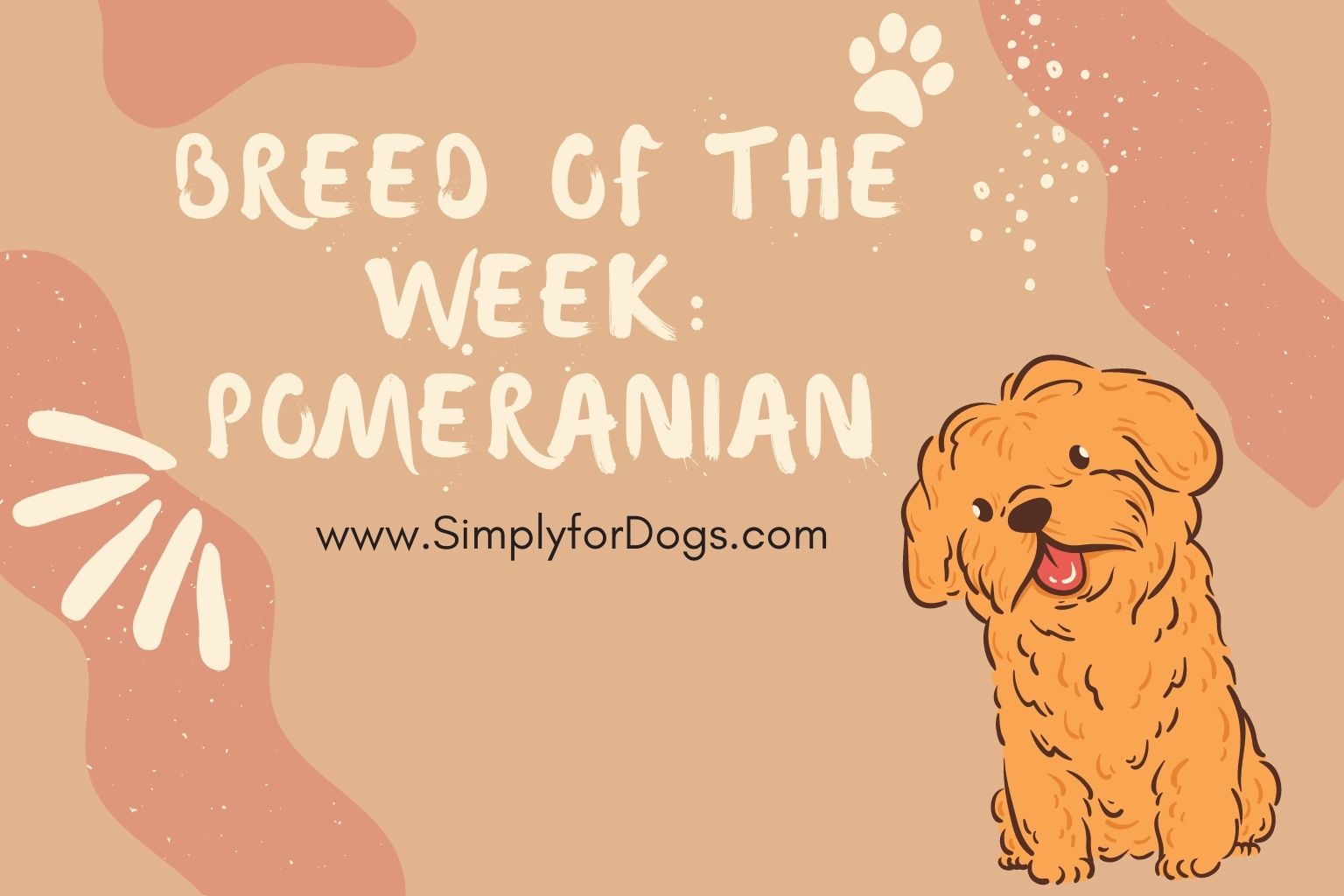 We’ve discussed a few larger breeds lately in the Breed of the Week column, so I though it was time to highlight a small dog. While my preference is for larger dogs myself, there’s no denying the charm of certain small dogs. They arecute, cuddly, and often just as big-hearted as a large breed. Many small breeds can even make fantastic guard dogs, especially the 16 breeds from an older post. Many of those dogs have already made their way into the Breed of the Week spotlight, but there’s one fan favorite we haven’t mentioned yet.

Say hello to the Pomeranian, a designer dog that is wildly popular among just about everyone from celebrities to elderly retirees. These dogs may look more like fluff balls with legs, but believe me when I say that Pomeranians have no idea how small and adorable they are. These dogs are full of spirit and are more than willing to protect their family – even if that protection doesn’t do much more than annoy anyone suspicious.

[su_table]Products for Pomeranians On Amazon

Many small breeds, like the Chihuahua for example, don’t have very clearly defined breeding histories. Their stories include a hodgepodge of folk lore and educated guesses. But the Pomeranian’s history is a little bit more documented. For example, we know that these dogs come from an area in Northern Europe called Pomerania, on the coast of the Baltic Sea. Most canine historians agree that today’s Pomeranian originated from larger breeds of the Spitz dog breed family. In fact, the earliest Pomeranians were about 30 pounds or so – quite different from the tiny dogs we know today, which average about seven pounds.

While Pomeranians were being bred before this, we also know that they became more popular in the Victorian era in England, due to Queen Victoria bringing back a Pomeranian from a vacation to Italy once. In the early 1910s, Pomeranians were shown in specialty events in America, and that solidified the breed’s place in our hearts.These dogs are now in the top 20 of all-time most popular breeds as ranked by the AKC.

The first thing that most people will notice about a Pomeranian is all that hair! These dogs define “fluffy”, with a very dense undercoat supporting a long and thick outer coat. When trimmed in the traditional style of this breed, your Pomeranian may look like a stuffed toy. But beyond the coat, there are other characteristics that these dogs are known for. Being very compact is one of those. Pomeranians average about seven pounds when fully grown, and they have short, stumpy legs that keep them low to the ground. Adults don’t tend to get any bigger than 12 inches, though the average is closer to eight inches.

Pomeranians are also known for having very bright and curious eyes,as well as big bushy tails that curl up and over their backs. They have very animated walks, often moving around in more of a skipping, hopping, buoyant gait than a simple walk. Pomeranians can come in every color imaginable, as well as many combinations such as tricolor and spotted; however, they are known especially for having red or orange coats.

Relatively speaking compared to the history of the breed, this trademark ginger coat is a new characteristic. And the breed has changed in other ways too over the years. Originally, Pomeranians had foxlike faces with sharper, more cunning features. Today, their noses are broader, their eyes are bright and open, and their muzzles are very dainty – all adding to the image of a walking, barking stuffed toy.

If there is one word that sums up the Pomeranian personality, it’s “spunky”. While they don’t necessarily require a ton of exercise and activity, they are very curious and alert dogs. They tend to be busybodies, always trotting around looking into what’s going on, rather than couch potatoes – though they do enjoy ample snuggle time with their family.

Just because they don’t require a lot of exercise doesn’t mean that a Pomeranian wouldn’t be very happy with lots of walks and puppy play dates. Their natures make them very suitable for someone who wants the energy level of a larger dog, but who must have a smaller dog in their home. Pomeranians are very smart and trainable. They frequently are showcased in sporting events like competitive obedience events, obstacle courses, and tracking competitions.

However, Pomeranians have been known to take “spunky” a little too far. If a Pomeranian isn’t frequently socialized from an early age, they can become protective and suspicious of anyone who doesn’t live in their household. In fact, even within a household, Pomeranians often choose one or two people to claim, and can be feisty towards other family members in the same house. It takes patience and firm training to ensure that a Pomeranian is not only taught to be friendly, but also that he maintains that friendliness.

Pomeranians tend to be barkers, and this is one area that makes them ideal guard dogs for single people[easyazon_image align=”right” cart=”n” cloak=”y” height=”84″ identifier=”B000FMDIL6″ locale=”US” localize=”y” nw=”y” src=”https://SimplyForDogs.com/public_html/wp-content/uploads/2017/09/41KPa7UwLjL.SL110.jpg” tag=”natur0da-20″ width=”110″ type=”image” link_id=”2837″] or elderly people living alone. Just because they aren’t big enough to do much damage, doesn’t mean they won’t be a great alarm system. The only problem here is that this fact could make them unsuitable for apartment living. Even with good training, Pomeranians aren’t known for giving up this habit easily. If you want to get a Pomeranian to learn to control the barking, the best method that I have found is clicker training from the very first day. I like the [easyazon_link identifier=”B000FMDIL6″ locale=”US” nw=”y” tag=”natur0da-20″ cart=”n” cloak=”y” localize=”y” popups=”n” type=”link” link_id=”2838″]StarMark clicker[/easyazon_link] that I’ve recommended many times on this blog; it’s affordable, convenient, and well-made, without any unnecessary frills.

Despite those potentially negative traits, overall the Pomeranian personality is outgoing, curious, and fun. They don’t tend to be very fearful or timid; in fact, don’t be surprised if your Pomeranian becomes the new boss of your pack should you have other pets. They are loving and affectionate with their family, and while busy, they aren’t so active that they bounce off the walls. This makes them ideal pets for someone who wants a good mix of fun without the destruction.

How Much Do Pomeranians Cost? (Video)
15 Most Posh Dog Breeds
16 Best Small Guard Dogs for Apartments

While tiny breeds can be cute and perfect for small homes, they do tend to suffer from a variety of health problems that larger breeds don’t face. Many Pomeranians are long-lived and generally healthy, living for 15 years or longer; but there are certain concerns that you need to watch for as an owner of this breed:

A general rule of thumb is that the smaller the puppy is, the more health concerns you’ll need to be worried about. An extremely small teacup version will need more frequent vet visits than a “standard” seven-pound Pomeranian. Be sure that if you are adopting a puppy over the age of four months, that they have had an LCP disease screening, and you may also want to check for thyroid issues while you are at it.

Despite having such a dense and prominent coat, Pomeranians are easy enough to groom. They are small and used to being lap dogs, so you should have no trouble getting your Pomeranian to sit still and enjoy being brushed. Brushing does need to happen several times a week, or their hair will tangle or mat up. A [easyazon_link identifier=”B00JJHBHM0″ locale=”US” nw=”y” tag=”natur0da-20″ cart=”n” cloak=”y” localize=”y” popups=”n” type=”link” link_id=”2842″]slicker brush[/easyazon_link], particularly a medium-length version, will work best to keep their coat in good condition without tugging on tangles.

Pomeranians definitely do shed, but the shedding can be controlled with regular brushing. And they are so small that they won’t leave too much hair behind even if they do shed. Bathing only needs to happen twice a month or so, as Pomeranians don’t typically get filthy – but because they are so close to the ground, they will need at least that. Use a gentle shampoo if you bathe your dog more than twice a month, because their skin can dry out from a lot of detergent.[easyazon_image align=”right” cart=”n” cloak=”y” height=”110″ identifier=”B001P3PR54″ locale=”US” localize=”y” nw=”y” src=”https://SimplyForDogs.com/public_html/wp-content/uploads/2017/09/51tdBc72BX0L.SL110.jpg” tag=”natur0da-20″ width=”79″ type=”image” link_id=”2843″]

Just like all dogs, Pomeranians will need their toenails trimmed regularly, and their dental care should never be neglected. This breed can develop dental issues very quickly, so particular attention should be paid to their teeth. Brush frequently and feed with crunchy food rather than soft, wet foods, for the best oral health. If you do give your dog treats, consider giving dental chews like the [easyazon_link identifier=”B001P3PR54″ locale=”US” nw=”y” tag=”natur0da-20″ cart=”n” cloak=”y” localize=”y” popups=”n” type=”link” link_id=”2844″]Virbac C.E.T. chews[/easyazon_link] for small dogs.

Even very well trained Pomeranians need to be supervised around children. Pomeranians are known for being less than fond of children, especially kids that are rambunctious and may poke or prod at what they see as a tiny walking toy. Pomeranians are proud dogs that think of themselves as big protectors, and they don’t usually take well to being treated as “small”. If your children are respectful of the dog’s space and let the Pomeranian come to them, they’ll likely get along much better. It’s never a good idea to let strange children, such as neighbor kids walking down the street, to approach your Pomeranian unless you are certain they will respect your commands.

With other pets, Pomeranians can go either way. Some Pomeranians will simply assume the alpha role and be perfectly happy leading the pack; others won’t be fond of other pets, and the competition for food and affection may be hard to handle. If you have existing pets, it’s a good idea to introduce a Pomeranian first before committing to adopting one. Be sure to watch how Pomeranian puppies interact with each other when adopting from a young age.

[su_table]Products for Pomeranians On Amazon

Pomeranians are spunky, cute little dogs with big attitudes that would make great pets for the right person. If you want a dog that is fun and smart, but that won’t destroy your house, and you’re willing to put in the time to train out the suspicious nature that many Pomeranians share, you’d probably find this dog to be a great match for your lifestyle.

How Much Do Pomeranians Cost? (Video)
15 Most Posh Dog Breeds
16 Best Small Guard Dogs for Apartments