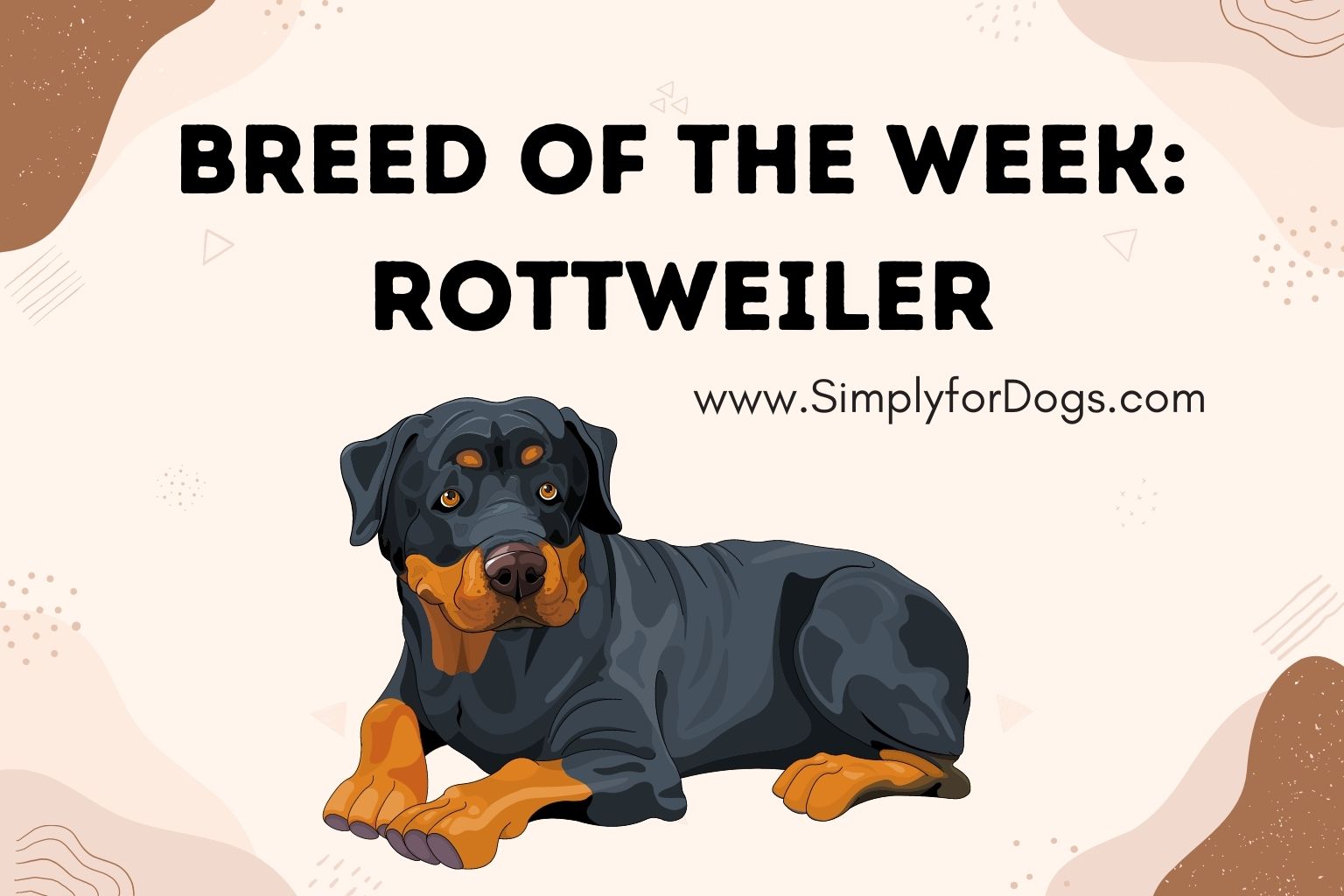 All right Neila, just shut up, stop bothering me, fine, I’ll do it!

Regular readers have heard me talk over and over about my friend Neila, who breeds Rottwielers, and she has been nagging me to distraction, saying, “Ash, when are you going to make the Rottie the breed of the week?”

I haven’t really been holding out on Neila – it’s just that I didn’t want you guys, given that I talk about Neila and her dogs all the time, to think that I was favoring one breed over another. So please believe me when I say that I am not, and understand that I will never be able to shut Neila up if I don’t do a Rottweiler “Breed of the Week” post. Besides, I like Rotts, and this is MY blog, and I can do what I want. If you see a bias coming through (and you probably will), again, remember that this is MY blog. Mine. So, without further ado, the noble Rottie!

Rottweilers originated as a breed in Germany. Many people will tell you that Rotts were bred for fighting or guarding, but that is actually not true – this noble breed was created for herding cattle and pulling carts.

The Rottweiler, despite his current reputation, is a gentle dog. Just look into his chocolate-brown eyes, and see them looking back at you, and you will know that he is alert, intelligent, fearless, and yes, friendly. Sometimes Rotts are a bit aloof with strangers, and they might want to take a “wait and see” approach, but he will not typically be confrontational. He will, though, have a natural predisposition toward protecting his family and friends, so you would be well advised not to mess with anyone that a Rottweiler loves.

What this means is that a Rott is not a dog for just anyone. Rotts can be playful and gentle, but they need a firm hand when it comes to training. And in addition to properly training and socializing your Rott, you will have to accept that you will encounter people who have no idea what Rotts are all about, and may even want to see your dog banned. I’ve talked about BSL (Breed Specific Legislation) In Breed Stereotyping – Why It’s Harmful and Why We Need to Fight It, and believe me, when BSL advocates come for dogs, the Rotts are probably going to be number one or two on the list. So Rottweiler owners have to be even more vigilant than owners of other breeds when it comes to making sure that their dogs are well trained and well socialized.

16 Best Small Guard Dogs for Apartments
The Top Five Dogs for Personal Protection
Breed Stereotyping – Why It’s Harmful, and Why We Need to Fight It

Your Dog Will Be Judged

I know that I started off just taking about the breed, but I often tend to type as fast as I think, and once again I’m going to point out that this is MY blog. So I’ll digress if I want to, and I’ll tell you that even if your Rottie is superbly trained and socialized, people will still judge him. Insurance companies might also deny you coverage, or make you pay more if you own a Rott – in spite of the incontrovertible proof that you can find by pulling up any number of statistics, anywhere, that prove that Rotts are no more dangerous than any other breed. It is prejudice, plain and simple, but you will probably have a great deal of difficulty fighting it.

No. Sometimes Rottweilers can be a bit rough, but it is because of their size, not their nature. You may have heard that Rotts are not good with kids. In fact, they are very good with children. Usually a Rottweiler will bond to anyone in the family and consider them to be people who must be protected. Because the Rott is a very big dog, though, he can sometimes knock a toddler over. No malice is involved, and usually the kid will simply pick himself up and go about his business. Rottweilers that are raised with kids usually get along just fine with them.

Adult Rotties sometimes do not do well with other animals, especially if they are of the same sex. Neutered animals typically coexist better. If you plan on introducing two Rotts of the same sex into you household, you will probably have to be vigilant – they may fight. In fact, you would probably be better off to have one or both neutered.

Rottweilers require firmness and consistency. You can never back down, since a Rott will almost always take advantage if allowed to. 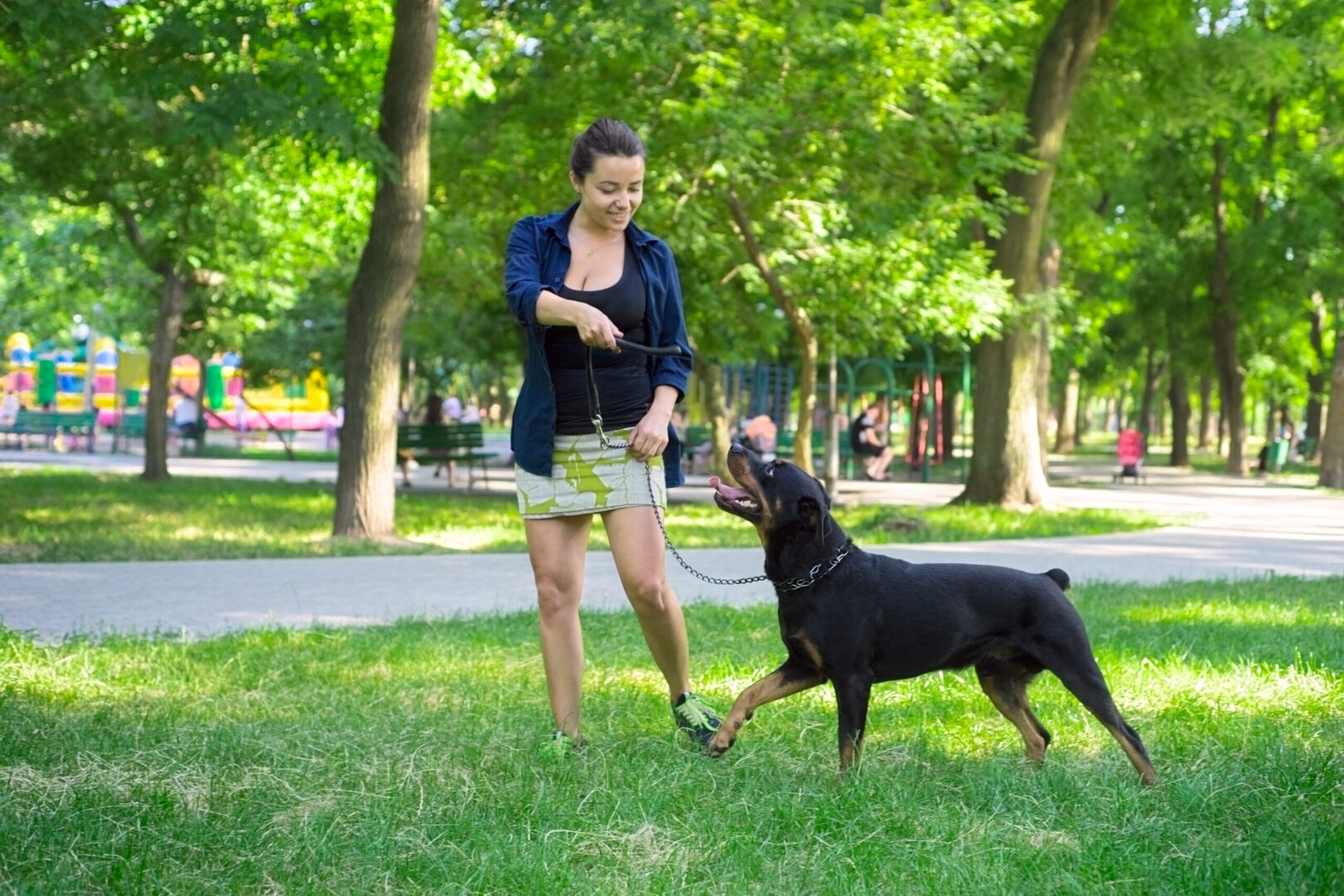 I always free feed my dogs, and Neila does the same with her Rotts. We do this flying in the face of veterinary advice, because we have seen how it works. If you want to feed your Rottie on a schedule, though, give him or her no more than they will eat in about ten minutes – usually about four cups per feeding (twice a day) will do the trick. Rotts can be pigs, and will overeat and gain weight if not monitored. 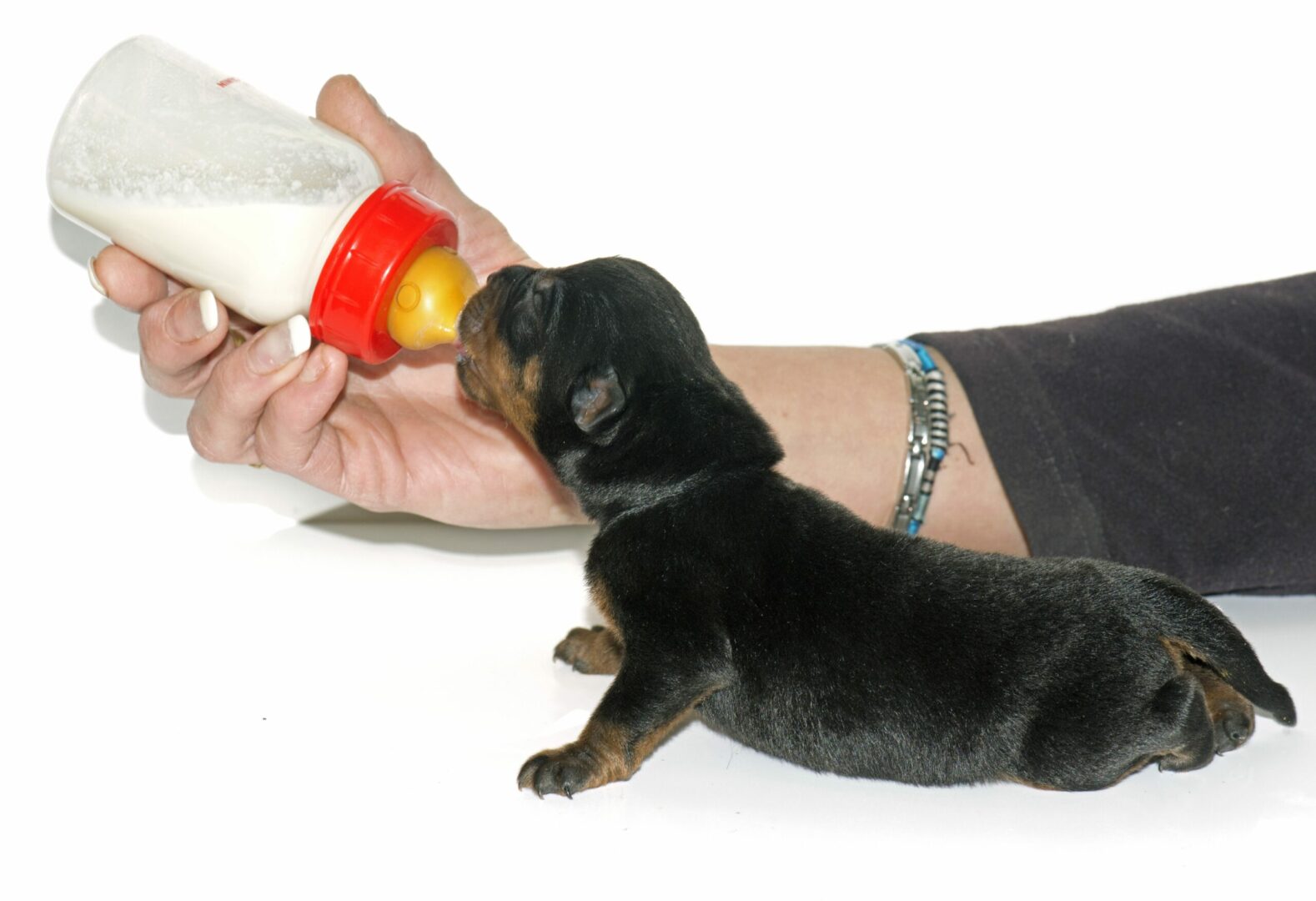 Male Rottweilers typically measure 24-27 inches at the shoulder and weigh anywhere from 95-130 pounds. Females are 22-25 inches at the shoulder and weigh 85-115 pounds. The absolute top weight for a male Rott is 140 pounds. You may have heard people tell you “My Rottweiler weighs 160 pounds,” but don’t believe it. Either the dog is morbidly obese, or there is something other than Rottie in there.

Rottweilers are typically courageous, calm and confident, but may be aloof. Some Rotts are very sociable and will make friends with just about anyone, but usually the Rott likes to “wait and see” before he decides to be your friend. With family, though, he will be very affectionate, sometimes to the point where separation anxiety can be an issue if he is left alone. Females are usually more controllable and docile, whereas males can be stubborn and more difficult to train. With both genders, though, a heavy hand is a bad idea. Rotts are very sensitive – in fact, some animal behaviorists say that Rottsare “10% dogs,” meaning that they are 10% more loving, 10% more courageous, and 10% more prone to having their feelings hurt than other dogs.

My friend, Neila, tells me that the key to training a Rottwieler is earning his respect. You can start out with great temperament, but it’s only the beginning. You need to form a relationship based on mutual understanding. I can’t find much to argue with when it comes to that.

Picking out a Rottweiler puppy is probably not much different than choosing one from any other breed. You want to select a puppy that has a good temperament and interacts well with the rest of his litter. You don’t want the one that is hanging back, or bullying his littermates. When you are shopping for a Rottweiler puppy, you should also view both parents if possible, or at least take a look at the bitch. If the stud is off-site, you might not be able to view him, but if you can’t see the bitch, find another breeder. If the puppies aren’t with the bitch, then you can bet that they are not well socialized.

Rottweilers are prone to health problems, and I’m not going to tell you any different. If you choose a Rottweiler, then the price that you will almost inevitably pay for your love of the breed is that you will lose your dog to some form of cancer around the age of 9 years. I can’t even begin to tell you how many Rottweilers Neila has lost to liver cancer and bone cancer. But she keeps on adopting and breeding, because she loves Rotts. If you feel the same way, though, you have to be prepared for the inevitable. 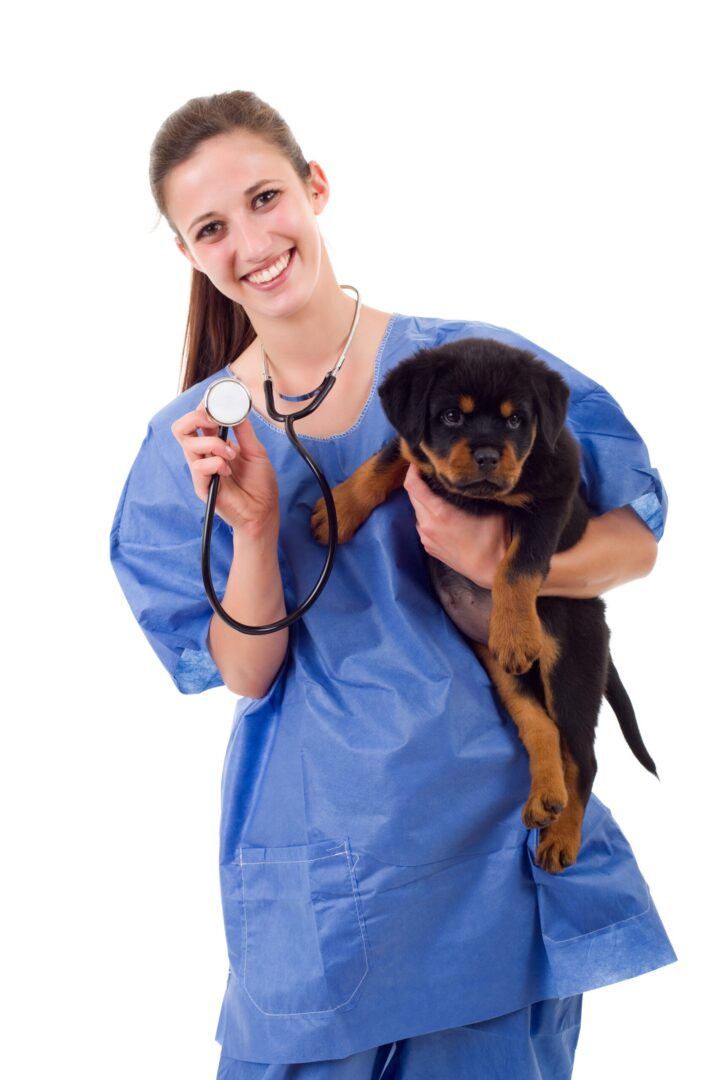 Rotts are also prone to hip dysplasia and Von Willebrand’s disease, as well as hypothyroidism. Many breeders will provide you with certification to the effect that the dog has been screened for such disorders, but even so, this does not mean that they will never happen.

Some people think that they can adopt a dog, put it out in the back yard, feed it and water it, and it’s all good. This is not the case with any dog, and even less so with a Rottweiler. Rottweilers are very much family dogs, and if they are left alone, they can become destructive and even aggressive toward other people and dogs that might come on to your property. Kept inside, the Rott will most likely be happy to lie on your couch or at your feet, and will display no destructive tendencies whatsoever.

I really have to wonder, too why anyone would want a dog if what they are going to do is chain it outside. It’s abuse, plain and simple, so don’t do it!

Believe it or not, Neila never grooms her dogs – she just pets them, and their coats always look and feel great. If you’re not prone to want to pet your dogs constantly though (and why not?) you can brush your Rott once a week to dislodge dead hair.

As to the toenails (and that is often an issue for people who have dogs of any breed), get your dog used to having his feet handled early on. If you’re uncomfortable with clipping nails, you can take your dog to a groomer who will show you how to do it the right way.

Rottweilers love kids! But because they are so big, you should supervise them around the little ones. As to other animals, it is usually best to introduce a Rottweiler puppy to an adult dog or cat rather than the other way around. Most of the time, though, you won’t have any issues.

16 Best Small Guard Dogs for Apartments
The Top Five Dogs for Personal Protection
Breed Stereotyping – Why It’s Harmful, and Why We Need to Fight It

Rottweilers are usually gentle giants – loving and cooperative, great with kids, and good with other animals. They have a bad reputation, but that is mostly because people just don’t understand these wonderful dogs. Rotts aren’t perfect – no dog is. But in the right hands, the Rottweiler can be the ultimate family dog; a loyal protector, loving friend and beloved companion.