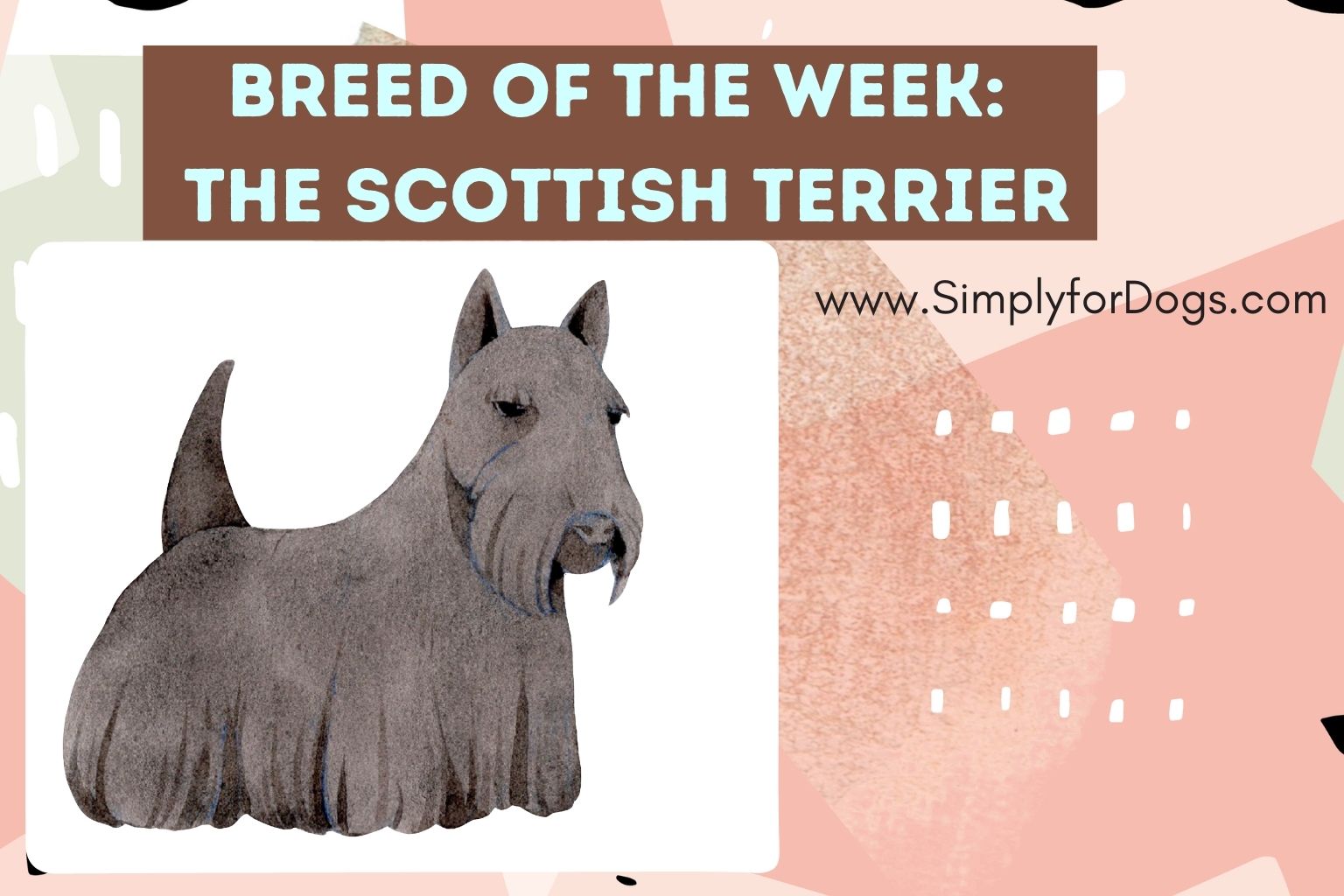 Scottish Terriers are such appealing dogs; they kind of remind me of mustachioed little old men, and looking at one always brings a smile to my face.

Don’t think, though, that this isn’t a dog to be taken seriously! The Scottish Terrier is smart, independent, and has a bark that’s much bigger than his size, making him a passable watchdog for a small breed. Putting it this way, burglars coming to your house are more likely to think, based on the bark, that you’re harboring a Rottweiler than a little guy.

The Scottish Terrier is also great for keeping rodents out of your yard; he’s a dog on a mission!

In short, there’s much to recommend the Scottish Terrier. Let’s take a closer look.

The Scottish Terrier (or Scottie) is likely quite an old breed, but his history isn’t all that well documented. Probably the best-known and most reliable source for the breed’s history is Pliny the Elder, who wrote in 55 BC about dogs that the Romans found in Britain that would “follow their quarry to the ground.”

The Scottie also probably descends from the Old Scotch Terrier, which is the foundation for all the terrier breeds we know today. This breed is now extinct but was very similar to today’s Scottie in that it was short and had long hair and half-prick ears.

Now, if we move ahead to 1436, there are reports of dogs that are very similar to today’s Scotties. And in the 17th century, there are reports of King James I of England making gifts of small, Scottie-like dogs to the King of France. Apparently, the French king was so fond of these dogs that he began breeding them, and that’s what has led to the modern Scottish Terrier.

As of the 1800s, the breed found its way back to Scotland, and ended up being grouped with a number of other terriers. By 1870, though, various breeds came into their own, and were divided into Skye Terriers, Cairn Terriers, West Highland White Terriers, and the Scottish Terrier.

The Scottish Terrier is small and compact, and usually not much taller than 10 inches. Males weigh between 19-22 pounds, and females 18-21 pounds.

Breed of the Week: West Highland Terrier (Video)
A Look at Chihuahua Terrier Mixes
15 Fattest Dog Breeds – Why Do They Get So Big?

Scottish Terriers can be a bit aloof; this is not the kind of dog who is going to meet you on the street and immediately go, “Oh, hi, new best friend!” Oohing and ahhing and cuddling are just not his thing. In fact, he’s probably going to be a bit reluctant to accept anyone outside his immediate circle. He’s a family dog, pure and simple, and this makes him very sensitive to how you treat him. Anger will hurt his feelings, and praise will delight him.

Because of this, it’s even more critical with Scotties than it is with other breeds to start the socialization early. Invite family and friends over frequently. You might even want to think about enrolling him in doggie kindergarten so that he can work on overcoming his instinctive distrust of strangers (and their dogs).

Scotties are pretty healthy. Like all dogs, though, there are some diseases and disorders that you need to watch out for. Your Scottie could very well live his entire life and never fall victim to any of these conditions, so don’t obsess over them; just keep them in mind.

This is actually one of the more common disorders when it comes to Scotties. It’s not harmful, though; it just looks kind of scary. It occurs when the dog is overly excited or stressed, and it manifests as over-flexing in the rear legs, sideways outward movement in the front legs, and sometimes an arched spine. Sometimes, the dog will have trouble running or walking. It’s not a progressive disorder, though, and your dog can live a perfectly good life with Scottie Cramp. As I’ve suggested, it looks a lot worse than it really is.

This disorder is usually more common in large breeds but can affect Scotties, as well. It’s an inherited condition that is very much like hemophilia in humans in that it affects blood clotting. If your Scottie sustains an injury that causes bleeding, and the bleeding seems to go on a lot longer than it should, or if he bleeds too much following surgery, you should suspect Von Wellebrand’s disease.

Perhaps you have heard it said that certain breeds, like Rottweilers and Dobermans, have skulls that don’t grow quickly enough to accommodate their brains, and this results in mental illness and viciousness.

This is an absolute myth; it doesn’t happen. Viciousness is caused by treatment the humans inflict on their dogs, not because of any problems with skull vs. brain growth.

I think, though, that this myth might have its origin in something that is actually very much the opposite: craniomandibular osteopathy, which is an abnormal enlargement of the skull bones. Usually, the symptoms begin when the puppy is four to eight months old.  His jaw will swell, and he’ll drool. He’ll also develop periodic fevers. There is no treatment for this disorder, but it can be eased with anti-inflammatories and pain medication. In severe cases, your dog might need a feeding tube.

Although there is no cure for this disorder, the symptoms often ease as the dog ages. In serious cases, though, surgery might be needed.

Patellar luxation affects a lot of small dogs. The patella is your dog’s kneecap, and the luxation (or dislocation) occurs when the kneecap does not fit properly into the hind leg. It slips out of place, and can cause crippling pain. Fortunately, patellar luxation can be corrected surgically.

Scotties are active dogs, and if they’re not exercised properly, they can be destructive. They’re not much for running but do appreciate vigorous walks. It’s a good idea to keep your Scottie leashed on walks, though, because if he sees something that he wants to chase, he won’t think twice before running into traffic.

One thing that is absolutely not good, exercise-wise, for your Scottie is swimming. His body simply isn’t made for it. In fact, many Scottie rescue groups will not give dogs to people who have backyard pools. This is because the Scottie’s heavy body and short legs mean that he’ll swim like the proverbial rock, right down to the bottom of the pool, and never make his way back up.

As to potty training, the Scottie is no different than most other dogs; a crate can make the job a lot easier. Don’t leave your Scottie in a crate for long periods of time, though; Scotties are “people dogs” and can become very depressed if left alone for hours.

The average Scottie will need a cup to a cup-and-a-half of good dry dog food per day, spread over two meals. Of course, if your Scottie is very active, he might need more. If he’s a bit of a “lazing around the house” type of dog, he’ll need less.

I always use to think that Scotties were invariably black. Certainly, this is the way that they are usually depicted in paintings. They can, though, also be wheaten, steel, grey or even brindle.

Scotties are double-coated dogs, with a wiry, hard topcoat and a dense, soft undercoat. Scotties don’t shed much, since their hair is constantly growing. The breed can be very prone to dry skin, though, so you should bathe your Scottie only when it’s really needed.

This doesn’t mean, though, that Scotties don’t have to be groomed. You should brush him at least once a week to dislodge loose hair (more often if you’re planning to show) and clip him every couple of months if you’re not showing.

Now, that might sound a bit counter-intuitive. Why wouldn’t you clip if you were going to show? It’s because Scotties that are clipped regularly end up with a duller color in the coat, and also softer hair, which is not the standard for the breed. It can be difficult, post-clipping, to get the hair back into the desirable condition for showing.

The other thing with Scotties is that they don’t tolerate fleas well. In fact, they’ve been known to chew themselves to the point of harm if troubled by fleas. Using a flea comb periodically is a good idea.

Nail trimming is every bit as important for Scotties as for any other dog, so if you notice that you’re hearing “tickticktick” when your dog walks over a hard surface, haul out the clippers and take those nails back a bit. Remember, though, some dogs really don’t like having their feet handled, so start doing this early, when he’s just a puppy.

Regular tooth brushing is also important. You don’t want to have plaque and tartar build up on your Scottie’s teeth any more than you’d want it on your own teeth. Try to brush daily. If that doesn’t seem practical, at least try for a couple of times a week.

If you begin grooming when your Scottie is young, and make it a good experience with lots of praise and treats, you’ll have no trouble with him as he gets older.

Scotties are known for being one of the best breeds when it comes to getting along with children. Keep in mind, though, that he’s still a dog, and no dog is going to react happily if your rug rats pull his ears or his tail. A lot of really loud, sustained noise on the part of toddlers could also provoke much the same reaction in your Scottie as it would in you; the difference is he won’t have the impulse control that I hope you’d have.

As to other animals, most of the time, the Scottie is a lover, not a fighter. He’s no different from any other breed, though, in that he might get into fights with reproductively intact dogs of the same sex. If that happens, he won’t back down, even if the other dog is much bigger and stronger. I guess I probably don’t have to tell you that in a Scottie/Doberman smack down, there’s going to be no good outcome for the Scottie.

So, if you’re going to have a Scottie in a household with other dogs, it’s best that they be neutered if they’re of the same sex.

As to cats, Scotties will usually do okay with them if they’re raised together from the start. Other small animals, like hamsters, guinea pigs or small rabbits, though – well, no. Just don’t do it. The Scottie is a hunter born and bred, and he’s just going to see these little guys as prey. Don’t blame him for that; it’s just in his nature, so don’t set him up to fail by expecting him to get along with smaller animals.

Breed of the Week: West Highland Terrier (Video)
A Look at Chihuahua Terrier Mixes
15 Fattest Dog Breeds – Why Do They Get So Big?

Scottish Terriers are such lovely little creatures – strong and independent, and yet very loving. They’re incredibly loyal to their family members, but a bit unwelcoming around strangers, at least until they get to know them; then that stranger becomes a friend.

Scotties are good with kids, usually good with other dogs, and not a problem around cats. Just keep the hamsters caged.