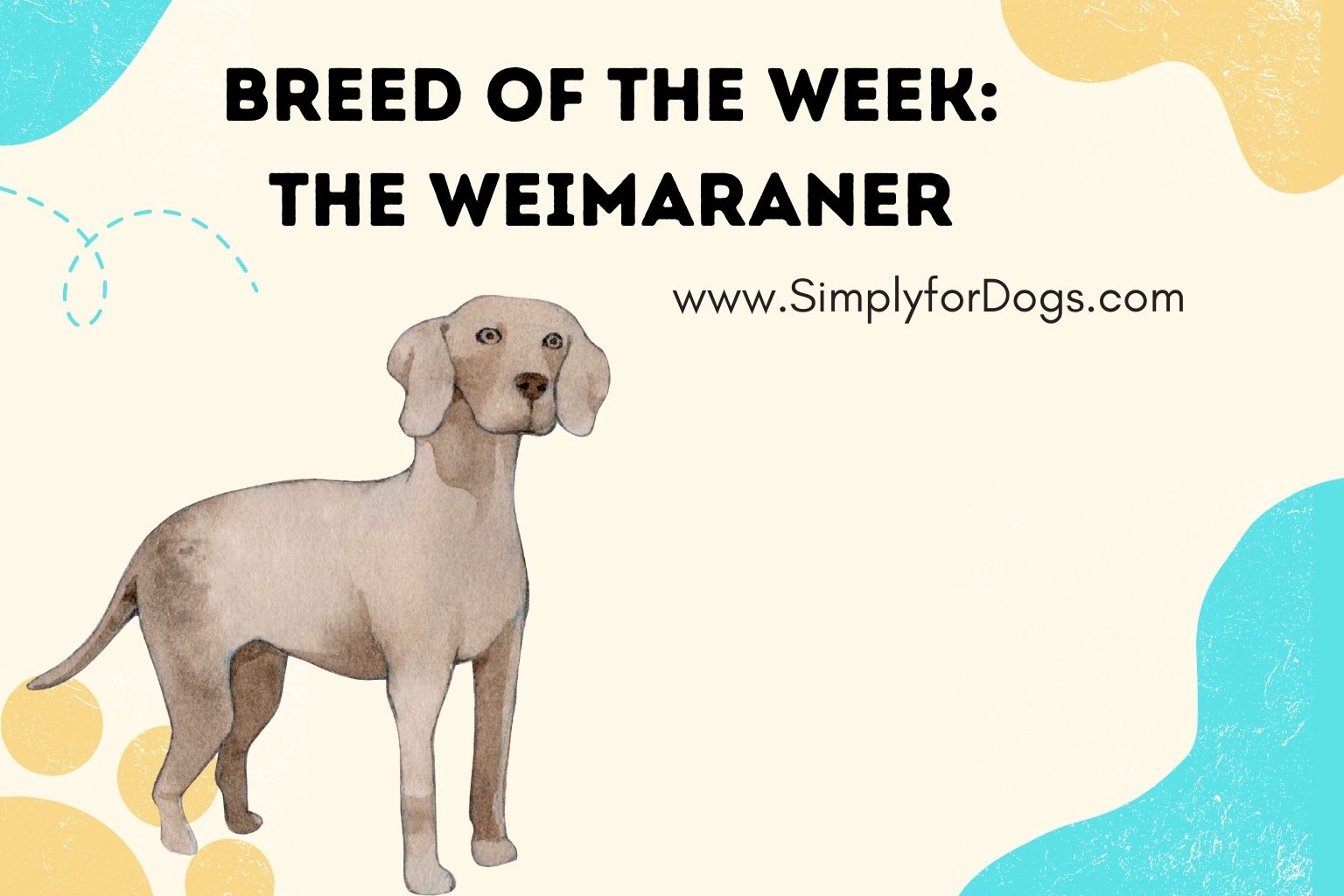 The Weimaraner has his roots in big game hunting, and was once highly prized by German hunters looking to bag deer or bear. Weimaraners are still used for hunting but might be more likely found today in the show ring, or hanging out with their human family members.

The Weimaraner is a fairly new breed, dating back to the early 1800s. German noblemen wanted courageous, strong dogs that were also fast and smart. The dogs would be hunting companions during the day, and fireside friends in the evening.

The Weimaraner was originally known as the Weimar Pointer. Oddly enough for a breed that is relatively new, the actual breed mix used originally isn’t fully known. The best guess seems to be that the originating breeds would have included the German Shorthaired Pointer, the English Pointer, the Bloodhound, the silver/gray Huehnerhund and the blue Great Dane.

Of course, with the passing of time, the forests of Germany became sparse, and there was little in the way of big game. At that point, Weimaraners were used to hunt foxes, rabbits and birds.

In 1897, a Weimaraner club was formed, with the goal of protecting the breed and maintaining certain standards. The rules were very strict, and no one could buy a Weimaraner without joining the club. The Germans were also not exactly enraptured with the idea of non-Germans owning Weimaraners, which is why, when an American, Howard Knight, wanted to join the club, they allowed it but wouldn’t let him buy breeding stock. Howard got his Weimaraners, but they were neutered.

There’s something to be said for persistence, though, and somehow, in 1938, Howard Knight managed to get some breeding stock. Other breeders also followed suit, and in 1942, the Weimaraner was recognized by the AKC. After World War II, even more Weimaraners came to America, many by American servicemen. By the 1950s, Weimaraners were the number 12 most popular breed in the country.

As is the case with many breeds, the increasing popularity of the Weimaraner meant that there was a lot of bad breeding going on.Quality dropped, and there were many reports of temperament issues. The result was that within about 10 years, the breed numbers dropped by about half.

Fortunately, by the 1990s, the Weimaraner enjoyed a resurgence in popularity, and is now the 30th most popular AKC registered breed.

Weimaraners are courageous, friendly, and generally obedient. They can, however, tend to want their own way, and will try to dominate your household if you allow it. A poorly trained, poorly socialized Weimaraner can be very destructive.

Shyness and aggression are the temperament problems that are most often reported in the Weimaraner, and you have to deal with those issues early on. If not dealt with, you could end up with a biter.

Of course, it’s not all training and socialization; people who will tell you “It’s all in how you raise them” are wrong. Your dog’s temperament will depend in very large part on how you raise him, but heredity is also a factor. So, when you’re picking out a Weimaraner puppy, make sure that you can visit the mother and the rest of the litter. See how they interact with one another. Meet the sire, too, if it’s possible, or other relatives of the parents. This can go a long way toward giving you an idea of the type of dog your Weimaraner will be once he reaches adulthood.

Socialization is absolutely vital. You want your Weimaraner to meet all kinds of different people, see different things, experience different sounds – all things that lead to his becoming a well-rounded dog. I’d also strongly suggest puppy kindergarten for your Weimaraner, so that he can learn to behave politely around other dogs; this can be a bit of an issue with the breed.

Weimaraners are basically healthy. However, there are a few things that you should watch out for.

This condition can affect either hip, and can occur without symptoms. It could, though, manifest as lameness in the hindquarters. Although dogs that have hip dysplasia should not be bred, most affected dogs can usually live full lives with the use of pain medication to help them over the rough spots. In severe cases, surgery may be warranted. In addition to heredity, a factor in the development of hip dysplasia can be overly-rapid growth.

This is a blood disorder that’s very similar to hemophilia in humans. Usually, the tipoff that a dog has vWD is excessive bleeding following a surgical procedure or an injury. Other symptoms can include bleeding gums or nosebleeds. Fortunately, most dogs with vWD can live perfectly normal lives.

This is another clotting disorder. It usually doesn’t present much in the way of problems but can be severe following surgery or serious injury

Also known as gastric dilatation-volvulus (GDV) or bloat, this is a very serious condition that affects deep-chested, big dogs. It happens when gas or air enters the stomach, and the stomach twists. Then the dog can’t belch out the air, and the flow of blood to the dog’s heart is impeded. If this condition is not treated immediately, the dog will die.

You should suspect torsion if your dog is retching but not vomiting or belching, salivating a lot, seems lethargic or weak, or has a rapid heart rate and a distended abdomen. Don’t waste any time getting your dog to the vet; torsion won’t go away on its own.

To reduce the risk of torsion, don’t feed a big meal once a day; give your Weimaraner two or more smaller meals instead. Also, don’t allow him to exercise vigorously or drink a great deal of water immediately after eating.

This is an eye defect that usually occurs before the dog reaches the age of six months. The eyelid rolls inward, and the eyeball can end up being injured or irritated. Surgery can correct the problem.

This is another condition of the eye that can be fixed surgically. With this disorder, the dog has extra eyelashes that are irritating the cornea.

This is a degenerative eye disorder that will, ultimately, cause your dog to go blind. The disorder is hereditary, so dogs that have the condition should not be bred. The good news is that dogs can adapt very well to losing their eyesight. If your dog has PRA, just keep his home environment stable. In other words, keep things where your dog will expect to find them; moving the furniture around would be unkind!

This is essentially a reaction to vaccinations, particularly if they’re delivered in     combination. Symptoms include inflamed joints and tissues, a high white blood   count, and fever. Most of the time, reactions happen between the ages of 12 and 16 weeks. For that reason, only the core vaccines (parvo, parainfluenza,          distemper and adenovirus 2) should be given at 8 and 12 weeks to Weimaraners. Rabies should wait until the puppy reaches 16 weeks.

Keep in mind that these are only conditions, diseases and disorders that might affect your Weimaraner. They are not ones that are necessarily going to affect him.

Weimaraners are what I would call very active house dogs. In other words, they need a big yard to play in, but they also very much want to be indoors with their families. In this regard, though, I think we should emphasize house dog; dogs with this kind of energy are not well-suited to apartments.

Weimaraners are notorious “diggers,” so ideally, you shouldn’t leave him outside alone to play, not unless you want your yard “landscaped” in ways that might not be to your liking. Your Weimaraner will love playing fetch with you, or chasing sticks. You can also take him out for a run or a vigorous hike; this is one dog that will be able to keep up with you if you’re an athletic sort of person.

Another reason why Weimaraners shouldn’t be left alone outdoors is that they’re escape artists. They’re very good at leaping over fences, digging under them, and even figuring out ways to unlatch gates. So stick with him outside, and then bring him indoors with you. 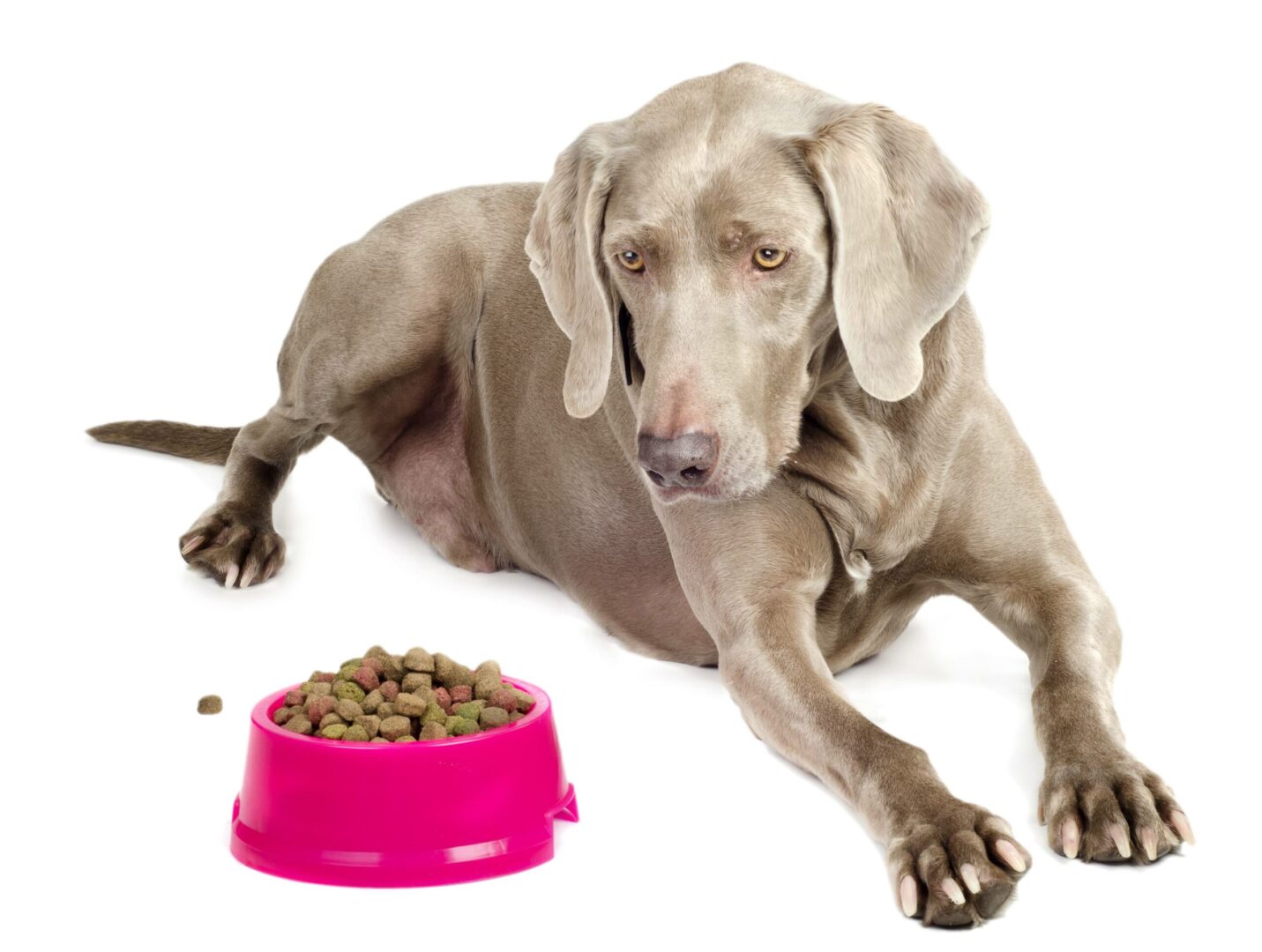 You really should crate train your Weimaraner as well. The breed can be hard to housetrain, and can also become destructive if left alone. Separation anxiety is not uncommon in Weimaraners.

Weimaraners are very smart dogs, but as I’ve already mentioned, they can be prone to wanting their own way. This can make them challenging to train. You’ll need to be gentle but firm.

As to feeding, I’ve already pointed out that your dog’s food intake should be spread over at least two meals. Most Weimaraners require 2 ½ to 3 ½ cups of quality food daily. Older dogs may be less active than younger ones, of course, and will likely need fewer calories. Very active dogs might need more calories.

The Weimaraner has a smooth, short coat in solid colors anywhere from silver-gray to mouse-gray. In Europe, there are a variety of long haired Weimaraners that are recognized in show circles, but the AKC does not recognize this variety. The Weimaraner’s nose is dark gray.

Weimaraners are wonderfully easy to groom. Even when your dog is covered in dirt, a simple brushing should take care of the problem. You might find that you have to bathe him from time to time, though, since this is one breed that really, really loves rolling in nasty stuff!

Since your Weimaraner has those lovely long ears, you should check him regularly to see if he’s developed any redness or tenderness; long-eared breeds can be prone to infections. Clean the ears weekly using a vet-approved solution.

In order to prevent bad breath or gum disease, brush your Weimaraner’s teeth regularly; a couple of times a week is okay, but daily is better.

Because Weimaraner’s are so active, you might get a pass on nail trimming. It’s still a good idea to get your Weimaraner used to having his nails done, though; after all, he may not always be active enough to wear the nails down naturally, and the last thing you want to have to deal with is a cranky old dog who’s not used to having his toes handled!

While you’re grooming, check the eyes, ears, nose, mouth and feet for any signs of inflammation or tenderness. This will help you to identify any possible health issues before they become serious.

Weimaraners are not a good choice for families with toddlers. The breed has a very strong prey drive, and is likely to chase little ones if they run. They’re also big enough to knock a small child over. Active, older kids who have been properly educated in how to behave around dogs (i.e. no ear pulling, no waking sleeping dogs, no rough handling, etc.) will typically be fine with a Weimaraner.

As to other pets, Weimaraners will usually be okay with other Weimaraners, provided that they’re of opposite sexes, or same sex but neutered. They’re not good with small dogs, cats, or other small animals, though. Again, that’s because of the prey drive. It’s so strong in Weimaraners that they can’t even really be counted on to be good with other large dogs, which is why I’ve recommended puppy kindergarten so strongly.

The Weimaraner is an outstandingly beautiful dog that’s guaranteed to get you compliments everywhere you go. He’s also highly intelligent and very motivated to learn but can be stubborn. This is probably not the finest breed for novice dog owners, but if you’re confident and firmyet loving, the Weimaraner could be just right for you.