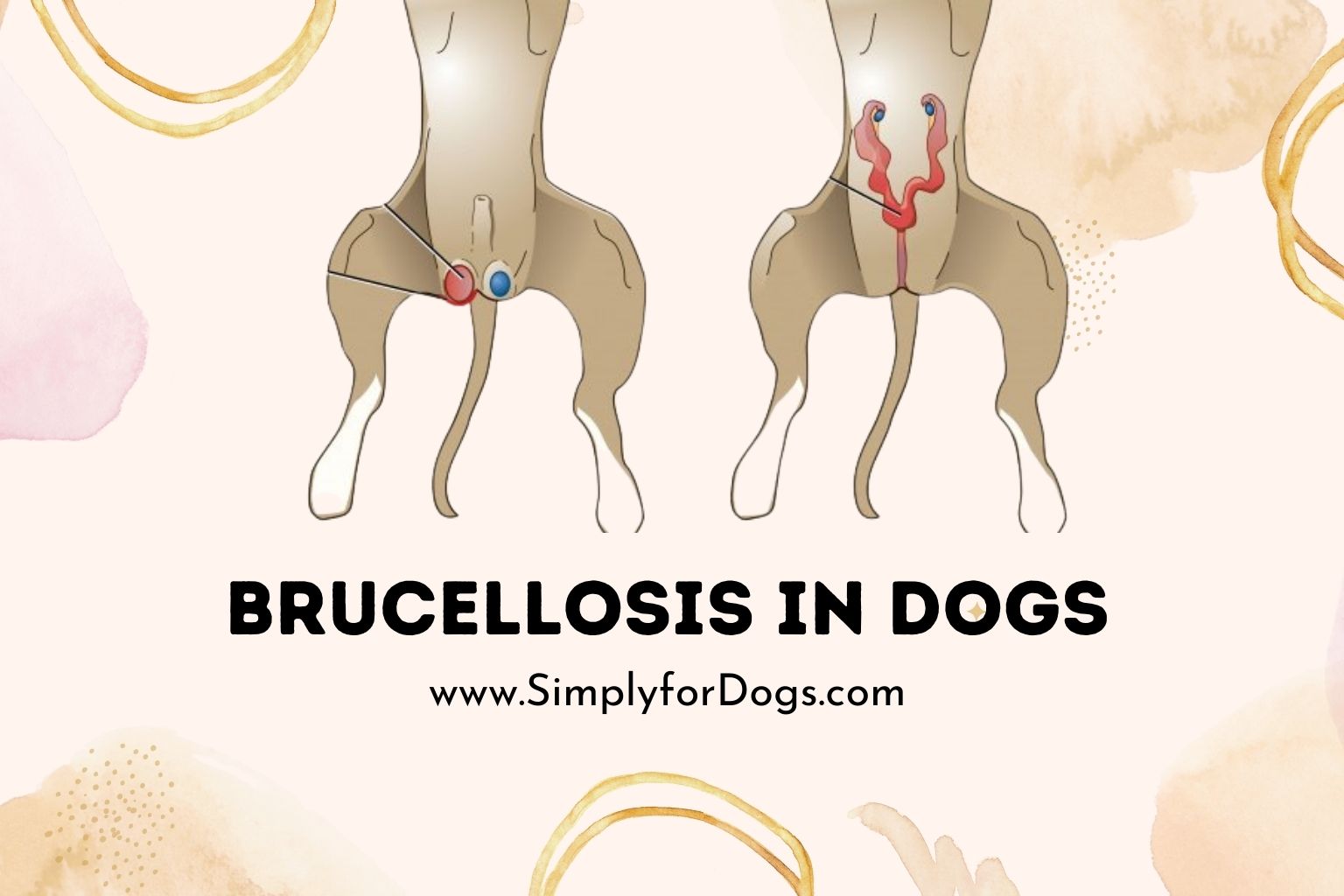 While many animal lovers think of brucellosis as a disease that cattle get and can pass to humans through milk, dogs can also be affected by this bacterial infection. There is a lot of misunderstanding about this disease. This guide will help you understand what brucellosis is, as well as how it impacts dogs. We’ll cover topics like:

It’s very important to understand this disease if you have multiple dogs, if you are a breeder, or if your dogs regularly play with other dogs. This is a very contagious disease that can cause a dangerous infection, in both dogs and humans. This disease is so serious, it is considered a reportable disease – meaning vets are required to inform the local health department when they diagnose a dog with brucellosis. Here’s what you need to know about this disease, and why it’s so serious.

Brucellosis is a disease that in dogs is caused by bacteria called Brucella canis. There are other members of the Brucella family that affect cows and humans, as well as sheep, goats, cattle, pigs, deer, and other mammals. The bacteria in dogs specifically infects the reproductive organs.

This bacterial infection will cause female dogs to get an infection in their uterus. This can lead to difficulty getting pregnant, or miscarriages or aborted pregnancies. Puppies that do make it when a female dog has brucellosis will usually be very weak, and may not live beyond a few days. Puppies that do survive beyond a few days are likely to be very sickly, to have issues with compromised immune systems for the rest of their lives, and to have the disease themselves.

Males with brucellosis are at risk of having scrotal dermatitis, enlarged scrotums, or enlarged testicles, and can also suffer from atrophied testicles. They can also become infertile, or unable to produce semen that impregnates a female.

In any dog with brucellosis, the lymph nodes can become swollen, and the bacteria can also jump to infecting the kidneys, the eyes, the spinal column, and the brain. Therefore, while some dog owners may think that this doesn’t sound like a problem for them because they don’t intend to breed their dogs, this disease should not be ignored. It can become a very serious condition.

Additionally, brucellosis can be passed on to dogs by humans. If a human working in a vet office handles a dog with brucellosis, or handles miscarried puppies, for example, and then touches another non-infected dog, the bacteria can spread to the non-infected dog. (Also be aware that, just like the strain of bacteria that can spread from cows to humans, canine brucellosis can also infect humans as well. It is dangerous for humans to handle bodily fluids from an infected dog without protective gear.)

Across the entire country, up to 6% of dogs test positive for the bacteria even though it has never actually made them sick. This means that even healthy-looking dogs can be spreading the disease. This is why it’s important to have potential mates for your breeding dog tested before they breed.

The main symptoms of brucellosis in dogs include:

When your vet takes a deeper look at a dog with brucellosis, they will also notice other symptoms that you couldn’t see, such as changes to the spinal column, inflamed internal organs, and changes to a dog’s blood work.

The main way to diagnose brucellosis is through a blood test. The vet will perform a test called RAST, which stands for rapid slide agglutination test. Unfortunately, it takes up to 12 weeks to fully detect an infection. While this would be useful for breeders that constantly test their dogs routinely, this doesn’t really help dog owners who suspect their dog could have come into contact with an infected dog. Additionally, it’s common for these tests to not be 100% accurate. False negatives and false positives are both frequently seen with these tests.

The other tests that may be done include:

Overall, a vet will likely use a combination of tests, as well as examining the symptoms, to make a diagnosis of brucellosis in a dog.

The first course of action is to get a dog on antibiotics. This is usually a long treatment, requiring a full eight weeks for two rounds of antibiotics to take care of the common relapse that occurs after the initial course.

Any vet will strongly advise that a dog with brucellosis be spayed or neutered, to protect other dogs from contracting the disease. This can be tough for breeders who have a lot of money and time tied up in a single dog, but the truth is that if they are honest with other breeders, no one will want to pair their dog with the infected dog anyway. The chances of producing healthy puppies are very slim after a dog contracts brucellosis, and the chance of spreading it is very high. Therefore, it’s in everyone’s best interest to go through with neutering or spaying.

During the testing and treatment procedure, a dog with brucellosis, suspected or confirmed, should be quarantined. You should also not allow them to urinate or defecate in an area where other dogs may go when the infected dog is gone.

Additionally, a dog that has once had brucellosis should be tested routinely every season for a full year. It is pretty common for the disease to come back in the future, and there is no permanent cure. We also don’t have a vaccine for this disease, so truly the only way to treat it is to give antibiotics when it pops up, and keep the infected dog from infecting other dogs if possible. 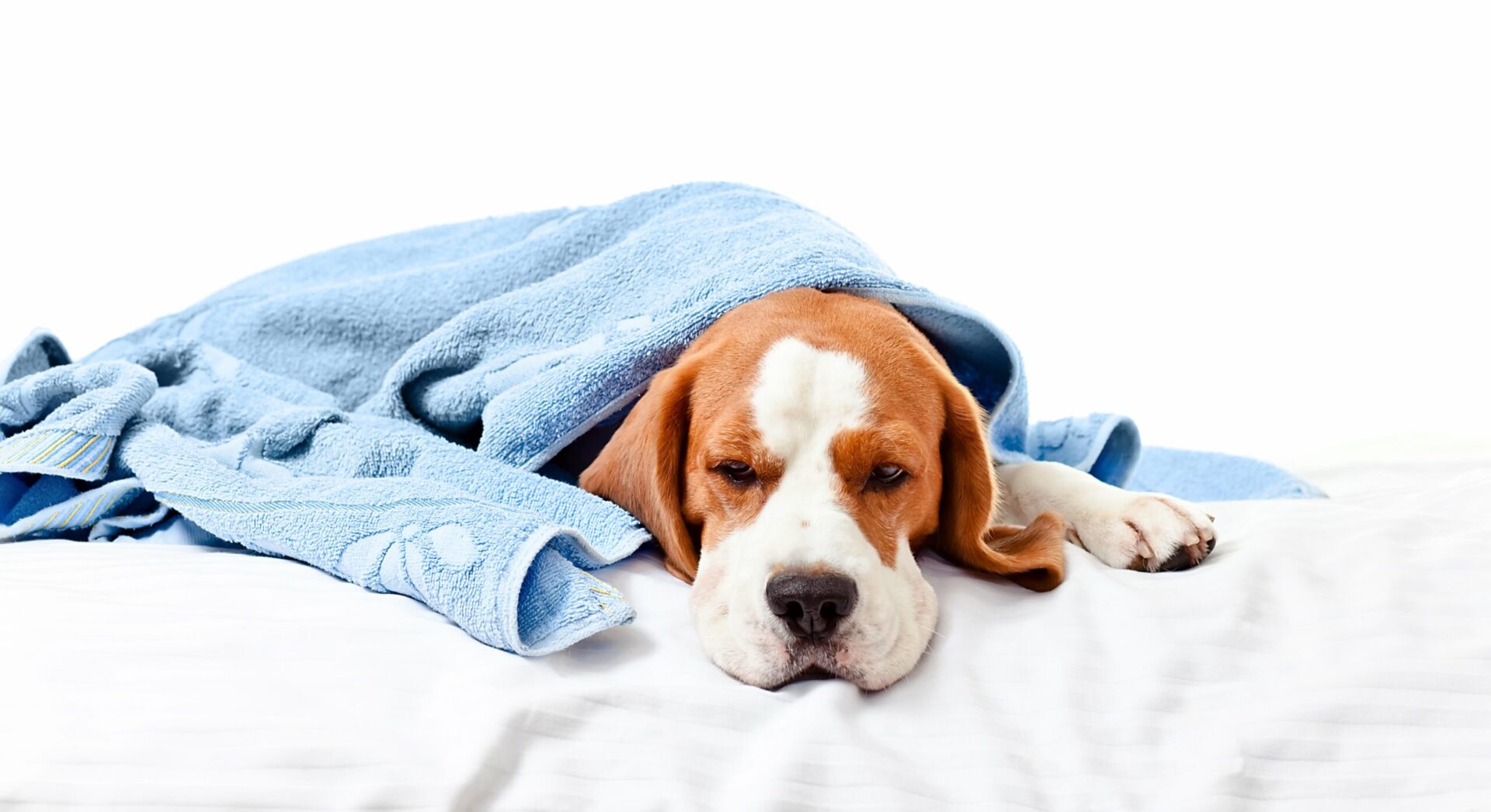 Can Brucellosis Be Spread from Dogs to Humans?

Canine brucellosis can in fact be spread to humans. Most states report cases of canine brucellosis infecting humans each year, although it’s not common for owners to catch it from their pet dogs. The biggest risk is to humans that handle the aborted or miscarried puppies – so, breeders or veterinary workers. However, if a pet owner cleans up a miscarriage from a dog with brucellosis, they are at risk for catching the disease.

The people who are most likely to catch this disease are pregnant women, children, the elderly, people receiving cancer treatments, people who have had organ transplants, people with chronic illness, and those with compromised immune systems. The symptoms of canine brucellosis in people include:

Antibiotics have been shown to help humans fully recover from brucellosis, but the lasting effects of the symptoms, such as life-long infertility, can be very devastating. Additionally, humans generally required long-term therapy to recover from the after effects.

For this reason, many dogs with brucellosis are considered health hazards for humans. In fact, the disease in the United States is a reportable disease, meaning that any vet that discovers a dog has brucellosis is required to report it to the local health department. In some situations, it may be healthier for everyone to have a dog with brucellosis euthanized or rehomed, especially if the dog lives with someone who is immune-compromised, or lives with young children. In some cases, the health department may require that the dog be quarantined or euthanized to protect the health of people and other pets in the area.

The best way to prevent the spread of brucellosis is to either have your dog spayed or neutered, or to be sure that any potential mates are tested before the breeding process. If you breed your dog, have males tested for this disease annually, and have females tested for this disease before each new litter. You should also make sure that any frozen semen you use has been tested as well.

Otherwise, be sure to watch dogs that are used for breeding and ensure they aren’t licking each other’s rear ends or sniffing around each other’s urine or fecal matter. Unfortunately, with no vaccine, the only prevention is vigilance. Repeated testing is very important because it is one of the few ways that we have to stop the spread of the disease before it gets out of hand. If a dog has only one test that gave back a false negative, they could be spreading the disease far and wide before the issue is realized, especially if it is a male that is used to breed with several females in a period of time.

To prevent the disease from spreading to you or other people, be sure that you are wearing long sleeves and gloves when you handle a dog with brucellosis or their bodily fluids. Be sure you aren’t touching your face or letting the dog lick you in the face either. Be careful to thoroughly sanitize your hands and arms after handling a dog or their fluids, or after handling any newborn puppies. Also be sure to sanitize any area where a female with brucellosis has been, because vaginal discharge may not be visible to the naked eye.

So, the bottom line for prevention is to have breeding dogs tested frequently, and to spay, neuter, or quarantine infected dogs.

The bottom line is that this disease is something that is most frequently seen in dogs used for breeding. It’s rare for family pets to catch brucellosis, though not impossible. The disease is spread through bodily fluids including urine or fecal matter, so a dog that gets too interested in a specific area at a dog park could be exposed to the bacteria.

This bacterium can also transfer to humans, and it can cause very devastating, long-term symptoms, such as infertility. Because of this, the health department may require that a dog with brucellosis be quarantined or euthanized in some cases.

There is no vaccine to prevent this disease. The best thing you can do to prevent your dog from catching it is to spay and neuter, or to be very thorough in testing your dog when you are breeding them.

Fortunately, brucellosis in dogs is usually not fatal, and is fairly simple to treat. However, once a dog has this disease, it is most likely that they will continue to have flares throughout their life. The only thing to do is give them antibiotics and keep them from infecting other dogs.

However, if you have adopted a dog with brucellosis, or your dog has contracted this disease, know that they can still have a long and happy life with just a little bit of extra attention and care.