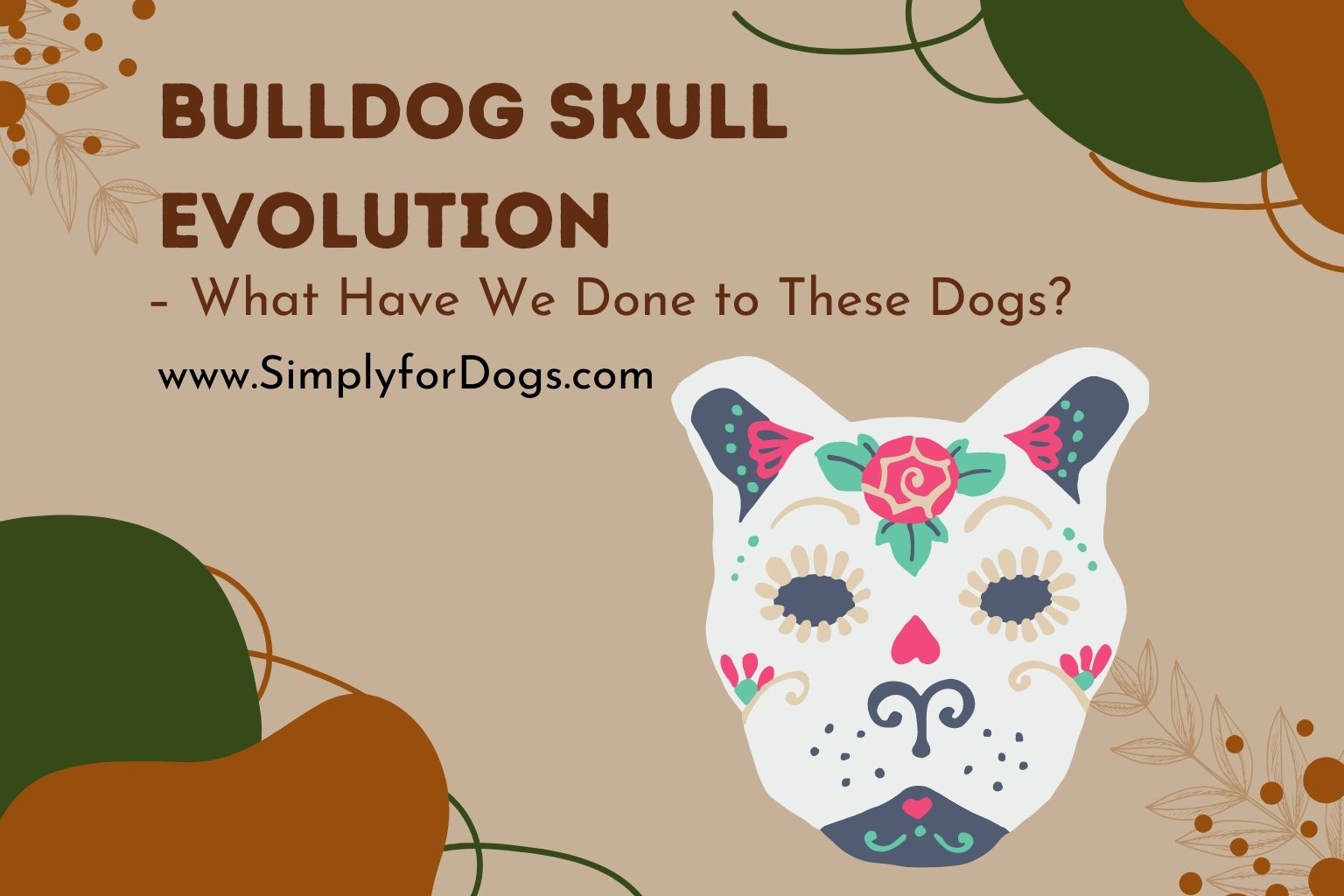 I’ve talked about horrible breeding practices before, in posts like Dwarf Puppies and Dogs – Are They Abnormal? and Why You Should Walk Away from Teacup Dogs. Some of the things that we’ve done to our best friends over the years in the name of “breed improvement” are quite simply heartbreaking, and nowhere is this more apparent than in what’s been done to the English Bulldog.

You may have heard the term “bulldog skull evolution,” but this is probably one of the worst misnomers ever. Usually, when we think of “evolution,” we think of progression – something that occurs naturally to improve a species. Man learning to walk upright would be one example of evolution – it occurred naturally, and is in large measure why, today, homo sapiens is the dominant species.

Bulldog skull evolution, however, is not natural. And it’s not evolution – it’s devolution. It’s a terrible thing that has been done to a once noble breed of dog, by clueless humans. We’ve also done other completely reprehensible things to the English Bulldog, breeding for defects. And yet, the more health problems we inflict on the breed, the more popular it seems to become.

I could probably close out this post right now with that simple statement – humans suck. That’s how disgusted I am with what we’re doing with dog breeds in general, and the English Bulldog in particular. But I’ll keep going, because this is something that I believe right-thinking people should know about, and fight against.

So Much Harm in So Little Time

A hundred years ago, the English Bulldog was a powerful, athletic dog. In terms of evolution, a hundred years isn’t a long time. And yet, in just that short time, we’ve transformed the English Bulldog into one of the breeds with health problems that are so severe – including but not limited to bulldog skull evolution – that many people believe there should be a ban on breeding these dogs.

Notice that I said “a ban on breeding,” which is something that’s for the benefit of the dog. This differs from “breed bans,” which you know I oppose, and which exist purely for the purpose of exterminating certain breeds of so-called “dangerous” dogs, to the benefit of nobody at all.

A ban on breeding the English Bulldog might very well be a good idea, since it would work to prevent the breeding of animals that are doomed to a life of pain and ill health, for the pleasure of stupid humans who think it’s a good idea to breed for defects.

What Have We Done?

Over the years, we’ve bred English Bulldogs for extreme characteristics. We’ve bred for ridiculously shortened snouts, leading to breathing problems, shortened the legs, and even bred for underbites! Bulldog skull evolution has also led to a skull that is far too big. This type of irresponsible breeding should, as far as I’m concerned, be banned.

It would be wonderful if responsible breeders could work to bring the English Bulldog back to what he used to be, but that’s unlikely to happen as long as idiots continue to want horribly deformed dogs, and actually believe that these defects are desirable.

Case in point: Despite all the health problems that plague the English Bulldog as he exists today, he’s still the 5th most popular dog among the 155 breeds recognized by the AKC.

The reason for the English Bulldog’s popularity probably has much to do with his sweet disposition. But the health problems that have been bred into the English Bulldog (and as I’ve said, this includes but is not limited to bulldog skull evolution) have led so many owners to experience heartbreak when their beloved pets die young, often after forcing their owners into near bankruptcy due to the expenses of veterinary care.

What have we done? Nothing good. This once noble breed is now the poster child for everything that is wrong with dog breeding.

“Oh, isn’t he so cute with his stubby little legs,” says the breeder. “Look at that adorable flat face and the big head! And that underbite – isn’t it just adorable? He looks just like a little human baby!”

News flash – an English Bulldog is not supposed to look like a human baby. And yet, it’s these changes that have led, in large measure, to the extreme poor health of the breed today. Why would anyone want to breed an animal knowing that its health is going to be compromised? And yet, that’s what breeders of English Bulldogs do. It’s horrible, it’s cruel, and it’s unethical by anyone’s standards. 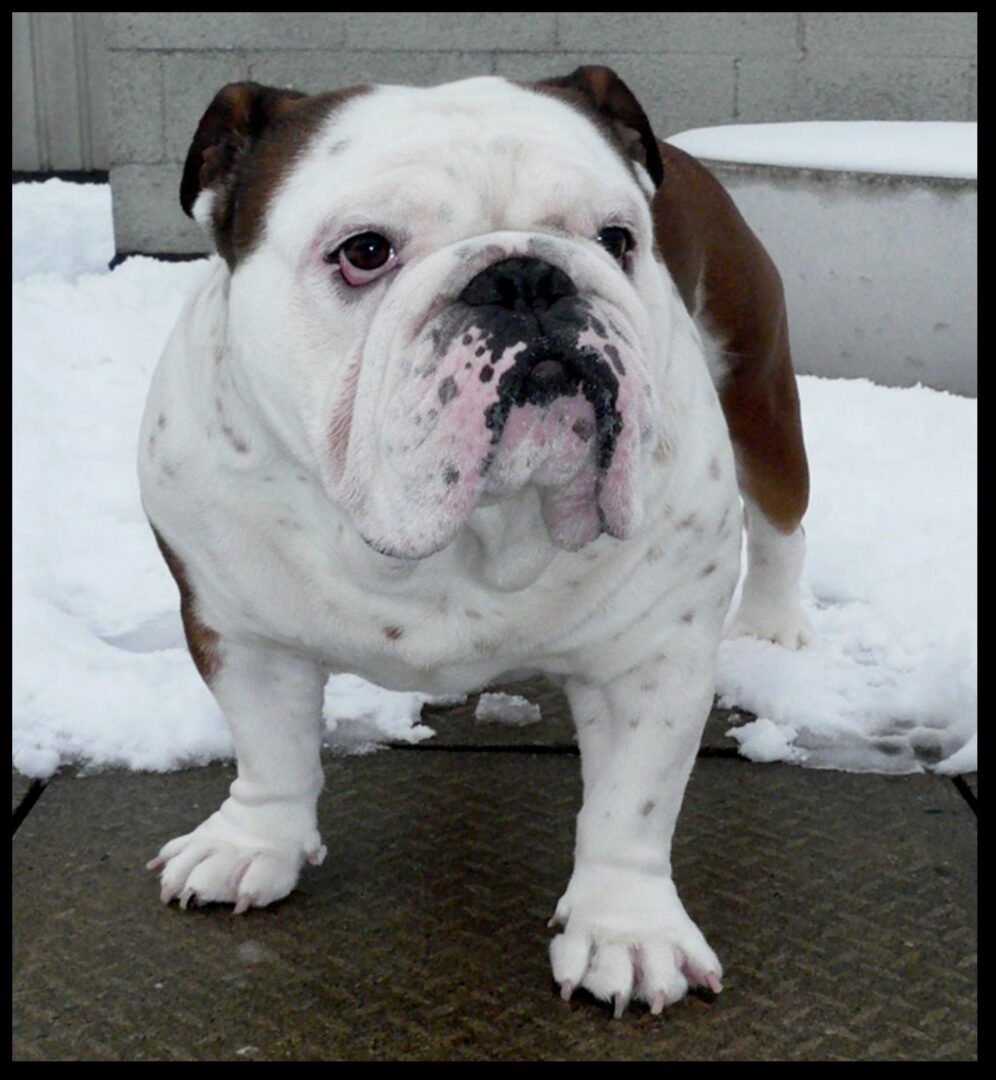 Unethical breeders have taken things to such extremes that many experts believe that improving the health of the English Bulldog will be so problematic as to be nearly impossible. Perhaps the question shouldn’t be so much, “What have we done?” as it should be, “How in the world can we live with ourselves after what we’ve done?

At this point, even the term “breeding” when it comes to the English Bulldog is inaccurate. When I think of breeding dogs, I imagine things like my Janice and Leroy getting together, having a bit of a play date, and then 63 days or so later, presenting me with healthy puppies, Janice having whelped without incident.

When it comes to English Bulldogs, most of them can’t even breed any longer without human assistance – both in the actual act itself, thanks to the short legs and other deformities of the breed, and then in the delivery, which can hardly ever be achieved by any method other than Caesarian section.

Here’s a figure for you – did you know that about 95% of all English Bulldog litters are delivered via C-section? This is because of bulldog skull evolution – the heads of the puppies are so big that the bitch can’t deliver naturally. So, what do we do? Hey, we breed her anyway and then rip her open so that more idiots can have deformed dogs!

Do I Sound Angry?

I expect that I do. I pretty much always sound that way when I’m talking about horrible, reprehensible acts of dog abuse. And the so-called “standards” for the English Bulldog as he is today represent nothing so much as they do abuse, plain and simple.

In addition to bulldog skull evolution being a problem, the breed also is prone to serious respiratory issues, not just due to the short snout, but also due to narrowing of the oropharynx and enlargement of the soft palate. They’re also prone to heart problems and skin conditions, and have the highest rate of hip dysplasia of any breed, with more than 71% of English Bulldogs being diagnosed with the condition.

English Bulldogs also have a very low life expectancy. Usually, they’ll live for 7 or 8 years, which isn’t much compared to other breeds of similar size and weight. Puppy mortality is also very common, since English Bulldogs are highly prone to birth defects.

Why Would We Hurt Those We’re Supposed to Love?

It’s not just the English Bulldog – many other breeds, like the German Shepherd, the Basset Hound, the Dachshund, the Pug and the Bull Terrier have also been bred for extreme characteristics. We’re doing things to harm the creatures that we’re supposed to love most in the world, and for what? Appearance? Fashion? Some skewed idea of cuteness? Something other than trying to create the best, healthiest companion we can have?

Let me get this straight before I go any further – I’m not against breeding for certain characteristics. What I am against is breeding for characteristics that are known to be harmful to the dog. Why in the name of all that’s holy would we want to breed for an even shorter snout in a dog that already has trouble breathing? Why would we breed for massive heads when we know that it makes a bitch unable to deliver naturally? Why in hell would we breed for an underbite?

We do it because humans—well, never mind.

Breed Standards Need to Be Revised

Right now, the English Bulldog, thanks to bulldog skull evolution and other horrific breeding practices, is a dog that shouldn’t be bred at all. Every English Bulldog that’s born today runs the risk of suffering due to deliberately-bred defects, and that’s just wrong on every level.

Surely there must be some breeders of English Bulldogs out there who genuinely care about the breed, and I think it’s up to them to demand that the breed standards be changed. It’s also up to them to refuse to breed to the current standards. The focus seems to be on the marketability of the dogs, and not on health and longevity, and only when “good” breeders say, “We’re not going to put up with this any longer,” things might change. If it’s not already too late for the English Bulldog.

I’m not against good breeding practices. There are some breeders who are trulycare very much about their dogs, and who want to ensure good, healthy litters. Unfortunately, when it comes to the English Bulldog, such breeders are few and far between.

What Can You Do?

What has been done to the English Bulldog thanks to bulldog skull evolution and other bad breeding practices is beyond reprehensible. The welfare of the dogs has been sacrificed on the altar of fashion and that’s just unspeakably wrong. We can only hope that someday, responsible breeders will say “Enough is enough,” and try to restore the breed to what it once was. Don’t hold your breath, though.