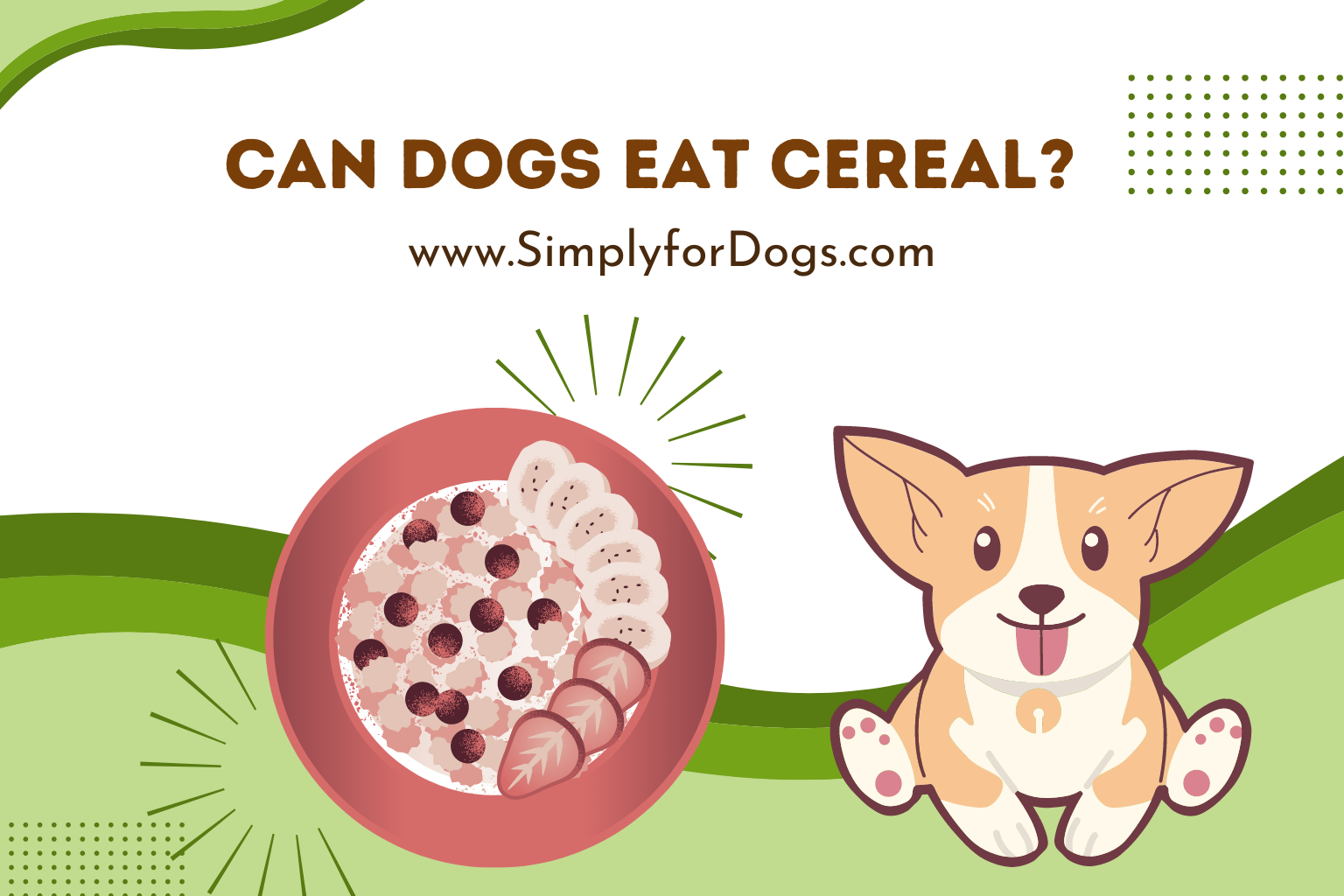 There is no definite answer to this question of whether a dog can eat cereal or not. Not all cereals are made the same. There are many kinds of cereal that have ingredients toxic to dogs, though they may be absolutely fine for us. We have some healthier cereals on our list, too, which can benefit your dog in many ways. Still, the later ones are not too good for dogs to be added as regular dog food. They don’t have much nutritional value and add empty calories to the dog’s daily nutrition. These cereals are just ‘safe’ for dogs and pose no health hazards.

Before you feed your dog these human foods, let’s have a look at which ones are safe for dogs and which varieties of cereals you must not feed your dog.

Can Dogs Eat Cereal Having Sugars?

There is no need for additional sugar in a dog’s diet. Sugary cereals add more sugar to the dog’s daily nutrition than the amount actually needed, thus making him prone to obesity. Obesity can further cause diseases like diabetes, heart diseases, cancer, and arthritis. If a dog is not obese and has eaten cereal with up to 30 % sugar content, consider it an occasional treat for him. Though make sure he has consumed a small amount only. But if your dog is already obese, keep him away from cereals high in sugars.

The same goes for cereals with high fructose corn syrup. It is a food additive made from the starch of corn. The syrup has many carbohydrates in it. You must never feed cereal having corn syrup to your dog if he’s already diabetic or obese.

Can Dogs Have Cereal Stamped as “Low Sugars” or “No Sugar”?

No! Dog owners should never let their dogs eat cereal which is either stamped as low sugars or no sugars. It can have an even more deleterious effect on the dog’s health as compared to sugar. Such low sugar or sugar-free diets contain different types of artificial sweeteners in them. Out of these sweeteners, the most common one used in the majority of human foods is xylitol. This is the same compound that is found in sugar-free chewing gums.

Xylitol is safe for human consumption but is extremely toxic to dogs. Even in small amounts, its consumption can lead to xylitol poisoning in dogs. It causes a rapid secretion of insulin by their pancreas. This rapid insulin secretion causes severe hypoglycemia due to the drop of blood glucose to a dangerous level. Large intake can result in sudden liver failure as well. Common symptoms of this poisoning include vomiting, weakness, lack of coordination, and seizures. Xylitol poisoning occurs 20 to 60 minutes after ingestion and can be as toxic as to cause fatality in dogs.

Can Dogs Eat Cereal Having Chocolate and Raisins?

Never feed your dog cereal containing chocolate or raisins. Both of these ingredients are toxic for dogs. Chocolate causes poisoning in them. It contains caffeine and another compound called theobromine. These compounds can’t be metabolized inside the dog’s body and especially affect the dogs that already have sensitive stomachs. Consumption of large amounts of chocolate in any form can even lead to pancreatitis (inflammation of the pancreas). The symptoms of this chocolate poisoning are usually diarrhea, vomiting, cardiac dysrhythmia, excessive thirst, restlessness, and tremors and seizures in some cases.

Although the phenomenon of chocolate poisoning is known, how grapes and raisins cause toxicosis in dogs is still unknown. Raisins prove to be toxic for most dogs and should never be served in their diets, even not in small amounts. These can be the cause of acute kidney failure in dogs and sometimes lead to their death.

Can Dogs Eat Cereal Having Nuts?

It is advisable not to let a dog eat cereal having nuts in them. Most of the nuts are high in fats and increase the risk of obesity in them. There are too many calories in them, and dogs can develop pancreatitis due to their consumption. Symptoms of pancreatitis include vomiting, diarrhea, loss of appetite, and lethargy. The salt content of nuts leads the thirsty dog to dehydration and osmotic imbalance. They can increase the dogs’ blood pressure and make them susceptible to kidney stones. Nuts that should be avoided as a part of their diet include macadamia nuts, hazelnuts, almonds, brazil nuts, and walnuts.

Can Dogs Have Cereal With Milk?

We recommend not to give your dog corn flakes or any other cereals with milk. Milk and all other dairy products contain milk sugar called lactose. Lactose is a disaccharide that is broken down in the body by an enzyme called lactase. Most of our furry friends are lactose intolerant, meaning that they are deficient in lactase or lack this enzyme entirely. Lactose intolerance may develop in dogs with age.

Lactose intolerant dogs are thus unable to digest milk and milk products. As a result, they show certain signs of indigestion like vomiting, diarrhea, bloating, and abdominal discomfort. If you really want your pup to join you while having corn flakes for breakfast, you can serve him cereals with non-dairy milk like coconut milk or soy milk in small amounts.

Avoid feeding the dogs Trix cereal. It has a great amount of sugar in it, more than the dog’s daily requirement. These cereals also have unrefined grains that don’t make the treat healthy for dogs.

Life cereals are known to have a low sugar content that makes them safe for dogs. But they don’t provide any nutritional benefit; hence are not very healthy but can be given as an occasional breakfast cereal to your dogs to eat.

Oat bran cereal is an excellent choice as a breakfast cereal. They are healthy as they are high in fibers that help fight weight gain and lower cholesterol levels. They are also packed with many nutrients, including minerals, antioxidants, and proteins.

Simple Bran flakes are safe for dogs, but raisin bran flakes pose the same health hazards as the raisin cereals described above.

Well! Technically speaking, Honey Bunches of Oats are fine for your dog to eat. But, they are not recommended as dog food because they lack the essential nutrients needed by your pooch. For example, wheat and corn in these cereals aren’t the required elements in the dog’s diet. Moreover, sugars and preservatives are also present in the cereal, which burden your dog’s digestive system and induce weight gain in him.

Cheerios are low in calories and make a great filler food. Though honey adds sugars a bit higher than a dog requires, these are safe for dogs. But feed your dog these cereals as an occasional treat only. Then, dogs can eat plain Cheerios without any concern.

Cinnamon is safe for dogs and is advised to be sprinkled over dog foods, but cinnamon toast crunch cereal has so much sugar in it that it makes it unhealthy for furry friends.

Though rich in fibers and minerals like iron, they make a healthy cereal, but they are not recommended for dogs. In fact, any type of frosted flakes or cereals should not be eaten by dogs due to their sugar coating. Moreover, these frosted flakes are low in fiber content yet have salt in high amounts.

Let alone the dog food, cereals by Lucky Charms are not even safe as human food. Their cereals are high in calories and sugars and have too little protein and fiber. In short, they don’t give any nutritional benefits and add empty calories to the diet.

These cereals are a great protein source and are naturally gluten-free. Although apparently, they seem to be healthy cereals, they are high in sugars. They are not toxic for dogs to eat but are unhealthy. It’s better to keep them away from the dog’s diet.

Like the above cereal brand, Fruit Loops make cereals have high sugar content. However, too much sugar is not safe for dogs; hence they are not recommended.

Kix cereal is not a healthy treat, but it is not toxic either. These are advised to be fed in small amounts only.

Chex cereal is quite crunchy, and dogs tend to like them. But if you want to keep the pup safe, only feed them the plain ones. Most varieties of the brand are flavored that don’t make cereal good for dogs.

Special K has a great variety of cereals, including wheat cereal, rice cereal, oats cereal, and barley cereal. The manufacturers have used low sugar content making Special K cereal good for dogs. They also have a great deal of fiber in them that helps stabilize blood sugar levels.

Like most cereals, Rice Krispies don’t have any health benefits. They are high in sugars and provide very little nutritional value.

How Much Cereal Can Dogs Eat Safely?

A few cereals are more than enough for dogs to eat. Too much of them can upset their stomach and put them at risk of health issues. Most of the cereals are fine as occasional dog treats only.

Cereals have become a part of human foods and are used for breakfast. Each type of cereal provides a different nutritional value. Some brands make cereals that are not only safe but are healthy for dogs. Before feeding dogs any kind of cereal, you must check out the ingredients and their nutritional values of it. If it does not have many calories and fats, it is safe for them. As too many fats can cause obesity and pancreatitis in dogs. Obesity can lead to high blood pressure, cardiac diseases, arthritis and make dogs prone to cancer.

Similarly, make sure the cereal is low in sugar. Adding sugars to a dog’s diet makes the dog prone to diabetes mellitus and dental problems. Avoid feeding them cereals with chocolates and raisins. Many nuts are not safe either. While people enjoy cereals with milk, dogs can’t have them as they often have lactose intolerance.