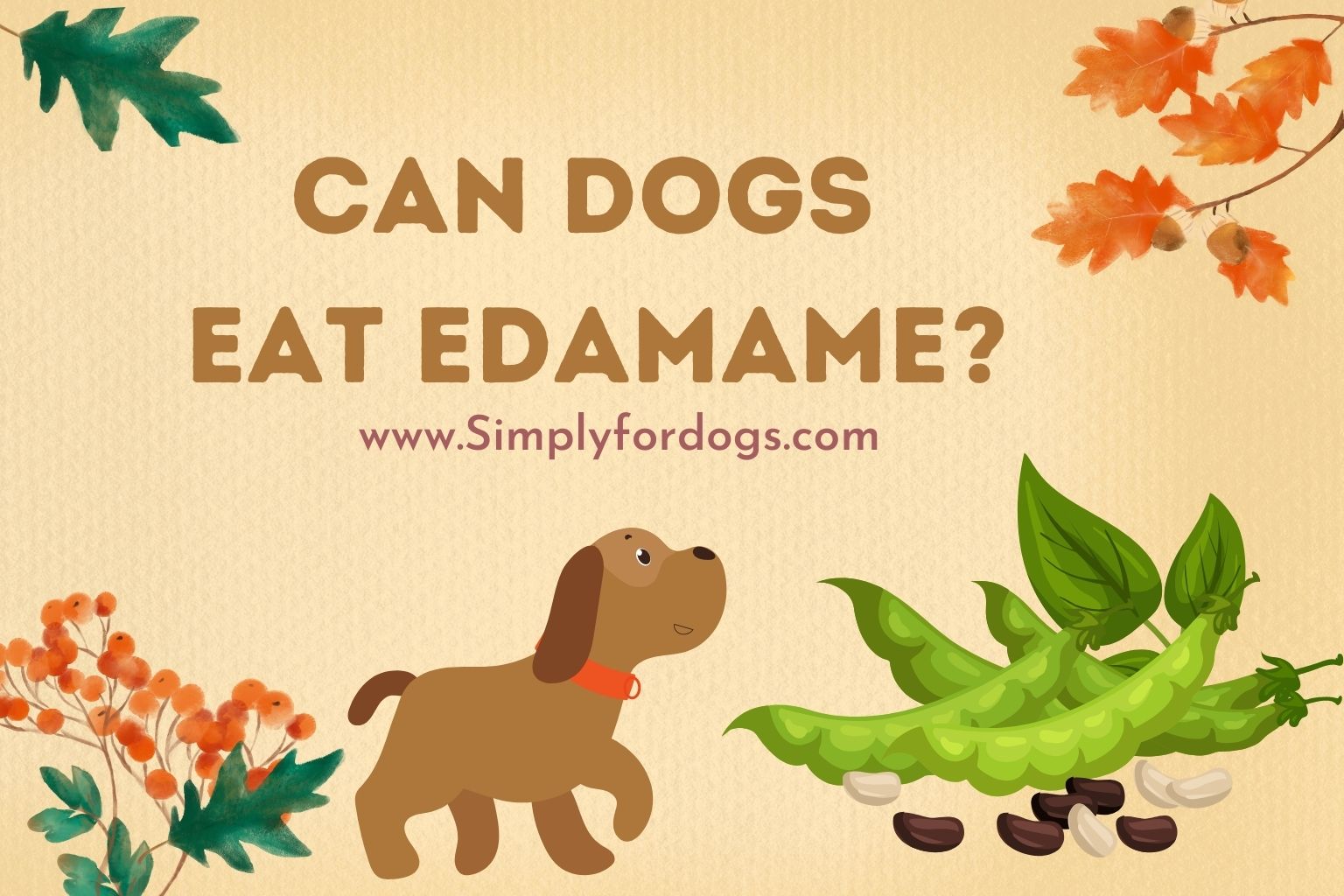 All human foods are not safe for dogs, but many foods are, especially when it comes to a naturally healthy treat such as that of a fruit or a vegetable. It doesn’t mean you can add any fruit or veggie to your dog’s diet. You have to check whether all of its parts are safe for your canine friend or not and how much of it he can consume.

Dog owners are often worried about feeding their dog edamame. Read the complete article to find out the edibility of edamame for dogs.

Edamame is a soy-like vegetable whose beans are also referred to as immature soybeans or little green soybeans. It found its origin in East Asia and is now used worldwide in many popular foods.

Baked edamame beans are used as a healthy protein snack by many people. In addition, many love to buy packets of dry roasted edamame on their way back from the grocery stores.

Is Edamame Safe for Dogs?

Yes, dogs can eat edamame. In fact, it provides many nutritional benefits to dogs. But can dogs eat edamame pods? What about cooked edamame beans? Your mind might be flooded with such questions. So let’s dig into the details chunk by chunk.

One can let dogs eat edamame beans as they are healthy and safe. They are soft, and dogs can eat them easily. They are rich in proteins and many vitamins that are the requirements of a healthy dog. In addition, they are low on carbohydrates and lower blood sugar levels, reducing the risks of diabetes in dogs.

Edamame pods, also called shells, are safe for dogs but only feed young pods with their string-like back removed and the beans. Edamame bean pods are rich in dietary fibers. Too much consumption can cause harm to your dog’s digestive tract. Unlike beans, they are a bit tough.

No, dogs cannot eat edamame raw. Edamame beans are young soybeans that are poisonous in raw form and might cause indigestion. In addition, edamame, soy in an immature form, and fully grown soy have a protein that is toxic for mammals. Therefore, these foods need to be cooked under wet heat to remove this toxicity.

Plain white rice is safe for dogs. Edamame rice is not suitable as dog food as it has garlic, onion, and many spices that are harmful to your dog.

You can make your dog edamame rice that does not contain any of the ingredients not safe for him. That’s the only way he can get benefitted from this tasty treat.

Homemade soup is safe for dogs, and we have already discussed the reasons that make edamame beans safe for them. So there is no reason not to treat your dog edamame soup. But the rules are the same, be careful while preparing the soup and avoid the spices harmful for him.

Many dogs love vegetable soup; you can add a few beans of edamame to it. Just make sure all the vegetables in the soup are safe for him.

Dogs love edamame and show delight for spaghetti as well. So you can let your dog eat edamame spaghetti. Both cooked and uncooked are safe as dog food. Moreover, you can let your guards down by following the same rule: prepare homemade treats while leaving all the spices and ingredients harmful to him out of the meal.

Remember, if you want to see your dog healthy and safe, such meals should not be listed in your dog’s regular diet.

Treating your dog pickled edamame is worse than feeding your dog raw edamame. Pickles contain many seasonings and herbs that are usually not safe for your dog’s health. Therefore, it’s better to avoid any kind of pickle in dog foods.

Can Dogs Have Frozen Edamame?

Fresh fruits and vegetables continuously undergo chemical changes and might not be edible after some time. This is the reason fruits and vegetables are often frozen to avoid their spoilage. The same applies to edamame. The best way to freeze edamame is to remove the shell, boil the edamame beans and freeze. In this way, you can serve it as a delicious snack directly from the freezer to your dog’s food bowl.

Don’t buy frozen edamame for dogs from the market as they have additional chemicals and flavors in them. In the same manner, home frozen vegetable mixes are better than those bought from the store.

The edamame beans are an excellent source of plant protein and a good supply of fiber, vitamins, and minerals. Furthermore, evidence suggests that eating soy protein can help lower cholesterol and even cut the risk of certain cancers because these are rich in antioxidants. So, just like Wendy Demark-Wahnefried, associate director for Cancer Prevention and Control at the University of Alabam, says: “A diet that could ward off cancer doesn’t look that different from the healthy foods you should be eating anyway.”

The calcium and vitamin content of edamame beans is high. Calcium is critical for maintaining bone health and enables your dog to move and run freely. Isoflavones in edamame beans, in addition to calcium, have been linked to enhanced bone density in dogs.

The skin protects the internal organs of the body. Therefore, it has to be strong to provide maximum protection. Edamame has healthy polyunsaturated fats in it that are required for good skin and healthy hair. A healthy coat indicates a healthy dog.

If your dog’s blood cholesterol levels are a bit high, instead of giving him a handful of fries or pretzels, consider popping up a few pods of edamame and feeding them instead. If you do this often, the level of LDL or bad cholesterol levels in his blood will drop. This is because isoflavones in edamame beans lower these cholesterol levels in the blood. In addition, saturated fatty acids, which are likely to cause obesity, weight gain, and obstruction of blood vessels, are absent in edamame.

A good immune system is listed in the top health benefits of edamame. A strong immune system means faster recovery, less fatigue, and a night of sound sleep.

Edamame has dietary fibers in both the shells and beans. In this way, it helps in easing the digestion of your dog. It also reduces the risks of diarrhea and constipation in dogs saving the dog from an upset stomach.

Fibers are fermented into fatty acids by already present bacteria in the intestine. These fatty acids put an end to the growth of bad and pathogenic bacteria. This can help your dog recover from colon injuries and prevent exposure to carcinogens.

While metabolizing the food, the body produces some free radicals. These are highly reactive molecules and can damage lipids, enzymes, and DNA in the cell. The nervous and immune systems are mostly affected. These free radicals can also put your dog at risk of different cancers.

To save the body from the harmful effects of these free radicals, they need to be neutralized as soon as they are produced. Antioxidants serve this function. Edamame is rich in antioxidant content and can save your pup from many potential health risks.

Edamame has vitamin C in it. Besides its antioxidant property, it’s good in reducing inflammation and slowing down cognitive aging. It also has choline in it, which performs the same anti-inflammatory functions.

How to Prepare Edamame for Dogs?

While preparing edamame beans for your dog, remember steamed ones are better than baked and fried ones. Baked goods are not safe for dogs, and fried ones have too much oil content in them. Even in the case of steamed edamame beans, make sure they are not seasoned with too much salt or any other spice. Salt in high quantities can cause salt poisoning in your dog, whose symptoms include excessive thirst, reduced appetite, vomiting, and diarrhea.

You can also prepare the above-mentioned edamame dishes for your dog. Of course, if any dish requires you to fry the beans, stir-fries are better than deep ones. But still, it’s better to avoid fried beans.

How Much Edamame Can A Dog Have?

Initially, to check if your dog has an allergy to edamame or not, it’s best to start with 2 to 3 beans, and the same diet is enough for smaller dogs. But later on, you can increase the amount a little bit for larger dogs.

What If A Dog Overeats Edamame?

Overdose of edamame can upset the dog’s digestive system. Too many edamame beans pose some health issues, including hair loss, ear infections, vomiting, diarrhea, and gas. In addition, edamame is rich in dietary fibers. Overeating edamame can lead to too much fiber in the body, affecting the gastrointestinal system.

Sometimes the dog is hungry and tries to gulp many beans at a time. In such an attempt, edamame beans can cause choking hazards resulting in throat obstruction.

Though safe as dog food, you might also observe some side effects of feeding the dogs edamame. These might include:

Soy contains isoflavones that are also called plant estrogen. These molecules can bind to the estrogen receptors in the body, weakening the estrogenic activity in both male and female dogs. Estrogen hormone is important in controlling sexual behavior and reproduction in dogs.

Hormone imbalance can cause many health problems, including skin issues, bad eating habits, and the pup is easily irritated.

Edamame is immature soybean. If your dog has shown an allergic reaction to any of the soy products, it also questions the safety of edamame for dogs. Check for the signs of soy allergy and consult a dog veterinarian with the appearance of even minor symptoms.

Before adding new food to your dog’s diet, always check for allergies. The best possible way is to feed the dog with a small amount at the start. Then, you can continue providing if it has no side effect on his health. On the other hand, you can abandon the food if your pooch shows any symptoms of allergy and take him to a dog vet as soon as possible.

Edamame is a nutritious legume and provides many health benefits to dogs. But don’t feed them raw. It’s better to cook it. If dogs show allergy signs, take them to a vet immediately.