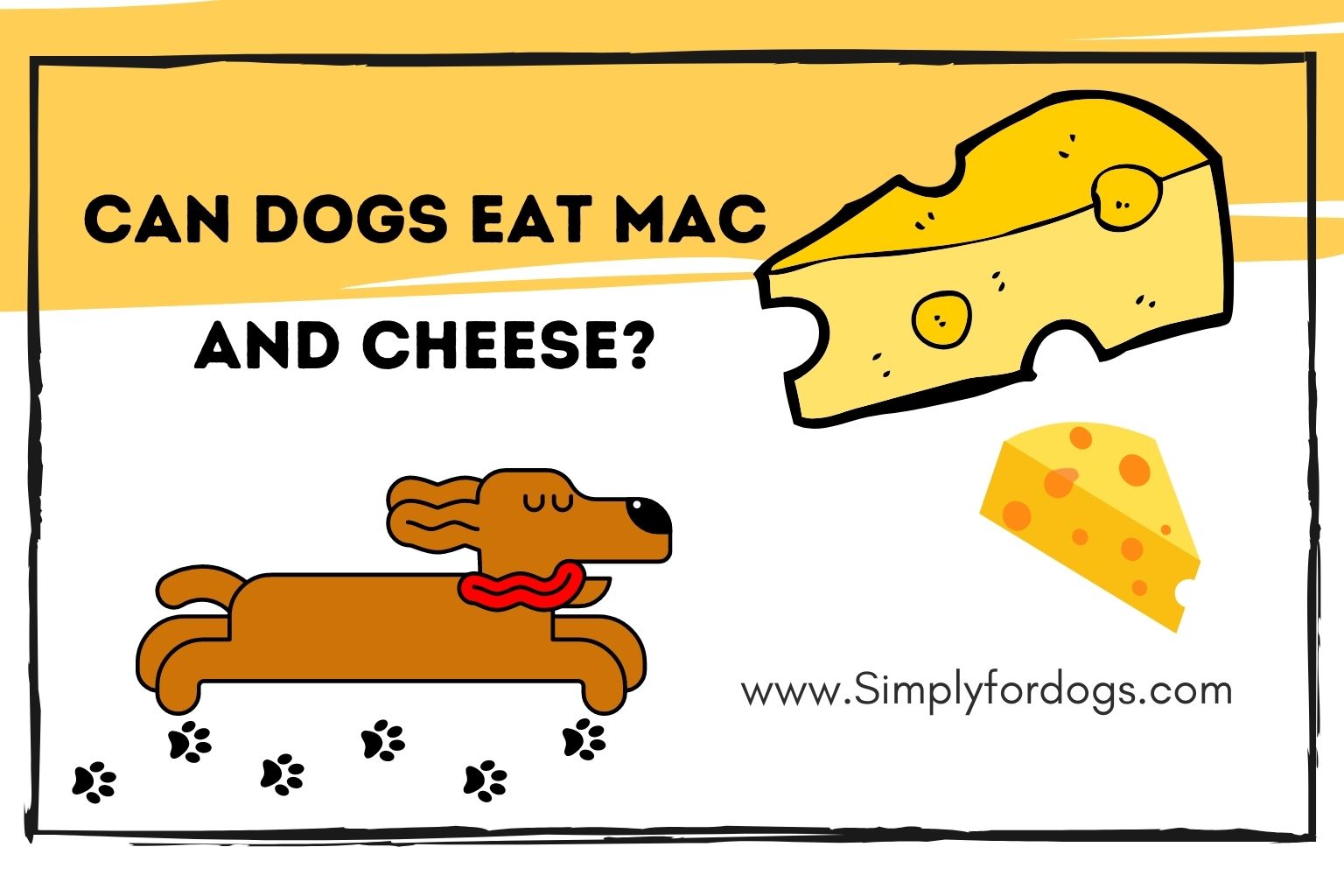 Dogs are generally always attracted to the taste and smell of junk foods. Therefore, there is a clear winner when most dogs are asked to select between a scrumptious fast food and a vegetable. It’s highly probable that your furry friend will come rushing and beg for a bite of whatever you’re having, whether it’s ice cream, deep-fried potato chips, or other fast foods.

It’s certainly pleasant to give him a bite of what he desires and to see him relish the meal. However, if you treat your dog often, it can spoil him, and your bad eating habits may cause him to harm later.

Pet owners should consider twice before feeding their dog’s processed foods; they’ll likely come to regret it later because it’s not a good long-term practice. While some alternative healthy treats instead of the dog’s favorite fast food products may not be as appealing, they will surely protect your dog from health problems later in life.

Why Are Mac and Cheese Popular?

Roundabout 14th century, mac and cheese were found initially in French cookbooks. It was just a combination of pasta, cheese, and butter. Later the dish evolved and included several varieties.

Finally, it was introduced in the United States when Thomas Jefferson ate this food in Paris and fell for the cheesy temptation. He came back to his country and missed the dish. He then sent his cook to learn the recipe who became the first American to train the traditional French cooking.

Now it is an ideal American dish. Some people like to eat it daily and call it their staple, while some call it a celebration dish. In short, it is liked by the young and adult alike.

Can Dogs Eat Mac and Cheese?

You probably remember yourself as eating bowls of mac and cheese with relish when you were a child. But now, It is popular among children and is also gaining popularity among adults. Being highly popular, your dog has possibly become familiar with the aroma of mac and cheese and the appearance of the dish in the serving bowl by now.

Its smell has enticed many canines into temptation, and your dog may also have tasted it from the bowl when you were busy in something else with the bowl in front of you.

Mac and cheese are inexpensive, tasty, and have a long shelf life, but have you ever considered whether it is healthy for your pup or not? The short answer is NO. You may think of it as a classic and straightforward recipe as it’s just macaroni and cheese, after all.

Actually, it isn’t as simple as that because there are more ingredients in it in addition to only cheese and macaroni. Although Mac and cheese is nothing like toxic dog food, it is not a healthy food for the dog. It is because many dogs are allergic to dairy and gluten alone and seasonings, salt, and oils make it even worse.

You can give your dog macaroni. It’s safe for them as long as they are plain and cooked, though they can also munch on uncooked ones. Pasta or macaroni (elbow-shaped pasta) is made from wheat flour, eggs, and water. Eggs can be used as dog food without any concern. They are nutritious loaded with proteins, vitamins, and fatty acids. Wheat is also safe only if your dog has no gluten allergies.

Most dogs suffer from gluten intolerances. Gluten is a protein found in wheat, barley, and rye. When ingested by a dog, their digestive system might act against them, causing gastrointestinal upset, including loose bowels, gas, and mucus in their stools. It might be followed by vomiting, itching, rashes, redness of the skin, ear infection, and loss of appetite resulting in weight loss.

As wheat flour is the primary ingredient of macaroni and pasta, avoid feeding it to dogs with gluten sensitivity. As soon as your dog shows any symptoms of these allergies, contact a vet immediately.

Cheese is perfectly fine as human food, but the same is not the case with dogs. While dogs can eat cheese safely, it’s still not a good idea to feed it to them. It is the calorie content that does not make cheese safe for dogs. Some varieties such as Parmesan, Swiss, and cottage cheese have been listed as low-calorie cheese, but they still have more than the dog’s need.

Too much cheese is harmful to all dogs as it leads to digestive issues. But cheese can cause severe health problems in lactose-intolerant dogs in even small quantities. Many dogs develop intolerance to different foods to some degree, and lactose intolerance is the most common type of intolerance in dogs. It is a condition in which the dog’s body lacks the digestive enzymes needed for the breakdown of lactose found in dairy products into simpler absorbable sugars like glucose and galactose. The condition leads to diarrhea, vomiting, flatulence, and abdominal discomfort in dogs. If your dog is lactose intolerant, the vets usually recommend to avoid feeding him dairy products like milk, butter, cream, and cheese.

How Much Cheese Can a Dog Have?

Too much cheese means too many calories in a dog’s daily nutrition. Even a one-inch cube is too much for adult dogs. For smaller dogs, it’s even worse. But, you can feed a very small portion of this cube. Talking about mac n cheese, it’s high in cheese content. So, it’s better to avoid it.

Moreover, it contains powdered cheese that has a chemical compound called phthalates. It is a common compound of plastics and printing inks. In dogs, it can become the reason for allergies, asthma, and a threat to the reproductive system.

A Homemade Treat for Dogs

You can make dog-friendly mac and cheese treats at home as a pet owner. Prepare plain macaroni and avoid toppings such as tomato sauce. Avoid seasonings. Avoid ingredients like onion and garlic. Avoid any additional components like nuts, especially macadamia nuts, as they are toxic for dogs. Try to use low-fat cheese such as mozzarella and cottage cheese.

Mac and cheese are rich in fat and refined carbohydrates, which contributes to their high-calorie content. About 164 calories are present per 100 grams of mac n cheese. Such a high-caloric meal can make the dogs gain weight, especially if they are already torpid and lazy. There are also some other nutrients as well like protein and fibers.

Macaroni and cheese are also high in salts. Approximately 460 mg of sodium is present per serving, which is relatively high for the dog’s daily serving. Its excessive consumption can lead to high blood pressure. In addition, the cheese in the dish increases its fat content and is, therefore, a wreak havoc on your dog’s health.

How Many Calories Should Be Included in a Dog’s Nutritional Chart?

Mac and cheese can contribute to sufficient calories in a dog’s diet. Moreover, after eating this dish, he might become full, having no appetite for anything else. Therefore, it can lead to the lack of other nutrients in his diet.

What if a Dog Ate Mac and Cheese From Your Plate?

Mac and cheese is not a specific French dish famous in the United States only. In fact, the dish has reached other countries of the world too. So it would be no wonder that you prepared mac and cheese for dinner, and your dog sneaked some of it while you were looking away. No worries, a bite-size of this dish won’t harm your dog. However, it causes problems when eaten in large quantities.

How Much Mac and Cheese Can a Dog Have?

A dog can have mac and cheese in small quantities as long as he has no allergies to gluten and lactose. Moreover, make sure it is plain and does not have any ingredients harmful to dogs.

Usually, dogs don’t like salt and other foods having salt, but when the urge strikes, they will go for whatever is available without considering if the dish is edible for them or not. Dog owners are responsible for ensuring the safety of their dogs’ diet.

Downsides of Over-consuming Mac and Cheese

Don’t do the silly mistake of offering your dog a whole bowl of mac and cheese or an entire box of raw pasta when they can’t have more than a bite. Even if you have not offered him any, he might reach this delicious treat on his own as dogs love such treats. Too much mac and cheese can cause many health risks, including:

The fat content of cheese is the primary source of weight gain. However, High-caloric mac and cheese can also lead to other complications in obese dogs. For example, dogs’ excessive weight gain can make them prone to cancers, heart diseases, hypertension, arthritis (joint inflammation and pain), and kidney stones. These risks in an obese dog can cause a life-threatening situation for dogs affecting their longevity. So, yes, a dog might have a reduced lifespan when obese.

As soon as you get to know that dog has consumed too much of this dish, you need an emergency visit to the vet’s office.

Though mac and cheese is safe but its not healthy, you should choose healthier alternatives for your dog.

A dog can eat mac and cheese once in a blue moon. Only feed a bite or two of the plain one. Though it’s safe but it’s not healthy. Cheese is high on fats. A dog might have an allergy to the ingredients of this dish.

The Carbohydrate content of macaroni can pose the risks of obesity and other complications related to this disease. Considering all the harms of this dish, it’s better to avoid feeding it to a dog and choose other foods that are healthy.