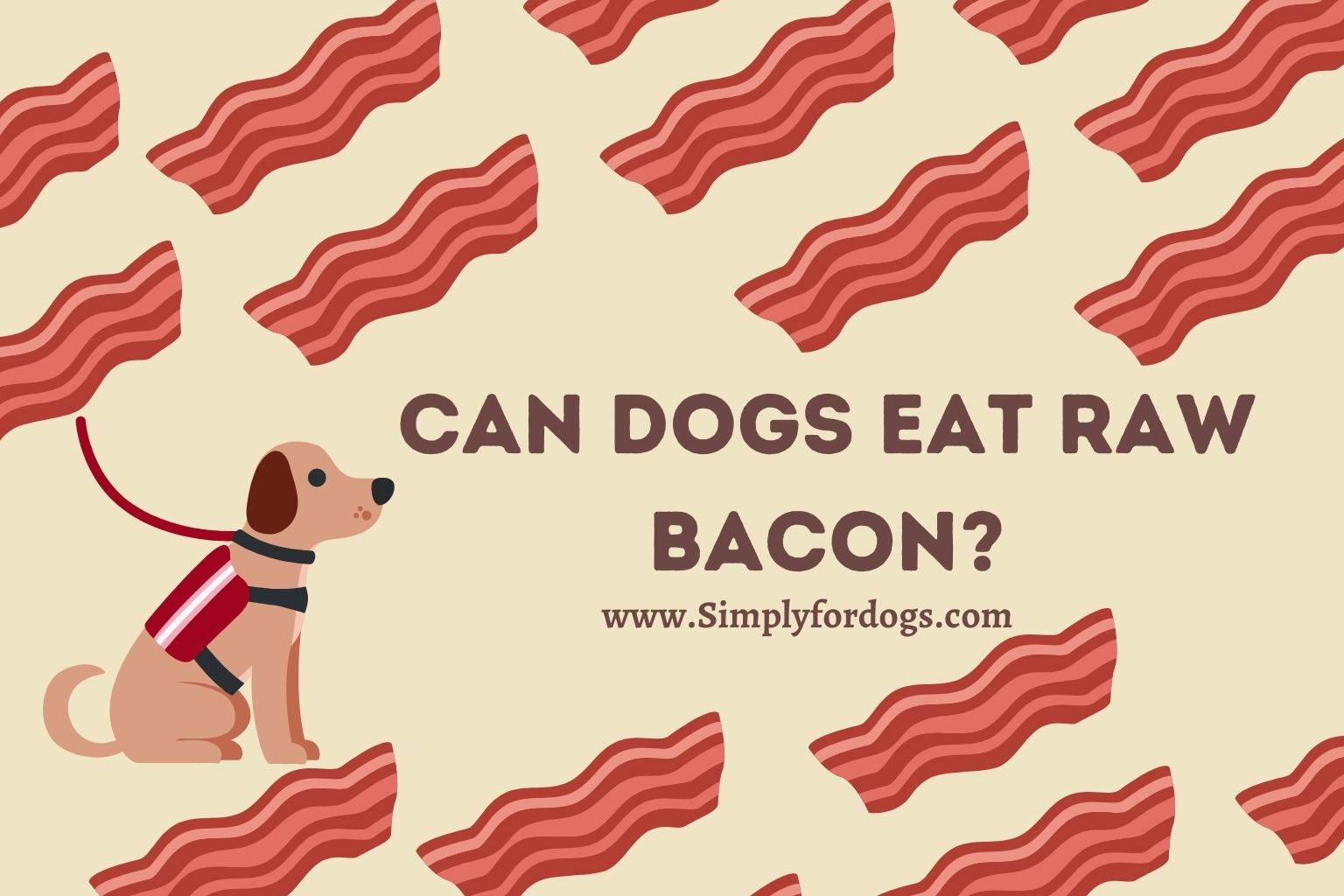 Raw diets have become increasingly popular recently, both for humans and pets. And because dogs love bacon, it might seem like an obvious addition to your dog’s diet. And while the concise answer to the question ‘can dog eat bacon?’ is yes, the real answer is ‘yes, but….’ And it’s a very big but.

We all love our pets and want to do what’s best for them, but expert opinion suggests that we should avoid feeding our dogs a raw diet.

Why Raw Meat Diets Are Popular?

There has been a growth in supposedly ‘natural’ diets. Just look at the number of people who promote paleo diets for themselves. The argument is that they offer us a way of eating food that is closer to what we evolved to eat. And if it’s good for you, wouldn’t it also be good for your furry companion?

The argument is, superficially at least, compelling. Our best friends descended from wild animals. And in evolutionary time, they were little different from their ancestors, who hunted in packs and ate what they caught. Therefore, it makes sense that they are well-suited to eating uncooked meat.

And proponents of these diets claim they have seen improvements in their dogs as a result. These range from having more energy, a glossier coat, or healthier skin, is even that their poop is less smelly! However, no research evidence backs up these claims. And lots of evidence that feeding a dog undercooked or raw meat can be detrimental to their health.

The dog is notable for being somewhere between being an omnivore and a carnivore. Although it is physically adapted to eat flesh, including eating raw bacon, modern science has shown that they have the genes required to digest and thrive on starch.

We should also consider the effect of over 15,000 years of domestication and selective breeding on dogs. Living in close proximity to humans has changed them. And while it might seem like a good idea to feed them how they ate several thousand years ago, perhaps the best argument against a raw food diet is that the life expectancy of those wild dogs is significantly lower than we would hope for our dogs today.

Why Is Bacon Bad for A Dog?

Any dog owner who has ever cooked bacon will know how excited it can make their pet. In addition, many people will consider bacon to be one of the nicest smells they know, so imagine what a dog with a nose that is at least ten thousand times more sensitive will think about it!

However, as anyone who has struggled with a diet will know, it’s usually the things we like the most that are worst for us. And it’s the same with animals. The evolutionary instinct is to strongly crave those foods high in energy, like saturated fat. The logic is that these are rare in a natural environment but rewarding when it comes to providing energy. But in the modern world, where they can be easily picked up from the supermarket shelf, their over-abundance can be dangerous to dogs.

Although it is not toxic for dogs, bacon carries several risks. Bacon typically has a high-fat content, which can cause health issues. In addition, the high sodium content in things like salt and sodium nitrate can contribute to kidney problems.

Uncooked meat can also carry pathogens that can affect dogs just as much as humans and raw pork can also carry a parasitic worm that can cause health issues for your dog if not killed by cooking.

The Risk from Pathogens

Many raw meats are associated with carrying harmful bacteria. Therefore, for just the same reasons as you are recommended to cook meat intended for human consumption, you should cook your dog’s food. Pathogens like listeria or salmonella can negatively affect dogs in just the same way as humans.

It also creates the risk of infections being transmitted onwards. Many people and animals can carry these pathogens while feeling fine. This means there is a risk of infection being spread beyond the animal, which can be a particular danger if the dog’s family includes people at higher risk, such as expectant mothers, the elderly, or the immunosuppressed.

And it’s not even possible to avoid these risks by careful shopping. Even dog food expressly sold as raw can contain these pathogens. A Food and Drug Administration study of commercial raw dog foods found that 8% contained salmonella and 16% contained listeria.

The Risk from Parasites

Many uncooked meats can contain harmful parasites. These will normally be killed by cooking, and while eating dead parasites might seem unpleasant for humans and dogs, they are harmless. However, undercooked pork products carry the danger of trichinella spiralis, a roundworm parasite.

This is a particularly unpleasant parasite and can cause a series of problems if ingested by your dog. The most obvious is an upset stomach, and your dog might exhibit symptoms like vomiting and diarrhea. However, the parasite targets muscles, so it will move beyond your dog’s stomach, causing problems like inflammation, muscle pain, and stiffness in your dog.

The Dietary Risks to Your Dog

Just like humans, a poor diet for a dog can have long-term consequences for your pet. Processed meats, like bacon, contain high levels of saturated fats and can be high in additives. Bacon is frequently extremely rich in sodium and calorie-dense.

The risks from this are obvious. Giving your dog bacon regularly can lead to weight gain. However, it can also lead to a range of other issues, including diabetes, cancer, and cardiovascular conditions – fatty foods can lead to clogged arteries in dogs in the same way they can in humans.

A particular danger, especially if you have a smaller dog, is developing pancreatitis. The pancreas is a small organ in the digestive tract that helps with the digestion of fat. A diet that has too much sodium can result in this becoming inflamed. This can happen with cooked bacon just as much as raw bacon and is the reason you should never let dogs eat bacon grease.

The Danger of Malnutrition

Feeding your dog a raw diet might also mean they do not get all the nutrients they need. A dog’s diet should contain nutrients that they are unable to get from uncooked meat. These include things like vitamin A, riboflavin, thiamin, and niacin. A raw diet will lead to deficiencies if these aren’t provided through supplements.

More generally, cooking makes food more digestible. Indeed, the innovation of cooking food is often seen as one of the advances required for humans to become the dominant species. By starting the process of breaking food down, cooking helps the digestive systems of people and dogs to get the most they can out of their food.

What to Do If Your Dog Ate Raw Bacon?

If your dog ate raw bacon, either by stealing some or because you gave it some, the first thing to do is not panic. Dogs eat pork and bacon all the time, grabbing it from the counter or even the table, and in most cases, there are no adverse effects, even when they eat raw bacon. However, there are some sensible precautions to take.

If the dog took some bacon from a packet, make sure to inspect the packaging carefully to ensure they didn’t inadvertently eat any packaging too. Call your vet as soon as possible if they did.

Try to assess how much bacon they ate as well. Most dogs can eat a little bit of bacon with no adverse effects, although the high salt content is likely to make them thirstier than usual. However, if you have a small dog and think they took a lot of bacon to eat, you might want to call your vet for advice. Smaller breeds, like cocker spaniels of miniature poodles, seem to be particularly susceptible to pancreatitis and other ill-effects, so taking additional care with them is a wise precaution.

However, that bit of bacon will probably not make your dog sick. It’s worth observing them closely for the following day or so to check for any signs of stomach upset like diarrhea or abdominal pain and, during this time, feeding them a bland diet. But, in most cases, one-off ingestion of raw bacon is unlikely to be a problem for an otherwise healthy dog.

What If You Really Want to Feed Your Dog A Raw Diet?

Although the advice would be to use traditional, commercially available food, if you want to feed your dog a raw diet or use raw bacon as a treat, it’s sensible to take precautions to minimize the dangers this can pose to you and your pet.

Similar to when storing and preparing food for humans, ensure that you use separate implements, and sanitize everything, including surfaces, carefully. Make sure you wash your hands before and after preparing food. If you are freezing your dog’s meals, make sure you plan ahead, defrost properly, and use defrosted meat promptly.

And remember that your dog’s saliva and poop is now likely to contain more bacteria than it did. So make sure that your dog does not lick your face, especially soon after eating, and if it licks you when playing, make sure you wash that area thoroughly afterward.

Can dogs eat raw bacon? Well, yes, they can, and as any dog owner will know, dogs can eat worse things! However, most advice is that you should avoid giving your dog uncooked meat. While it is not toxic, it is high in saturated fats and salt. However much dogs love bacon, cooked or not, it is not necessarily good for them, even as a rare treat.

Other Sites Used in Research