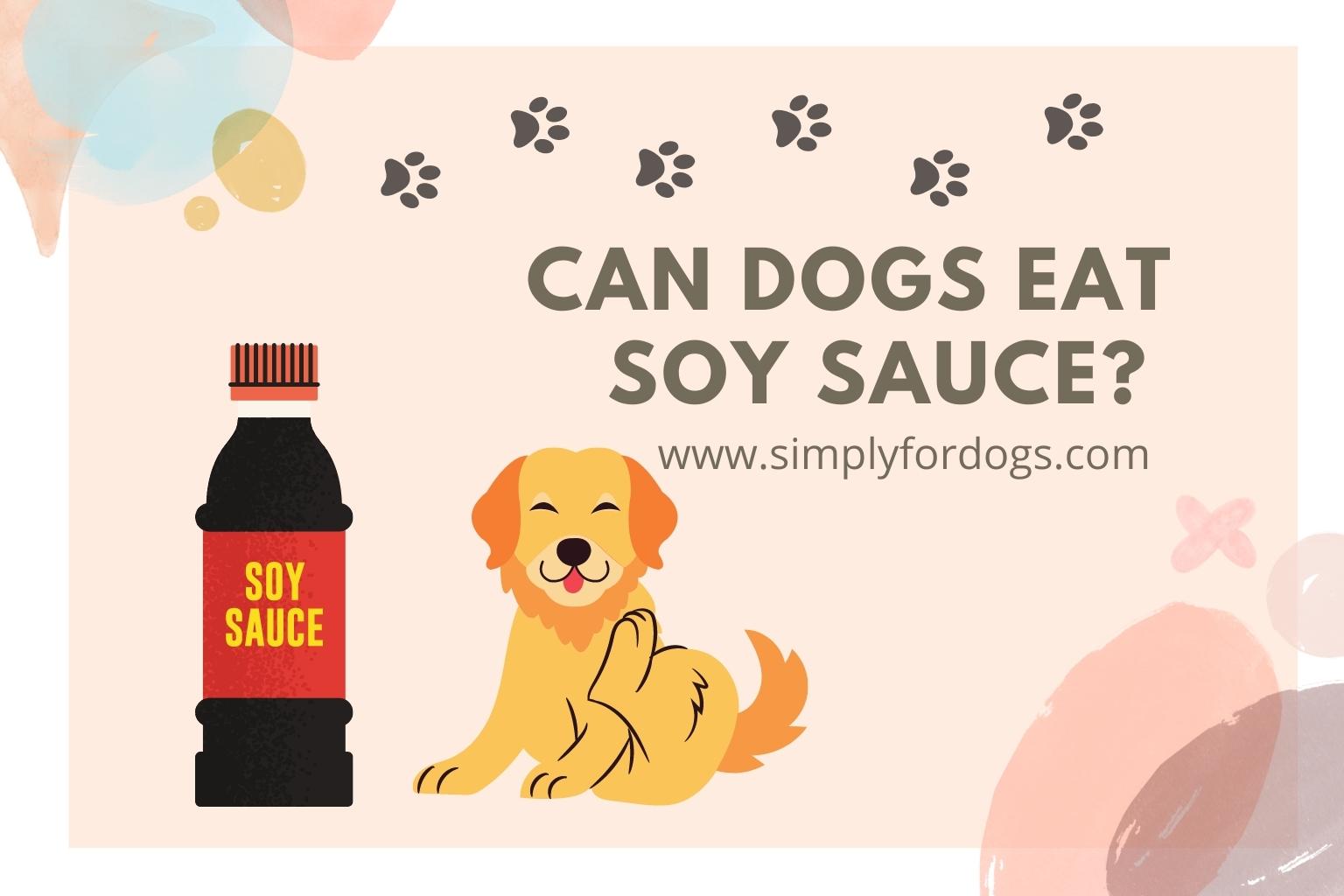 As we all know, dogs have a different digestive system than humans. So, while they can eat certain foods like meat, fish, some vegetables, and a few baked goods, they are extremely allergic to other human foods.

So, is soy sauce one of those poisonous human foods? If so, can dogs eat soy sauce in small amounts, or should pet parents and dog owners completely ban it from their pets’ diet? Keep reading to find out.

Is Soy Sauce Bad for Pets?

The simple answer is an absolute yes. You can’t feed soy sauce to your pet no matter what. It’s simply one human food that’s not safe for animal consumption.

What Is Soy Sauce Made Of?

Soy sauce is composed of 4 main ingredients: soybeans, salt, wheat, and a fermenting substance like yeast or mold. Some varieties can have additional ingredients like sugar, onion, or garlic.

Is Soy Sauce Poisonous to Dogs?

Sadly, yes. Dogs can get very ill if they consume soy sauce; an amount as little as a teaspoon can severely affect your dog’s health. Wondering why?

Well, looking at the ingredient list of soy sauce, you’ve probably already noticed a few problematic ingredients, mainly salt, onion, and garlic. Still, why are these ingredients bad for dogs in the first place? So let’s take a look.

Now, while dogs can have a small amount of sodium every day, their bodies aren’t built to handle excessive amounts of it. Therefore, most veterinarians recommend that they have no more than 100 mg of sodium per day. Still, this amount can slightly vary from pet to pet depending on the dog’s age, breed, weight, and general state of health.

So, how much sodium does soy sauce actually contain? One tablespoon of soy sauce has the equivalent of 902 mg of sodium, which is way higher than the recommended daily consumption for dogs. As such, if a dog simply licks a bowl of soy sauce, it can develop a condition known as salt/sodium poisoning!

As the name suggests, salt poisoning is a form of intoxication that happens due to excess salt intake. The condition can manifest itself with numerous signs and symptoms either immediately or after some time has passed.

The most common symptoms include increased thirst, excessive urination, decreased appetite, vomiting, and diarrhea. Some dogs can even demonstrate neurological issues like overall weakness, lethargy, and disorientation. Others can also start limping, scratching, and occasionally having some form of convulsion, tremor, or seizure.

And the worst-case scenario is that consuming too much sodium can result in kidney failure, which would present itself in the form of the previous symptoms, along with stumbling, mouth ulcers, and bloody urine.

Unfortunately, if the salt poisoning or kidney damage aren’t noticed and treated at once, the affected dog might actually die simply because it had too much salt.

Onion and garlic are sometimes used as additional flavoring agents to give soy sauce that extra kick. And while humans can eat onions and garlic with no problem, dogs are a whole other story.

These vegetables are both members of the allium family, which is notorious for being toxic to dogs due to their content of organosulfides.

In dogs, having these substances in large amounts can cause the breakdown of red blood cells, resulting in a condition known as hemolytic anemia. And in severe cases, dogs can experience heart damage, organ failure, and even death in the worst of circumstances.

Again, these symptoms can appear in as short as a day. However, this mostly happens when the amount consumed is highly significant. In most cases, the symptoms show up a few days from the time of ingestion. Also, keep in mind that certain dog breeds, most famously the Japanese ones, are more sensitive to the allium family members than others.

Soybeans are generally okay for dogs to consume. However, some dogs can develop an allergic reaction to soy protein, which is a commonly recognized allergen.

If your dog is allergic to soybeans, you’ll find it exhibiting strange behaviors when consuming them. For example, You’ll find symptoms like excessive licking and scratching, which can both lead to self-injury, hair loss, and secondary infections. You can also find that your dog has increased sebum secretion and inflamed eyelids.

Sadly, your dog can be extremely unlucky and develop anaphylactic shock, which is deadly if not treated immediately. So, if you suspect that your pet is allergic to soy, make sure to remove it from their diet.

Similar to soybeans, some dogs can have grain or wheat intolerance. When they consume anything containing these allergens, you’ll find symptoms of itchy skin, chronically infected ears, and other symptoms associated with allergies.

What About Other Soy Foods?

Soybeans, unlike soy sauce, don’t have a high salt content. Moreover, they’re rich in fibers, protein, vitamins, and minerals, making them a tasty and healthy dog treat. So, if your dogs like to eat soybeans, indulge it with a treat every once in a while.

Soy milk is a great alternative to regular milk because it’s totally lactose-free, which makes it a great respite for dogs with lactose intolerance. Still, keep in mind that soy milk is high in calories, so don’t feed your dog too much of it, or it will gain a lot of weight.

Thankfully, tofu is one more snack that you can feed your dog without worry. It’s rich in proteins, so an occasional tofu treat is an excellent addition to your pup’s diet. Nevertheless, it can cause bloating, so make sure to offer it in a small quantity.

What Should You Do if Your Dog Ate Soy Sauce?

If your dog was able to sneak past you to eat some soy sauce, here’s what you should do:

First off, try to find out how much soy sauce it has ingested. Typically, the smaller the amount, the less likely your dog’s health will be compromised, and the less you have to worry.

If the amount was small, simply fill and put your dog’s water bowl, as it’ll be feeling quite thirsty. Also, make sure to take your dog on frequent bathroom breaks as its body will be trying to flush out the excess sodium.

Accordingly, if you find your dog drinking and peeing a lot, rest assured that it’s on its way to recovery. However, suppose your dog has consumed extremely high amounts of sodium, and you start noticing any signs of salt poisoning or kidney failure. In that case, you should immediately rush your pet to the veterinarian.

While your dog may not want to drink soy sauce straight out of the bottle/bowl, it’ll gladly eat food that’s covered in it. As such, if you find your dog inching towards your Chinese food, make sure to shoo it away to protect it from any serious health issues.

That’s a definite no! Soy sauce is already dangerous enough for adult dogs, even when eaten in a small amount, so imagine what it can do to small puppies.

Nope. Anything cooked in soy sauce will have high amounts of sodium, which can cause salt poisoning or kidney failure if eaten in an extreme amount. A such, make sure your dog actually eats appropriate dog food that is made to maintain and improve your pet’s health.

Unfortunately, dogs can’t eat soy sauce, mostly due to its salt content. Further, some soy sauce brands even include onion and garlic in their recipe, and both are incredibly toxic to dogs. So, if you find your dog eating soy sauce, make sure to stop it at once and keep an eye on it. And if it starts showing any serious symptoms, like salt poisoning, then immediately go to the veterinarian.