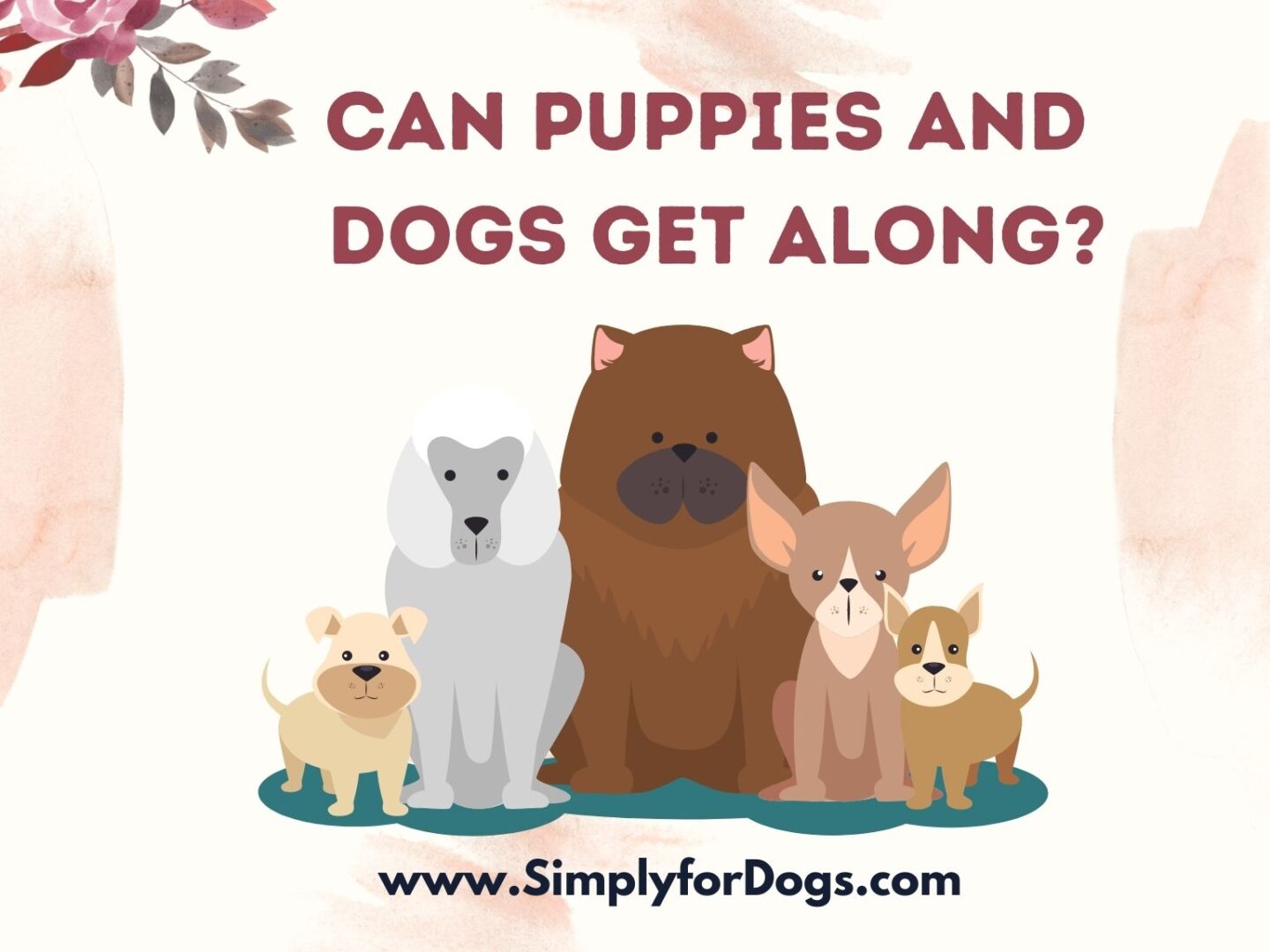 I know how it is, because I’ve been down that road so many times myself. You have an adult dog, and you remember how wonderful it was, and how much fun you had when he was a puppy. Now, you’re thinking that you might like to have another puppy, but you’re wondering how that’s going to play out with your adult dog.

Much of the time, we tend to be far more concerned with what is likely to happen if we introduce an animal of a different species into the household. As I suggested in The Most Cat Friendly Dog Breeds, though, it can be done. When you’re trying to add to your family in this way, it’s best to introduce your older dog to a kitten, not a cat, and best to introduce an older cat to a puppy, not a kitten.

It works the same way with animals of the same species. Most of the time, it’s best to bring a puppy into a home where there is already an adult dog rather than adding an adult dog to a household that already has a puppy. This is the best way of ensuring that puppies and dogs get along well.

Of course, you’re still going to have to do a bit of work if your puppy and dog are going to get along, and there can be some problems along the way. They’re not insurmountable, though, so let’s talk about them and how they can be most effectively handled.

What If Your Adult Dog Hates Your Puppy?

Pull back, regroup, and relax. Chances are that your adult dog doesn’t really hate the puppy. He’s just confused, and might think that he’s being replaced. After all, he was your baby for a long time, and he might not appreciate the intrusion of this “new” baby into the household.

Sometimes, puppies and dogs don’t seem to get along all that well. However, usually, aggression is a response to a certain situation and not due to any inherent dislike. Maybe the puppy is approaching the older dog while the older dog is eating or napping, and the older dog reacts aggressively, but when they’re out in the yard together, it’s all good. Don’t sweat it.

On the other hand, it might be that the older dog simply doesn’t react well to the puppy at all, and stiffens up and growls at the first contact. If that happens, the cause is probably jealousy, and you’re going to have to separate them, and gradually re-introduce them until the aggressive response on the part of the older dog eases back. You don’t want to add to the stress that your older dog is already feeling. 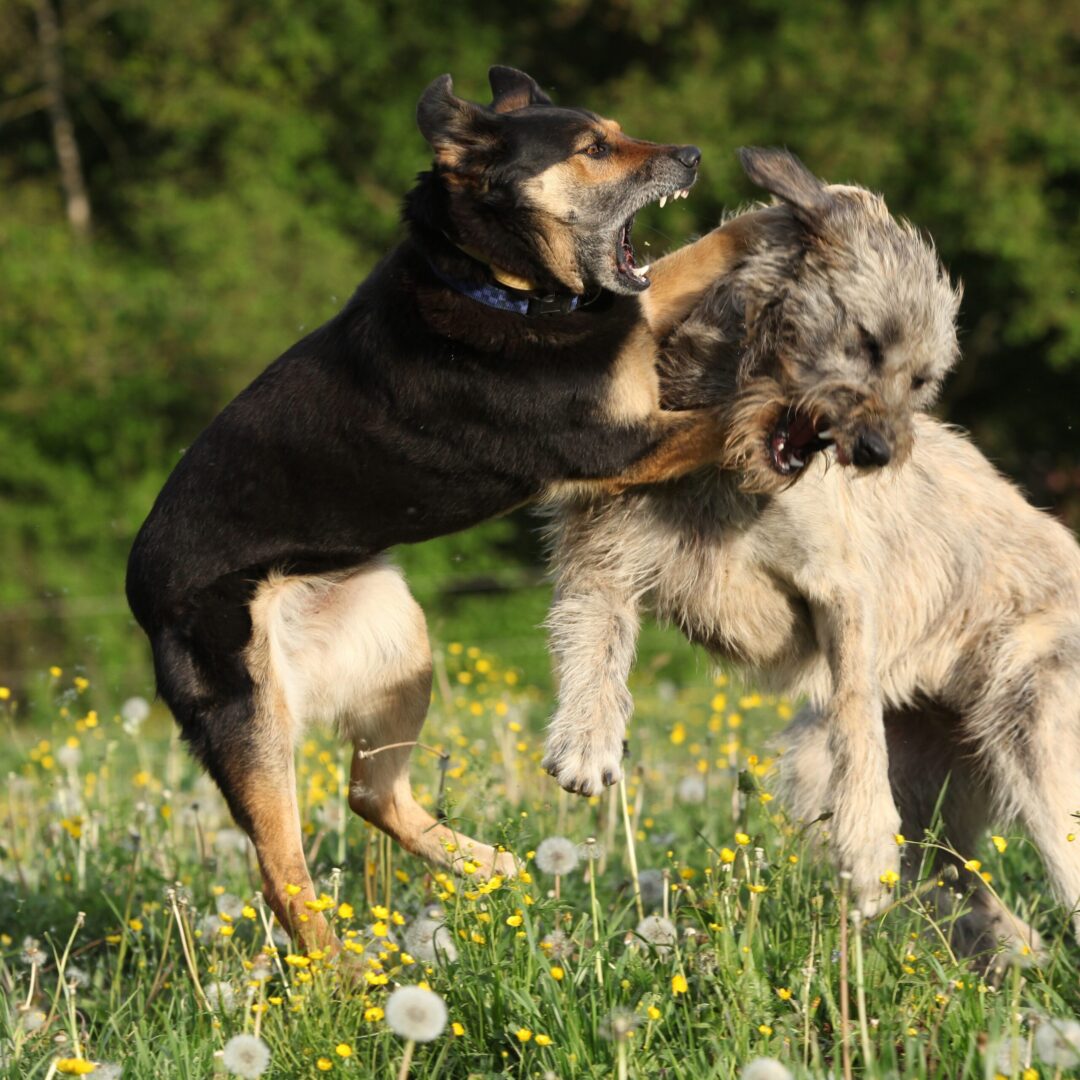 If you don’t want to go with a pro, then you’ll have to do some work. Make sure that, from now on, any encounter that your critters have is a positive one. Puppies and dogs can get along, but sometimes it takes a bit of work, and some positive reinforcement. Take them out and play with them, offer a lot of treats, and use good body language. Let them know that you’re having fun, and they’ll probably have fun too!

Let’s go into a little more detail. Here are five tips for dealing with aggression:

This is absolutely essential. Puppies are still learning proper canine social skills, so it’s important that you’re present any time that the puppy and the dog are interacting, at least for the first week or so, while they’re getting used to one another. You want your puppy to know that you are there for him if your adult dog gets a bit out of hand, and you also want your adult dog to feel confident that you’ll be there to step in if the puppy becomes a bit too rambunctious. Just the fact of you being there will mean that there are fewer chances for the puppy to annoy the dog, or for the dog to growl at the puppy. You’re preventing a habit from becoming entrenched.

From time to time, put the puppy or the adult in a crate or an exercise pen. This gives the adult dog some much-needed time away from the puppy, and can go quite a long way toward facilitating harmony. It’s best to do this on a schedule – pick two or three times that it’s convenient for you to segregate the puppy from the dog, and stick to those times every day. If the dog knows that he’s going to get a bit of a break at regular intervals, he may be considerably more tolerant of the puppy.

Both the puppy and the adult dog need to have a safe place to go. This is where the crate comes in again. In addition to providing regular periods of separation, your dog’s crate door should always be left open. If he’s been kennel trained from puppyhood, it’s very likely that he will “self crate” if things become too intense. If he’s not accustomed to responding to you telling him “kennel,” or “crate,” it’s time to teach him. That way, if things start to get out of hand, you can use the command to direct him away from the puppy before the situation becomes too volatile.

Growling is how your dog communicates, and you should never punish him for growling. If you do, you’re not teaching him that he shouldn’t be annoyed or aggressive. You’re just telling him that you don’t want him to let anyone know what’ he’s feeling. Besides, being growled at is how the puppy learns when to leave the older dog alone. If you find that your dog is growling at the puppy more than you’re comfortable with, instead of correcting, supervise more and give them more “apart” time.

If your dog is displaying displeasure toward the puppy, ignore it if you can, and wait for it to stop. Then, once the behavior stops, give the dog a treat. You’re teaching him that good things will happen if he’s nice to the puppy. Of course, you can only allow growling and snarling for so long, so if it seems as though the behavior is escalating, separate them.

Also, try to catch your dog doing something right. If he shows some sign of affection toward the puppy, again, it’s time for a treat.

Following these tips can help you to facilitate friendship between your dog and your puppy.

If you’ve devised a plan that is intended to foster a good relationship, enabling puppies and dogs to get along, then there’s a very good chance that things will work out in the long run. Most of the time, adult dogs are quite receptive to puppies – more so than they would be to other adult dogs. That’s not to say that it won’t take time, though. Jealousy on the part of the older dog can be a huge factor.

What If It Just Doesn’t Work Out?

Don’t give up early in the game. Most of the time, puppies and dogs just need a bit of time to get used to one another. However, sometimes, it just isn’t going to work out. Most of the time, this happens when you have a very old dog that’s suddenly confronted with a rambunctious puppy. In other words, when an owner realizes that his elderly dog’s days are coming to an end, and he’s “staggering” dogs, making sure that when one dies, there’s another one there to help with the process of grieving.

It’s natural to want to do that, but it doesn’t always work. When it doesn’t, and when it becomes perfectly obvious that it never will work, it might be necessary to re-home the newcomer. After all, you can’t just let that dog that you’ve loved for years go because he can’t accept someone new in your life.

I think this should be a last resort, though. Most of the time, with a bit of work, puppies and dogs can get along. If your old dog just plain doesn’t want the newcomer, though, I think you have to respect his wishes. After all, he was there first.

Most of us who are totally nuts about dogs have ended up in this situation at one time or another. We bring a puppy into the household, and our older dog is basically saying “Why do you need this new baby. Aren’t I your baby anymore?”

Sometimes, all you need to do is make a huge fuss over your older dog, while gradually introducing your puppy into the mix. Most of the time, puppies and dogs get along very well, but it can take a bit of work.