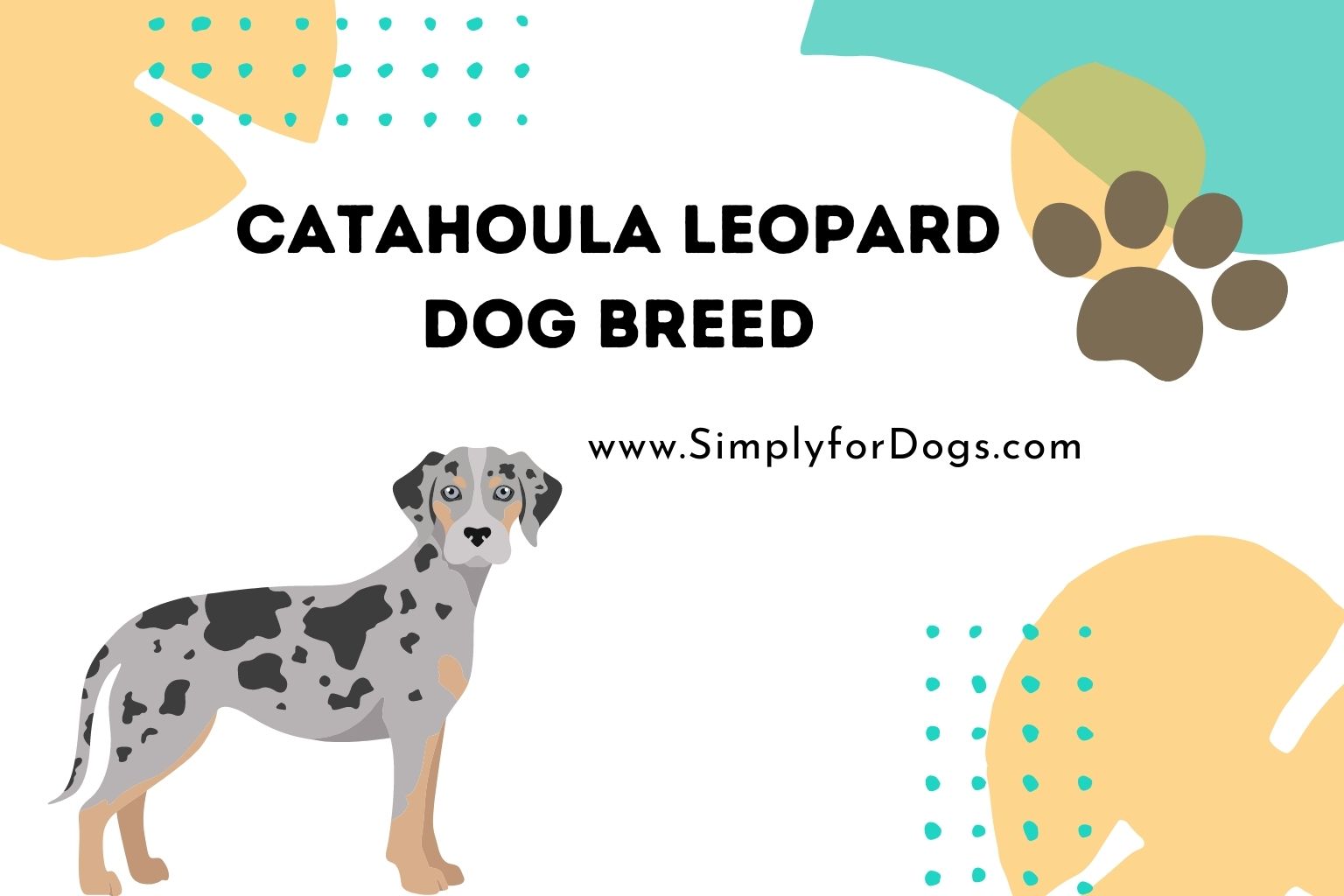 If you haven’t heard of the Catahoula Leopard Dog breed, that’s probably not surprising. The Catahoula is extremely rare, and in fact not well known at all outside of Louisiana, where it is the official state dog. Catahoulas are stunningly beautiful, and you can bet that if you own one, everybody and their dog (sorry, couldn’t resist!) will be coming up to you wanting to know what breed you have and where you got him. So, if you don’t like meeting total strangers, this might not be the breed for you. If you’re sociable and love having a dog that people will admire, though, you could do a lot worse than to consider the Catahoula Leopard Dog. Keep reading to learn more!

Catahoula Leopard Dogs embody beauty and grace, with their athletic build and beautiful coats (frequently spotted, but could also be patchwork, brindle or solid). Another thing that will strike you immediately when it comes to the Catahoula is the eyes – often, they have different-colored eyes (combinations of green, brown, blue or amber), and sometimes even eyes that are two colors in the same eye. These are called “cracked eyes.”

The Catahoula is not recognized by the American Kennel Club, but is a part of its Foundation Stock Service. This is essentially a recording division, which keeps records for breeds that are rare and might one day be recognized. At this point, though, without official AKC recognition, the Catahoula is not permitted to compete in conformation events sanctioned by the AKC.

Catahoulas have a great work ethic, and bond strongly with their humans. They’re not necessarily the right choice for everyone, though, so make sure to keep reading, particularly the section on temperament, for more information.

What are Catahoula dogs mixed with? It’s believed that breeding among local dogs, Mastiffs, Greyhounds and Bloodhounds led to the Catahoula that we know today. Some say that even local red wolves may have made a contribution. Early on, these dogs were used to round up cattle and even wild hogs. This is why they’re sometimes also known as “hog dogs.”

Catahoula Leopard Dog puppies are much like any other breed, in that early socialization is vital. A young Catahoula should be exposed to as many people, sounds, sights and experiences as possible if he’s going to grow into a good canine citizen.

Socialization is, fortunately, very easy. All you need to do is take your Catahoula Leopard Dog puppy with you when you go places. Visiting a friend? Take the puppy! Heading to the mall? Take the puppy, hang out in the parking lot for a while, and wait for people to come over and ask you what kind of dog your beautiful friend is! Once his shots are fully up to date, take him to the dog park.

Speaking of shots, it should pretty much go without saying that immunization is essential. Dogs can be vulnerable to any number of illnesses, like canine distemper, parvovirus, rabies and more. Immunization means that your dog will have no chance whatsoever of contracting any of these diseases. Not immunizing means that you’re playing Russian Roulette with your dog’s life. The other thing is that most shots don’t cost all that much, but treatment for preventable diseases can be very expensive – in the thousands for parvo, for example, and even if it’s cured, the dog will probably never enjoy truly good health. Please, just get the shots!

Training is also important for your Catahoula Leopard Dog puppy. Every dog should be taught basic obedience – sit, stay, down, come and so on. You can handle the training on your own, or you can enroll your Catahoula Leopard Dog puppy in obedience classes, where you and he can work together with other humans and dogs to learn obedience. This is a great help when it comes to socialization, too!

The Catahoula Leopard Dog temperament is such that it makes the breed ideal for hunting (anything from squirrels on up to bear and wild boar), search and rescue, and just about anything else that requires a highly intelligent, adaptable, tenacious dog. Catahoulas love to work, and need a lot of physical and mental stimulation in order to be content. If you’re a couch potato with no time to exercise and train your dog, stop right here and consider another breed – the Catahoula is not for you.

Catahoulas can be very independent and curious, so they’ll frequently “go on walkabout” if they get bored. This is another reason why obedience training is essential. If you’re going to own a Catahoula, you need to commit to spending a lot of time with your dog.

Are Catahoulas good family dogs? Yes, usually they are. They love being part of a family unit, and they’re very protective of their humans. They’re also usually good with kids – in fact, some breeders refer to them as “babysitter dogs,” although I wouldn’t go quite that far. Kids can be rambunctious, and sometimes rough with dogs, and you should never leave a young child unattended with a dog of any breed.Also, teach your kids not to pull on the dog’s ears or tail, and not to approach the dog while he’s eating or sleeping.

Because Catahoulas were originally bred for hunting and herding, they might not always be good with other animals, unless they’re raised with them. It’s best, generally speaking, to introduce a Catahoula puppy to an adult dog or cat rather than to bring an adult Catahoula into a household with a puppy or kitten. It’s also best, if you’re planning a multi-dog household, to introduce a dog of the opposite sex. Dogs of the same sex will often fight one another, sometimes to the death.

As to strangers, Catahoula Leopard Dogs will usually be a bit wary. Once your Catahoula perceives that a new arrival is a friend of yours, though, he’ll typically be cordial. Obedience classes can be of great benefit in this regard, too, as your Catahoula will have an opportunity to meet a lot of friendly strangers.

As of the time of this writing (January 2020), the going price for a Catahoula Leopard Dog puppy is anywhere between $300 and $500.

The American Kennel Club does not list any Catahoula Leopard Dog Breeders on their Puppy Marketplace. This is no doubt due to the fact that the AKC does not yet recognize the breed. Your best bet is to look for local breed clubs that might be able to put you in touch with reputable Catahoula Leopard Dog breeders. Be very careful if you’re looking for breeders online – there are a lot of scams out there, so be sure to do your research, check for feedback, and never send money for a puppy that you haven’t actually met.

If you have found a breeder that seems to be on the level, make sure that they’re comfortable having you visit the mother and the litter. In fact, good breeders won’t just allow you to come and visit – they’ll insist on it. If a breeder appears reluctant to have you around, back away quickly and find another breeder – there’s something off, and it’s possible you’re dealing with a puppy mill operator.

A good breeder will also want to know a lot about you. If a breeder isn’t asking any questions, they don’t much care where their puppies end up. Which also sort of means that they don’t care much about the puppies in the first place! If you’re not asked about your living arrangements, your plans for veterinary care, how you plan to train your puppy, what you plan to feed him, and so on, then you’re probably not dealing with a good breeder.

Look at it this way – if you had puppies for sale, what would you want to know about potential purchasers? What questions would you ask? If you’re not being asked those same questions, think twice before buying a puppy.

This is another area where you need to be extremely wary of scams. There are any number of bad actors out there who will tell you that they have Catahoula Leopard Dog rescues just waiting to be adopted, but as of right now, all I’ve been able to find is broken links, and the occasional site that might be reliable but has no dogs available.

If you are lucky enough to find a reliable rescue site (and again, do your research), keep in mind that the Catahoula is a sizable dog, and could have been placed in a rescue facility because of temperament issues. If you don’t have experience with dogs, it might be best to just take a pass.

That’s not to say, though, that Catahoulas, or any other breed for that matter, always end up needing to be rescued because of behavioral problems. Unfortunately, some dogs find their way into shelters because their owners have died or divorced, and they might have no behavioral issues at all. Just be sure, if you do find a rescue facility for Catahoulas, that you ask a lot of questions about the dog’s background. It’s far better to simply walk away if anything seems problematic than it is to put you, and the dog, through an adoption that doesn’t work out.

Catahoula Leopard Dog size is very much dependent on gender. Males are considerably bigger than females, weighing in at 65-90 pounds and standing 22-26 inches. Females usually weigh 50-65 pounds and stand 20-24 inches.

Catahoulas are very loyal and protective, but not aggressive.

You can expect your Catahoula Leopard Dog to bark if someone approaches your home, but they are not among the “barky” dog breeds.

No. Actually, no dogs are truly hypoallergenic. If you have allergies, though, the Catahoula might not be the right dog for you, as Catahoulas shed moderately all year round.

They are very smart, and very trainable.

Pretty much all dogs can swim, although some are less inclined to than others. The Catahoula Leopard Dog’s webbed feet make him an outstanding swimmer.

The usual lifespan for a Catahoula Leopard Dog is 10-14 years.

Most dogs aren’t exactly good at climbing trees, but the Catahoula is an exception.

9. How many puppies do Catahoulas have?

The typical litter is anywhere between 8 and 12 puppies.

Now that you know the facts about the Catahoula dog breed, what do you think? Does this sound like the right dog for you and your family? If you’re willing to invest the time and energy needed to keep this amazing breed of dog happy and healthy, that’s great, and I very much hope that you’re able to find a Catahoula. That’s the biggest problem with the breed – availability. Outside of Louisiana, there just aren’t all that many Catahoulas, and even within the state, not all that many people breeding puppies to sell. If you find one, though, you will have found a wonderful, loving dog that will bring you many years of companionship and happiness.