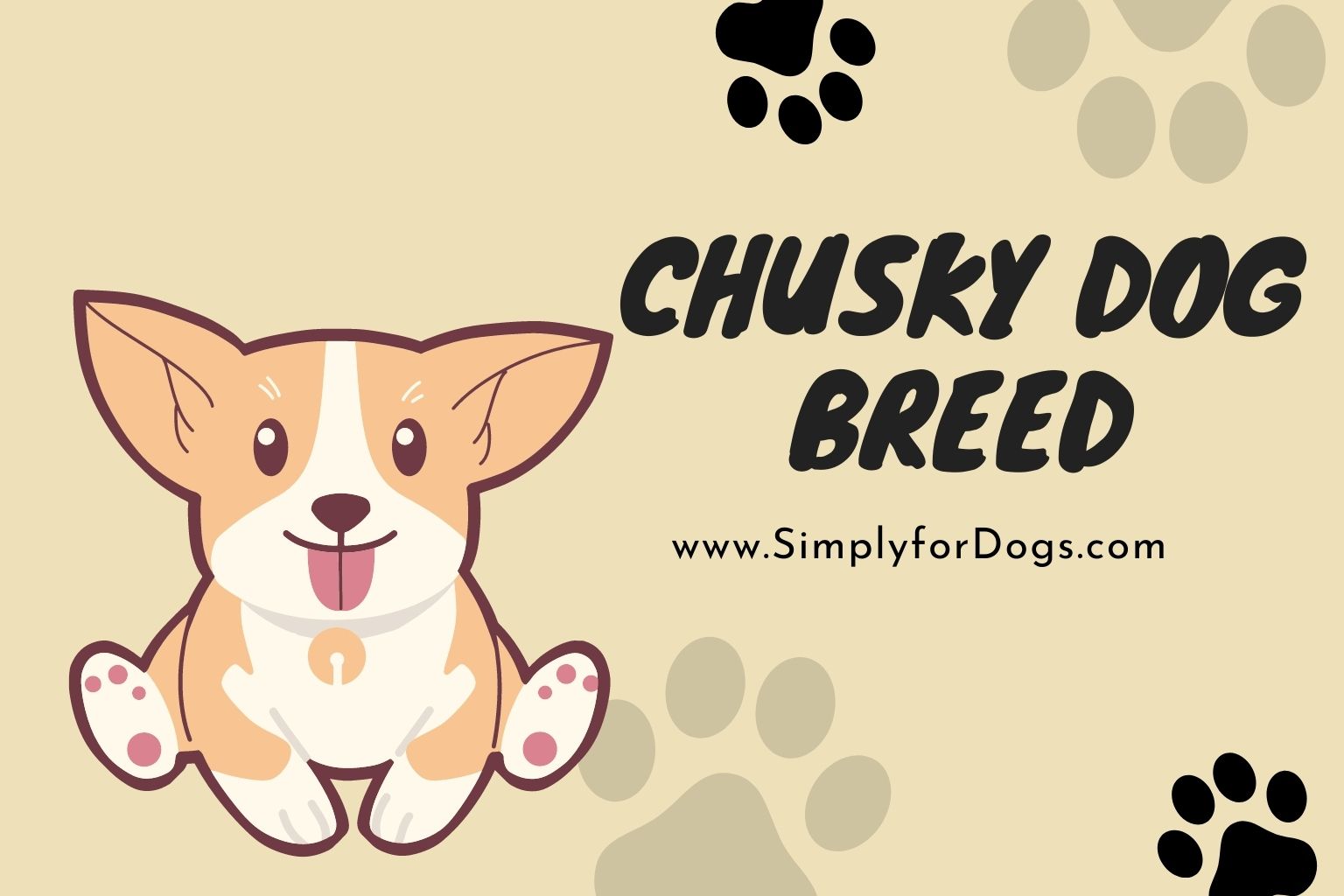 Are you up for a challenge, and love a dog that has a bit of attitude and a lot of physical substance? If that sounds like you, then the Chusky might be just what you’re looking for!

What is a Chusky? It’s actually not a breed in the truest sense of the word. It’s a mix of Chow Chow and Husky, and sometimes less commonly known as a Chowski, Husky Chow and Chow Husky. They’re fairly sizable dogs that also have sizable personalities, and they’re not right for every owner. However, if you have experience with dogs, and you’re comfortable being the alpha in the human/canine relationship, you might find the Chusky to be very much to your liking.

As just stated, Chuskies can be a bit of a challenge. They’re beyond intelligent, and they can be stubborn. They’re also highly protective, and in the hands of the wrong owner, could be aggressive. If a Chusky speaks to your heart, you’re going to have to commit to regular, vigorous training. Chuskies also require a lot of exercises, so if your idea of the perfect dog is one that just wants to cuddle up with you (although Chuskies will definitely do that!), then it would be best if you consider another breed or breed mix.

Chuskies come in a variety of colors, including white, black, cream, brown and red, and can be solid-colored or a mix. They’re fluffy and double-coated, so they might not be ideal for people who have allergies to dog hair.

As to history, Chuskies have probably existed for quite some time, usually due to accidental breedings. Recently, though, Chuskies have been intentionally bred. They’re fairly new, though, In the pantheon of designer breeds, dating back only to the early 2000s. Some designer breeds, like the Cockapoo, for instance, have been around since the 1970s, so by comparison, the Chusky is definitely the “new kid on the block.”

So, why the Chusky? Why this particular mix? The intentional breeding of Chuskies was probably due to the size of the parent breeds, along with the intelligence. Additionally, it’s known that when dog breeds are crossed, many of the health problems that plague the parent breeds are “bred out.” Chuskies are generally healthy, although they may be prone to issues like hip dysplasia (common in many large breeds and mixes), entropion and cataracts.

It’s worth mentioning, in terms of health, that Chuskies are sometimes born missing teeth. It’s not really known why this is the case since it’s not typically a problem with either the Husky or the Chow Chow (usually more common in Dobermans and Collies), but what it does mean that the teeth they have remaining need to be properly cared for, so daily brushing is recommended. Some breeds and breed mixes get along just fine having their teeth brushed only once a week, but the Chusky is an exception. Regular oral care is essential with Chuskies – since they sometimes have fewer teeth than other dog breeds and mixes, it’s very important to take care of the teeth that they DO have.

Chuskies are high-energy dogs and ideal for athletic owners. They thrive on at least one hour-long walk per day, with a lot of shorter walks and play sessions mixed in. They also love to run, and will happily tag along with you if you enjoy cycling.

Being active dogs, Chuskies require a diet formulated for high-energy breeds and breed mixes. This is a breed mix that can be free-fed if you like – free feeding simply involves buying a bag of dog food, dumping it into a basin, and telling your dog, “Have at it.” Unless your dog is a “recreational eater,” he’ll most likely just eat whatever he needs, because you’re not making mealtime an “event.”

On the other hand, though, if Chuskies are overfed, they do have a tendency to pile on the weight. Most of the time, this isn’t due to grazing in the food bucket. More often than not, it’s due to too many treats. By all means, use treats as rewards and training aids, but keep them low-cal, and remember that much of the time, a dog will be just as happy with a bit of cooked carrot or green bean as he will with a high-calorie treat. Finally, if you’re in any doubt as to how much your Chusky should be eating, ask your veterinarian for a recommendation.

Chusky puppies are very intelligent and highly trainable but need to be trained early on. Since a Chusky is going to be a sizable dog, it’s far better to begin training when you’re physically able to handle the dog, not later on when he’s untrained, on lead, and able to yank you all over the place.

The procedure for training a Chusky puppy is the same as it is for any other dog – start with the basic commands, like sit, stay, down, and come. I’m not going to bother going into specific training techniques here, as you can get them just about anywhere online. You can also enroll your Chusky puppy in local obedience classes where he can hang out with other dogs and humans, thereby working on socialization and obedience at the same time.

On the matter of socialization, by the way, it’s vital. You’ll want to expose your Chusky puppy to all kinds of different humans, situations, and other animals if you expect him to become a good canine citizen. So take him places. Take him to the animal hospital to get weighed – they won’t charge you for that, and they’ll probably greed him with cuddles and treats. Take him to the mall when you go shopping, and wait for people to come up to you and ask what kind of dog you have. Once his shots are fully up to date, take him to the dog park so that he can socialize with other dogs and humans. You get the idea.

How much is a Chusky? Usually, you can expect to pay between $200 and $800. Why so little for a Chusky, when other designer breeds cost so much? It’s because right now, Chuskies aren’t all that popular, so it’s supply and demand. If you think a Chusky is a right mix for you, it’s a buyer’s market right now.

Even though Chuskies aren’t all that much in demand, there are still more than a few bad people trying to make money on just about any designer dog trend, and it’s no different with Chuskies. There are people out there operating puppy mills, breeding dogs in horrible conditions without any consideration for the well-being of the dogs, just looking to make a fast buck. Usually, they’re breeding small dog mixes, but that’s not always the case, so if you’re looking for a Chusky, watch out for bad breeders. According to the America Kennel Club, if you’re looking online to buy a puppy of any breed or breed mix there’s an 80% chance that you’re going to find a puppy mill or a scammer. Watch for red flags – sellers wanting you to buy a puppy sight, unseen sellers, asking you to pay using gift cars or wire transfers, and pictures of puppies that appear on more than one website. It’s easy to get taken, so be careful.

Breed of the Week: The Siberian Husky (Video)
Is a German Shepherd Husky Mix Puppy Right for Your Family? (Video)
Happy Harold, the Humpy Husky

See above. There are good breeders out there, who have looked at the Chow Chow and the Husky, and said to themselves, “There’s something worth doing here.” There are also people who care little or nothing for the dogs and want nothing more than to make money. It’s up to you to learn the difference.

A bad breeder, of any dog breed or mix, is going to do all that they can to keep you away from the parent dogs and the litter. They will probably suggest that you meet them in a parking lot to pick up your puppy. Prior to the sale, they will ask you no questions. They won’t want to know who you are, who your veterinarian is, what kind of living accommodations you have, whether you have a fenced-in yard for the dog, and so on. A good breeder is going to want to have answers to all these questions, and more.

A good breeder will demand answers to many questions. Expect to be grilled. If you’re not grilled, chances are you’re dealing with a bad breeder.

As previously suggested, Chuskies can be difficult. They’re smart, but a bit on the stubborn side, and do best with an owner that has experience with large, temperamental dogs.

Chow Chows have a high level of aggression and a strong prey drive. Huskies also have a strong prey drive. Combined in the Chusky, this can lead to problems. Chuskies are not typically good with other animals, and could even view small children as prey. Therefore, they are best placed in families with older kids, and best not placed in homes where there are smaller dogs, cats, and other small animals.

The good side here is that Chuskies are outstanding guard dogs – they’ll bark to let you know if someone is intruding, and they’ll protect you with their lives.

Chuskies have heavy, double coats and consequently, they shed a lot. They require regular, vigorous grooming and brushing on a daily basis. Because their coats are so heavy they don’t typically do well in hot weather.

Chuskies are typically on the upper end of medium-size dogs and considered to be a bit on the lower end of large dogs, weighing anywhere from 40 to 60 pounds, and standing 18 to 23 inches. They are very solidly built, too, and can be a lot stronger than you might think.

As the Chusky is a relatively new mixed breed, there are few standards when it comes to size. That said, as a mix between Siberian Husky and Chow Chow parents, you can expect Chuskies to be on the medium to large side.

Most weigh in between 40 and 65 pounds and range in height from 18 to 23 inches at the shoulder. That said some may be larger or smaller.

1. How long do Chow Huskies live?

Chuskies are actually among the most long-lived large breed dogs, typically enjoying a lifespan of 12 to 15 years.

Oh, you bet they do! They’ll shed year-round and also blow their coats twice a year. If you have allergies to dog hair, the Chusky might not be the right breed mix for you.

Most dogs are good, if properly trained and socialized, and the Chusky is no exception.

So, what do you think? Is the Chusky the right breed mix for you? If you’re athletic and love to play with your puppy, then there’s a very good chance that you’ll do well with a Chusky. If you think that the best thing in the whole world is crashing in front of the television at the end of your workday, though, you might want to consider another breed or breed mix. It’s up to you.

Breed of the Week: The Siberian Husky (Video)
Is a German Shepherd Husky Mix Puppy Right for Your Family? (Video)
Happy Harold, the Humpy Husky