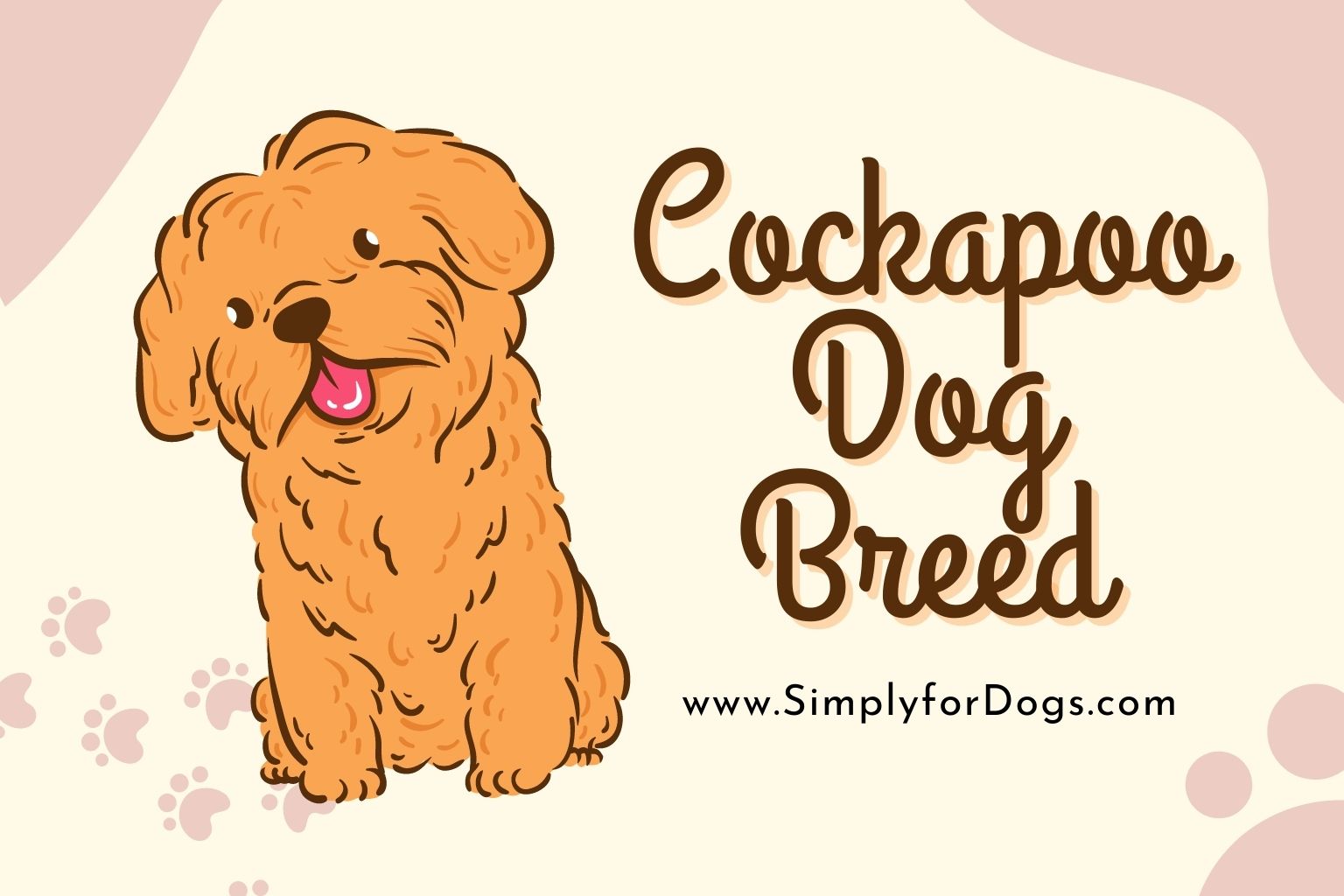 If you’d love to have a small dog with a high level of intelligence and a fun-loving personality, keep reading. A Cockapoo might be just what you’re looking for!

There have always been crossbreed dogs, but before the 1960s a litter of hybrids would most often be greeted with a heartfelt “Oops!” on the part of the owners. Cockapoos actually enjoy the distinction of being the first “designer dogs” that were deliberately bred. What is a Cockapoo? It’s a mix between a Cocker Spaniel and a Poodle.

So why would anyone want to take two perfectly good purebred dogs, and mate them in order to create a litter of puppies that, not all that long ago, would have been considered to have little or no value, and either given away or sold for a very small price? It’s because Cockapoos actually embody the best of both parent breeds. They have the sweet temperament that the Cocker Spaniel used to have, before too many breeders jumped on the bandwagon following the popularity of the Disney movie, Lady and the Tramp. They also have the Poodle’s intelligence and devotion. They’re bred for temperament and health more than for appearance, although most Cockapoos are indisputably cute!

Most often, the Cocker Spaniel in the mix is an American Cocker, but there are crosses between English Cocker Spaniels and Poodles – these dogs are generally known as “Spoodles.” Either Cocker, when crossed with a Poodle, will yield a litter of very pleasing puppies, but only the American cross is a true Cockapoo.

Cockapoo puppies are affectionate and highly trainable, but as is the case with every breed or breed mix, they require early socialization. Take your Cockapoo puppy places, like the mall, the dog park (once his shots are fully up to date), and to doggie daycare – in short, anywhere that he can meet people and other dogs.

As to house training, Cockapoo puppies do tend to make it easy. They’ll quickly get the idea that you want them to do their business outside. Remember, though, that they have tiny little bladders, and might not always be able to hold it in. Take your Cockapoo puppy outside first thing in the morning, last thing at night, and a couple of hours after every feeding or watering. Don’t punish you Cockapoo puppy if he gets it wrong – remember that he’s just a baby, and babies make mistakes! If accidents happen (and they will happen) just clean up the mess and move on – don’t make a big deal out of it.

When choosing your Cockapoo puppy, make sure to observe how he behaves with the rest of the litter. When the breeding works the way it’s supposed to, puppies end up with the spirited nature of the Poodle along with the loving nature of the Cocker Spaniel. When it doesn’t work, you end up with neurotic little fear biters, so observe closely how the puppies interact with one another.

If you’re looking for a Cockapoo, you’ll find a lot of “for sale” ads online. You need to tread very, very carefully because according to the American Kennel Club (AKC), at least 80% of these ads are scams. Sometimes, there are no puppies, just pictures of puppies that might show up on any number of websites. Nobody you can call, nobody who wants to talk with you, nobody who actually has a puppy for sale. Just a scammer.

If you’re looking for Cockapoo breeders with puppies for sale, you’re better off to look locally – there are tons of people breeding Cockapoos, so you really shouldn’t have to venture out of your own area to find a Cockapoo for sale.

When looking for a Cockapoo for sale, it’s vital that you check out the breeder. There are good breeders and bad breeders, and fortunately, it’s easy to separate the two. A good breeder wants you to visit the kennel, see the litter, visit the parents (or at least the mother, if the stud is off-site). Good breeders are also going to ask you a lot of questions because they care very much about where their puppies end up – if you feel like you’re being grilled, you probably are, but don’t take it personally.

It’s also very important when looking for Cockapoo breeders, to make sure that you’re not dealing with a puppy mill. If you’re buying a puppy from a pet shop, there’s a very good chance you’re dealing with a puppy mill – an irresponsible breeder that cares nothing about what happens to the puppies out of their litters. Even so-called “reputable” pet shops – the ones whose names you’ll recognize – buy puppies from irresponsible breeders and care nothing about what happens to the puppies after they’re sold. If you buy a puppy from one of these pet shops, and something goes wrong, you will have no recourse. You could end up with a puppy that has serious health problems, and that could bankrupt you with veterinary bills, and that’s all you’ll get because the pet store will not compensate you in any way for the expenses you’ve incurred.

Any dog can end up in a rescue facility, and most dogs end up there through no fault of their own. It’s not often that a Cockapoo will be found in a rescue facility, but sometimes things happen – owners die, or grow old and have to go into assisted living accommodations that don’t accept dogs. Personally, I’d rather be old and decrepit and unable to look after myself and living on the street with my dogs rather than give them up, but hey, that’s just me.

If you do find a Cockapoo rescue, keep in mind that he will almost always be traumatized – either by losing his life’s companion, or, more horribly, due to being neglected or abused. He will need special care, and it might take a long time before he fully trusts you. He might never be the cuddly little friend you want, depending on how bad the trauma was. Even if he never fully warms up to you, though, you can expect some level of gratitude on his part. Work with what you have, and love him.

It’s hard to determine how long a dog is likely to live. We’ve all heard stories, for instance, of Rottweilers that have lived for 16 years, when the average lifespan for the breed is 9 years. Then there’s the case of a friend of mine who had a Shih Tzu die at age 7, of natural causes, when the normal lifespan for the breed is anywhere from 9 to 16 years. Sometimes, it’s just the luck of the draw.

One thing to keep in mind, though, when you’re considering potential Cockapoo lifespan, is the concept of hybrid vigor. What this means is simply that when there is new blood brought into the breeding, health issues are often “bred out.”

Sadly, the Cockapoo might be less likely than other mixes to benefit from hybrid vigor. This is because Cockapoos have been bred for about 50 years, and there isn’t that much “new blood” being brought into the mix – the breeding pool has been essentially the same for quite a while, and unless there are new dogs brought in from unrelated lines, the puppies will not benefit from hybrid vigor.

That said, though, Cockapoos are still among the longer-lived crosses. How long do Cockapoos live? Generally speaking, anywhere from 14-18 years.

A Toy Cockapoo is, quite simply, a Toy Poodle bred to a Cocker spaniel. A Toy Cockapoo will weigh a bit under 12 pounds, and stand no more than 10 inches. There are other mixes, like the Miniature Cockapoo (Miniature Poodle bred to Cocker Spaniel) and the Maxi (or Standard) Cockapoo which is a Cocker Spaniel/Standard Poodle cross. The Mini can weigh up to 18 pounds and stand up to 18 inches. The Maxi weighs more than 19 pounds and stands at least 15 inches.

There’s also a Teacup Toy Cockapoo (under 6 pounds and shorter than 10 inches), but please avoid this mix. Teacup dogs are freaks – bred to be abnormally small, and they often have serious health conditions. You don’t want anything with Teacup in the mix unless your idea of fun is visiting the vet over and over because of horrible health conditions resulting from really bad breeding.

Are Cockapoos hypoallergenic? No. Is there really any such thing as a hypoallergenic dog? No. But the Cockapoo comes close. Thanks to the poodle in the mix, Cockapoos don’t shed much, and they have little dander.

How Long do Cockapoos Live?

A Cockapoo that is properly cared for and has regular veterinary visits will usually enjoy a very long life. How long do Cockapoos live? Usually anywhere from 12 to 15 years.

Do cockapoos bark a lot?

For a small breed, Cockapoos aren’t particularly yappy. They tend to take on the quiet nature of the Cocker Spaniel, andthis makes them very good apartment dogs!

These loving little dogs make very good pets for almost any owner. They’re cordial with just about anyone, and they’re usually good with children. They are also typically good with other animals.

How much is a Cockapoo puppy?

The price can vary a great deal. Usually, on average, a Cockapoo puppy will cost around $900. You could expect to pay as much as $2,500, although personally, I find that excessive.

Yes, they do. They do it with their noses, LOL! Okay, seriously, if you’re asking about the stench, Cockapoos are typically very clean dogs that don’t emit a whole lot of odor.

Can a Cockapoo be left alone?

It’s not generally a good idea. Cockapoos want nothing more than to be with their humans and can be prone to separation anxiety if left alone for long periods.

Do Cockapoos need a lot of exercise?

Cockapoos are active but generally do just fine on about half an hour of exercise per day.

Is a cockapoo a good first dog?

Yes. These little guys are very trainable, not at all dominant, and a great choice for first-time dog owners.

Are carrots good for dogs?

Is a Cockapoo a recognized breed?

No, a Cockapoo is a cross, and not recognized by the American Kennel Club.

Should I get a male or female Cockapoo?

It really doesn’t matter. Some people prefer females. Others gravitate toward males. Choose the Cockapoo puppy that speaks to your heart.

Of course! Any dog can breed with any other type of dog. Most breeders cross Poodles with Cocker Spaniels rather than Cockapoo to Cockapoo, but that doesn’t mean that it can’t be done. Dog DNA plus dog DNA equals dog, no matter what the breed or breed mix.

Cockapoos are delightful little bundles of energy and have a very affectionate nature. They’re ideal for first-time dog owners and fit well into almost any family. If you’re looking for a loyal companion that will provide you with many happy years, the Cockapoo could be an ideal choice.