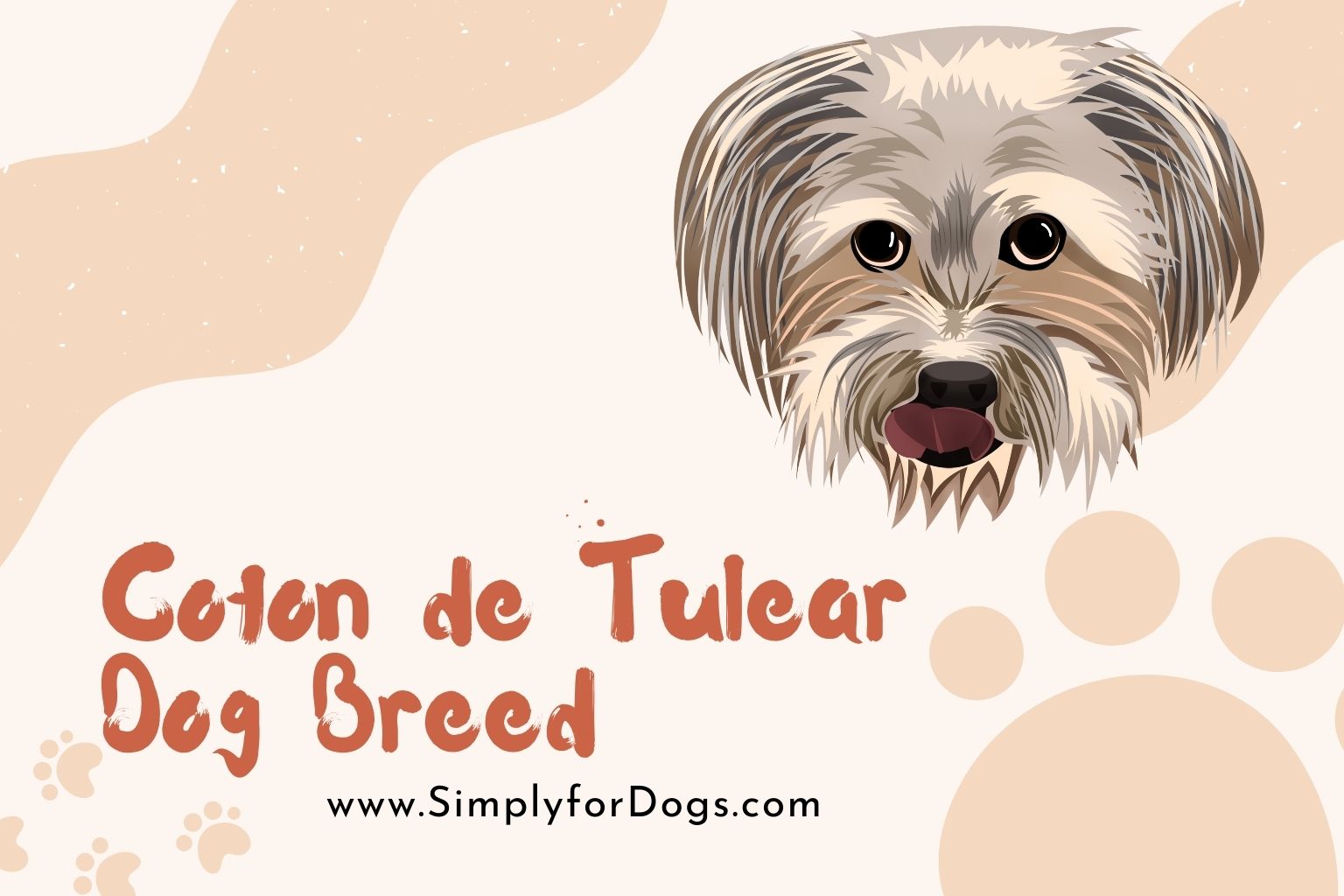 Would you love to have an adorable little dog with a personality that’s every bit as appealing as his looks? The Coton de Tulear may be just what you’re looking for! Keep reading to learn more about this endearing dog breed.

Most dog breeds that today are considered pets have their origin in some sort of work – hunting vermin or small game, herding hauling carts, driving livestock to market, guarding travelers and so on. The Coton de Tulear, however, has never been bred to be anything other than a companion and that’s the role he continues to fill.

The Coton is a very sociable, intelligent dog that fits well into almost any family. He wants nothing more than to please his humans and does well in families with children, as well as with retirees and shut-ins. The only home environment in which a Coton is not going to thrive is one in which humans are absent for much of the day.

The Coton de Tulear (pronunciation is co-tawn-day-tool-yay, with accents on the second and fourth syllables) earns his name from his cottony coat as well as from the city formerly known as Tulear, and now called Toliara, located on the island of Madagascar. It’s believed that Cotons came to Madagascar hundreds of years ago, accompanying ladies on lengthy, boring voyages. They may also have ended up on the island as the result of a shipwreck in which the little dogs were the only ones to survive. Either way, they soon became established, with some finding their way to wealthy owners. Others, sadly, ended up on the streets.

It’s also interesting to note that many dog breeds found their way to other continents and countries as recently as the 18th century, but it took the Coton de Tulear until the 1970s to find their way off the island of Madagascar, when a French citizen brought a few with him to France and began breeding. It was also in the 1970s that Cotons found their way to North America.

Despite the popularity of the Coton de Tulear, the breed has not yet been AKC-recognized. He is, however, registered with the FSS (Foundation Stock Service) for the AKC.

Coton de Tulears are generally healthy but can be prone to some conditions. They are not widespread and there’s a very good chance that your Coton will never experience any of these issues. They’re just things to keep in mind and are as follows:

Again, these are not things that you need to obsess over. Generally speaking, Cotons are healthy dogs.

Cotons are also very trainable. Sometimes potty training can be a bit problematic, but that’s the case with all small dogs. They have small bladders and need to go out often. Ideally, you should take your Coton outside first thing in the morning and the last thing at night, and about half an hour after each meal.

Speaking of meals, you can free feed a Coton if you like – they’re not gluttons, and will usually eat only as much as they need. If you choose to feed on a schedule, though, give about three-quarters of a cup of quality dog food twice a day. If you’re in doubt as to how much to feed yourCoton, consult your veterinarian.

If you’re not sure that your Coton is getting enough (or is getting too much) to eat, take a look at him while you’re standing above him. You should see a discernible waist, but his ribs should not be apparent. Next, put your hands on your Coton’s back and run your hands along his spine. You should be able to feel the ribs, but not see them. You also shouldn’t have to press overly hard to feel the ribs.

Coton de Tulear puppies are pretty much the same as all other puppies in that they’re affectionate and playful, and need to be properly trained and socialized. With a Coton, the socialization is beyond easy – they’ve been bred for centuries to be companions to humans, and a lot of their social skills are hard-wired. Still, it’s wise to take your Coton puppy places with you, where he can meet other people and dogs, and learn how to interact effectively with both.

You can find socialization opportunities everywhere – take your Coton to the mall and hang out in the parking lot. Enroll him in doggie daycare. Take him to obedience classes where he can learn basic training and also meet other people and dogs. You get the idea.

Cotons are a lot luckier than many other breeds in that they don’t often end up in rescue facilities. This could be for a couple of reasons. One, Cotons are expensive (see the section on price) and a lot of people, having made a huge investment, choose to stay the course rather than give up what is a pretty pricey dog.

For another, Cotons are hardly ever prone to aggression, which is another main reason why people give up dogs. Instead, I might point out, of doing the right thing and taking some time to train or invest in professional training. I don’t think any dog should ever be “thrown away,” but fortunately for the Coton, it hardly ever happens.

Group Spotlight: The Non-Sporting Group and 5 Dogs You Might Not Know from It
Why Do People Have Weddings for Their Dogs?
Your Best Bichon Frise Foods

Sometimes, Google is NOT your friend. If you’re Googling “Coton de Tulear Breeders,” you’re going to find any number of scam sites. In other words, people who want you to believe that they have Coton puppies for sale, but who are just out there to take your money for a puppy that probably doesn’t even exist.

If you’re looking for Coton de Tulear breeders, your best source is local breed clubs or AKC’s marketplace. As of the time of this writing (February 2020), the AKC has listings for 56 legitimate breeders.

Cotons can be pretty expensive. The average price for a Coton de Tulear puppy is $1,000. If you’re buying a puppy that has an outstanding pedigree and superior bloodlines, you could pay anywhere from $2,200 to $10.000.

Cotonde Tulears are long-haired dogs but still considered to be relatively hypoallergenic. There is no such thing as a truly hypoallergenic dog since any amount of dog hair can provoke an allergic reaction in people that are sensitive to pet hair and dander. People with mild to moderate allergies, though, typically do well with Cotons.

Cotons are typically cheerful little dogs who want to please their humans and spend time with them. If you want a guard dog, forget the Coton – these little guys will welcome a burglar into your home, show them where you keep your valuables, shower them in kisses, and if you come home in the middle of the burglary, your Coton will greet you happily, and inform you with wags and smiles, that they have a new best friend!

In short, Cotons pretty much love everyone, even those who are completely unworthy.

Cotons are usually good with other dogs, but you may find, if you’re a multiple dog household, that your female Cotons run roughshod over the males. All I can say here is, “Bitches be like….”

Cotons are also very goodwith children, but it’s important that children also be good with them. No dog likes to be manhandled, have his ears and tail pulled, be knocked around and generally abused by children. Cotons will typically tolerate a lot more abuse than other breeds, but they do have their limits, and besides, why should any dog have to tolerate that kind of behavior? Train your kids as well as your dog, and you’ll have no problems.

A Coton de Tulear that enjoys a healthy diet and a bit of exercise can be expected to live for14-16 years.

Coton de Tulears have beautiful, long coats that are soft and fluffy. Usually, the coat is white, but it could have shadings of other colors. Cotons don’t shed much and require little in the way of bathing.  Because the hair is long, it can be prone to matting, though, so it’s a good idea to brush a few times a week with a pin brush. Just keep an eye on your Coton, and brush him when he seems to need it.

What’s more important than brushing is nail trimming. Because Cotons are often companions to people who don’t get out a lot, their nails don’t typically get worn down during regular exercise. If this is the case, a trimming every couple of weeks is usually needed.

They are very smart and very trainable. They love to learn, and they’ll happily hang out with you all day while you show them new things, like sit and stay and come. Every time a Coton learns something new, he’ll be so proud of himself! You’ll be proud too!

Can a Coton de Tulear be left alone?

No. No dog should ever be left alone, and Cotons even less so. They’re bred to be companion dogs and can suffer from depression and separation anxiety if left alone for long periods.

No. It’s not cruel unless you leave your dog in the crate for ridiculous amounts of time simply because you can’t be bothered spending time with him. Many dogs love their crates – the crate is their place where they feel safe. They get to be in there and nap, and play with their toys,, and feel as though they have their own place within the household – the one place that belongs to them and nobody else.

Can I leave my dog alone for 12 hours?

Well, technically, you CAN, but if you DO, you’re an asshole. No dog should ever be left without human companionship for 12 hours.

How long can you leave a dog alone legally?

There’s not much law when it comes to this. The general thinking, though, is that a puppy should not be left alone for more than 2 hours, and an adult dog for no more than 4-6 hours.

Most small dogs have a propensity to be barky, and the Coton is no exception.

What breed of dog has the loudest bark?

While they’re not exactly avid swimmers, many Cotons do seem to like the water.

What is the difference between a Havanese and Coton de Tulear?

There’s not a lot of difference. The Havanese is a little smaller than the Coton.

What breed is Barbra Streisand’s dog?

You’re reading this article, aren’t you? What do you think?

Group Spotlight: The Non-Sporting Group and 5 Dogs You Might Not Know from It
Why Do People Have Weddings for Their Dogs?
Your Best Bichon Frise Foods