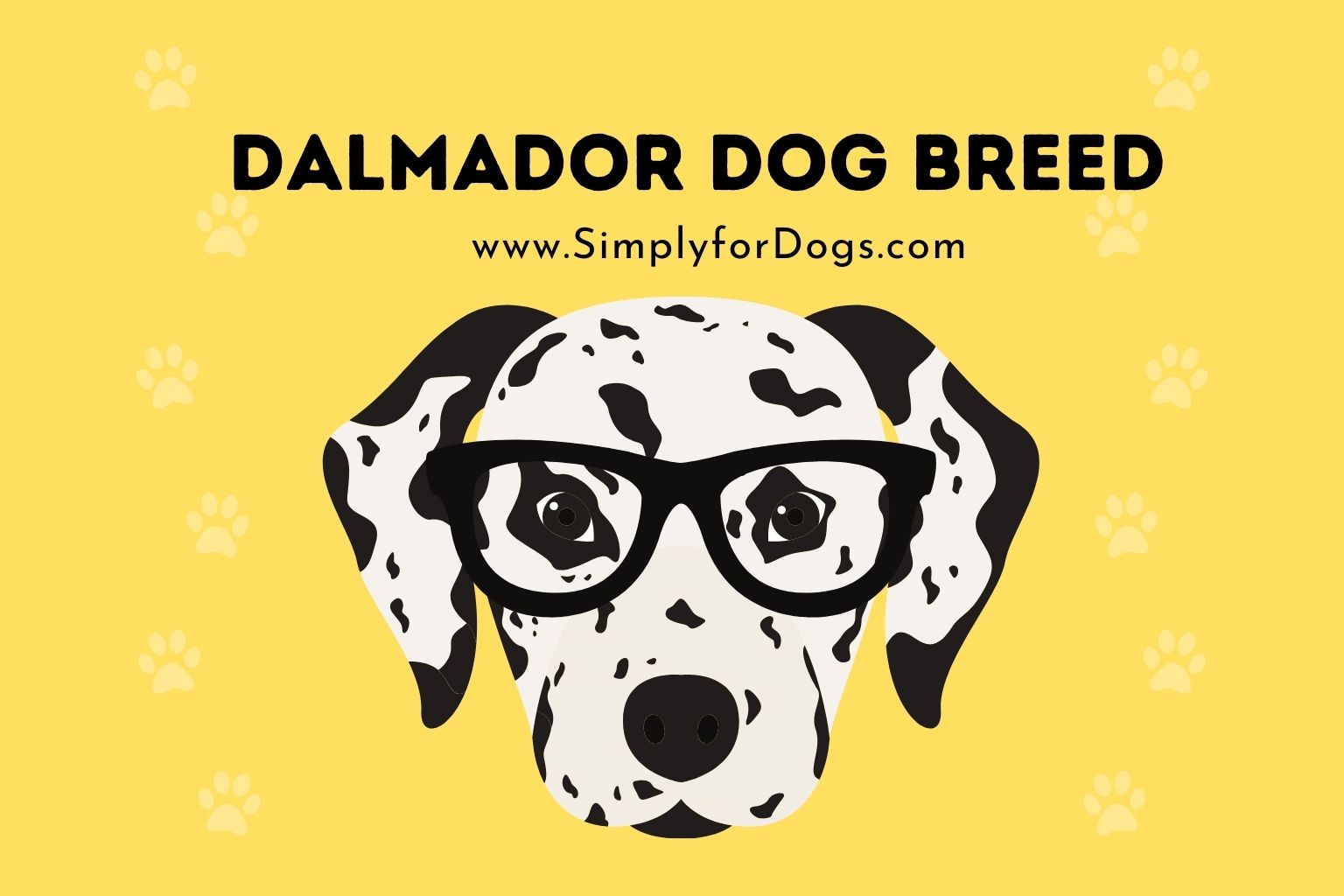 If you’re familiar at all with designer dog breeds, you probably most often think of the “little guys” – the Chorkies, Maltipoos, Doxihuahuas and so on.  However, there are hybrids for those of us who like our dogs a bit on the larger side, and one of the most pleasing crosses is the Dalmador. Keep reading to learn more about this hybrid for those of us who appreciate puppers that are “up-sized.”

What is a Dalmador? It’s a cross of two highly popular breeds, the Dalmatian and the Labrador Retriever. It’s not really known when Dalmadors became widely known, but most likely they originated in the same way as other designer breeds – by accident. In other words, somebody had a Dalmatian, and somebody else had a Lab, and OOPS! The breeding wasn’t likely planned, but the parties involved looked at the resulting litter of puppies and said something along the lines of “Hey, this isn’t necessarily a bad thing!”

The American Kennel Club (AKC) would, of course, beg to differ. The AKC does not consider crossbred dogs to be desirable (and if I’m going to be completely honest here, in most cases I agree with the AKC – but then, I’m an unapologetic dog breed snob). Because the Dalmador is not a purebred dog, the AKC doesn’t recognize it, although it is recognized by the Designer Breed Registry.

What about the parent breeds, though? They’re most definitely AKC-recognized. The Labrador is a relatively old breed, originating in the Canadian province of Newfoundland, where he helped fishermen with their tasks. The Dalmatian has been known for centuries, primarily as a “firehouse dog,” serving as a mascot in fire stations and even frequently helping to rescue humans from burning buildings. The Dalmador embodies everything that is good about both parent breeds (more on this in the section on temperament).

Dalmadors are classified as medium-size to large-size, high-energy dogs that require quite a bit of exercise. In fact, if you’re a couch potato the Dalmador may not be the right dog for you. On the other hand, if you’re comfortable with half an hour to an hour of vigorous exercise each day, you may have found your best buddy in the Dalmador.

Because of the Dalmador’s high energy level, it’s important that you feed him a dog food that specifically formulated for active dogs, and that you make sure he gets enough food – ideally, at least 3 cups per day, and more if he’s very athletic. Make sure, when choosing food, that the first ingredient on the list is meat, and that it’s from pure sources – not by-products!

As to the frequency of feeding, you have a couple of options. Personally, I’m a big fan of free feeding, provided that it’s started early, in the puppy stage. The idea behind free feeding is that if left to his own devices, a dog will eat no more nor less than what he actually needs. Mealtime isn’t an event, an occasion, a party, the highlight of the day, better than a visit to Disney World… okay, I know, I’m going on and on, but you get the idea. Food is just food, not a cause for celebration.

That said, sometimes Labrador Retrievers are what’s known as “recreational eaters.” In other words, they’ll eat beyond the point that they’re full, just for the pure pleasure of eating. You probably know people who are like that. If your Dalmador seems inclined to want to eat for pleasure, you might not want to free feed. Instead, give him a cup or so of dog food, spread over three meals per day. Keep an eye on him to make sure he doesn’t put on too much weight. If you think he might be getting too fat, stand behind him and run your hands over his body, starting at the head and working down toward the tail. You should be able to feel a waist as you move down, but not too much in the way of ribs. If you have to poke and prod to find his ribs, he’s too fat. If you can feel the ribs without applying any pressure at all, he’s too thin. Adjust the amount you’re feeding accordingly.

As to health problems, there really aren’t all that many when it comes to the Dalmador. Much of the time, when breeds are crossed, the health issues that plague the parents are “bred out. One thing that’s worth noting, though, is that both Labs and Dalmatians can suffer from elbow dysplasia and hip dysplasia. This is also very common with other large breeds.

Dalmatians are also prone to deafness. This is something that could also be bred out in the Dalmador, but if you want to err on the side of caution (as I would), there is a test called BAER (Brainstem Auditory Evoked Response). This can be done on Dalmador puppies as young as five weeks. Dogs that test positive for deafness on the BAER scale can also be prone to joint issues.

Your Dalmador may never suffer from any of the health problems that are common to the parent breeds. For that matter, most of the dogs in the parent breeds will also emerge unscathed from any of these issues. They’re just things to keep in mind, in the same way, for instance, that you might get regular colorectal scans if there’s a history of bowel cancer in your family. It doesn’t mean that it’s going to happen; it just means that you need to know that the risk is elevated just a bit.

Have you ever seen a litter of Rottweilers? Bichon Frises? Malteses? They’re all going to look pretty much the same. In fact, if you were to choose a puppy out of one of those breeds, and the breeder handed you a puppy not of your choosing, chances are you’d never know the difference. They all look the same. It’s different with Dalmadors. There can be so much variation, even within a single litter.

You could end up with a black dog with a white chest, a dog that displays all of those fabulous Dalmatian spots, or one that’s a solid color. It’s luck of the draw.To get an idea of what might happen when Dalmatians and Labradors breed, click here.

Most of the time, when dogs end up in rescue facilities, it’s not their fault. Some breeds and breed mixes, though, end up needing to be rescued more than others, and Dalmatian mixes are, sadly, very likely to end up in dire straits. I put this down in a large way to the influence of Hollywood. A couple of decades ago, Disney did a live-action remake of their classic film,

101 Dalmatians. What that meant is that everyone and their dog (sorry!) wanted a Dalmatian.

Now, fast forward to bad breeders, who thought, “Wow, these dogs are really popular, and I can make money! I don’t care about good breeding – I just have to get some dogs and breed the living snot out of them until the bottom falls out of the market!”

Fast forward again, and those dogs that were bred with no regard to health or temperament end up in rescue facilities.

Do you want to adopt a Dalmador dog rescue? If you do, then all I have to say is that I admire and respect you. But do you know what you’re getting into? A Dalmador rescue may have been very badly bred, and could have behavioral issues that you’re not prepared to deal with. If you’re not an experienced dog owner, a Dalmador dog rescue might not be a good choice. Tread carefully.

Th Dalmador is an odd thing, in that a dog of this mix will typically cost you a lot more than a purebred Dalmatian, or a purebred Labrador Retriever. It’s simple supply and demand, I suppose. People want designer dogs, and they’re willing to pay for them.

How much you’ll spend for a Dalmador will likely depend a lot on where you live. In areas where Dalmador breeders are common, you can probably expect to pay about $1,000. In areas there are few breeders of Dalmadors, it’s more likely to go up into the $1,250 range.

A Dalmador that has regular veterinary care, has his shots up to date, and is generally well cared for can be expected to live anywhere from 10 to 14 years. Sometimes, Dalmadors live even longer.

Dallmadors are dogs that are highly loyal and trusting. They make wonderful companion dogs. They’re also very protectivesince Dalmatians were originally intended to be watchdogs.

Dalmadors are not prone to separation anxiety, but by the same token, they don’t like being left alone. They want to be part of a family. If left alone for a long time, Dalmadors can become very bored and destructive. Given enough time with their human companions, Dalmadors can be friendly and cheerful, and highly responsive to training.

Dalmadors are easy to groom, generally inheriting the short cost of the Dalmatian or the medium coat of the Lab. They do shed a fair bit, but will do well with a vigorous brushing once a week. If they inherit a lot from the Lab, you can expect seasonal shedding – in other words, they’ll “blow their coats” twice a year.

As to bathing, it’s hardly ever necessary. Unless your Dalmador gets into something really, really nasty, there’s probably no need for bathing at all.

How big do Dalmadors get?

Dalmadors are medium to large dogs, and will generally weigh between 50 and 80 pounds, and stand anywhere from 19 to 24 inches.

Do Dalmatians have good temperament?

Generally, yes, but they’re not always tolerant of rough handling and may not be good with small children.

How do you tell if a Dalmatian is purebred?

It can be difficult, but generally speaking, you should look at the spots. They should be relatively evenly spaced, with no overly large spots.

They’re among the most intelligent dogs.

Can Dalmatians have brown spots?

Sometimes, Dalmatians can have spots that look brownish – they’re known as liver-colored. It’s not common, though.

They are, but sometimes they’re a bit too energetic to be around small kids. It’s not that they’re mean – it’s just that they’re boisterous, so they have to be supervised around children.

So, what do you think about the Dalmador? Is this the right dog for you? Kind and gentle, loyal and loving, and yet on the job when it comes to protecting his home and family. If this sounds like the kind of dog you want, then you could do a lot worse than the Dalmador.