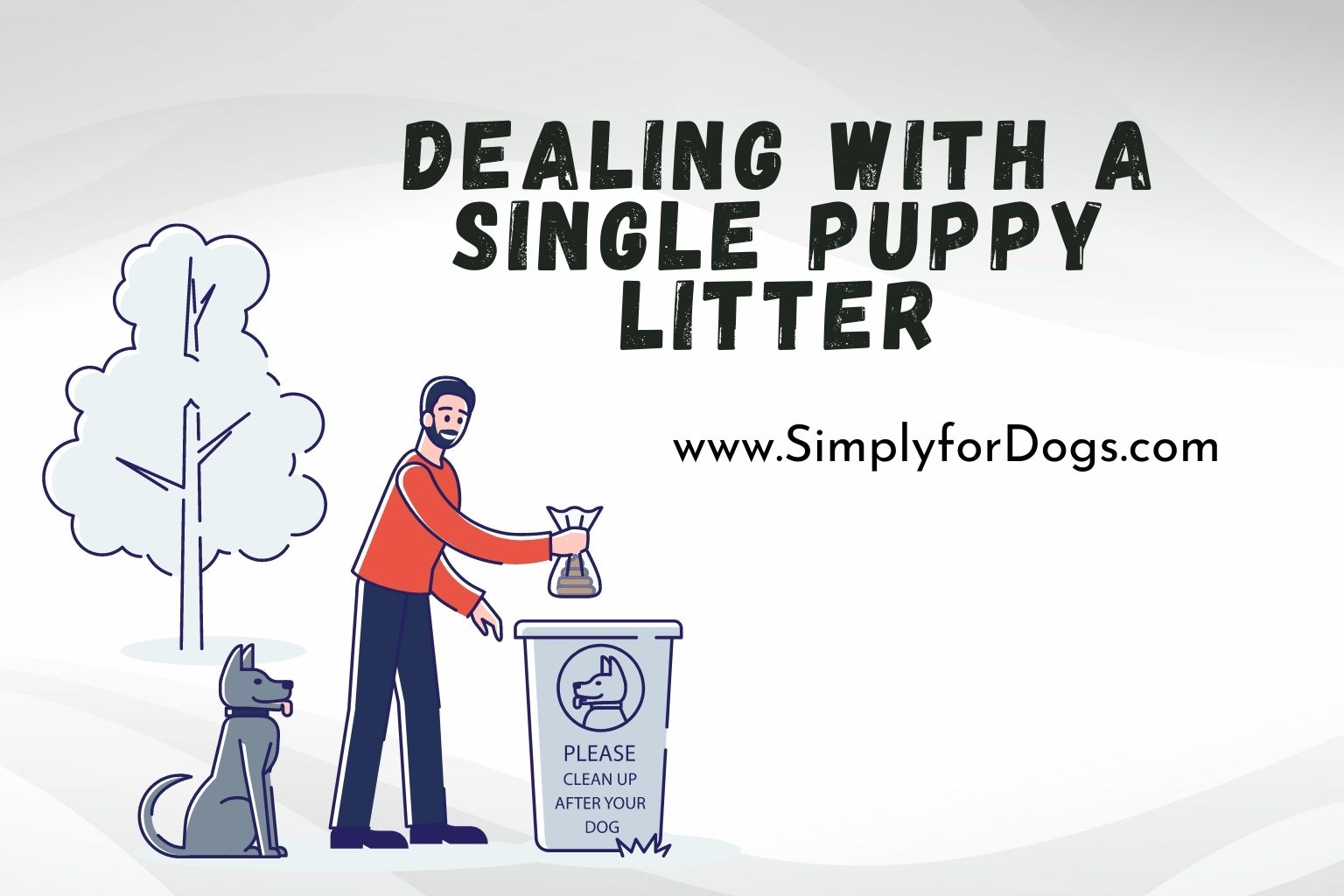 Do you know anyone who breeds dogs, and has had a litter consisting of just one puppy? I don’t, but it can happen. The reason it doesn’t happen all that often is that bitches are genetically and physically predisposed to deliver multiple puppies. The proof of this is pretty obvious – just look at the number of nipples a female dog has. A bitch usually has anywhere from eight to ten nipples, divided equally in rows, so that large numbers of puppies can nurse at any given time.

Further evidence that dogs are meant to have several puppies is in the size of the bitch’s uterus – it’s meant to hold a lot of puppies.

Now, consider that a bitch can be fertilized several times over the course of her heat, by more than one dog. Take all this together, and it’s pretty obvious that a single puppy litter isn’t typical. It’s an aberration, and when a single puppy litter occurs, it can lead to behavioral problems.

We’ll talk more about behavior issues in a bit. First, though, let’s take a look at one of one of the biggest (no pun intended) problems that can occur with a single puppy litter.

When a single puppy litter occurs, the one puppy that’s in the uterus has access to all the nutrition that comes from the mother, and none of the competition that comes from littermates. This can lead to a pretty big singleton. This might not lead to much difficulty when it occurs in a large breed, like, say an English Mastiff or a Saint Bernard, but if it occurs in a small breed, there could be significant problems with the delivery. In fact, the singleton might have to be born via C-section if it’s too big to pass naturally through the birth canal.

Now, with that out of the way, on to behavior.

Puppies Learn From Their Mom and Their Littermates

If you read my Breed of the Week posts, you know that I’m always talking about the importance of socialization. When you take a puppy into your home, it’s your responsibility to expose him to different people, settings and experiences. This is easier to do when a bitch and littermates have taken care of the early socialization. In other words, for the eight or so weeks before your puppy comes home, his mom and his siblings are teaching him how to be properly socialized with other dogs. Then, when you adopt him, you socialize him with people.

If your puppy hasn’t been with littermates, there’s only so much “dog socialization” the mother can achieve. So you’re going to have to work backward.

How do you do that?

Puppy Kindergarten and “Borrowing” a Litter

If your best buddy came from a single puppy litter, it’s going to be up to you to make sure that what couldn’t happen during the first eight weeks still happens. Enrolling your baby in puppy kindergarten can work to some extent to offset the absence of siblings, but there’s a better way – borrowing a litter.

Ideally, you’ll do this very early on and it’s just what it sounds like – you find somebody in your area whose dog has just had a litter, and you ask if they’ll foster your singleton. It really doesn’t matter if your little one is a Labrador and the mom of the other litter is a Chihuahua, or vice versa. Size doesn’t enter into it – age does. You want to find an environment for your singleton where he can be with others of his own age, and where the mother will clean him up and care for him.

If you absolutely can’t find a “foster” litter, then the best thing you can do, before your singleton is old enough for puppy kindergarten, is spend a lot of time with him. Clean him regularly the way his mom would – I don’t mean that you have to lick off urine and feces, just that you keep the pen clean. Provide a source of warmth, since the mom isn’t there to do it. And in the absence of littermates, provide some stuffed toys to mimic them.

So, You Got the Runt of the Litter (Video)
29 Fun and Useful Puppy Facts
5 Things to Do On Puppy’s First Day Home

It’s Not Just About Bonding

Another thing that puppies learn along with their littermates is how to respond to tactile stimulation. If you have a single puppy litter, it’s even more important than it might otherwise be for you to pick up the puppy regularly, snuggle with him, and get him used to handling. Usually, in a litter, puppies will push one another around, and at some point, the mother will also shove a puppy, just because she can, and because it’s something that he has to get used to in order to interact properly with other dogs.

Now, I’m not asking you to manhandle a puppy, but if you’re dealing with a singleton, he has to get used to all kinds of physical contact, and his littermates aren’t going to be there to make sure that happens. So handle him a lot – more than you would a puppy that was part of a litter.

The other thing to keep in mind is that when a puppy is part of a litter, he doesn’t always get things his own way. That’s not a bad thing – in fact, it’s how puppies learn self-control, and how to deal with frustration. So don’t pick up your singleton every time he whines, tempting as it may be. Give him attention once he calms down.

It’s not going to be easy dealing with a single puppy litter, but it can be done. You will have to work harder on socialization than you would with a typical litter, because in the early days, you will have to take on the role of the littermates. You’ll have to discourage growling and snapping while still being gentle, and you’ll have to make sure that your little one has, if not a substitute, then at least a reasonable replacement for littermates (which is where the stuffed toys come in). Then, you’ll also have to get the puppy used to being handled earlier than you ordinarily would.

Not having littermates can have an adverse effect on the singleton, and that’s why if you can find a foster litter, that’s the best course of action. If you can’t, though, consider puppy kindergarten early on. The singleton has to learn “how to be a dog.”

I would also suggest that if you have a bitch that has delivered a singleton, you should have her spayed. You’ve already gone through one set of problems, and you don’t need to repeat it.

Have you had a single puppy litter? How did it work out for you? Leave a comment!