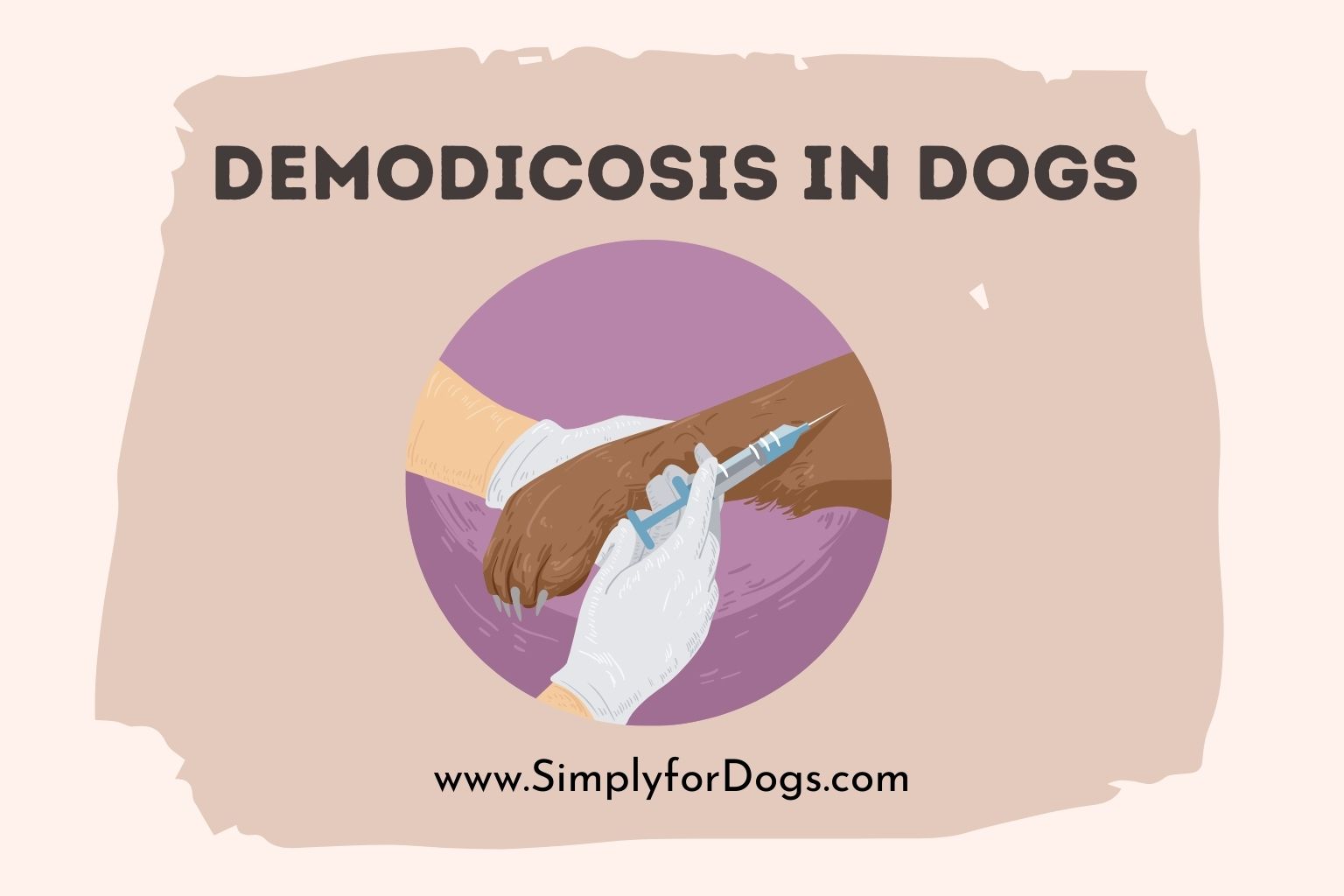 If you’ve never heard the term demodicosis, you probably know this condition by its more common name: mange. Mange is something that is usually associated with stray dogs, or dogs that are mistreated in abusive homes. They often present as dogs with patchy coats, red skin, thin or malnourished appearances, and other signs of illnesses. But do you know what mange really is?

This is a disease that dogs can get that does in fact cause them to have inflamed patches of red, balding skin. Unfortunately, mange is far more serious than just a little bit of hair loss, and can actually be life threatening. It is also just as common in beloved pets as it is in strays or abused pets because the primary known cause of mange isn’t what you think.

In this guide to demodicosis in dogs, we will cover everything you need to know about this condition, including:

But before we dive into those topics, let’s define what demodicosis is, and what types of this condition exist.

Technically classified as an inflammatory disease caused by mites on the skin, mange is actually a condition that impacts the immune system. The immune system gets overwhelmed trying to fight off the mites that are attacking the skin, and that results in a very sick dog. This state allows the mites to reproduce very quickly, which then causes the mange. The compromised immune system then cannot fight off other illnesses, which is what makes this disease potentially worrying.

Humans can develop a similar disease, but the specific species of mites that are destroying the skin in human demodicosis is not the same as dogs. The same is true of other mammals – different species of mites than what dogs deal with cause mange in other animals, including cats and wild animals.

There are two main types of demodicosis in dogs. It can be generalized, in which the whole body is covered in the mites and is inflamed; or it can be localized, in which only specific areas are being attacked. Localized demodicosis is the most common type of mange that is seen in dogs, with mites frequently seen in areas where there is delicate skin, like around the mouth, near the paws, or on the ears.

While we know that demodicosis is a condition in which mites attack the skin and overwhelm the immune system, we don’t exactly know what causes the mites to attack in the first place. You see, skin mites exist on all mammals at all times. They aren’t like fleas that dogs catch – they are organisms that were always there, living within the hair follicles of every dog. So, what causes them to suddenly cause problems on a dog that has previously never been bothered by their presence?

Most experts think there is a genetic factor that makes a dog more likely to have issues with skin mites, such as a genetic immune system issue. A poor immune system in the first place could be very easily overwhelmed, and the stress reaction causes the mites to reproduce more rapidly. Another thing that can cause mange is if a dog was born with a slightly immature immune system. In this case, the puppy will usually outgrow the mange as they get older and their immune system gets more mature.

There are some things that can make a mild case of demodicosis much worse. Things like stress or malnutrition can make the mites reproduce faster, which can make the case of mange more widespread and severe. This is because when a dog is stressed, or isn’t getting the calories and nutrients they need, their immune system isn’t able to repair itself or mature in order to combat the mites.

The visible symptoms of demodicosis in dogs always show up on the skin. They include:

The final five signs indicate that the dog’s lymph nodes have also been infected by the mites, which is a more advanced stage of demodicosis in dogs.

There are certain breeds that appear to be more prone to developing demodicosis. They include dogs like:

Most of these dogs are more prone to developing demodicosis when they are puppies, and usually outgrow the condition on their own without any treatment.

If a dog is suspected to have mange, the veterinarian will first take a sample of the affected skin. This is examined under a microscope, and the vet is looking for the presence of mites. When the vet sees the mites along with the symptoms of mange, it’s pretty easy to diagnose the issue.

Another way that a dog may be diagnosed with demodicosis is to have plasma drawn and tested for copper and zinc. Because of the immune system being compromised, the body is using up copper and zinc at a much higher rate than usual. So, if the copper and zinc levels are very low, it could be a clue that points a vet towards demodicosis. 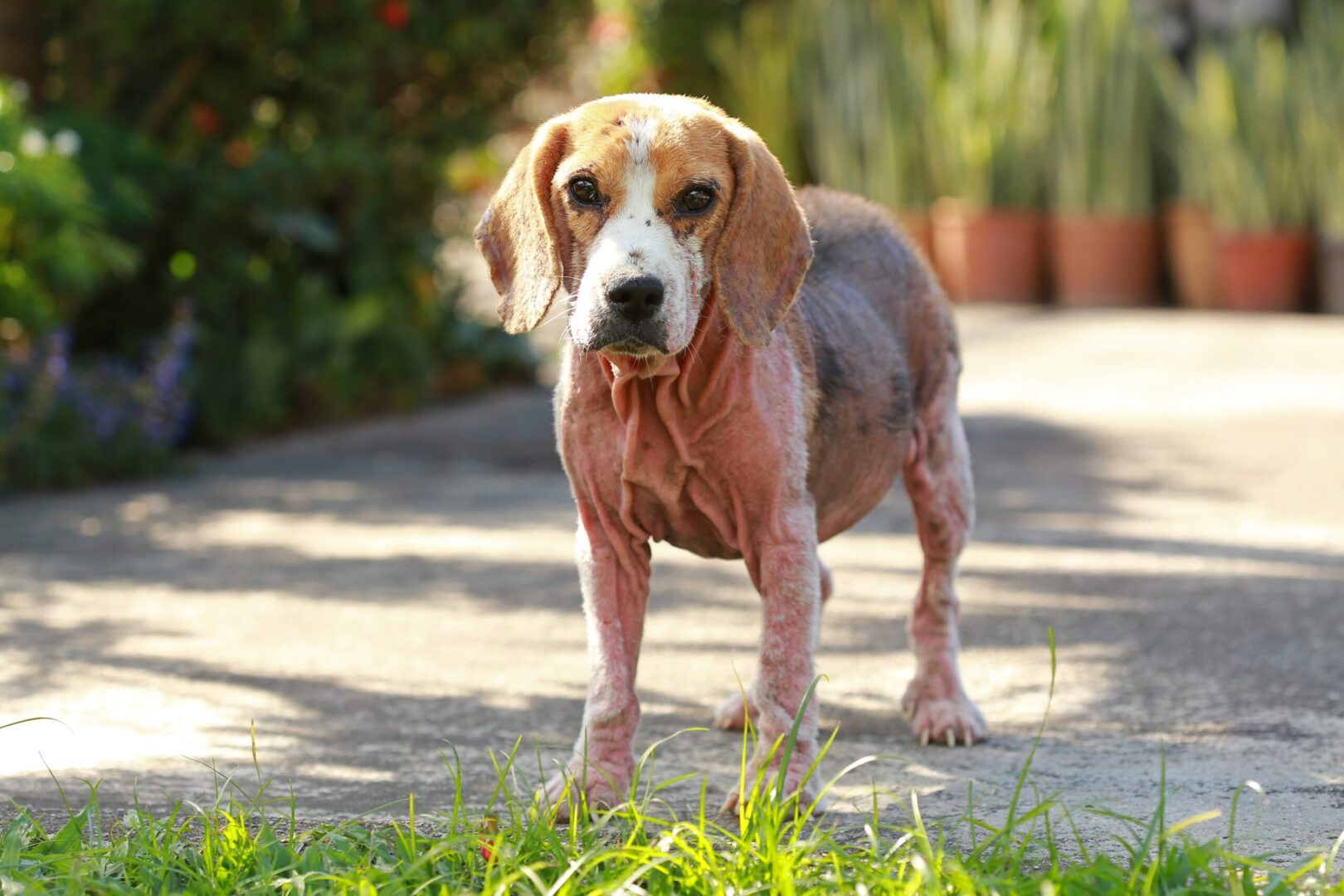 Despite being a seemingly simple condition, it is very important that demodicosis in dogs be treated. If left unchecked, demodicosis can lead to serious conditions including:

And those are just a few things that can be caused by unchecked demodicosis. Treating this condition does depend on what type of mange the dog has, how old they are, and what the vet suspects is the most likely cause of the mange. For example, a puppy that the vet suspects was born with an underdeveloped immune system may simply be monitored while she grows out of it. However, if the demodicosis is generalized all over the entire body or the localized demodicosis is very serious, the vet may try prescribing medicated bath products or ointments that contain a pesticide to kill the mites. Another common method of treatment is to give the dog a de-worming medication. De-wormers should only be used under supervision, because in order to be effective against the mites, dogs have to be given larger-than-usual doses of de-wormers.

For bath products, most vets will use Amitraz, the only FDA-approved therapy for demodicosis. This is a dip, similar to a flea dip, that is used weekly to help kill the mites. Many dogs will have to be clipped so that their hair doesn’t get in the way of the treatment getting to the skin. Humans who do the dip need to protect their skin and ensure that they are in a ventilated area.

The most common de-wormer used for this treatment is Ivermectin, but be aware that some breeds (especially Collies, Australian Shepherds, Sheepdogs, and other herding breeds) cannot take Ivermectin. The side effects of this de-wormer include things like lethargy, tremors, and weight loss, so vet supervision is advised.

There are a few other treatments that can be tried, but they don’t usually have great success rates. These include things like a collar with Amitraz on it, similar to a flea collar; a treatment of vitamin E oil; stimulants for the immune system; and various medications that have not been reported as helpful, but may be tried in stubborn cases.

While this treatment is occurring, the vet will also treat any issues that popped up as symptoms of mange, such as other illnesses that were caught while the immune system has been compromised.

These treatments are usually very effective against mild to significant cases of localized mange. However, generalized mange that is all over the entire body can be more challenging to treat. In these cases, a vet may prescribe antibiotics and supplements to help boost the immune system.

During the treatment to cure demodicosis in a dog, the vet will continue to take skin scrapings to look for changes in the mite population. If the mites appear to be diminishing, they will know that the treatments are working. In some cases, dogs never do shake demodicosis, and require long-term, regular medication to maintain good health.

Because we don’t know the exact cause of demodicosis, we can’t know how to prevent it. However, most vets agree that keeping your dog healthy in the first place is a good way to ensure that they have a strong immune system that won’t be compromised. Finally, if a dog is known to have chronic issues with demodicosis, it’s a good idea to avoid breeding them, because it is very likely that they will pass on their immune deficiency issues. This is especially important for females, for two reasons: first, the estrus cycle will cause the dog to get a new round of significant demodicosis symptoms herself; and second, because it is very common for the mother dog to pass the disease on to her pups. Having her spayed will prevent more dogs from living with this potentially serious disease.

The good news for dog lovers is that demodicosis is not contagious. You can continue to pet and handle your dog, and you don’t have to worry about other pets, or your kids, catching the mange. Skin mites can spread from a mother dog to her litter as they nurse, but it’s not common for mange to spread from one dog to an unrelated dog, especially if they are of different breeds. So, you don’t have to worry about handling your dog if they have demodicosis. Just remember that they may be sensitive to touch in the areas where the skin is inflamed. So, while it’s sad and potentially worrying to see a dog with mange, the best thing you can do while they receive treatment is to continue to love them as much as they will allow.

To sum it all up, demodicosis is the scientific name for a condition known as red mange. It is caused by a compromised immune system being unable to fight off skin mites, and it can lead to a lot of serious complications. If you see your dog with bald patches of red or inflamed skin, or if they have “hot spots” on their body anywhere, take them to a vet. There are treatments that work well for mange, but they work better if the disease is caught and treated early.

Otherwise, just work to keep your dog’s immune system strong and healthy. There’s nothing you can really do to prevent mange except being sure to neuter or spay a dog that has issues with chronic demodicosis. Finally, mange isn’t contagious across species, so you don’t have to worry about petting your dog, or having your dog around kids or other types of pets.

Be sure to pay attention to the treatment options if your dog is a Shepherd, a Collie, or another herding breed. De-worming medication, which is often used to treat mange, is not healthy for these dogs in large doses.

With this guide, you can keep your dog healthy and hopefully help them avoid mange – but if they do develop this condition, you’ll know exactly what to watch for, and what to expect for the future.