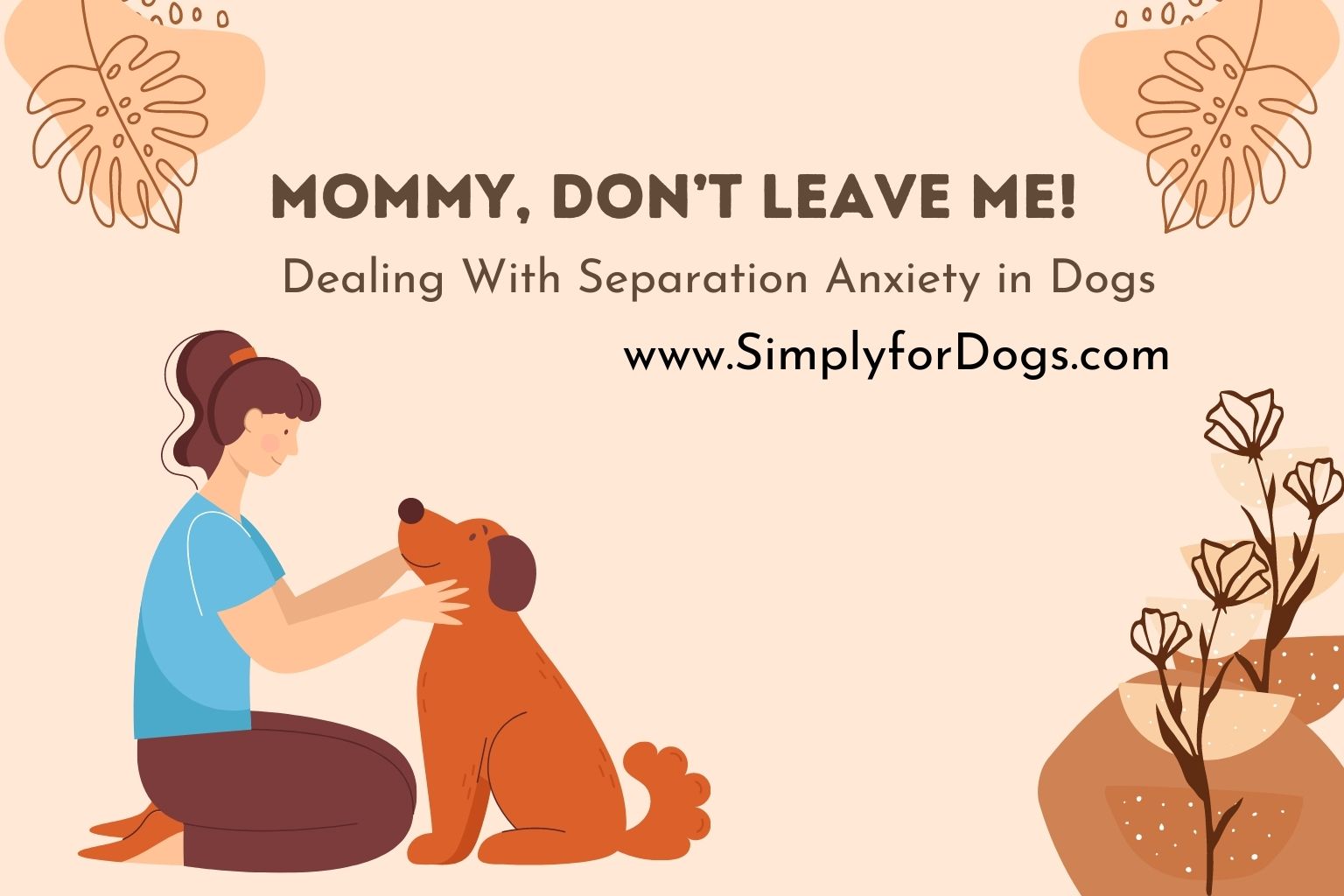 
So, here is how it goes. You’re on your way to work, and as you leave, your dog starts crying a lung up. You try to console her, but it doesn’t work, and you leave feeling like the worst person who ever walked the earth. Or you take her out for a drive, exit the car and say, “I’ll be back in a minute, sweetie,” and the howls follow you into the grocery store, or the bank, or the post office, and ultimately someone comes in and says, “I think there’s something wrong with that dog out there.”

Yes, there is something wrong. It’s called separation anxiety, and it might horrify you to know that it’s the second most common reason why people either give dogs away, or have them euthanized. As a side note, the most common reason isn’t much more palatable either – it’s because people find out that they can’t afford their pets. But back to separation anxiety. What is it, why does it happen, and what can you do about it?

Separation anxiety simply stated, is a behavioral problem that manifests in barking, whining, excessive drooling and destructiveness. It can be hard to correct, because much of the time we are actually aggravating it without meaning to. Think about this – do you make a huge fuss over your dog when you get home? I don’t pretend to know everything about the way dogs think, but it seems to me that what you’re saying is, “Being home is such a good thing!” Your dog takes it to the next logical conclusion, and decides, “Then being away must be a very bad thing!” Your dog becomes concerned when you are away, and every time you make a big deal out of coming home, you are telling him that your absence is a reason for stress.

Dogs Are Not Stupid

Now, having discussed real stress due to separation anxiety, let’s talk about your manipulative dog. No, seriously! True separation anxiety is caused when a dog fears the absence of what he perceives to be a member of his “pack,” for whatever reason. But according to “Dog Whisperer” Cesar Millan, there is also such a thing as simulated separation anxiety. The symptoms are the same, but the behavior is actually learned. Your dog knows perfectly well that if he acts out when you leave, you will pay attention to him. In short, you are rewarding him for bad behavior. He isn’t really stressed, and he doesn’t really have separation anxiety. He just knows that if he makes a big fuss, you are going to pet him and snuggle him, and tell him what an awesome boy he is.

If the separation anxiety is simulated, it can be fairly easy to correct. Crating is often a good solution. Put your dog in his crate a few minutes before you are ready to leave. Ideally, you should start crating when your dog is a puppy, but it is never too late to start. Harsh as it sounds, put the dog in the crate and ignore him. He will probably cry, and you will probably be tempted to let him out. But if you do, you are just reinforcing the undesirable behavior – telling him, in effect, that crying will get him what he wants. Start the training by letting him out before he starts to cry, so that he will know that you will never really abandon him. Then, increase the crating time. If he cries, hard as it might be, ignore him until he stops. Then let him out. You are trying to teach him calmness and patience.

Of course, you can put toys and food in the crate. You don’t want your dog to think that he is being punished, or that the crate is not a good place to be. But always, always be consistent. That means not giving in to crying. That is exactly the behavior you want to correct.

Now, begin taking your dog out of the crate when you are ready to leave the house. Teach him to wait at the door, and stay. If he knows what you expect from him, he will become more confident. Then, when you leave, just do it quietly. Don’t make a big deal out of it; don’t provide a whole lot of cues that tip your dog off to the fact that you’re leaving (rattling keys, checking messages on your phone and so on). And here’s one of the best things you can do – leave and come back. Open up the garage door, start the car, back it out… and then come back. Do it again. Maybe even do it a third time. This will reinforce in your dog’s mind the idea that no matter how many times you go away, you will always come back. You will never leave him.

Now, when you come home, don’t make a big production. You might want to get down on the floor with your dog, hug him, and say, “Oh, Mommy missed you so much!” But don’t do it. Coming home should be perfectly ordinary. Hard as it might be, if your dog has separation anxiety, the best thing you can do is ignore him. Come in, hang up your coat, put away the groceries… you get the idea. Then you can pay attention to your dog.

See how it works? Going away is no big deal. Neither is coming home. It’s just stuff that happens.

I can’t stress often enough that crating is the best way to begin curing separation anxiety. One of the best crates on the market today is available from Amazon. It’s the OxGord 30″ Large Dog Crate, Double-Doors Folding Metal w/ Divider & Tray | 30″ x 18″ x 20″ | 2016 Newly Designed Model, and right now it’s just $29.95, down from $33.95, and shipping is free! It can help your dog to develop the self-confidence he needs to know that you are not going to leave him, and that he will be safe while you are away.