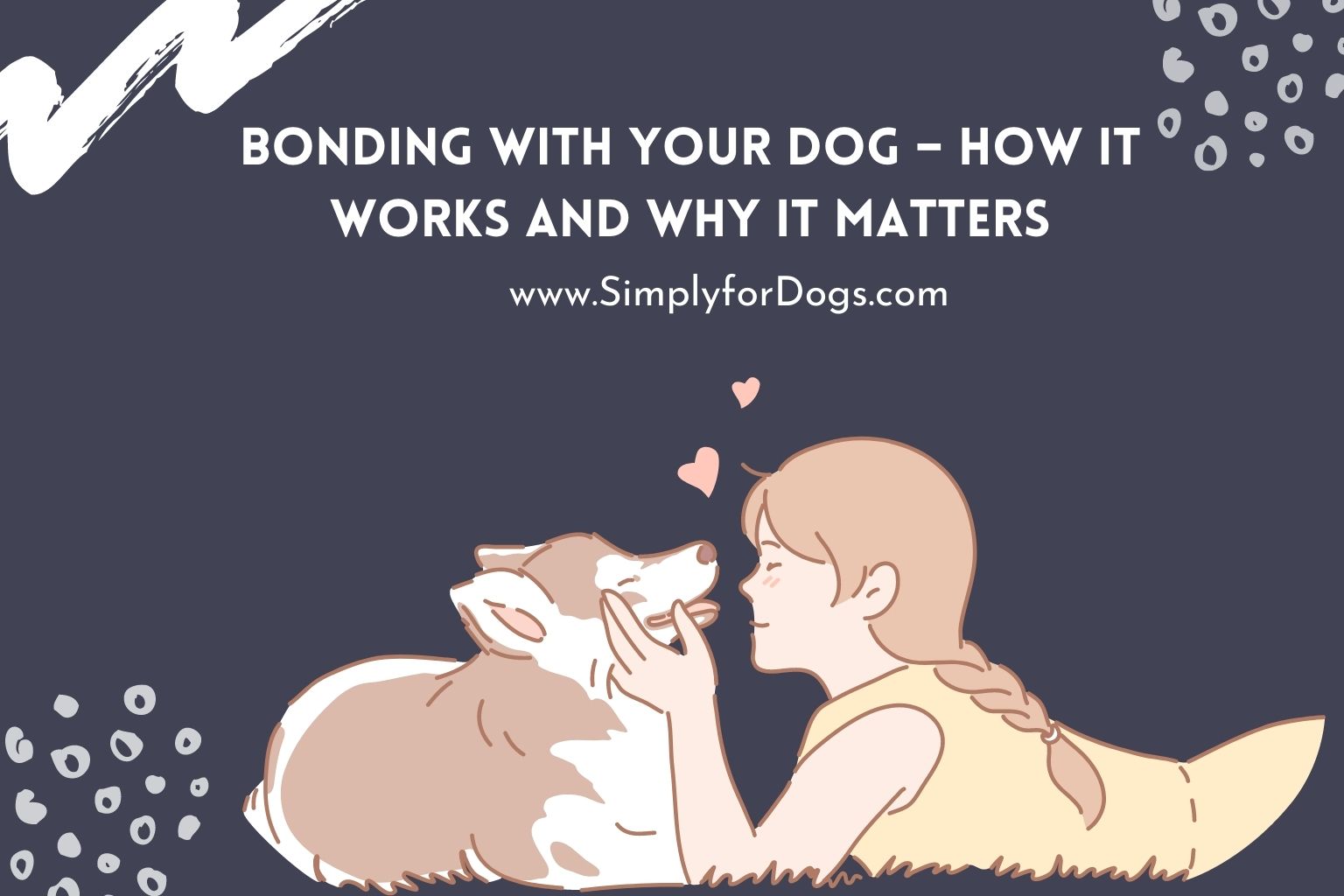 I think I’ve been very fortunate with the dogs I’ve had over the years. I’ve bonded pretty much instantly to any dog I’ve ever had. Sometimes, I wonder if it’s kind of like my very own super-power!

It’s always been pretty much a matter of looking into a dog’s or a puppy’s eyes, and thinking “Hello, my darling, where have you been all my life?” and then getting the same thing back.

I’m not sure why that is, but I think maybe it’s because I don’t see a dog as a blank slate. I figure there’s something there that I can connect with; I just have to find out what it is.

You don’t need, from my perspective, to begin with that “tabula rasa” and then start writing on it, which is what people will tell you when they’re trying to convince you that if you want to truly bond with a dog, then you’re going to have to start with a puppy.

Think About What Makes Sense

If you could only bond with a puppy, then how would you explain the incredible relationships that happen between people and dogs that they have rescued? Would the explanation be that gratitude facilitates the bond? Maybe that’s true to some extent.

But then, I think of my friend Jackie and her dog Emil. I talked about them in Is It Time to Let Go? and, most recently, in 5 Things to Know About the Fun and Frustration of a New Puppy.

Emil hadn’t been badly treated, but his owner didn’t have time for him, and Jackie did. And that was the beginning of an amazing love story that lasted until Emil passed and Jackie had her heart broken. I have never seen a bond that powerful before, and I only hope that someday I am fortunate enough to see it again.

So no, you don’t need to start with a puppy in order to form a strong bond with a dog. That’s a myth. There are, however, bonds that are stronger than others. How do they happen?

The fact is that a dog can bond with many humans over the course of his life. The first human bond is with the breeder – the one who takes him away from his mother periodically for handling so that he can get used to the human touch. Then, depending on the purpose of the dog, other bonds can occur.

A service dog, for instance, will bond with his trainer and then, later, to the human he is destined to assist. A police dog will bond to his initial trainer, and then to the officer who continues his training, and finally to the humans who take him in at the end of his career, assuming that his partner’s family does not fill that role.

As to rescue dogs, one would assume that when a dog is rescued from an abusive situation, he will be confused, because the only bond he has ever known was to his abuser.

It’s a toxic bond, yes, but a bond nonetheless. It’s probably not all that strong a bond, though, as is suggested by anecdotal evidence of abused dogs who have stood by while their owners were threatened, refusing to act. The dog no doubt feels that the owner is not worthy of protection; the bond is flawed.

In fact, maybe it’s a stretch even to call it a bond, since it’s based in fear. That same dog might fight to the death for his rescuer, though.

Dogs will also bond to some degree to their pet-sitter or the person who looks after them at doggy day-care.

9 Tips for Bonding With a Shy or Skittish Dog (Video)
Is the Timeline of Puppy Cuteness a Myth? (Video)
17 Cane Corso Dog Breed Facts

So, you can see that you don’t have to start off with a puppy in order to have a bond with a dog. In fact, a lot of people make the mistake of thinking that if they buy a purebred puppy, that perfect bond is somehow going to happen, and it’s not necessarily going to be the case.

The best bonds happen out of love, pure and simple. When you love a dog, I believe that he will know, on some very basic level, that you are worthy of receiving love in return.

Have you ever sat in a bar with a drunken girlfriend, who’s crying in her umbrella drink and saying to you, “I love him so much; I just don’t understand why he doesn’t love me back?” Of course you have.

We all have. I’ve done that a million times (well, okay, not a million, but more than enough times), sitting there in the dim light with a friend crying and snotting all over my shoulder, failing to understand why unconditional love hasn’t been returned.

The thing is that the “If I just love him enough” thing doesn’t work with people, but it does work with dogs. When a dog receives unconditional love, he is inevitably going to return it, many times over.

And here’s the flipside: if, for some reason, you don’t offer up that kind of love, then no amount of training or coercion is going to inspire it.

Sometimes, though, bonding doesn’t happen, and, sometimes, we don’t even know why. I’m put in mind of my friend Neila, as I often am. She breeds Rottweilers, and rescues from time to time as well. With one of her rescues, she ended up having to re-home, not because of any issues with the other dogs, but because of issues with Neila herself. “I don’t know what it is, Ash,” she said to me, “But I just can’t seem to warm up to Jenna. She’s a lovely dog, and she has a great personality, but somehow I’m just not feeling it. I like her, but I don’t love her, and I don’t know if I ever will. It’s not her fault; it’s me.”

Neila is a pretty smart person, so once she knew that there was no way she was ever going to bond with Jenna, she stopped trying and started looking around for someone who could bond with the dog. Neila recognized her own flaw and worked through it because she knew how important it would be for Jenna to bond with a human who could offer unconditional love.

Today, Jenna lives with a family just down the street from Neila. Jenna has a mom, a dad, two kids and a cat to play with. Neila visits sometimes.

The point here is that there has to be a foundation for a bond to form. If there is no foundation, there will be no bond. So if you ever do find yourself in a situation where bonding seems impossible, do yourself and the dog a favor, and try to create another scenario where it can happen.

With Neila and Jenna, the bond was never going to happen in any significant way. With most dogs and puppies, though, a bond will usually occur at some point. Most of the time, it happens with the person who spends the most time with the dog; this person becomes the “pack leader,” and the dog looks to that person as the one who is going to be the most committed to the relationship, and to the wellbeing of the dog.

That’s not to say that a dog will not bond to other people in the household, just that there is likely to be a primary bond that will take precedence over all others.

Some human/dog bonds will happen almost immediately. Others might take a bit of time. So if you want that all-important bond with your dog, spend a lot of time with him one-on-one. Go for walks, go for drives, take in local events, go to the dog park and anywhere else where he is going to look to you for guidance.

Communicate with your dog. Look at his body language; determine what he’s trying to tell you, and react accordingly. Just as an example, if he’s nervous when you meet another dog, take charge; lead your dog away, or face the other dog down and make it go away. Be a leader in your dog’s eyes.

It’s also important to let your dog know beyond any doubt that he is a very important part of your family. Don’t shut him away in a kennel or tie him out in the yard where he’s going to have no human interaction and no guidance. If your dog feels isolated, he’s not going to bond to you. He’ll want to, and he’ll be heartbroken if he thinks that you don’t want to bond. So accept his love; don’t leave it tied at the end of a leash.

If you’ve taken a dog with issues – a rescue – then give him time. Don’t expect him to bond overnight. Keep in mind that he’s fearful, and it’s going to take some time for him to learn to trust you.

He hasn’t had much experience with “safe” humans, so don’t expect him to decide right away that you’re trustworthy and deserving of love. If he responds to you with aggression or fear, pull back and give him his space.

If you don’t, the situation is just going to get worse. Bonding to a rescue dog can take time, but if you’re willing to give the dog the time he needs, you could end up with a very loving, loyal companion.

It’s All About Communication

Whether you’re dealing with a puppy, a re-homed dog or a rescue, communication is the key. You need to be consistent and fair; that’s all that most dogs expect. Consistency means that you behave in the same way all the time; you don’t get to be cranky or angry just because you’re having a bad day; you treat the dog the same way all the time no matter what’s going on in your life.

Being fair means just that; don’t ask more of the dog than he can reasonably deliver. If he’s traumatized, pull back and give him some room. If he’s just a puppy, don’t expect him to act like an adult dog.

If you are unfair and you confuse your dog, then communication is going to break down and there will be no bond. And without a bond, quite honestly, you don’t have much of a relationship with your dog.

9 Tips for Bonding With a Shy or Skittish Dog (Video)
Is the Timeline of Puppy Cuteness a Myth? (Video)
17 Cane Corso Dog Breed Facts

As I said in the beginning, I’ve always found it easy to bond with dogs. I’ve never been in the position Neila found herself in, faced with a dog that I liked well enough but just couldn’t seem to get close to.

I think if I ever do, I’ll do what she did: find the dog someone that he can bond to. The bond between human and dog is so special that it should take precedence over everything else, even our desire to rescue.

Every dog deserves to have a perfect, loving bond with a human being. Most of the time it will happen naturally; dogs want to bond, and we want to bond to them. So work early with your puppy to make sure that you have a good bond.

And if you’ve taken an adult dog, and the bond doesn’t happen with you, then work on the dog’s behalf to make it happen with someone else, and move on.

Every day, as Janice and Leroy and I tuck into bed, I say to myself, “This is good and right.” My wish for all of you is that you also enjoy that feeling, because from where I’m sitting, there is no more perfect happiness than the bond between good dogs and good people.