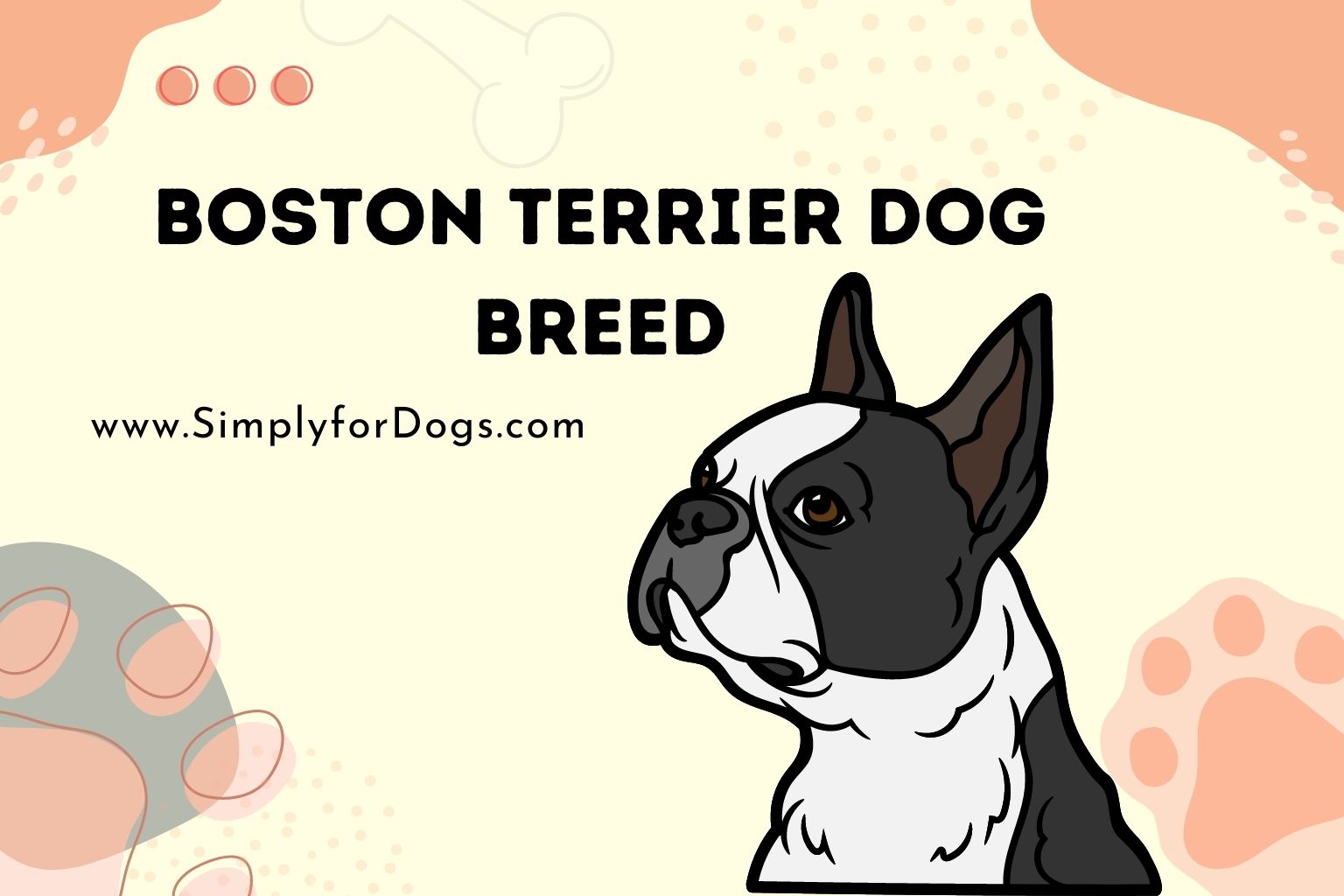 The Boston Terrier is a fairly new breed, dating back just a bit more than a century. The breed has become very popular as a family pet, and in fact, can be a great fit for just about any owner. Keep reading to learn more about these spunky little dogs!

The Boston Terrier originated in Boston (as you might have guessed from the name), and is believed to have been bred for pit fighting, although there are several stories of how the breed came to be.

One version of the origin story is that Bulldogs were crossed with the English White Terrier (which is now extinct). This is said to have been the activity of coachmen, who when they weren’t driving their wealthy employers here and there, apparently had too much time on their hands and used that time to create a new fighting breed.

Another version credits the development of the breed to a man by the name of Robert Hooper, who brought a dog of the same mix, named Judge, to the United States from England. Apparently, Judge reminded Hooper of another dog, one that he’d owned as a child. A slight variation on this story is that Hooper bought Judge in Boston from one William O’Brian. Whichever version is true, we do know that Judge existed and that he is most likely the ancestor of today’s Boston Terriers.

The judge was actually used for just one breeding, to a dog called Burnett’s Gyp, who was owned by Edward Burnett, and the breeding yielded just one puppy, Well’s Eph. Although apparently not the most handsome dog, Well’s Eph did have several desirable traits, so he was bred quite a bit. The progeny were known as American Terriers, Round-Headed Bull-and-Terriers, Boston Bulldogs, and American Terriers. It wasn’t until 1889 that the breed became known as Boston Bull Terriers. The AKC recognized the Boston Terrier in 1893.

It didn’t take long for Boston Terriers to become popular country-wide – in fact, by 1915, they were the most popular dogs in the United States. They remained in the top ten for another 50 years, and today ranks at number 21 of the breeds recognized by the AKC.

If you are searching for Boston Terrier puppies for sale, you will find plenty of sites that purport to deliver puppies of any breed, even the rarest, overnight and anywhere in the world. These sites are not to be trusted. Overnight delivery is very unlikely to happen, as cargo spaces have to be booked. And nobody can deliver anywhere in the world – many countries have restrictions on pet shipments. If you put your faith in a site offering overnight, worldwide shipping, and give them a deposit, you will have lost your money and you’ll never see your puppy.

The other thing is that no reputable breeder is ever going to let you have a puppy without vetting you thoroughly (more on what constitutes a reputable breeder in a bit). That’s not something that can be done with the exchange of a few emails.

Your best source for Boston Terrier puppies for sale is breed clubs. These clubs exist in all states and can put you in touch with good breeders.

To say that designer breeds have exploded in popularity would be an understatement, and there’s no shortage of “blend names” attached to various crossbreeds. Click here to see a list of names for Boston Terrier mixes, along with some pretty cute photographs!

Any dog can end up in a shelter. Unfortunately, a lot of people make the assumption that if they take a shelter dog, they’re just getting “someone else’s problem.

Don’t assume, if you’re fortunate enough to find a Boston Terrier for adoption in an animal shelter, that it’s the fault of the dog. Maybe it’s just your lucky day! In any case, shelter staff can tell you why the dog ended up there and what you might need to provide in order to ensure that you end up with a good family pet.

The price for Boston Terrier adoption from a shelter is generally in the neighborhood of $350 to $550. That’s considerably less than what you’d pay for a Boston Terrier puppy from a breeder.

So, how much do Boston Terriers cost? The price for a Boston Terrier puppy from a breeder is, on average, $800. A superior dog with outstanding breed lines, though, could run you as much as $4,500.

That said, Boston Terriers can be a bit stubborn. Firm, consistent training is a must. It’s also important, as is the case with any dog, that you socialize your Boston Terrier. It’s best to start early, introducing your Boston Terrier puppy to all manner of other people and animals. Known as the American Gentleman, the Boston Terrier is lively, smart, and affectionate with a gentle, even temperament. They can, however, be stubborn, so persistence and consistency are definite musts when training.

Boston Terriers are great with kids. In fact, they’re just about perfect for children of all ages, since they have the temperament in spades, and the size is ideal as well – they’re big enough that rambunctious kids aren’t likely to hurt them and small enough that they won’t accidentally hurt the kids!

The Boston Terrier temperament is also such that a dog of this breed will typically be good with other dogs. He’ll also be good with cats, provided that he’s properly introduced to them. It’s usually better to introduce a Boston Terrier puppy to an adult cat than it is to bring a kitten into a household with an adult Boston Terrier, although with patience, the reverse can also be done successfully.

It’s usually the case that in the early days of breed development, people weren’t paying much attention to color. This is no different when it comes to Boston Terrier colors and the breeding thereof. It wasn’t until the 1900s that breeders started to think, “Hey, maybe we should come up with a breed standard.”

Today’s Boston Terrier comes in just three colors – brindle, black, and seal. The breed standard also requires that the muzzle be white and that there also be ablaze on the face and a white chest.

If a breeder tries to tell you that you’re getting a very valuable, rare dog with a Boston Terrier that’s a solid color, you’re not dealing with a good breeder. Solid colors are not in compliance with the AKC breed standards. At best, these breeders know nothing about the your breed standard, and at worst, they’re trying to scam you.

If you’ve been reading up to this point, you already know a fair bit about what constitutes a bad breeder. So let’s talk about good breeders.

Good breeders care very much about their dogs, and about the sort of home that a puppy out of one of their litters will occupy. A good breeder will grill you. They’ll want to know where you live, who you live with, whether you have other animals if you have kids, how many kids you have, what you have for breakfast, what color your car is, and what kind of condiments you like on your hamburger.

A good breeder will, though, want to know a lot about you. So if a breeder seems disinterested, and isn’t asking you a ton of questions, chances are you’re dealing with a bad breeder. Or maybe even a puppy mill. Get the hell out of there, and resist the temptation of thinking that you’re at least saving one dog. Sure you are. But you’re also dooming countless other puppies to being born and mistreated, and encouraging puppy mill operators to breed adult dogs to death, following a horrible life in pens where their feet never touch the ground, and where, when they outlive their usefulness when it comes to breeding, they’re either killed or starved to death.

Please, please don’t allow your desire for a Boston Terrier puppy to make you complicit in this horrible sort of abuse.

Boston Terriers really don’t shed all that much. In fact, they’re among the dogs that are considered to be hypoallergenic.

Keep in mind, though, that there really isn’t such a thing as a hypoallergenic dog. Any dog is going to shed. It’s how they keep their coats clean and their skin healthy. With short-haired dogs like the Boston Terrier, though, shedding is at a minimum. People who have sensitivities to dog hair are therefore going to be better off with a Boston Terrier as a pet than they would with many other breeds.

You can easily keep shedding to a minimum with your Boston Terrier if you give him a protein-rich food that also contains a bit of fat. An egg a couple of times a week can also go a long way to reducing Boston Terrier shedding. Remember, too, that it’s very important to make sure that your Boston Terrier is well-hydrated in order to ensure a healthy coat, so always have fresh water on offer.

If your Boston Terrier seems to be shedding more than is normal, it could be that he’s stressed. Try to figure out what’s causing it – have you moved, added another pet, had a baby, etc., etc., etc.? If it’s something like that, pay a lot more attention to your Boston Terrier – he needs to know how much you love him. If you can’t identify the cause of the excessive shedding, see your vet.

Boston Terriers are very smart and very trainable, but they can be stubborn.

Like most terrier breeds, Boston Terriers can be hyper. If you have a hyper Boston Terrier, provide him with lots of exercises and with games that will stimulate his brain.

Do Boston Terriers have tails?

They have naturally short tails. They are not docked.

When do Boston Terriers stop growing?

A Boston Terrier will usually reach full maturity at about 12 months.

Most terrier breeds are a little more “barky” than other dogs, and the Boston Terrier is no exception. He will bark to alert you to the presence of strangers.

Are Boston Terriers “one person” dogs?

They can be, but most of the time they’ll be cordial with just about anyone.

Can Boston terriers be left alone?

Although they prefer to be with their humans, Boston Terriers are not prone to separation anxiety. Most Boston Terriers can be left alone for up to eight hours, making these dogs ideal for people who work during the day.

So, do you want a Boston Terrier? We hope that this introduction has helped you to determine whether the breed is right for you. Boston Terriers are smart and affectionate, and a great fit for just about any family. If you’ve decided on one, then all we can say is congratulations! You’re getting a wonderful dog.