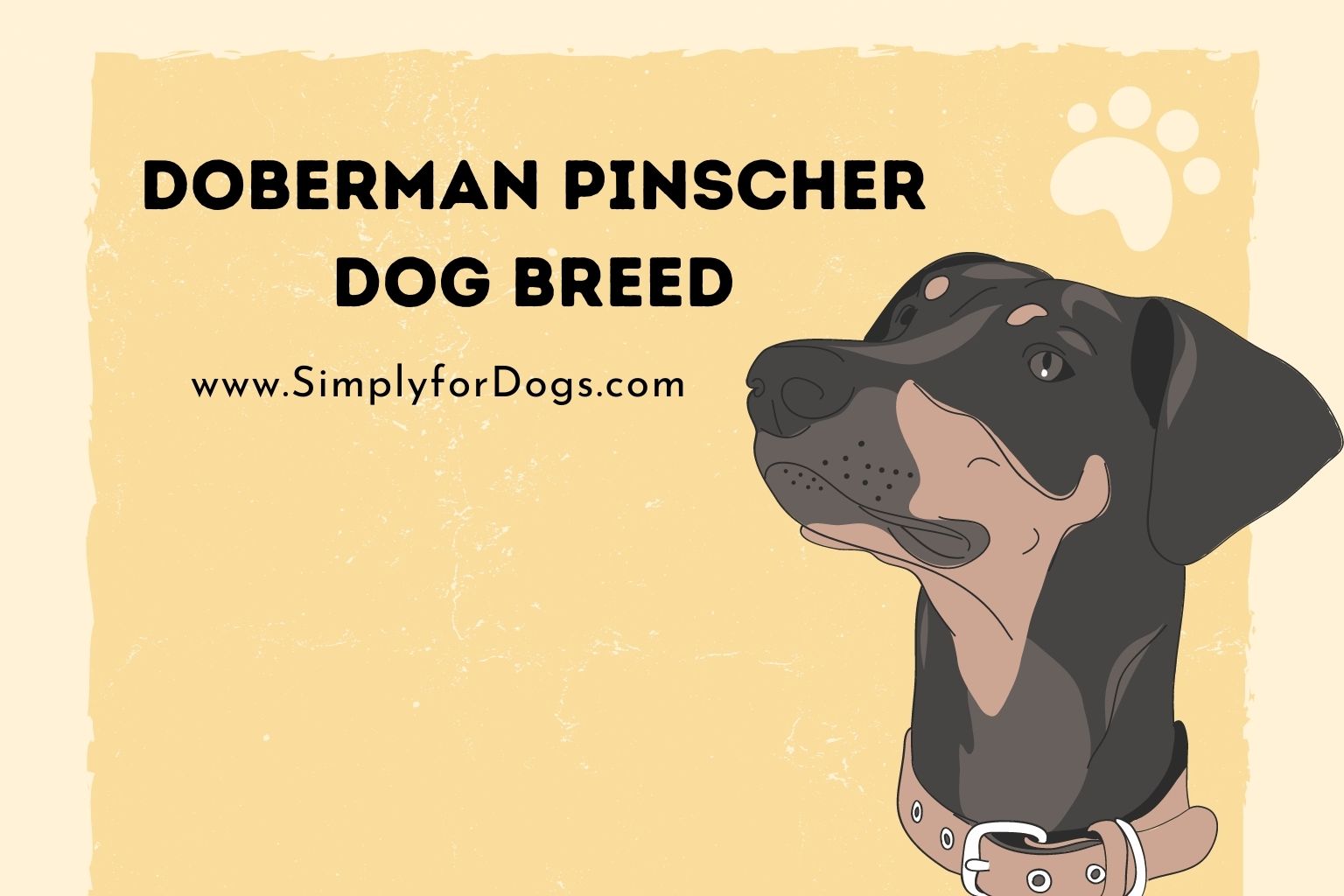 The Doberman Pinscher (commonly referred to simply as the Doberman or Dobie) is a highly versatile dog. Athletic and protective, a well-trained and properly socialized Doberman is also a great family dog. Keep reading to learn more about this impressive breed!

The Doberman originated in late 19th century Germany and is believed to have been developed from several dog breeds, including the German Pinscher, the Black and Tan Terrier and the Rottweiler. So how did the Doberman Pinscher get its name? It derives from the original breeder, a Thuringian tax collector called Louis Dobermann. The spelling, Dobermann, is still used in some countries to identify the breed, although in most areas the final N has been dropped.

In addition to collecting taxes, Louis Dobermann also served as a dog catcher. Both occupations could be fraught with danger, so Dobermann frequently performed his duties accompanied by a dog. Eventually, he began to breed dogs that he believed would be ideally suited for protection and companionship. By the time of Dobermann’s death in 1894, the breed was well established, and other breeders carried on his work.

The Dobermans of the late 19thcentury were generally more aggressive and stubborn than those we know today. However, one breeder, Otto Geller, focused on producing dogs of steadier temperament. He is credited with shaping the modern Doberman.

With the first and second world wars, the Doberman Pinscher, like many breeds, began to decline. Times were difficult economically and many people simply couldn’t afford to keep and breed large dogs. Dobermans were owned mainly by the police, the military, and the very wealthy. It’s believed that if Dobermans hadn’t been brought in large numbers to the United States, the breed would have died out. Fortunately, it didn’t, and today the Doberman Pinscher is ubiquitous.

Doberman Pinschers are typically healthy dogs. However, they can be prone to certain diseases and conditions. One of the most common is Von Willebrand’s Disease, which is a bleeding disorder similar to hemophilia. Often the condition isn’t identified until the dog has surgery or is injured, and the blood doesn’t clot normally. Von Willebrand’s is inherited, so if you’re buying a Doberman puppy make sure to ask the breeder if either parent has the condition. Reputable sellers will not breed dogs that have Von Willebrand’s. If your Dobie needs surgery, there is a simple test that your veterinarian can administer to determine if your dog has the condition.

Like many large dogs, Dobies can also be prone to hip dysplasia. This is another inherited condition. It occurs when the hip and thigh bones don’t fit properly. Symptoms can include lameness and pain in the hind legs, although some dogs may not experience any discomfort. The condition can be controlled with medication and sometimes with surgery. Dogs with this condition should not be bred.

Other conditions that Dobies can be prone to include hypothyroidism (a thyroid gland disorder that can lead to obesity, skin conditions, lethargy and epilepsy), Wobbler’s syndrome (a malformation of the spine that can lead to neck pain and leg paralysis), cardiomyopathy (weak heart muscles) and gastric torsion (a condition in which the stomach fills with gas and then twists). Your Dobie may never develop any of these conditions. They are, however, things to keep in mind when deciding whether the Doberman Pinscher is the right breed for you.

To keep your Doberman Pinscher healthy, make sure he gets regular veterinary checkups. A good diet is also essential, so feed him a high-quality dog food formulated for active breeds. Dobies aren’t usually recreational eaters, so you can free feed if you like. Otherwise, make sure he gets 2.5-3.5 cups of food per day, spread over two meals.

Doberman Pinscher puppies take a while to mature Although a Dobie is considered to be an adult at one year, he will continue to grow a bit until he turns three. Emotionally, Dobies remain “puppies in their mind” until they’re between three and four.

When choosing the right dog from a litter of Doberman Pinscher puppies, look for one that’s “middle of the road.” You don’t want the bully who’s running roughshod over his littermates. By the same token, you don’t want a fearful puppy who’s cowering in a corner and not interacting with the rest of the litter. You should also make sure to interact with the mother and, if possible, the father. Parents with pleasing temperaments will usually pass them on to the litter.

Socialization is important with any breed of dog, and vital when it comes to Doberman Pinscher puppies. The last thing you need is a large dog that isn’t good with people or other animals. Enrolling your Dobie pup in doggie daycare or puppy kindergarten can be a good start when it comes to socialization. Also, make sure to take your Dobie places where he can enjoy new experiences and meet people.

You should also start obedience training early. It’s important for any dog to know the basics – sit, stay, come, and so on. If you leave obedience training too late, you may have difficulty controlling your Dobie – he’s going to become muscular and strong very quickly. When training, always be firm but kind – Doberman Pinschers are highly sensitive and do not respond well to harsh treatment.

The breed often mistaken for a Miniature Doberman Pinscher is actually a separate and distinct breed – the Miniature Pinscher, often called “Min Pin.” This breed is older than the Doberman and was bred originally for the purpose of hunting vermin in stables and homes. Like the Dobie, today’s Min Pin is an energetic, fearless companion dog.

As of the time of this writing (February 2020), you can expect to pay between $1,500 and $2,500 for a Doberman Pinscher puppy. The price could be higher for a show-quality dog with impressive bloodlines.

The most common Doberman colors are red and black/tan. Blue and fawn are less common.

Doberman Pinschers have a life span of 10-13 years on average.

When a large breed dog like a Doberman Pinscher is in a rescue facility, it’s often because of poor training and lack of socialization leading to behavioral problems. In such cases, it would be unwise for a novice owner to consider adopting the dog.

Of course, sometimes dogs end up in shelters and rescue facilities for other reasons – perhaps the owner has fallen on hard times or even died. Rescuing a dog in these circumstances would certainly be an act of kindness. If you’re considering a Doberman Pinscher rescue, check out local shelters, breed clubs and rescue groups. If looking on line, be very careful – there are tons of scams out there!

Doberman Pinschers are fun-loving, playful, and highly intelligent. Although not usually aggressive, they’re very protective if they believe their humans are in danger. As previously suggested, socialization is vital – a poorly socialized Dobie is likely to perceive any stranger as a potential threat.

Dobies are typically good with children. However, you should never leave a child alone and unsupervised with your Dobie, and children should be taught to be respectful – no ear pulling or other rough handling!

Doberman Pinschers are also usually good with other animals provided that they’ve been raised with them. Dobies can sometimes be aggressive with animals that they don’t know, especially if they think that those animals may intend harm to their humans.

Dobies are sizable dogs, weighing anywhere from 60-80 pounds and standing 26-28 inches. Males are usually a bit bigger than females

Doberman Pinschers have short, sleek coats that require little in the way of grooming. They do shed, but not much, and weekly brushing will usually suffice. Bathing is only necessary if your Dobie plays in the mud or rolls in something nasty.

All dogs benefit from having their teeth brushed a few times each week in order to remove tartar and bacteria. If you can brush your Dobie’s teeth daily, that’s even better.

If your Dobie doesn’t often walk on hard surfaces that would wear down his toenails, a monthly trim is a good idea. If you can hear the nails clicking when he walks, they’re too long. Many people are nervous about toenail clipping, not knowing where to find the quick. If you’re inexperienced, take your Dobie to a professional groomer the first time – a groomer can show you how to trim without risking injury to your dog.

Check your Dobie’s ears once a week to see if there’s any redness or odor – these are signs of infection that might require veterinary care. If the ears are dirty, use a pet-formulated ear cleaner applied with a cotton ball or pad. Clean only the outer ear – the ear canal is off limits!

Regular grooming isn’t just important for your dog’s health; it’s also a way of bonding with your Doberman Pinscher. Grooming should be a good experience for your best buddy, so be generous with praise and treats. You’ll both enjoy the time spent together, and you’ll be able to spot any potential health issues early on.

A Doberman Pinscher, properly trained and socialized, is no threat to anyone who doesn’t intend to harm his humans.

There is no difference – “Doberman” is simply the shortened version of the breed name.

Are Dobermans “one person” dogs?

Dobermans will sometimes develop a preference for one person. This is possible with any breed of dog.

Is a Doberman good for a first-time owner?

Many first-time owners have had success with Dobies. They’re not generally recommended for newbies, though.

Does a Doberman bark a lot?

Some Dobermans can be “barky” but usually if your Dobie is barking, it’s because he’s trying to tell you something.

Will Dobermans turn on their owners?

There’s a myth about Dobermans to the effect that the brain can grow too big for the skull, with the resulting pressure causing the dog to go insane and “turn.” It is just that – a myth.

Your Dobie will happily engage in vigorous exercise and then snuggle up with you. Dobies love to sleep with their humans too, so if you’re getting a Dobie you might also want to invest in a bigger bed!

Which is better, Doberman or German Shepherd?

Both are large, powerful dogs. Both are highly intelligent, affectionate and loyal. German Shepherds are considered by some people to be more “kid-friendly” than Dobermans, but it’s a matter of opinion.

Did the Nazis use Dobermans?

They did. So did other countries, including the United States.

Although not typically considered “water dogs,” many Dobermans do enjoy swimming.

No dog is truly hypoallergenic. However, Dobies don’t shed very much and are among the better breeds for people who suffer from allergies to hair and/or dander.

Is a Rottweiler a family dog?

Rottweilers, like Dobermans, are intensely loyal and possessed of deep devotion to their humans. They make very good family dogs.

Are Great Danes good with kids?

Great Danes are gentle giants and usually very fond of human children. The main risk is that because of their size they could accidentally knock over a toddler.

Can Doberman Pinschers be service dogs?

Dobermans are often referred to as “dogs that can do it all.” They make very good service dogs.

Now that you know the facts about Doberman Pinschers, you can make the decision as to whether this is the right breed for you and your family. Loving, loyal and intelligent, the Dobie is sure to bring you much happiness!