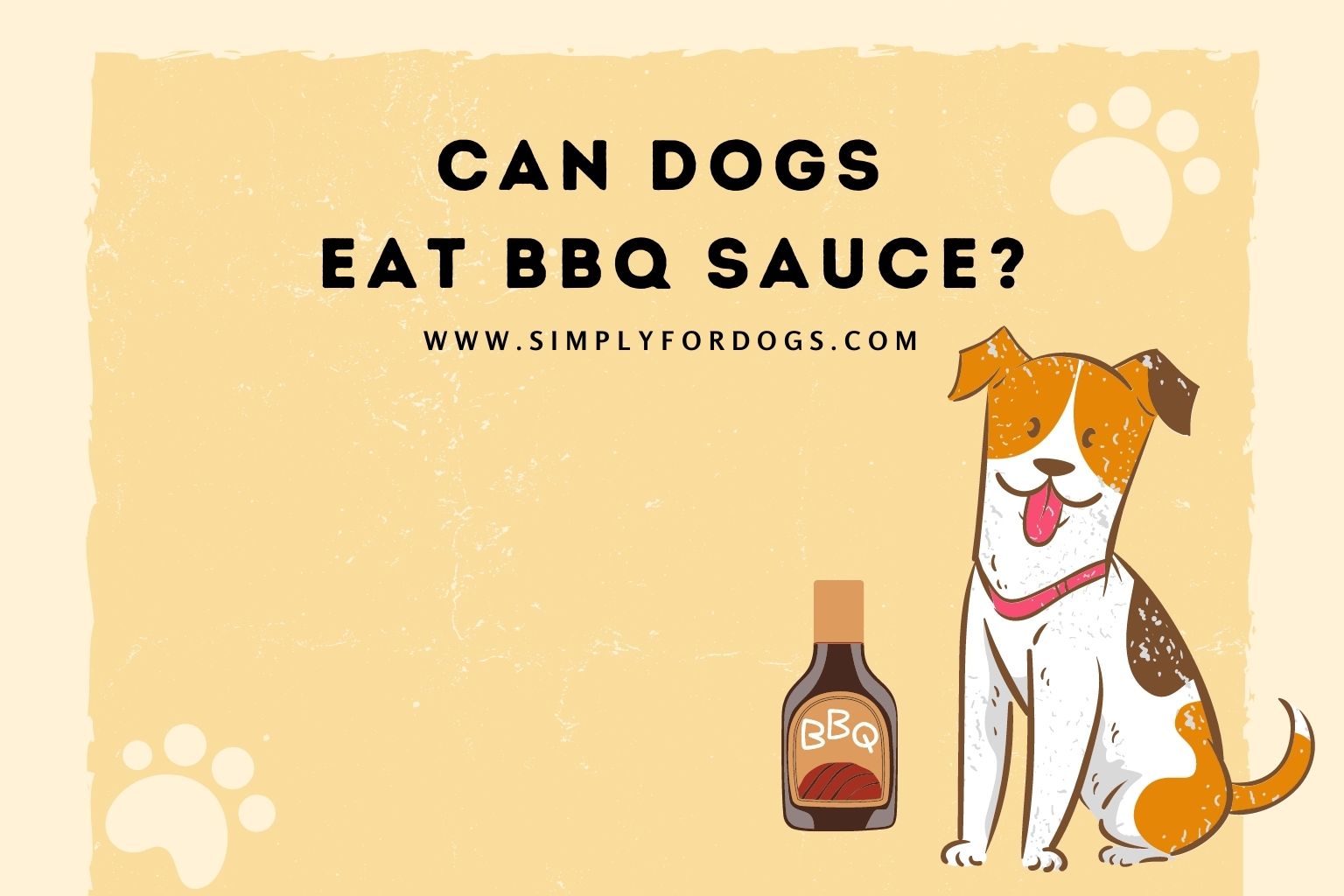 Every time you are busy preparing grilled chicken or beef ribs for dinner time, your canine companion is on the job of staring at you and the dinner you are preparing. He may also be craving the chicken marinated in the BBQ sauce. Or when you serve yourself a dinner plate having a tender and juicy steak along with some barbecue sauce, it may have crossed your mind whether you can give your dog bbq sauce along with the steak too. If not, should you serve him the steak alone?

Let’s see if the dogs can have BBQ sauce while enjoying some grilled meat in your company:

No! You should never let your dog eat barbecue sauce, even in small amounts. It is made using different types of spices, and ideally, any spicy human food should not be part of the dog food. In addition to spices, there are also added sugar, salt, onion and garlic powder, and other harmful ingredients in it. Some commercially available barbecue sauces also contain different types of preservatives and additives that are inappropriate for canine consumption.

If you want to let your dog eat some BBQ sauce, prepare it at home with all the dog-safe ingredients. Otherwise, the best option is to keep your dog away from barbecue foods. Instead, use healthy alternatives like boiled ground beef or a balanced meal containing two parts rice and one part blandly cooked chicken or salmon.

Before adding BBQ sauce to dog foods, consider the harm caused by its ingredients. Almost all the ingredients are unhealthy and cause several diseases. Let’s have a closer look at these ingredients:

Vinegar is among the main ingredients of all types of barbecue sauces. Vinegar in barbecue sauce helps tenderize the meat more readily so that it can be cut or shredded easily. Dogs can safely consume little amounts of vinegar, and it also has some health benefits for them. But high concentrations of vinegar, like those found in BBQ sauce, can give a dog an upset stomach. The acidic nature of vinegar can disturb the pH levels of the dog’s blood. Vinegar can be harmful to dogs that are already suffering from kidney disorders or gastric problems. Dogs with sensitive stomachs often show disease symptoms when they consume it. Before adding any vinegar-containing foods to the dog’s diet, you must consult the vet.

Peppers in BBQ sauce are not suitable for canine consumption at all. Spicy foods are dehydrating in nature. After consuming food that has a large amount of added spices, your dog will drink plenty of water which will cause fullness and nausea in him. Consumption of peppers will also result in your dog panting heavily, coughing, and sneezing.

All types of peppers, including black pepper and red and green chili peppers, contain a chemical compound called capsaicin. It has been associated with different digestive issues in dogs. This chemical causes irritation in the part of the body with which it comes in contact. This irritation results in a burning sensation in that area. When the food containing pepper passes through the digestive tract, capsaicin in the food irritates the lining of the tract. As a result, the gut of the dog will try to eliminate the food as quickly as possible. It will eventually lead to diarrhea.

Pet owners need to know the downsides of salt on dogs’ health. It has sodium in it that can result in salt poisoning in dogs. Signs of salt poisoning include lethargy, vomiting, and diarrhea. It can trigger frequent urination and thirst in them. The last stage of toxicity can cause seizures, tremors, and coma. At this stage, the chances of survival are less.

When the number of salts increases in the body, it can disturb the normal constitution of the electrolytes. This imbalance results in bones weakening, muscles pain, lethargy, and an increased heart rate. The dog may also feel difficulty in breathing and can be seen struggling for air.

Lime is a citrus fruit added to barbecue sauce to give it a tangy taste. It’s not safe to add lime in any dog food, let alone feed him BBQ sauce with spices and vinegar as common ingredients. Lime has psoralen and essential oils that can irritate the gastrointestinal system. The dog may undergo stress and can collapse suddenly. It drools excessively and develops high blood pressure and liver failure risks. The body might stop coordinating with the brain resulting in tremors. These compounds can also induce photosensitization in the animal. In this condition, if it sits in an open space under the sun, a sensation similar to that of sunburn arises. It can further lead to dermatitis and related skin issues.

Limonene and linalool are two other chemical components that account for this fruit’s strong smell and contribute to the lime’s toxic effects.

Many dog owners feed their pets with honey barbecue sauce. Though dogs can consume honey in small amounts, it is not safe to eat as part of BBQ sauce. It has high sugar content. Sugar is associated with causing dental issues, diabetes, and weight gain in dogs. These diseases make the dog susceptible to other health risks, including inflammation of joints, cardiac diseases, hypertension, and stones in the urinary tract.

Sugar-free BBQ sauces are not safe either. This is because they have a sugar substitute called xylitol in them. This compound is toxic to dogs and causes liver damage and seizures. Severe conditions can result in death.

Mayonnaise has been recently used as the base of BBQ sauce along with other ingredients. Avoid giving your dog this variety as mayonnaise is high in fat content. It can not only upset the stomach but can also cause pancreatitis when eaten in large amounts. The disease can further cause vomiting, diarrhea, pain in the abdominal region, weakness, and fever.

Mustard BBQ sauce is one of the most popular BBQ sauces out there. But dogs eating foods having mustard doesn’t seem okay. The mustard condiment is made from the seeds of the plant. Seeds are known to cause inflammation in the stomach and the surrounding areas. Commonly the animal experiences vomiting, diarrhea, and belly pain after ingesting it as the seeds contain isothiocyanate. There is scientific evidence to prove the toxicity of this compound. Recipes show it contains onion and garlic powder and other spicy ingredients like paprika in it. These ingredients make it worse.

Onion and garlic belong to the genus Allium, and both are toxic to dogs. The powder is made of ground-dried onions. Mostly it contains onion flesh but can also have roots and skin. All the parts are harmful to dogs as they contain N-propyl disulfide compound. This compound decreases the oxygen-carrying capacity of hemoglobin, resulting in decreased oxygen supply to the body organs. It can also reduce the count of red blood cells in the body, resulting in anemia. The presence of this powder in barbecue sauce can result in onion toxicity, the symptoms of which include extreme lethargy, white gums, and a decrease in appetite.

Is BBQ Sauce Bad for Dogs?

All the above discussion has shown that barbecue sauce is not safe for dogs. If a dog eats some of it, immediately take it away and give him a bland diet to eat. Then, with the appearance of any side effects, visit a vet. Stomach discomfort appears as the primary downside that can be treated with Pepcid AC, but not without consulting a veterinarian.

Barbecue sauce is not safe for dogs. It’s not just unhealthy, but many of the ingredients can be toxic. Keep the condiment out of the dogs’ reach. They might be totally fine after licking some from your dinner plate, but to protect them from further harm, do visit a vet.