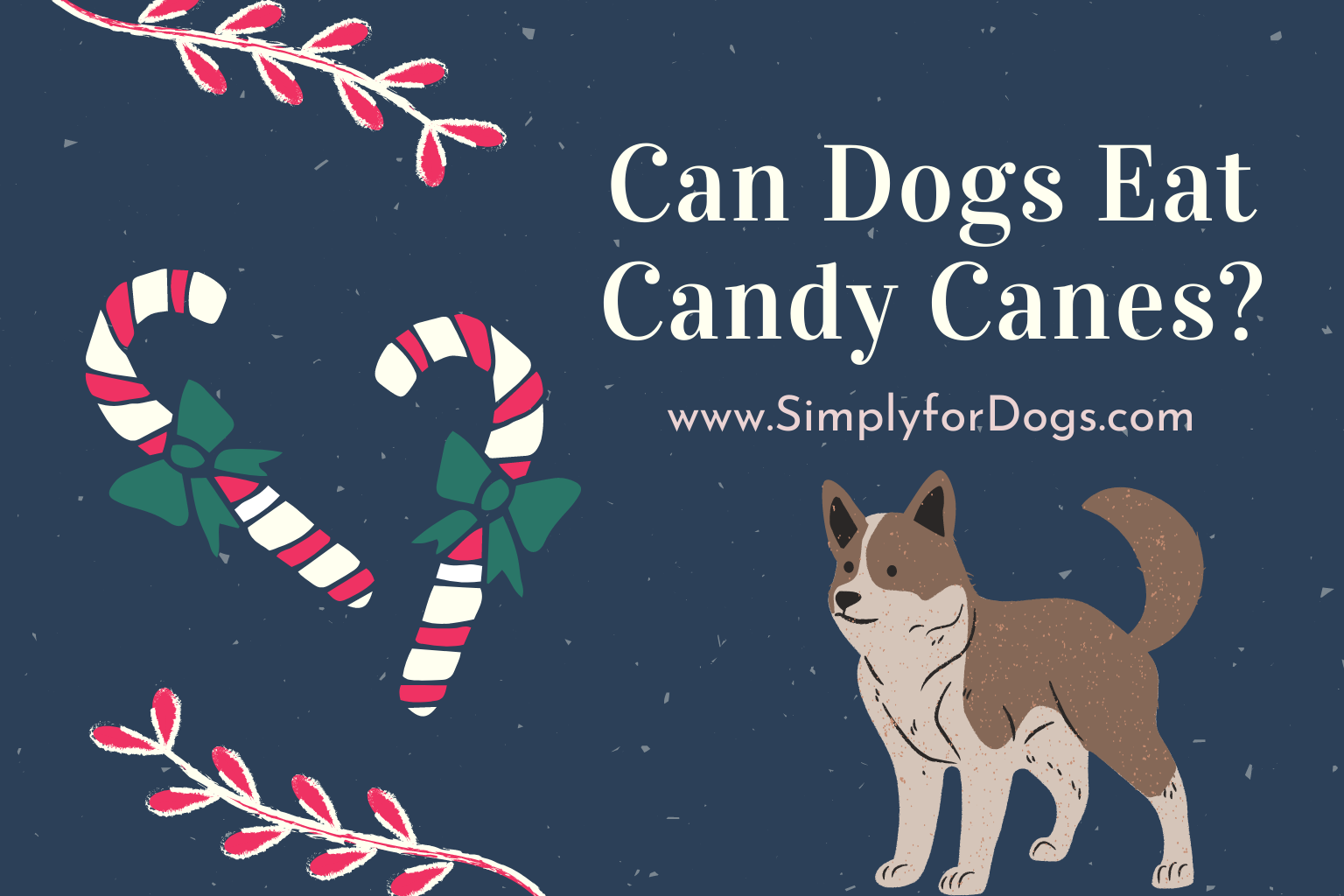 The list of sugar confectioneries is usually not complete without candy canes. Candy cane got its name from the shape of a cane. It’s also known as a peppermint stick because of its typical and traditional peppermint flavor. However, it comes in a variety of flavors and colors now. For decades, candy canes have been frequently used during Christmas celebrations. These are used to decorate the Christmas trees and make cupcakes, cookies, and ice creams.

If you have some leftover candy canes in your kitchen cabinet and want to use them in your favorite cake and ice cream recipes, you must be thinking of letting your dog have their taste. In such a case, if you want to know whether you can feed your puppy candy canes now or in the upcoming holiday season, read the article below.

There is no short answer when it comes to feeding your dog candy cane treats. Usually, candy canes don’t have any substance toxic to dogs, but they are unhealthy for them. So a question arises, what makes a candy cane harmful for dogs? Well! Its ingredients, my friend.

Let’s have a look at these ingredients and see how they are safe for human consumption but not for dogs.

The most popular candy canes are peppermint candy canes, with peppermint extract being the main ingredient. It is a herbal extract made from peppermint oil. Most of the time, it is derived from the leaves of the peppermint plant. Though natural, these extracts are toxic for dogs making peppermint candies unsafe for them.

If ingested, it can cause peppermint oil poisoning in dogs, similar to other essential oil poisonings. Peppermint extract can induce vomiting and cause excessive drooling, runny nose, watery eyes, lethargy, decreased body temperature, and a decreased heart rate in the dog.

Additionally, if the dog already has asthma or other allergic problems, keep the peppermint candy canes away from dogs. If your dog ate a candy cane while he had asthma, take him to a vet immediately to save him from any further harm.

If you see sugar as the ingredient of any treats, they are already forbidden to be added to a dog’s diet. The best practice is to keep sweets out of the dog’s reach as they can become addicted to them. Dogs have a sweet tooth just like humans, and once they become addicted to any sweet treat, it becomes difficult to keep them away from it.

An ordinary candy cane has large quantities of sugar and can disturb your dog’s stomach. Besides this, it can put your pet at the risk of the following health conditions:

Dog treats having too much sugar can add to your dog’s body weight. If your dog does not have enough physical activities in his routine, he can get obese to a dangerous level. Obesity makes the dog susceptible to numerous other diseases in the long term and thus decreases the longevity of his life. An obese dog can suffer from high blood pressure, cardiac diseases, and osteoarthritis. Chances of cancer and kidney stones also increase.

A dog owner should look for the signs like the invisibility of waistline, lack of grooming, difficulty breathing, and the dog becoming lethargic. These all are indications of obesity in its extremity and that it needs to be controlled.

According to Vetsulin, one in every 300 dogs is diagnosed with diabetes. Obesity is the major cause of this disease in dogs. Naturally, the dog’s body produces insulin that lowers the blood sugar level and brings it to normal levels. But when a dog becomes obese, his body fats release a hormone that suppresses the function of insulin, and the dog becomes diabetic. In addition, not controlling the amount of sugar in a dog’s food can put him at the peril of other health hazards.

Though dogs rarely have cavities and dental issues, they can develop these if continuously fed with sweets or other high-sugar foods. Candy canes are no exception from becoming the cause of dental problems in furry friends. Plaque can build up, and the bacteria in the dog’s teeth can add more to the damage. In addition, he may suffer from pain in his gums and jaws. Due to pain in the mouth, he will not like to eat anything, and it will lead to a decreased appetite. Severe dental problems can result in a dog not eating at all and becoming lethargic and weak.

Corn syrup is made from the starch of corn and contains some important carbohydrates, including glucose, maltose, and other oligosaccharides. It has nothing toxic inside it but is never recommended to add to dog treats. It is because it causes the same harm as sugar does. It puts the dog at the hazard of obesity, diabetes, and dental problems. Some experts even say that corn syrup is worst than sugar.

Different manufacturers make use of synthetic food dyes to give candy cane bright colors. Although these dyes do not harm the dogs, some sensitive dogs may show signs of hyperactivity or allergy due to the frequent consumption of foods with artificial colors.

Never let your dog eat a sugar-free candy cane. Sugar-free human treats have an artificial sweetener called xylitol in them. The compound is safe for human consumption but is toxic for dogs. It causes xylitol poisoning in dogs, symptoms of which include vomiting, weakness, incoordination, and seizures. It stimulates the production of insulin that suddenly lowers the blood glucose level, resulting in a condition called hypoglycemia. It can be life-threatening if it becomes severe. Xylitol has a slight laxative effect as well. It attracts a lot of water to the dog’s stomach and can cause diarrhea. Symptoms of xylitol poisoning can appear within 15 to 30 minutes after it is consumed.

No, dogs shouldn’t be given candy canes having chocolate in their ingredients. Chocolates contain theobromine and caffeine. Although both of these ingredients are not metabolized effectively by a dog’s digestive system, the major risk is due to theobromine. This toxic substance causes a condition in dogs, which we commonly call chocolate poisoning. The symptoms of this poisoning are commonly diarrhea, vomiting, cardiac dysrhythmia, and sometimes tremors as well. In addition, the repeated ingestion of chocolate by a dog can lead to cardiomyopathy, in which the cardiac muscles lose their potential to pump blood to the body. But in the end, it’s the dose that makes the poison a poison. The same goes for the chocolate poisoning in a dog eating these candy canes.

The Harm of Candy Canes

The sweet smell of peppermint in candy canes will surely attract your pup, but this sugary treat can pose several harms to your dog’s health. Pet parents might think that if dogs chew one candy cane, it won’t harm them. But in fact, a single candy cane can pose a choking hazard and turns out to be dangerous due to its sharp edges.

Given the shape of the candy cane, it can easily be stuck in the throat and cause choking hazards like ingestion of any other foreign object smaller than the windpipe would do. In addition, these hard candies are difficult to chew on, and dogs swallow them without masticating them into pieces. As a result, they obstruct the windpipe and result in breathing difficulty. Though the safest way is to seek a vet immediately, one should know how to handle a choking dog in an emergency.

When a dog bites a candy cane, its sharp edges are formed. It can cut through the dog’s throat, causing injuries. Ingesting it further can also hurt the dog’s esophagus and cause gastrointestinal problems when eaten. Signs of internal injuries include a hacking cough and a bloated belly. If not treated timely, it can result in internal inflammation and ulceration, with the condition becoming harmful for the dog. Contact a veterinarian as soon as possible. Don’t make attempts to self-medicate your dog in such a case.

The bent shape of these candies can also pose a choking hazard to dogs. If a dog ate one or a few candy canes, look for the symptoms like an upset stomach, gas, difficulty breathing, and other symptoms. As soon as any symptoms appear, take the dog to a veterinarian.