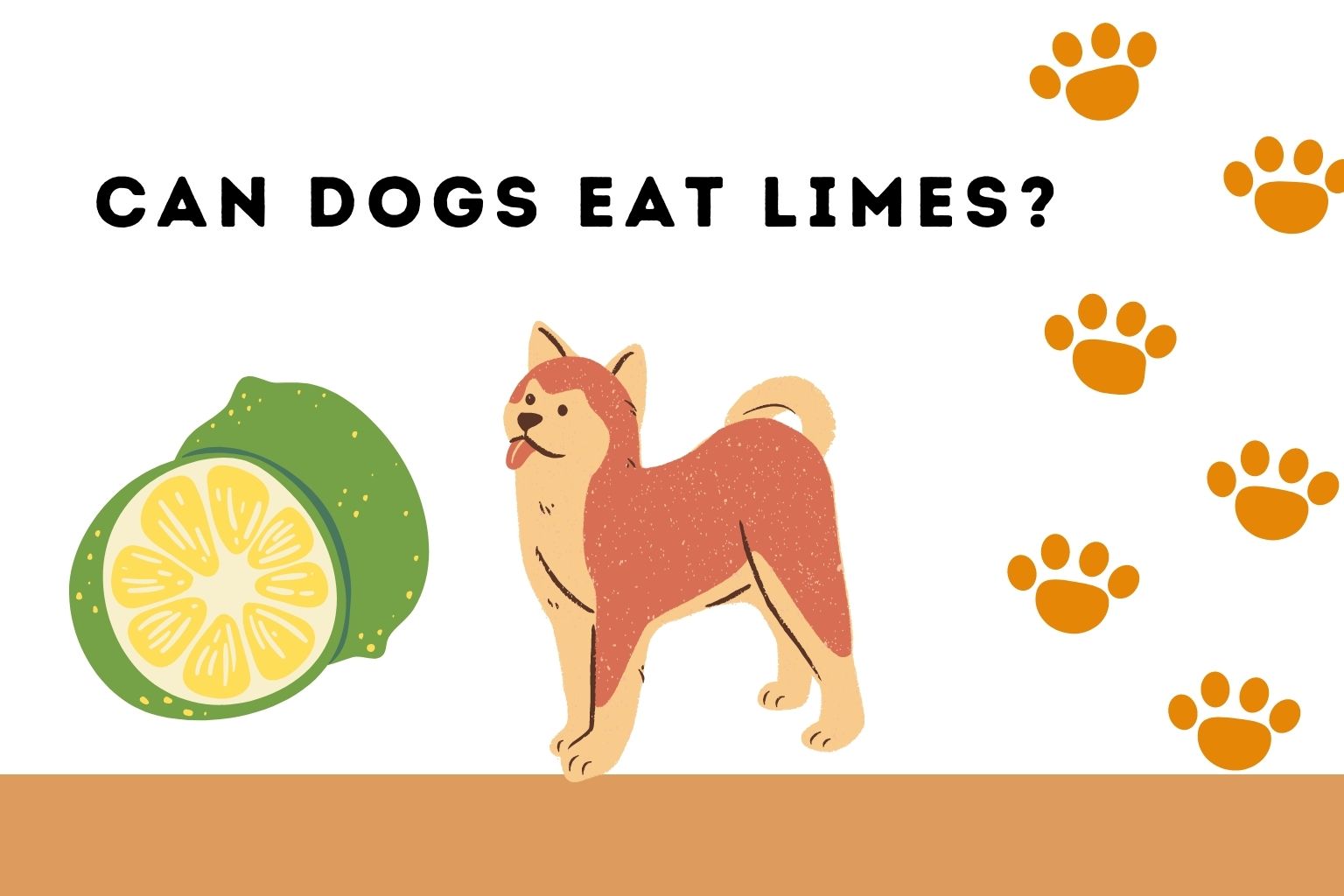 Humans have always been fond of making their food sour and spicy. Lemons and limes serve this purpose. Besides it, these fruits have been used in many drinks like limeades, lemonades, lime cocktails, and many other Summer drinks. Pet parents wonder if they can share them with their pooch, so let’s find out.

No, lime is not safe for dogs. All the parts of lime trees are toxic to dogs, including the lime leaves, seeds, peels, and flesh. The major hazards to the dog’s health have been brought by peel and flesh.

Lime peels are high in dietary fibers. The amount is between 61-69%. It’s more than a dog can have as a daily requirement. Though fibers are necessary for the dog’s diet to ease digestion, too many fibers can result in a contrasting condition. It can make the absorption of minerals difficult and can also lead to diarrhea.

The flesh of these citrus fruits is highly toxic to dogs. The reason for this toxicity is the presence of aromatic oils or essential oils limonene and linalool along with a compound called psoralen.

Limonene is a toxic compound that can cause liver failure as well as damage the kidneys. Kidney damage by limonene results in proteinuria (a large number of proteins in urine that should ideally have been in the blood). Linalool has way more toxic effects. It lowers blood pressure causes diarrhea, vomiting, depression, and muscle tremors. In addition, it decreases the body temperature below normal, resulting in hypothermia. This condition can damage the brain, respiratory system, and the normal functioning of the heart.

Psoralen is a phototoxic compound. It can cause skin cancer and makes aging faster. In addition, it can blur the vision of the dog, making the eye lens cloudy in a condition called cataracts. The risks of sunburns are also increased. The same goes for other citrus fruits such as lemons. The presence of these compounds makes lemon and lime toxic to dogs.

Can Dogs Have Lime Juice?

Lime juice or limeade is made from freshly squeezed limes, sugar, and water. Although it is rich in Vitamin C, the high amounts of citric acid in lime juice are what make it inappropriate for canine consumption. Citric acid is likely to cause bloating in the stomach of your furry friend, and its intake in excessive quantities can lead to disorders of the nervous system in him.

The second ingredient which should never be part of your dog’s diet is sugar. Fruit juices are rich in added sugars, leading to different problems in dogs. They become susceptible to weight gain, hypoglycemia, liver dysfunction, and dental issues. You should be very careful about adding sugar to your dog’s food, especially if he is diabetic.

Lime and lemon can cause a lot of health problems. Anything can be expected after its ingestion, from a mere stomach upset to a serious threat of lime poisoning in dogs.

Limes are not good for the digestive health of your pooch. If a dog eats lime or drinks lime juice, he may experience acid reflux in his stomach. This reflux is due to high concentrations of citrate in them. The acidic chyme of his stomach will flush back into the esophagus, causing pyrosis or heartburn. Other symptoms may include nausea, vomiting, and difficulty in swallowing.

The acidity of lime can also induce peptic ulcers and decreased mucus production by the lining of the stomach. In addition, the essential oils in lime can irritate your dog’s stomach. It will end up in the form of diarrhea. Moreover, studies have shown that dogs who consume lime frequently experience bloating in their stomachs.

Lime poisoning in dogs is very common. The reason behind this toxicity is the body’s strong reaction to the essential oils and psoralens. The symptoms of lime poisoning include excessive drooling, diarrhea, vomiting, lethargy, tremors, and low blood pressure. A sudden fall in body temperature usually follows these symptoms. It can also make the dog collapse.

This condition occurs when phototoxic compounds like psoralens, found in the lime trees, and limes come in contact with the skin. When the skin is later exposed to ultraviolet radiations of sunlight, photochemical reactions occur, causing the skin to become swollen and painful. In addition, blisters form on the skin, which is followed by skin irritation, edema, and hyperpigmentation.

What If My Dog Has Eaten Some Lime?

A dog eating a lime is too rare. Most dogs don’t like to eat limes because of the sour taste. But it doesn’t mean you can leave the lemon or a lime carelessly as it can activate the dog’s instinct to taste everything. If you think your dog ate lime in a small amount, carry on with regular monitoring and check for symptoms of ill health. As soon as the symptoms arise, take him to a veterinarian immediately and don’t try to self-medicate. The vet immediately might induce vomiting in him and administer IV fluids to compensate for the loss of electrolytes from the body. He might carry out gastric lavage and clean his stomach off the toxic substances. To treat gastrointestinal upset, he might give him activated charcoal. Hence, to save vet bills, avoid feeding your dog lime or lemon.

What If My Dog’s Skin Was Exposed to Lime?

Psoralens are rich in citrus plants, including the lime tree. These phototoxic agents are also found in lime leaves. If and only if your dog’s skin has been accidentally exposed to the fluid of lemon or limes, he is at the risk of developing phytophotodermatitis. Symptoms include painful inflammation and blistering of the skin. These symptoms may appear a few hours or days after the dog has been initially exposed to sunlight.

Prevention is always better than cure. If you have a lime tree in your garden, don’t let your dog wander near it. The best practice is to avoid your dog’s exposure to sunlight if he had accidentally contacted psoralens. Wash his coat immediately with mild soap and tap water to remove any phototoxic agents. Apply topical steroids on his skin after consulting with your vet if symptoms appear. You can also apply cold compresses to reduce pain and inflammation. Keep your dog away from heat and moisture; they can make the reaction even worse. If the fluid from limes has contacted his eyes, it can cause temporary blindness. In such a situation, you must rush to your vet immediately.

Many pet parents feed their dogs with these sour citrus fruits just because they are a great reservoir of vitamin C. Though vitamin C is an essential requirement of a dog’s body, the harms caused by essential oils and psoralens dominate the health benefits provided by the vitamins. So, it’s better to keep lime out of the dog’s reach.

Vitamin C is an important scavenger of free radicals produced during metabolism. Without it, oxidative stress would increase to a toxic level. It also produces collagen that protects the dog from diseases like hip dysplasia and arthritis. Though a dog’s liver produces some vitamin C in most cases, it is not sufficient to carry out its role as an antioxidant. The addition of the following foods to his diet may fulfill this purpose: tomatoes, carrots, sweet potatoes, pumpkins, broccoli, and kiwi fruit. In fact, many dogs love eating these fruits.

Citrus fruit like lime or lemon is not safe for your pet. Even a small amount can be toxic. It is because of essential oils like limonene, linalool, and psoralens. These compounds are not toxic for humans but are toxic for dogs. They cause many health problems in them. Dogs can develop lime poisoning after they eat these sour citrus fruits in large amounts. Severe poisoning can even become the cause of their death. In addition, this fruit harms the pet upon ingestion and irritates the furry coat when it comes in contact with it. It can also result in phototoxicity, which causes the sensation of sunburn and many other dermal issues.