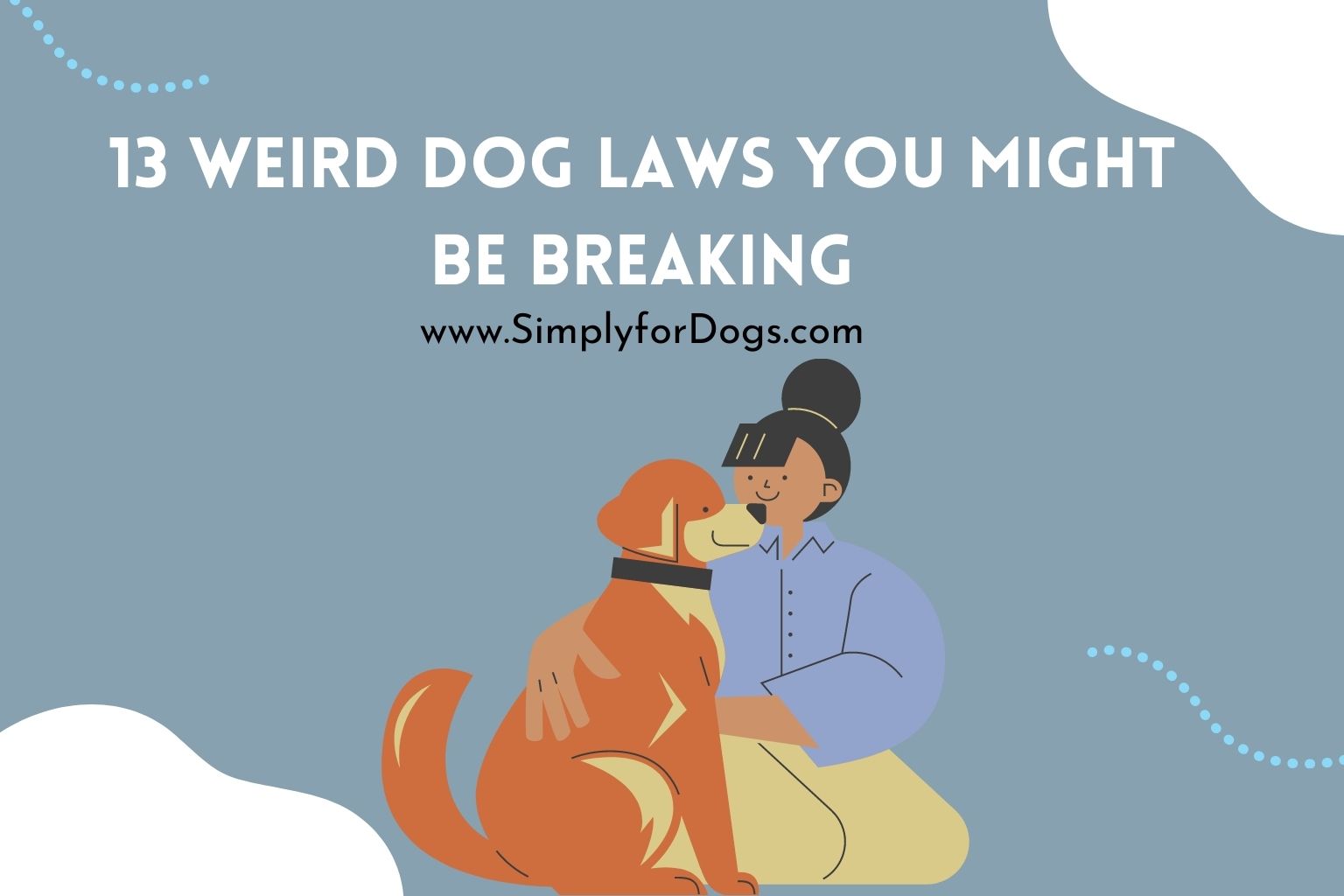 Hey readers, it’s Ash. Level with me: Have you ever broken the law? Most of us have at some point in our lives. I mean, if you’ve ever set the cruise control just a couple of miles over the speed limit, you’re technically guilty. And what about rules that you didn’t even know existed? For example – did you know that it’s a federal crime to throw away junk mail that comes to your house if it’s addressed to the last person who lives there? Even if it’s clearly just a bit of spam, that still counts as tampering with someone else’s mail. Crazy, right?

Today I wanted to talk about some weird dog-related laws that you might be breaking without even realizing it. I can’t quite recall how I stumbled onto this topic, but I’ve been collecting strange anecdotes about dog laws for a few years now. Some of them are just silly and make me laugh – others are so oddly specific that I wish I could hear the story behind how they became laws. But all of them are bound to make you shake your head in disbelief.

If you own a dog in the city of Turin, in Italy, you can face a fine of up to $650 for not walking your dog at least three times per day! If you can’t get home to walk your dog midday, you’d better be sure to grab the leash and get in two morning or evening walks in, in addition to that third one. Granted, this law is great for dogs, but it does seem a bit excessive for dogs that don’t need so much exercise. Think of it as a good excuse for getting in your own steps!

In Anchorage Alaska, it is illegal to strap your dog to the roof of your car. This law makes me chuckle, but it’s also a bit horrifying. You know that someone, somewhere, did this at least once, and that’s what made the law necessary. My question is, who ever thought this was a good idea? Always be sure you’ve got your dog in a safety harness designed for the car to keep them safe – INSIDE the vehicle.

In the state of Connecticut, it is illegal to “educate canines”. Now, I’m sure that doesn’t mean you can’t take your dog to a puppy kindergarten class for training. Instead, I believe it means that dogs are not allowed to go to human schools. I’m willing to bet that this one was due to the acts of some pranksters trying to get their dog an Ivy League degree, but we may never know. Want your dog to be a smartie pants? Try working with him to respond to clicker training – you’d be amazed what your dog can learn with this simple training tool! Some dogs can even learn to recognize thousands of human words and complex sentences, so don’t think that college is the only route to academic excellence for your dog.

Chalk this one up to one of the dumbest laws I’ve ever heard. Apparently, it is illegal for dogs to bark after 6 P.M. in Little Rock, Arkansas. Just how do they enforce that, anyway? And don’t they realize how dangerous it could be for a dog that is protecting its family from a midnight intruder if he can’t bark? I’m sure the law is in place to give neighbors a way to put a stop to excessive barking, but I still don’t quite understand how they can call this one a humane law. After all, you wouldn’t tell people that they have to stop talking after 6 P.M.! If you struggle to get your dog to stop barking after a specific time, try giving him something to chew on, like a Greenie. That should keep his mouth busy so that he can’t bark, and it’ll also give him nice breath as a bonus.

There are two laws in Chicago that make me chuckle. First, and this one is so specific that I had to do a head tilt, French Poodles are not allowed at the opera in Chicago. Just French Poodles. Want to take your Boston Terrier, go right ahead, but that Poodle better not be an opera lover, or he’s out of luck.

The second law from the Windy City is that it’s illegal to give a dog whiskey in the city limits. There go my plans for Leroy and Janice’s next birthday bash. I guess I’ll just stay home and give them some beer biscuits instead! Seriously, though, don’t ever give a dog any kind of alcohol. It could be poisonous to their system. Those beer biscuits are actually made with the cast off grains from a brewery and do not contain actual beer.

Landlords, Dogs and the Law
7 Odd Dog Laws You Don’t REALLY Need to Know About…But Might Find Interesting!
The Law Regarding Dog Bites and Other Injuries

Did you know that in Paulding, Ohio, it is legal for a police officer to bite a dog in the line of duty? This seems like a horrible idea to me. Dogs don’t react kindly to anyone getting into their personal space, and biting a dog probably isn’t going to shut him up. But tell that to the people of Paulding, I suppose. It would probably be a better idea for the police to carry sometasty treats – it’ll quiet a dog down much easier and be safer for everyone.

In the town of Wanessa, New Jersey, it is against the law for dogs to cry. I imagine this rule probably started as a way to allow neighbors to complain about dogs that whined or howled when being left alone, but the wording is just silly to me. No dog may ever be sad in Wanessa! Only happy dogs allowed! So you’d better be sure to spoil your dog with lots of fun toys and attention, or else.Other ways to keep your dog from “crying” during the day when you are at work include making sure they are getting a lot of exercise (so they nap during the day), making sure they aren’t suffering from any illnesses or injuries that you may not have known about, and making sure to give them lots and lots of attention.If your dog suffers from separation anxiety, consider a tool like a thunder shirt, which has been shown to help dogs feel calmer.

Yes, you read that right. In Oklahoma, it is against the law for people to make ugly faces at dogs. There are even recorded instances of this law being upheld. The people who were convicted faced fines, and there is even a record of a person being sent to jail for this! Whatever you do, make sure you always smile at dogs in this state! I can only imagine some dog-obsessed judge creating this rule a few decades back and being shocked that it actually stuck, but who knows how this law got its real start.

(9) Only Dogs in the Kennel in Idaho

In the city of Wallace, Idaho, no person is legally allowed to sleep in a dog kennel. My instinct says that this law probably has a very sad origin having to do with child abuse, but the wording of the law is a little silly. Without context, it seems very odd indeed to ban humans from sleeping in a dog kennel. But I bet your dog will be happy that he has a little less competition for the best spot in the joint. Teach your dog to love his kennel by letting him claim it as his own personal, private space, and you’ll have a much easier time with travel, pet sitting, and emergencies. A comfy dog bed inside the kennel is a great way to entice him to turn it into home.

Here’s an interesting law from Denver that is actually in practice, and is pretty funny. Dog catchers have to give stray dogs a written notice on a tree in a city park or along a public road for three consecutive days before they can legally capture them from the area. Now, all this law really means is that there are permanent signs in place stating that stray dogs will be dealt with accordingly. But it’s hysterical to me that the law states that this notice has to be posted for the dog’s benefit – as if the dog can read the eviction notice!

Chicago isn’t the only city in Illinois with some strange dog laws. Here are two more that have me scratching my head.

In Galesburg, it is illegal to keep a smelly dog. If your dog starts to get a bit ripe, you’ve got to find some smell-good shampoo and fast – or face fines. I’d recommend keeping some waterless shampoo on hand to give your dog a quick rub down if he’s ever in public, just in case.

And in North Brook, it is illegal for dogs to bark for more than 15 consecutive minutes. So be sure to whip out your timer when your dog is alerting you to an intruder because after 15 minutes, you could be fined! Seriously, though, if you have a hard time with your dog barking for extended periods, he may need something to occupy his mind. Try giving him an interactive toy to play with, or take him on longer walks to wear him out, so he isn’t as easily excited. You may also want to be proactive about bringing him inside when you know the mailman or garbage truck is coming.

(12) Minnesota is Trying to Make Cats and Dogs Get Along

There are actually several towns in Minnesota that have laws that basically make it illegal for cats and dogs to fight. I’m not sure what happens if this law is broken, but I’m assuming the owners will be fined. The question is – which owners? The cat owners? The dog owners? And in the town of International Falls, we get an even more specific law. It’s illegal there for cats to chase dogs up telephone poles. Yes, you read that correctly. If a DOG is up a telephone pole because of a CAT chasing him there, someone has broken the law. Again, I’m not sure if it’s the cat or the dog that’s in trouble, but I can’t stop laughing at the image.

(13) North Carolina is On Board with Cat and Dog Love, Too

In Barber, North Carolina, it is also illegal for cats and dogs to fight. I would suggest socializing your dog with cats very early to ensure that he never accidentally ends up a felon. Maybe it’s for the best that cat lovers and dog lovers don’t mix in this town. If you must combine the two, it’s best to start slow with the introductions. Keep your dog and your cat in separate parts of the house, and start alternating which parts they get to hang out in so that they get used to each other’s smell. Then you can slowly begin allowing them time together in the same space until they have reached some kind of truce. You may find that your dog and cat become best buds, but at least this way, they’ll have learned to tolerate each other, so you don’t end up a criminal.

You’re Probably Not Breaking Any Laws, But Just in Case

These 13 laws make me laugh, or sigh, or wonder at just what we humans are doing with the legal system. I mean, do these laws really need to be on the books? Some are just downright silly, while others are so specific that you can’t possibly imagine they have happened more than once in the same town.

But no one ever said humans made sense.

Landlords, Dogs and the Law
7 Odd Dog Laws You Don’t REALLY Need to Know About…But Might Find Interesting!
The Law Regarding Dog Bites and Other Injuries