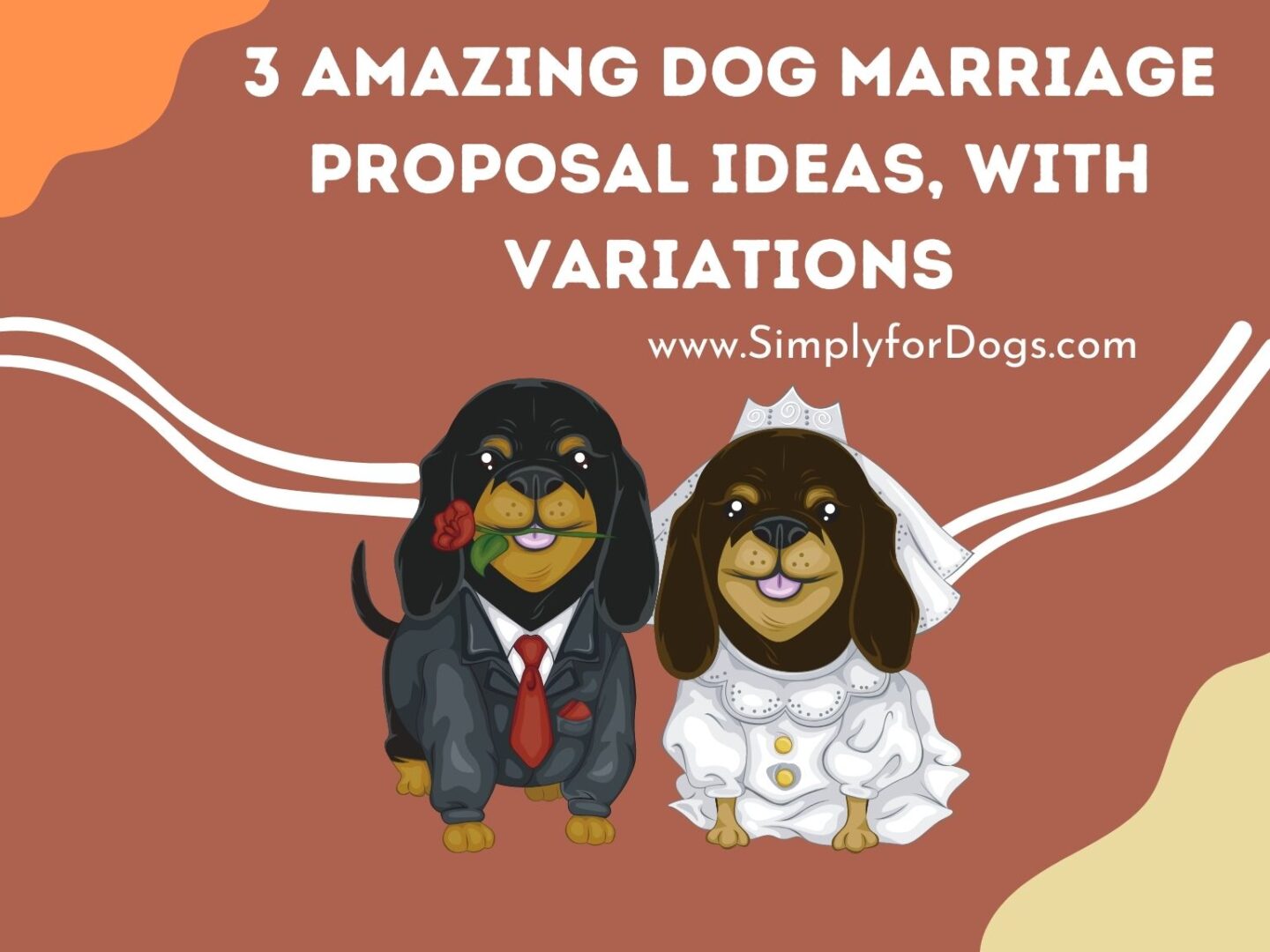 Proposing marriage is probably going to be the most important thing that you’ll ever do in your life. You’ve made the decision; this is the person you want to spend the rest of your life with. So, you want to make it special.

Some people rent the Jumbotron. Others hire sky writers. There are a million ways of going all out.

For my money, though, I can’t think of anything better than having your dog help you pop the question.

It would seem, too, that I’m not alone. Lots of people want to bring their dog in on the act.

Here are the three usual ways of asking your beloved to spend the rest of her life with you. I’m also adding some variations.

The classic marriage proposal involves offering a ring, and saying “Will you marry me?”

A lot of people like to take the “classic” a bit further, and tie an engagement ring around a beloved dog’s collar. I love this idea! It’s perfect in its classic form, but you can take it a bit further.

One very simple way of “switching it up” is to use a floral collar or a ribbon instead of the dog’s usual collar. Your loved one will think, “Why is Charlie wearing that collar?” and then once he approaches her, she’ll see why.

You can take this a step further too, by setting up flowers and music before the proposal. Then, have your dog come in, wearing the special collar. Maybe even add a special note saying “Charlie wants you to marry us.” If her heart doesn’t melt, then she’s made of stone and you should find someone else!

Another way of adding a bit of intrigue to the classic “collar” dog marriage proposals approach is to wait until she and your dog come back from a walk. Beforehand, set up a “trail” of treats leading to one special room. Obviously, the dog is going to follow the trail of treats. Then, when the treats run out, you’re there, with your dog running over to your side, and you’re saying to her, “Charlie has led us here, to this point in our lives. Will you marry me?”

If you want to really, really surprise her, just pick a time at random. Tie the ring around Charlie’s neck, and tell him, “Go wake Mom.”

This is something like the “Classic,” but a little more refined. What you do with “message” dog marriage proposals is buy personalized dog tags. Engrave a tag with the message “Will you marry me?” and then send your dog off to deliver the message. You can create a surprise by saying something along the lines of “Hey, I got a new tag for Charlie – check it out!”

If you want to do something a little more “over the top,” you might set up a banner down at the dog park, saying something along the lines of “Will you marry me and Charlie?”

Or, you could go totally cheesy and have a sweatshirt made up saying “Marry me and Charlie!” Wear it to the dog park.

If you’re “outdoorsy,” you might think about a couple of the following dog marriage proposals. In other words, taking your loved one off for a picnic. I actually had a couple of friends do this. John took Shayla off to the woods for a hike with their dogs, and at a certain point, he sat her down and said “The dogs have something they want to say to you.”

They had three dogs, Ace, Beulah and Kory. John called Ace over. He was wearing a blue tag with the word “Will.” Then he called Kory over, and Kory was wearing a pink tag saying “You.” By this time, I think Shayla might have been cluing in, but when Beulah came over with the tag saying “Marry me?” you bet she got the idea!

I thought that was so wonderfully adventurous! Of course it wouldn’t have worked if the dogs hadn’t been perfectly trained, so if you want to try this, train the dogs first!

If you want to go the “adventurous” route more easily, of course, you can just pick a good site for a picnic, set out some flowers and allow your dogs to stand by.

Well, I’m not sure if dog marriage proposals work all that well without dogs.They can be done, though. Maybe you have a friend who has a dog. Or, you could find a breeder who’s just had a litter, and you could borrow some puppies. The approach is something like what I’ve just outlined. You tell your significant other that you know someone whose dog has just had a litter. You want to visit the puppies. Then, you do the routine of “Oh, look, isn’t this one cute? What does his tag say?”

You get the idea, and you know what the tag says! Depending on how many puppies there are in the litter, you could get some tags (different colors so you know which one to pick up first), Then have the tags engraved with individual words. Pick up the puppies one by one, having her read the tags: “Will,” “You,” etc. A proposal with puppies is sure to melt her heart!

The other really cute thing you can do, if you don’t have a dog but you and your significant other want one, is to post an ad in a local “buy sell and trade” paper. It could read something like this – “Wife wanted. Must love dogs. Check out the “dog wanted” ads and then call me [insert name of significant other]. I’m here and waiting!”

I can’t imagine anything more wonderful than including your dog in your wedding! It’s such a happy time, and sharing it with a beloved dog just makes it that much better. Wouldn’t you love to have your dog participate in your wedding? These are some of the ways that you can make that happen. Maybe you have other ideas- leave a comment and let us know how you included your dog in your wedding, or how you want to include him.