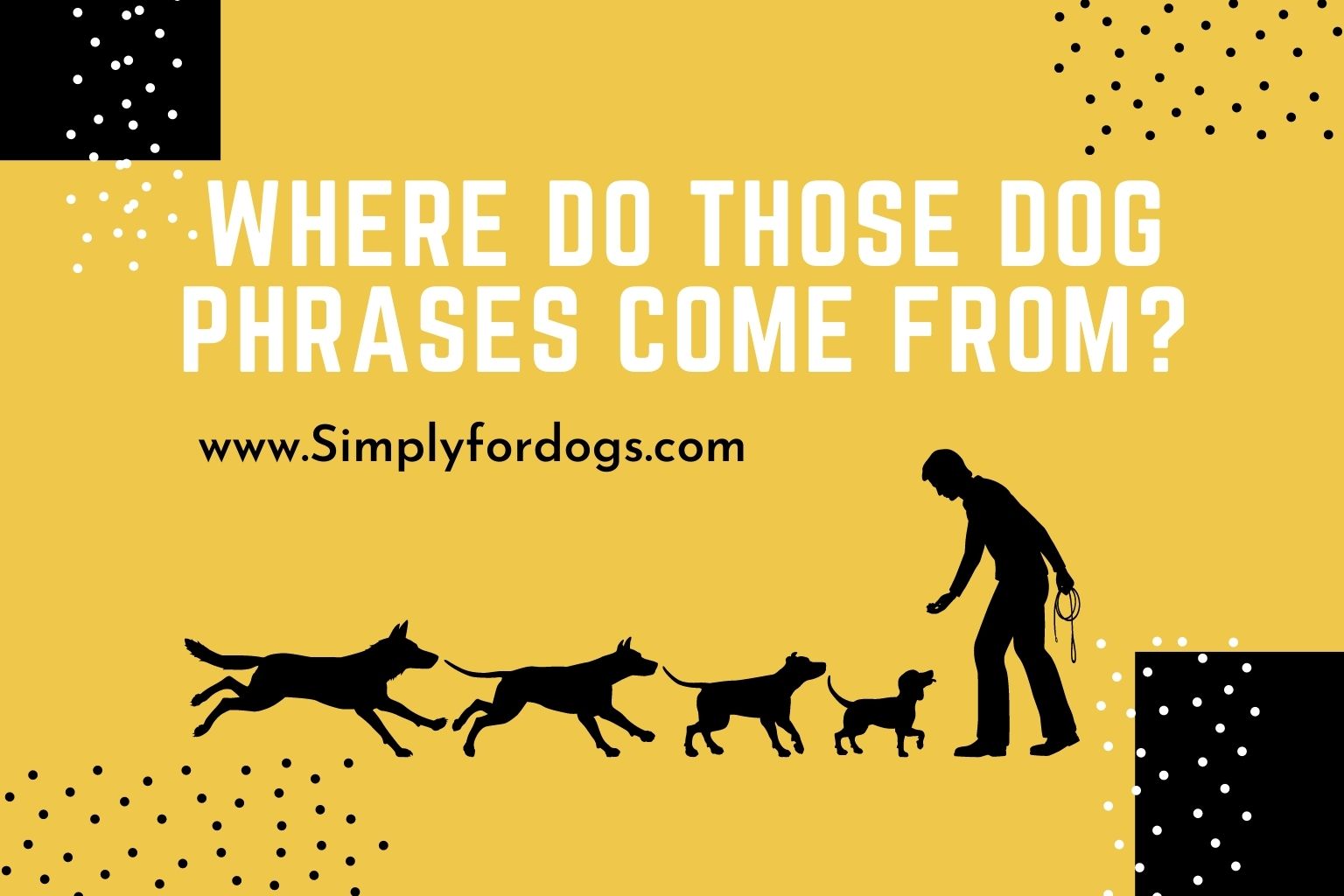 I was at the dog park this morning when Al and Hannah came by. Al didn’t look so good, so I asked him if he was okay. He responded with “I’m sick as a dog. Been throwing up all night, but Hannah has to get her exercise. I just hope I can get through it.” Of course I offered sympathy, and said I hoped he’d feel better soon. But then I got thinking – and of course it’s the oddest things that get me thinking – where do these expressions come from?

So many of our common sayings have to do with dogs, and that’s not surprising, given the role they’ve played in our lives practically since the dawn of man. You’ve heard them – “That dog won’t hunt,” “It’s all gone to the dogs,” “It’s a dog eat dog world,” and yes, “Sick as a dog.”

I could go on and on, but I think in the interests of brevity, I’ll narrow it down to just half a dozen sayings. They’re the ones that puzzled me the most, and got me to Googling vigorously to find out what they meant. Here goes!

Every Dog Has Its Day

I had no idea that this originated in a poem. It was called “Young and Old,” and is from the “Water Babies Collection” by Charles Kingsley. Kingsley wrote “Young blood must have its course, lad / And every dog his day.” It’s been a bit corrupted over time into “Every dog has its day.” What it means, essentially, is that even the most mundane life will have at least one memorable occurrence. So if you feel like you’re just slogging through life, and nothing special is happening for you, take heart – your day will come!

Today, most of us have ways of cooling off in the summer heat – electric fans, air conditioners, our backyard pool, etc. But it wasn’t always so easy. Before modern conveniences, humans had to fan themselves by hand in what was often a futile attempt at warding off the oppressive heat of the mid to late summer. Dogs would try to find a bit of shade close to their humans, and both dogs and humans would do precious little other than just try to stay cool. July and August became known as the “dog days of summer.”

Of course it’s very important to keep your dog cool in the hot weather, and warm in cold weather as well. For more on this, read Can Dogs Live Outdoors Full Time?

25 Quotes About Grief and Pet Death
Do Dogs Understand Language?
What is Your Dog Trying to Say?

If you’re of a certain age, you have just begun belting out “Jeremiah was a bullfrog…” But no, in this instance, Three Dog Night does not refer to the popular 1970s band of the same name. My friend Neila, who is up to her armpits in Rottweilers, often says as winter approaches, “Feels like a three dog night.”

There is some debate as to whether the phrase originated in the Arctic, with the Eskimos, or in the Australian outback, although most researchers seem to think that the Arctic is the more likely choice. Sled dogs would have been brought into the igloo to keep their owners warm at night. Often, one dog wasn’t enough. Two dogs would have been needed much of the time. And if you had a three dog night, well, that meant it was cold to the point where you could freeze to death unless you had a pile of dogs to snuggle up with.

The first known record of this phrase being used was in 1651, and attributed to the British poet, Henry Vaughn. A year later, playwright Richard Brome also used the phrase. The exact origin is not known. Some researchers believe it may go back to Odin, who was the god of storms, and was accompanied by wolves and dogs. Others believe it dates back to medieval myths of witches, who had cats as familiars and were known to fly through the air even in violent storms.

It may also have something to do with the natural tendency of cats and dogs to seek higher ground during heavy rain. It is not unreasonable to think that occasionally, a cat or dog might have been swept off a rooftop during a particularly vicious storm, and it may actually have appeared to those below that it was literally raining cats and dogs.

Gotta See a Man about a Dog

This is a way of saying that you have to go and do something, without actually specifying what it is you need to do.  The expression is believed to have originated during the prohibition era, when it referred to illegally buying alcohol. It also sometimes meant a visit to one’s bookie – something that wasn’t exactly socially acceptable. Today, people sometimes use the phrase as a substitute for “I need to go to the bathroom.”

This is a wonderful, all-purpose phrase that clearly indicates that whatever you’re up to, you don’t want to be questioned about it. It is still considered impolite to ask for clarification when someone tells you that they’re off to “see a man about a dog.”

25 Quotes About Grief and Pet Death
Do Dogs Understand Language?
What is Your Dog Trying to Say?

Realistically, most dogs don’t work all that hard, if they work at all. Unless you consider sitting to get a treat hard work, or think that offering a big wet kiss in exchange for a tummy rub is particularly onerous. When we humans use the phrase, it may indeed mean that we have worked very hard. As in, for instance, “I worked like a dog today landscaping my yard.” The phrase is also often used to describe low-paying jobs. “I work like a dog for that jerk, and he just pays me minimum wage.”

Given the little that we demand of our dogs, if you really work like one, you probably have a pretty sweet deal. Most likely, though, you do a decent day’s work, and you work a fair bit harder than your dog does. You need a [easyazon_link identifier=”B01FW4KBAM” locale=”US” nw=”y” nf=”n” tag=”natur0da-20″ cart=”y” cloak=”y” localize=”y” popups=”y” type=”link” link_id=”695″]t-shirt[/easyazon_link] that says so! I really like one that I found on Amazon. It says “I Work Hard So My Dog Can Have a Better Life.” It’s made by Swift Pigeon Apparel, and comes in sizes small to extra-extra-large. The regular price is $17.95, but they’re blowing them out right now for just $6.99. I guess I know what I’m getting my dog-loving friends for Christmas this year!

Of course there are so many other phrases that refer to dogs that we use in our everyday lives. Al’s only thinking of one right now, though. Poor Al!