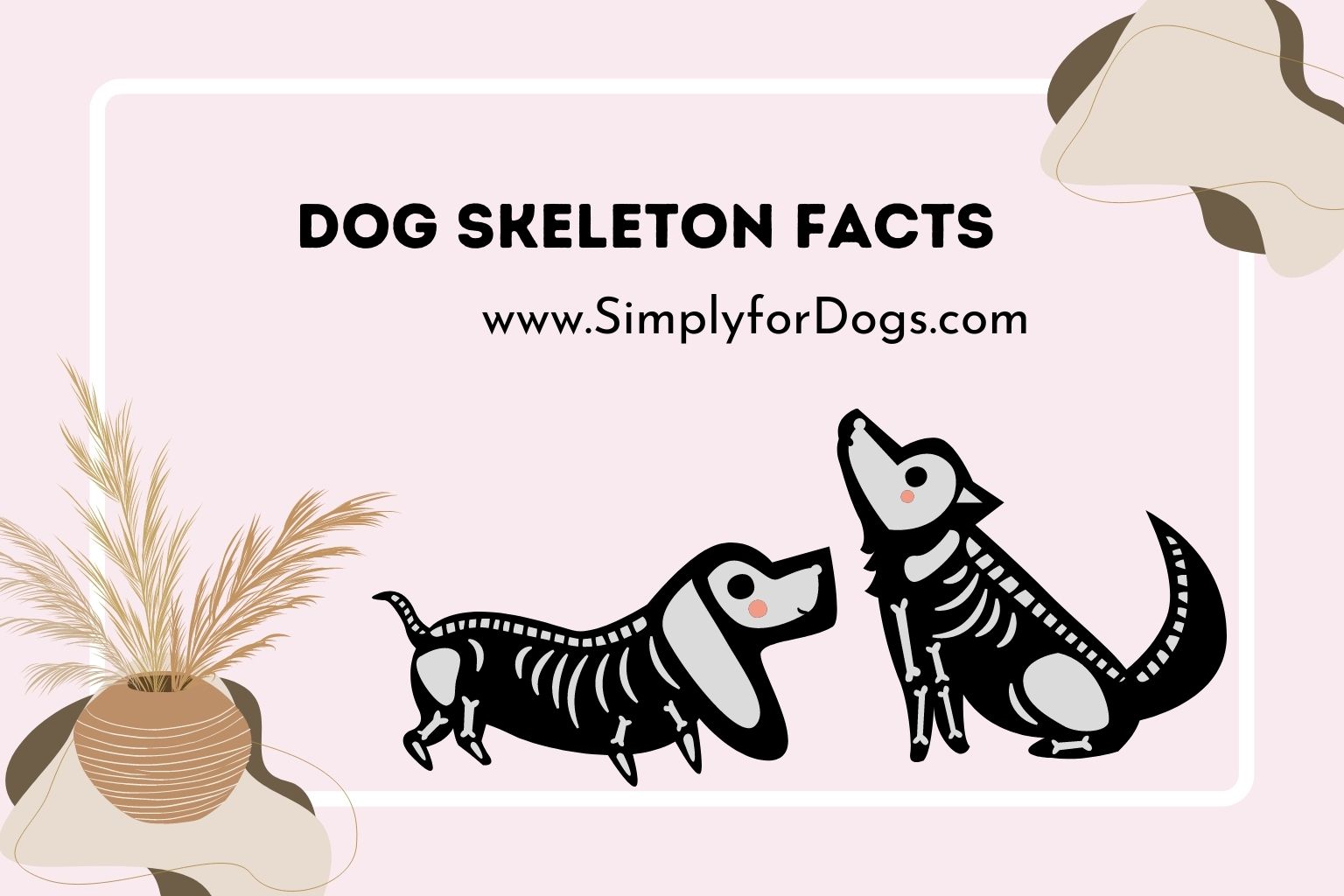 Today, we know more dog skeleton facts than ever before – the basic structure of a dog’s skeleton, and how the bones of the skeleton work together to facilitate movement. We also know a lot about how sometimes, a dog’s skeleton fails to work properly, which diseases and disorders cause poor functioning, and which tests need to be done in order to evaluate certain conditions and identify a course of treatment.

In the material that follows, I’ll attempt to give you the basic dog skeleton facts.If you’d like to learn more, there’s a wealth of information available online, and you should also be able to find materials at your local book store or pet supply store if you prefer printed material.

What, and Where is a Dog’s Skeleton?

The fact is, a dog’s skeleton isn’t all that different from what you find in all vertebrates. It’s a structure that is made up of bones, cartilage, and ligaments, and the whole system occupies the entirety of the dog’s body. Altogether, the dog skeleton is made up of about 319 bones, all arranged in different ways, in order to support different functions. Some parts of the skeleton are in place to protect the body’s organs (the ribs would be one example) while others facilitate movement, and still others work to make red blood cells.

How is the Skeleton Constructed?

One of the most interesting dog skeleton facts is that although there are more than 300 bones in a dog’s body, there are actually only three basic types, forming what are known as skeletal subunits. These subunits are:

Of course, to leave it at that would be to drastically over-simplify. As you could probably guess, although all dogs have pretty much the same bones, they vary considerably in size. You wouldn’t expect, say, a Chihuahua to have the same bones as an English Mastiff, and when it comes to a dog skeleton, the facts are that dogs have the most variety of any species of animal in terms of size, and also the greatest variety in terms of configuration.

What are the Different Classifications of Bones?

Another of the most interesting dog skeleton facts is that bones are actually considered to be organs. Usually, we think of organs as being composed of soft tissue, but even though they’re hard and mineralized, bones are still classified as organs, and also classified according to shape. They are:

What are Bones Made Of?

Bones are comprised of multiple tissue layers. On the outside is the periosteum, which is a fibrous membrane containing small blood vessels (capillaries) which provide nourishment to the bones. The outer layer of bone is firm and dense, and referred to as cortical bone. This type of bone actually makes up a full 80% of the dog’s skeletal bones. The other 20% is cancellous bone, which is mesh-like and spongy, and designed specifically for strength. The center part of the bone is the marrow, which is where new blood cells are produced.

What Diseases Can Affect a Dog Skeleton?

The facts aren’t fully known, even today, about every single thing that can cause skeletal diseases and disorders in dogs, but we do know that most diseases are either hereditary or genetic, nutritional, or due to trauma.

Hereditary disorders are passed from the parents to the offspring. The presence of a certain disorder in either, or both parents, does not guarantee that a puppy from their litter will develop the disorder; just that there is a higher likelihood of it happening. Genetic disorders have to do with the breed background of the dog, and again, a genetic predisposition to a certain condition is not a guarantee that it will occur. Here are some examples of hereditary and genetic disorders.

This is a condition that occurs when the ball and socket of the hip joint do not fit properly. It’s usually thought to be the province of large dogs, but the truth is, any dog, of any breed or size, can be affected. The condition is hereditary, but not easily identifiable in young dogs. It usually doesn’t manifest until the dog is at least a couple of years old, and the dog can be symptom-free or show signs of lameness in the back legs. As the dog ages, arthritis can develop.

This is another genetic condition. It is most common in young dogs of large breeds. It’s an inflammation of the marrow cavity in the long bones, and symptoms can include lethargy, lameness, and fever.

Osteomyelitis is generally caused by a bacterial infection. It’s an inflammation of the bone, and it can sometimes also be caused when fungal infections occur following bone implant surgery, or surgery to place a pin.

This is a weakening of the dog’s bones due to a dietary imbalance, usually a calcium deficiency. It generally occurs when a well-meaning owner believes that a dog does best on an all-meat diet. In puppies, rickets can lead to deformities, lameness, and a propensity toward fractures.

The cause of Vitamin D deficiency in dogs is the same as it is in humans – a lack of sufficient exposure to sunlight. This is one reason why puppy mill animals that are bred and raised in basements or windowless sheds often develop deformities in the bones, lameness, and a likelihood of fracturing.

Trauma is the most common cause of disorders in the dog skeleton, and the fact is that despite your best efforts, there is always a risk of trauma due to car accidents, fights, falls, etc. Whether the problem is treatable or not will depend on the nature and severity of the trauma.

Bulldog Skull Evolution – What Have We Done to These Dogs?
Are Small Dogs More Prone to Joint Disorders?
Dwarf Puppies and Dogs – Are They Abnormal? (Video)

This is something else that can be difficult, if not impossible, to prevent. As dog owners, we can only do our best, with a good diet, regular exercise, and checkups. Sadly, some breeds are more disposed to cancer than others (see Dog Breeds Most Prone to Cancer for more on this topic).

Cancer can occur in the bone itself, or migrate into the bones from surrounding tissues. Large breeds are more likely than small breeds to develop bone cancer. If caught early, radiation and/or chemotherapy may buy some time. If not diagnosed until the lameness becomes severe, amputation is an option, but will usually only extend the dog’s life by a few months.

Again, let me stress that although these diseases and disorders can affect the dog skeleton, the facts that we now have available to us thanks to advances in veterinary medicine suggest that hereditary and genetics are not hard and fast indications that your dog will become ill.

How Do Veterinarians Evaluate the Dog’s Skeleton?

Veterinarians use a number of diagnostic methods and tools to evaluate your dog’s skeleton and get the facts needed to determine if all is well, or if treatment is needed. The first step is to conduct a thorough physical examination, palpating the joints and bones, and observing the dog to see if there is anything that would suggest lameness or an abnormal gait. If something looks off, then the following methods may be employed:

Some disorders show up quite well on x-rays. Depending on the area to be x-rayed, if your dog is reasonably calm and can be restrained easily, an x-ray can be done with no special measures being needed. If your dog panics, he may need to be sedated. Some types of x-rays are best done with the dog under full anesthesia.

In addition to basic radiography, your veterinarian may also do chest x-rays if he or she suspects that an infection, or cancer, has spread to your dog’s lungs. Chest x-rays are also used to identify abnormalities in the vertebrae and the ribs.

Your veterinarian may suggest blood work in order to identify infections or other abnormalities. This type of test can identify abnormalities in the phosphorus and calcium levels, and can also identify disorders like anemia, leukemia and kidney disease that could affect the dog’s skeleton.

If the veterinarian suspects a bone infection, then he or she might collect samples to check for the presence of bacteria or fungi. Special tests can also be used to measure the levels of parathyroid hormones and Vitamin D.

If the veterinarian thinks that your dog might have cancer, osteomyelitis or a developmental or congenital bone disorder, he or she may recommend a biopsy. This involves injecting a needle into the bone marrow in order to extract a sample, which is then delivered to a veterinary pathologist for further examination.

CT scans and MRIs can be used to examine not just the bones, but the adjacent ligaments, tendons, and cartilage. Not all veterinarians perform these imaging techniques on-site, so your dog may be referred to a veterinary radiologist or orthopedic specialist.

With the measures available today, it’s often possible for abnormalities in a dog’s skeleton to be identified early on, making successful treatment more likely.

Bulldog Skull Evolution – What Have We Done to These Dogs?
Are Small Dogs More Prone to Joint Disorders?
Dwarf Puppies and Dogs – Are They Abnormal? (Video)

I hope that these dog skeleton facts have been helpful. I also hope that you have read this post out of simple curiosity and that you will never have need of the knowledge you have just accumulated. However, forewarned is, as they say, forearmed. It’s better to have this knowledge and never need it than to need it and not have it.