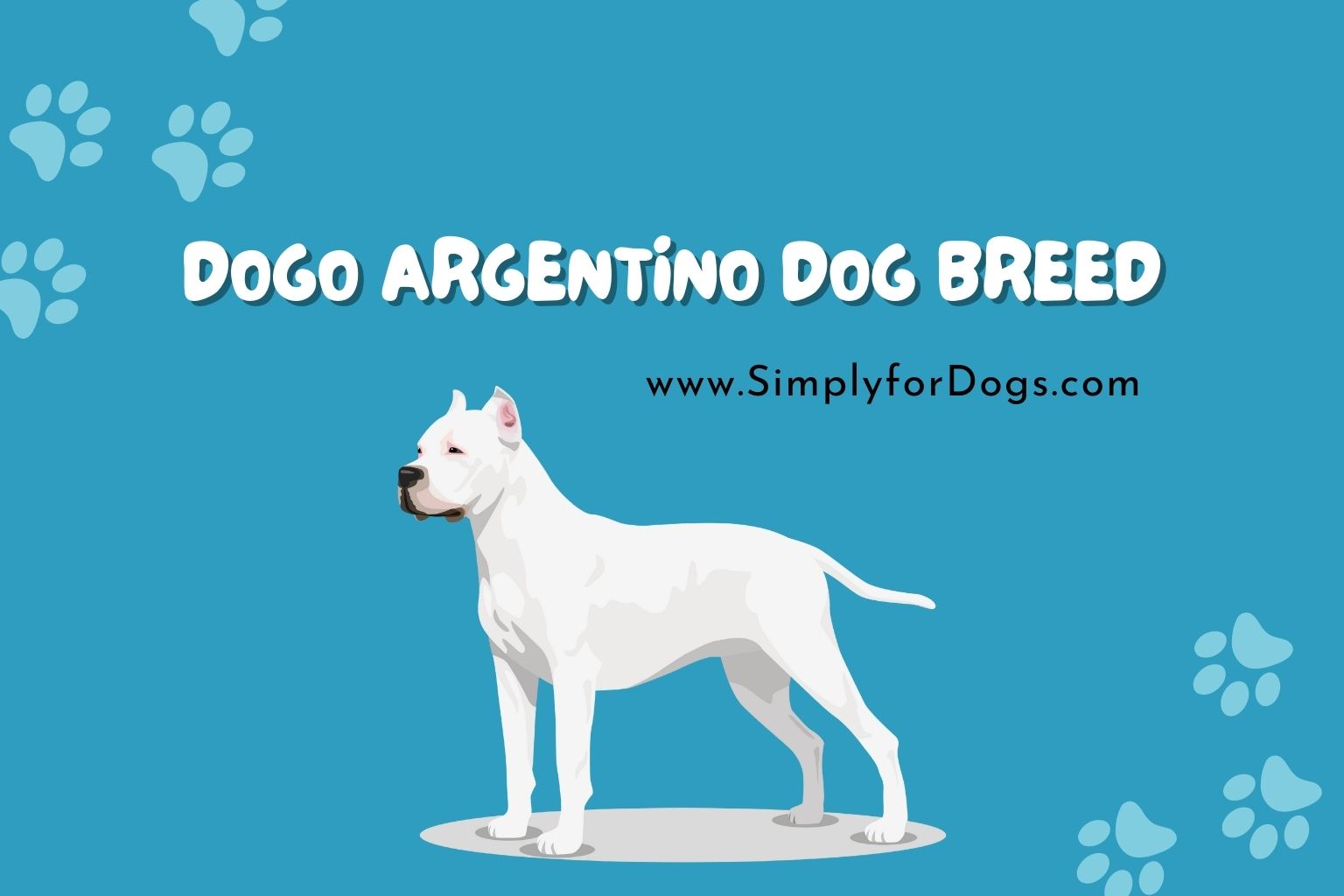 If you are not an experienced, confident dog owner, please feel free to keep reading if you would like to know more about the DogoArgentino, but do not consider adopting one. This breed can be very strong-willed, mistrustful of strangers, and not all that good with other animals. In the hands of an experienced owner, the DogoArgentino can be a loyal companion and protector but if you lack experience you would be better off with another breed. Keep reading to learn more!

The DogoArgentino is a muscular, heavy dog that was originally bred to hunt big game (particularly wild boars). The breed is descended from the Fighting Dog of Cordoba (now extinct) which was, as you could guess from the name, bred to fight other dogs.

The modern DogoArgentino is largely the result of a breeding program conducted by an Argentinian, Antonio Nores Martinez. Mr. Martinez wanted to breed a hunting dog that would also be a good companion, so he began breeding dogs that had less inclination to fight. Accordingly, they could be trusted to work with their pack companions as opposed to turning on them. With Martinez’s dogs, the desire to hunt overcame the desire to fight. To achieve his goal, he used several different breeds, and the result was dogs that had a very solid build combined with a strong prey drive, but less aggression than their predecessors.

On a sad note, the DogoArgentino is still prized among so-called humans who are involved in dog fighting rings.

DogoArgentinos have few health issues. They are, however, prone to pigment-related deafness, which is a condition found in many white-coated dogs. Other conditions that the DogoArgentino could develop are glaucoma, hypothyroidism, hip dysplasia (common to many large breeds) and laryngeal paralysis. It’s worth keeping in mind that chances are your DogoArgentino may never develop any of these conditions. They’re possible but not necessarily likely. Make sure your DogoArgentino has regular veterinary checkups and enjoys a good diet and lots of exercise, and chances are he’ll enjoy good health for many years.

When it comes to feeding, give your DogoArgentino a quality food that’s formulated for large, active breeds. You can free-feed if you like since DogoArgentinos don’t typically eat if they’re not hungry. If you choose to feed at specific meal times, ask your veterinarian for a recommendation on quantity based on your dog’s size and activity level.

As to grooming, the DogoArgentino’s short coat doesn’t require a lot of maintenance. A brushing once a week generally gets the job done. Because DogoArgentinos are white-coated, though, they will show dirt a lot more than dark-coated breeds. You might want to give your best buddy a bath every few months (more if he gets really dirty) but it’s for cosmetic purposes and not essential for his skin health.

Think of it this way. What happens if a badly trained, badly socialized Shih Tzu, Chihuahua or Toy Poodle bites you? Not much. Likely you’ll just wipe off the blood, slap on a bandaid and, assuming that the dog has had his shots, forget about it. If a badly trained, badly socialized DogoArgentino bites you, at the very least you’re going to need stitches. In the worst-case scenario, you could need reconstructive surgery and months of physiotherapy.

Start with the socialization and then move on to obedience training. Socialization is easy – it just involves having your DogoArgentino puppy meet other humans. The more people he meets, the less fearful he will be. It’s also good if you can have yourDogoArgentino meet other dogs since the breed has a very strong prey drive that’s easier dealt with when he’s a puppy than it is when he reaches adulthood.

As to obedience training, you’ll want to start that early as well. Teach your DogoArgentino puppy to sit, stay, lie down, come and walk at heel. Begin training as soon as your puppy is home and settled in. In other words, do it when he’s small. If you wait until he’s an adult, or even an adolescent, you could end up with too much dog to handle.

As of the time of this writing, DogoArgentino prices are all over the map. You could pay as little as $500 for a pet-quality dog or as much as $5,000 for a show-quality dog.

Usually, when I talk about breeders, I point out that although the American Kennel Club makes a practice of warning you away from so-called “backyard breeders,” often you’ll find that breeders of dogs that aren’t AKC registered are every bit as knowledgeable and caring as those that are in good standing with the AKC. When it comes to the DogoArgentino, though, I’m going to warn you away from non-AKC breeders.

It’s because DogoArgentinos are still, in many cases, bred to be fighting dogs. Bad people breed them to be aggressive. If you’re looking for a DogoArgentino, you could very easily come up against a breeder who’s in it as part of a dog-fighting ring, and what he or she is doing is keeping the most aggressive and selling the ones that aren’t quite aggressive enough for their liking. You could still end up with a dog that has a lot of aggression – just not enough to make a good pit fighter.

Canine Aggression – How it Starts, and How to Stop It
10 Dog Breeds Mistaken for Pit Bulls
15 Dog Breeds With Really Bad Reputations

DogoArgentinos are highly loyal and very territorial. This makes them great watchdogs and protectors. They are very active and require a lot of exercise, which makes them unsuitable for living in apartments or small houses. The DogoArgentino will thrive in a home where there is a big yard for him to enjoy.

DogoArgentinos are typically happy, good-natured dogs, but they do require a firm handler. If you’re not comfortable being the alpha in the human/canine relationship, then the DogoArgentino is unlikely to be the right dog for you.

DogoArgentinos also have a very high prey drive. It’s bred into them because of their history as hunting dogs. Because of their high prey drive, DogoArgentinos are not usually good with other animals. They will see small animals like cats and guinea pigs and even smaller dogs as animals that should be hunted down and killed. Accordingly, they do best as single dogs. If you do have other dogs in the home, make sure that they’re also large dogs, and preferably of the opposite sex. Same-sex dogs of any breed will often fight, sometimes even to death. If you absolutely must have large dogs of the same sex in your household, make sure that they’re neutered.

As to children, DogoArgentinos will typically accept those in their own household as valued family members and will be gentle and protective. They might, though, view other children as strangers and potential threats. Never leave a child alone and unsupervised with a DogoArgentino, or for that matter, with any other dog. It doesn’t matter if it’s your child or someone else’s – just don’t do it.

DogoArgentinos have always been bred as hunting dogs. Even today they’re used in packs to hunt wild boar and other big game. Of course, most people who adopt DogoArgentinos don’t use them for that purpose, but it’s important to keep in mind that the desire to hunt is still a part of the dog’s mindset. The need to hunt has also been channeled into police work, military work, search and rescue, and other service work.

How big is a DogoArgentino? They’re considered to be very large dogs, standing between 24 and 27 inches. Usually, the body is a bit shorter than it is tall, and the head is broad and large.

If you’re thinking of adopting a DogoArgentino rescue, think twice. Usually, when a dog of this size ends up in a rescue facility, it’s because of serious behavioral issues. If you’re not experienced with large dogs, that’s a bad thing. If you’re not experienced with large dogs that might really try to hurt you, that’s a worse thing. If you’re hell-bent on adopting a DogoArgentino, though, you could try this rescue site. You can also check out local breed clubs.

DogoArgentinos actually enjoy quite a long lifespan when compared with other large dog breeds. The typicalDogoArgentino will live for anywhere from 12-14 years.

DogoArgentinos are big dogs, typically weighing anywhere from 80 to 100 pounds. Males will usually weigh a bit more than females.

Why is the Dogo Argentio illegal?

It isn’t. Some jurisdictions (Miami and Denver, to name a couple) ban the breed. Overall, though, the DogoArgentino is legal in most jurisdictions.

Any dog that is thrown in a pit to fight another of his kind can be termed a “pit bull.” This would include not just American Pit Bull types, but Boxers, English Mastiffs, Dobermans and almost any other large breed of dogs. “Pit bull” is a type of dog used for a particular purpose – not a breed. However, DogoArgentinos, despite the fact that they can be tenacious fighters, are considered to be “mastiff type” breeds and not pit bull types.

Can a Dogo Argentino beat a pit bull?

Why do you want to know? Yes, sometimes. No, sometimes. No dog should ever be asked to fight another dog, and no human should care who wins or loses – what you should care about is that this happened in the first place!

All dogs are good in the right hands. Socialization and training are what matters, and what makes the difference.

Which is the most dangerous dog in the world?

If you look at simple bite statistics, it’s the American Pit Bull Terrier, closely followed by the Rottweiler. What you have to keep in mind, though, is that these are very popular breeds, and accordingly will have more bite counts attributed to them than you’d find with other breeds that are less popular. What’s really the most dangerous dog in the world, though? It’s the dog, of any breed, that’s badly trained and badly socialized.

What kind of dog is on Ray Donovan?

Have you enjoyed this look at the Dogo Argentino? What do you think of this strong, tenacious dog breed? Is this the right dog for you, or are you going to take a pass? The DogoArgentino isn’t for everyone but in the hands of the right owner, he can be a loving protector and a loyal companion. In the wrong hands, he can be a menace. There’s really no middle ground here, so if you’re considering adopting a DogoArgentino, do your research and make sure you know what you’re doing. If your heart leads you to the DogoArgentino, and you are the right type of owner, then I wish you all the happiness in the world!

Canine Aggression – How it Starts, and How to Stop It
10 Dog Breeds Mistaken for Pit Bulls
15 Dog Breeds With Really Bad Reputations