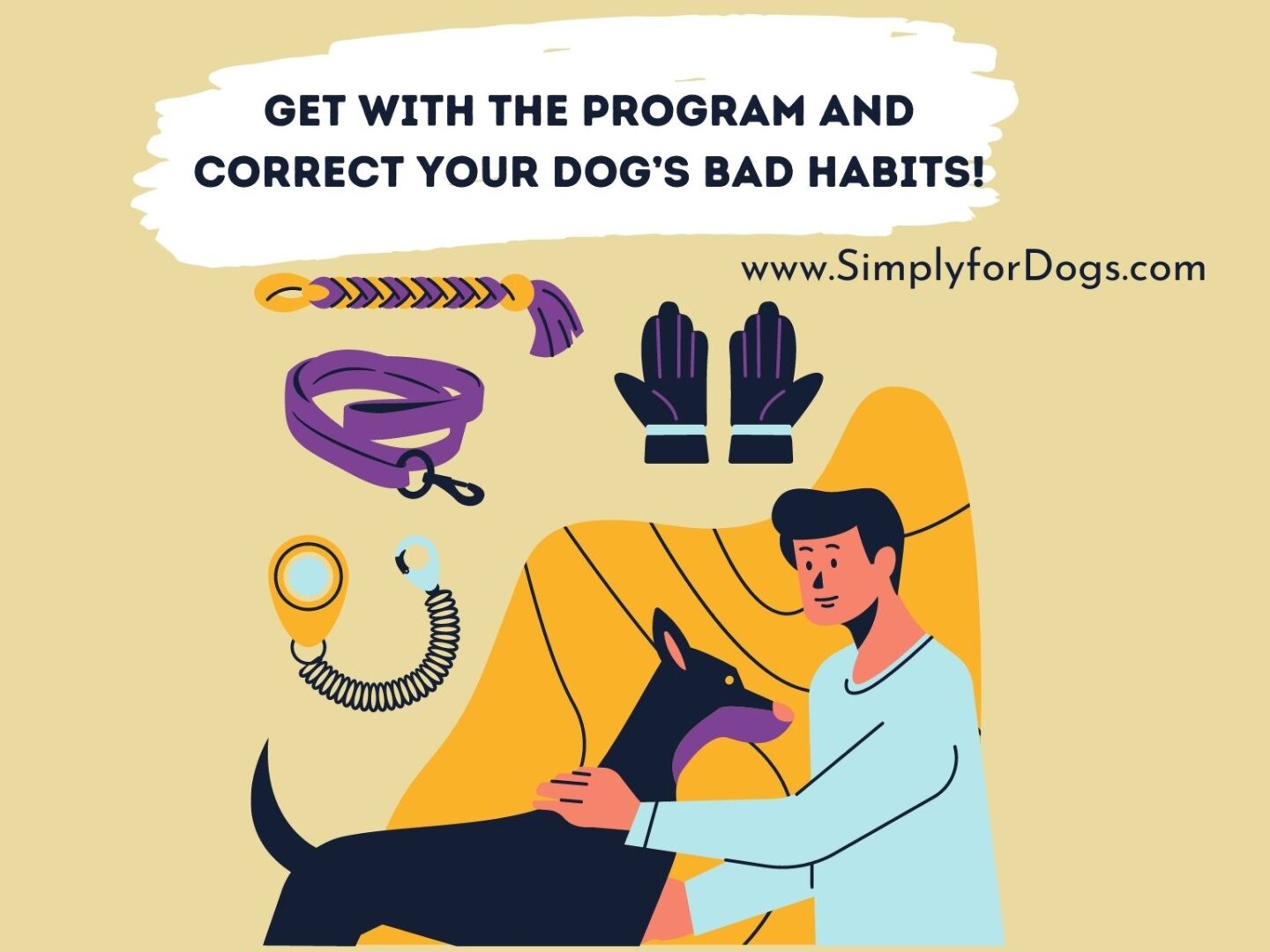 I don’t know about you, but I’ve always had to deal with bad habits in my dogs. Some of my dogs’ bad habits have included counter surfing, barking, chewing, biting, pulling on the leash, and more.

Is there something magical that can stop all these bad habits?

I doubt it. But after vigorous Googling, I have found a method that I think will work for most of your dog’s bad habits.

This strategy is simple, effective, and doesn’t require any harsh handling. It’s also fun for most dogs!

The annoying problems include jumping, pulling on the leash, chewing, digging, peeing indoors, begging, and barking like crazy.

The really bad problems include biting and aggression.

The first thing that you need to do is decide which category your dog’s bad habits fall under.

So first, ask yourself these questions:

Whenever a dog develops a new behavioral issue, it’s a good idea to consult a veterinarian. Sometimes, the problems are due to injury or illness. If you’re saying “He just now started doing this,” it could be a sign of a medical problem. If you’ve ruled that out, keep reading.

This is simply a means of rewarding good behavior and preventing your dog’s bad habits. If you’ve ruled out a medical issue, then chances are that your dog just needs to be taught how to behave.

Think of it this way: what happens if your dog jumps up on a person? You have a couple of ways to react. You could shout “Bad dog!” and cause a lot of stress, or you could just ignore the behavior and tell the person who was jumped on, the next time the dog does that, wait until he sits and then give him a treat. This is stopping a dog’s bad habits in a kind, positive way.

Most of the time, behavior changes when you change the way that you react to the behavior. A dog that’s jumping is just behaving like a dog, and shouldn’t be punished. When he behaves “not like a dog,” though, reward him! It’s just that simple.

How Do You Want Your Dog to Behave?

Obviously, in the above scenario, you want your dog to stop jumping. Treats can go a long way to stopping the dog’s bad habits, but you also want to make sure that he’ll behave in the absence of treats.

Again, the key is positive reinforcement. Keep on using treats so that your dog will get the idea that even if jumping is gratifying, not jumping will be even better! Again, treat, treats, and more treats!

Any time that you reward the old behavior – for instance, petting the dog when he stops jumping – you’re reinforcing bad behavior. He jumps and he gets petted. What you need to do is replace the old behavior with a new behavior – so, if he jumps, yes, you can reward him when he stops. But give him an even better reward if he lies down instead of jumping. “Sit” gets him a Milkbone. “Down and stay” gets him Pupperoni. Your dog’s old bad habits are erased, and he gets rewarded for developing new, good habits. You get the idea.

One of the things you need to know about dogs is that if you’ve taught good behavior, and you’re the only one who’s done it, once you’re out of the picture, the bad behavior is going to resurface. So for the first little while, don’t leave your dog unsupervised. If you do, any progress you’ve made will end up undone.

In other words, don’t let your dog decide when he’s going to be rewarded. If he’s begging at the table, ignore him. If he’s barking for no reason, ignore him. If he’s not getting what he wants as a result of his behavior, he’ll probably stop. Dogs are all about instant gratification, and if they don’t get it, they’ll stop the behavior.

This is where it all comes together. If you’ve been reading, and absorbing what I’ve been saying, then you know by now that what I’m trying to tell you is that you have to be every bit as stubborn as dogs, and you can’t give in.

You want your dog to decide that what you’re offering is so much better than his bad habits. If you do that, using good treats and rewards, your dog is most likely going to do what you want.

Two Steps Forward and One Back

One thing, though, that seems to crop up over and over when you’re training your dog to stop being stubborn and do what you want is what’s known as the “extinction burst.” What this means is that at some point, all your training will go straight out the window, and your dog will become even more stubborn than he was before. This is called the “extinction burst” because what it means is that, just as I’ve said, none of your training matters any longer. In other words, it has become extinct.

This can be the kiss of death for any number of behavior modification efforts.

The extinction burst happens when your dog gets the idea that no matter what he does, you’re in control, and he doesn’t like that. This can be a pretty difficult point when you’re training stubborn dogs, but please don’t give up. Your dog hasn’t stopped learning; he’s just testing you.

What you need to do here is continue being consistent. You need to keep delivering the message that the “old ways” aren’t going to work any longer, and that you expect your dog to adhere to certain rules. You need to be beyond patient, and never give up. If you get tired, or bored, then your dog is going to run roughshod over you.

If you’re looking for a quick fix, it’s not going to happen. This is a pretty simple procedure, but it is going to take time. Your dog isn’t going to go from stubborn to perfectly compliant in a week, or two weeks, or maybe even longer, but if you keep at it, you will end up with a well-behaved, non-stubborn dog.

I know that it’s easy to say, “Be patient.” There were times when I was training Janice that I just wanted to strangle her, but I kept going, and now she’s a wonderfully behaved dog. Take it slow, be patient, and know that eventually all things will work out. My dog’s bad habits were replaced with good habits.

I know that I keep harping on this, but it’s amazing how many people just don’t get that positive reinforcement is vital. If I could scream this into your ears, I would!

Always, always, always reinforce good behavior! It’s so much easier to show your dog what he’s doing right than it is to punish him for what he’s doing wrong! I’ve always used positive reinforcement with Janice and Leroy, and I can say that casting all modesty cheerfully to the four winds, that they’re two of the best-behaved dogs in the world!

Teach your dog that the new behavior is superior to the old behavior. If he’s digging in the yard, get him a sandbox, bury a few toys, and then tell him what a remarkable dog he is for digging in the sandbox instead of the yard! Want him to stop jumping on people? Provide those people with treats and show your dog that sitting politely has a better outcome than jumping.

What I’m trying to say here is that when your dog has bad habits, they can be corrected. It might be that those bad habits are your fault, but even if they are, they can be overcome. What you need to do is look at the cause of your dog’s bad habits, and then work to correct them. It can be done but only if you’re patient.

The main thing is, don’t give up. Your dog’s bad habits didn’t happen in a vacuum, and they might not be corrected all that easily, but they can be corrected. Work with your dog. Try to figure out what went wrong, and correct it. And always, always remember that your dog doesn’t mean to be bad – whatever went wrong can be fixed.