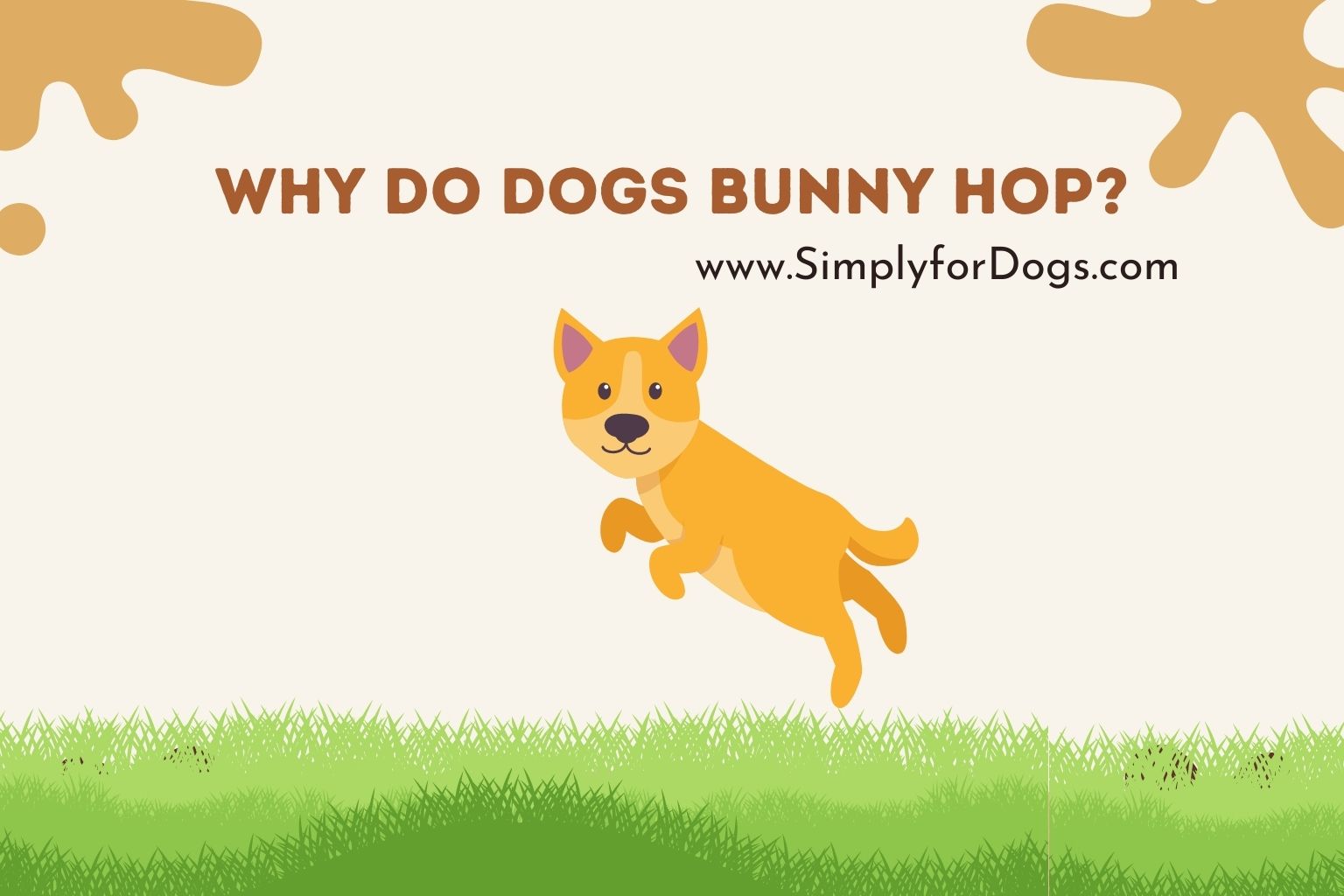 Have you ever seen a dog “bunny hopping”? It’s when a dog picks up his front legs, both at the same time, and hops like a rabbit. It’s cute as all get-out, but why do dogs do it? There can be a number of reasons why dogs bunny hop, and some of them are perfectly innocuous. Others, though, can indicate a physical problem.

No, your dog doesn’t think he’s a kangaroo or a rabbit. He might just be bunny hopping for the sheer joy of it, but if you’re in doubt, it would be in your dog’s best interests to see your veterinarian to get a diagnosis and determine if he needs treatment.

Here are some of the most common reasons why dogs bunny hop.

I have a friend who works as a forestry technician. His job takes him into all kinds of terrain, including not just the woods, but also swamps, grasslands and more. His companion at work is a mixed breed dog named Holly. She’s not a big dog, and often, all my friend can see of her is her long, bushy tail protruding above tall growth. Then, once in a while, Holly will bounce up. She does it quite simply because she can’t really see where she’s going, and a quick bounce helps her to get her bearings.

2. The Dog Is Hunting

Sometimes, you’ll see dogs bunny hop when they’re hunting. Quite simply, they’re pouncing, in much the same way a cat would, in search of a smaller animal like a field mouse or a rabbit.

Dogs also do this when they’re chasing toys in tall grass – they’re mimicking hunting, and just generally having a lot of fun.

Bunny hopping is very common when it comes to puppies. They’re basically trying to get as much speed up as possible. Some owners of puppies refer to this as the “zoomies.” There’s probably nothing wrong. Most likely, it’s just a “cute puppy thing.” Sometimes, though, it can be an indication of hip dysplasia (more on this below), so if you’re in doubt, it wouldn’t hurt to consult your veterinarian.

Remember when you were hitting your teens, and you were the clumsiest creature on the face of the planet? Young dogs also go through a similar stage, where they’re tripping over their own limbs, unable to find their footing and yes, hopping. Young dogs bunny hop simply because they’re awkward, and not sure how to become coordinated. Usually, these episodes of bunny hopping in young dogs don’t last all that long, but if it seems to be going on longer than it should, or if it’s accompanied by stiffness, again, consult your vet. Sometimes it’s hard to tell what’s normal and what isn’t.

When You Lose a Dog, Why Does It Hurt So Much?
8 Awesome Rice Flour Dog Treat Recipes
An Essential Guide to Dog Commands and Dog Training (Video)

In a young dog, bunny hopping is hardly ever a sign of hip dysplasia. It can occur in young dogs, though, so again, be vigilant. In older dogs, bunny hopping can be a way of compensating for pain. In other words, they’re not getting up and down the stairs as easily as they used to, so they hop in order to minimize the impact.

Hip dysplasia can often be present in a dog that will show no symptoms at all. People often think that hip dysplasia is a death sentence, but it isn’t. If the dog isn’t displaying signs of pain, hip dysplasia may not even need to be treated. If it does appear that the dog is in pain, often the pain can be treated with medication. In rare cases, the pain may be so severe that surgery is warranted.

You’ll usually be able to tell if a dog is in pain from hip dysplasia – bunny hopping is one symptom. The dog might also have trouble getting comfortable when lying down, and there might also be atrophy of the hind leg muscles.

Don’t assume that when a dog’s bunny hopping, it means hip dysplasia. Your vet can make a proper diagnosis and recommend treatment.

Another reason why dogs bunny hop is patellar luxation, also known as “floating kneecaps.” This condition occurs when the kneecap isn’t properly situated. Usually, the condition becomes apparent at the age of 4-6 months, and the dog might bunny hop, or run on three legs. Sometimes, the kneecap can be moved back into position manually, but there’s always the risk that it will again shift out of alignment. Sometimes, surgery is needed.

This condition can be hard to identify, and often dog owners think that the reason for the bunny hopping is just cramping, or lameness due to excessive exercise. If the lameness persists, though, you should always be sure to take your dog to the vet.

Dogs may also bunny hop due to soft tissue injuries or neurological problems.

There are few things more appealing than seeing a dog bounce all over the place just because he figures life is wonderful. Most of the time, if you observe your dog closely, you’ll be able to tell if his bunny hopping is due to pain, or if he’s just having a total blast!

Anytime that you’re in doubt, though, please err on the side of caution. I know that I’d far rather spend the money for a veterinary examination only to be told, “Your dog is just having a ton of fun,” than let it go and discover later on that he had a condition that should have been treated.

When You Lose a Dog, Why Does It Hurt So Much?
8 Awesome Rice Flour Dog Treat Recipes
An Essential Guide to Dog Commands and Dog Training (Video)

When dogs bunny hop, it can be for any number of reasons. If your dog is hopping, I wouldn’t panic right away and assume that something is wrong. By the same token, though, you’re the person who is responsible for your dog’s health and well-being, so if you think the hopping is due to something more than just exuberance, have him checked out. A veterinary exam doesn’t cost all that much, and it could prevent a world of pain for your best friend if something isn’t as it should be.